Is this a gay guide to Europe

I saw this on the PBS member drive this morning. Who chose that name? 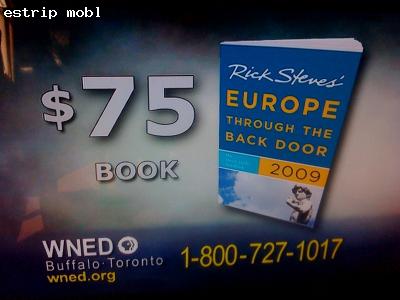 This is actually a gay magazine but it got so much gayer when (e:libertad) accidentally dipped it in the grease and blue cheese drippings from (e:terry)'s chicken hoagie at Jim's Steakout last night. 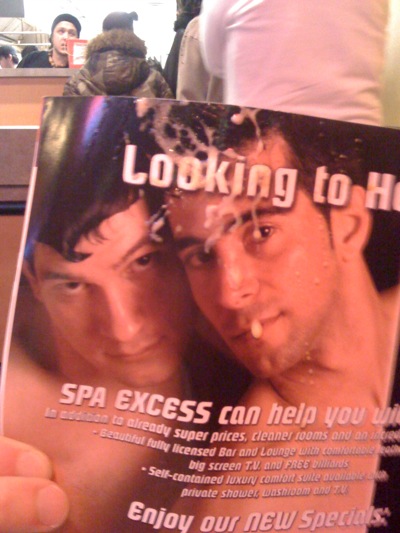 Haha I love Rick Steves! I used his books in Paris, Spain and Italy. I'm guessing that this is not a gay guide to Europe but rather a cheap, less touristy way to see Europe :)

Well at least it doesn't say Greece instead of Europe, HA. I don't know I'm sure they never thought about any thing sexual, well unless of course it is about gay clubs and cities and places that are gay friendly but I doubt it is. Even if it was who would pay $75 for it.

I think my favorite smell on dart is ponderosa lemon blossoms. These ones at the botanical gardens smell do good. A ponderosa lemon is a cross between a lemon and a citron. They are as big as grapefruits.
I searched for candies made out of them but came up empty handed ;
( Someday when I have a greenhouse I would really like this plant. 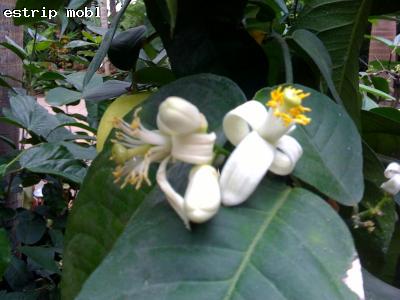 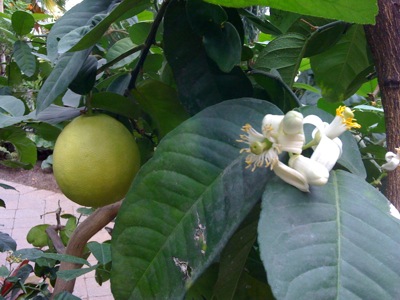 Event the cacti were flowering 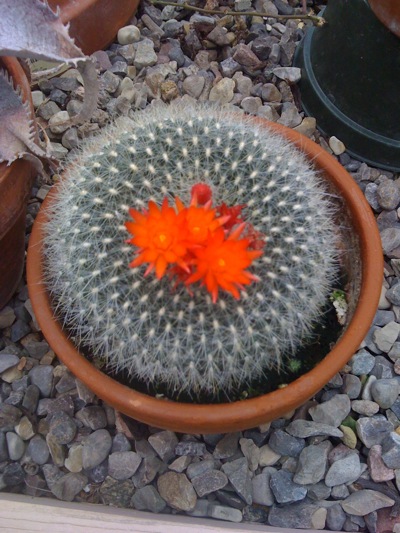 The orchids are always so pretty 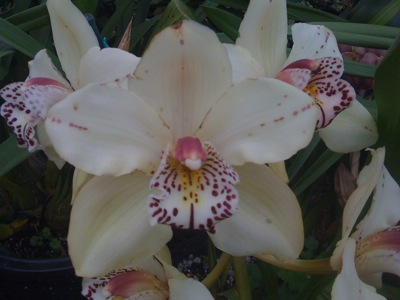 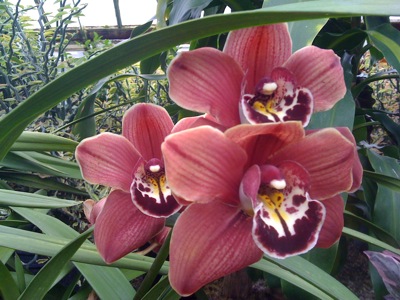 (e:matthew) made me talk a picture of these walking irises so that he could remember there name. 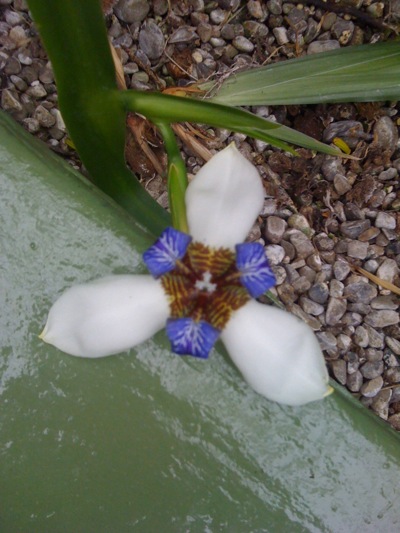 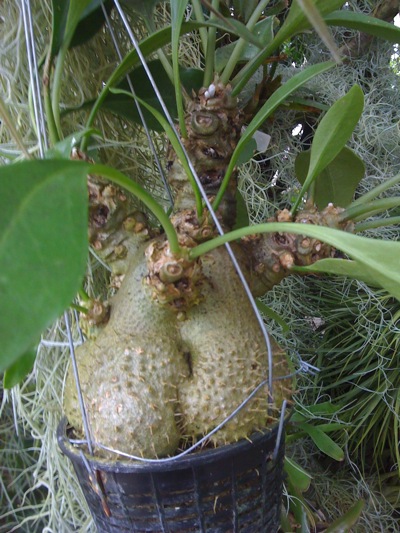 That last one does look like a ball sack but all the other ones look pretty nice.

is it just me or does that last one look kinda like a ball sack?

for anyone who doesn't't gave a rice cooker, they are amazing and
you need one.

I eat rice just about everyday thanks to mine. I am not saying the
one in this pic us good but the price is. Saw it at walgeeen on
delaware and north. 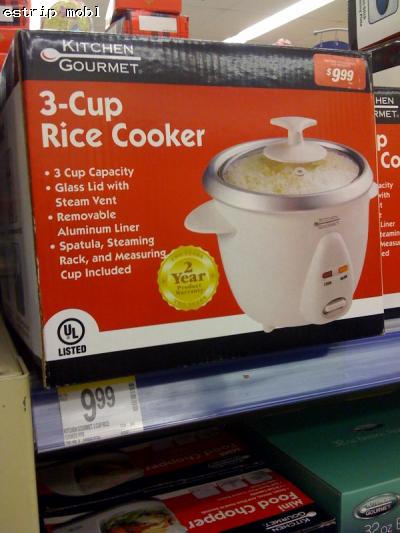 And not all rice cookers are made equal. Hehe. If anyone is in the market for a new one, I strongly recommend Tatung.

My rice cooker has four parts: lid, steamer bucket, bowl, and cooker. Rice cooking only uses three parts. I use it more now that (e:tinypliny) told me what i was doing wrong with basmati rice (best rice in the world) - 1.25 c. water to 1 c. rice, not 1:1.

can anybody ever tell if James is being sarcastic?

I bought a rice cooker at a garage sale but I think I lost a part, or maybe I am just not smart enough to put it together.

James I can't tell if you are being sarcastic or if you really do set your rice cooker so you can wake up to fresh rice.

I used to want a rice cooker but I learned it wasn't that hard to just use a pot so I never got one. The one nice thing is it automatically shuts off when it is done so it doesn't burn it.

My rice cooker is my favorite appliance. I like it even more than the dishwasher. I have a programable one so I can set it up in the evening and wake up to freshly made rice. Super yum.

So, at Wegman's, the wild caught 5lb bag of jumbo shrimp comes to $9.00 per lb which is a great deal. They are beyond tasty. 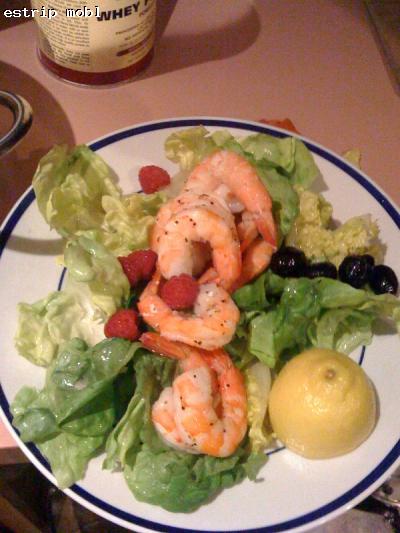 On second though, shellfish + suitcase sounds like a recipe for disaster.

That looks delicious. Send some back with (e:hodown), please.

And now the other one

Her "check" was "stolen" so she has like half the money. We didn't have a lease for her until she paid the first month's rent. Now she is saying its not really convenient for her to have a lease. I think its time for her to go which brings us back to no tenants. Serioulsy, that house is making me bankrupt.

I'm confused. I thought she was evicted already?

Knew I should have looked into it for myself, instead I renewed on Delaware

So after more than a month of missing in action and being evicted, the tenant calls while I was leaving the botanical gardens today to say she is "so sorry about the inconvenience but her baby was sick and someone stole her phone." Serioulsy, think about it, you disappear and stop payng rent and never contact you landlord for over a month. The last time we heard from her was the beginning of February.

She says she will need a couple week to get the stuff out, something about her SSI stopping and having to switch to welfare. What does it take to get one responsible tenant.

Her baby was sick and her phone was stolen? Someone is telling a porkie in my opinion!!!

So many things were happenng on friday. The nice part was getting new furniture. The upstairs looks a lot different now. Best of all, the den is comfortable ;)

While we were at the tenants, cleaning up in the attic we discovered just how much exra junk the last couple tenants left. I never thought to check th eback of the basement. I just assumed that no one had gone down there. Then I found they used it to store old broken appliances. Something I really don't get considering both appartment came with appliances that were of good quality, if not new.

So now in the basement I have so many scrap metal appliances. I hate it. I am sure all the metal is worth money but not enough to have to haul all the shit out. I knew about the old furnace, and two hand crank washing machine from another but not there is a broken refrigerator, a broken stove and a broken washing machine, argh. I also found like 4 probably broken small televisions 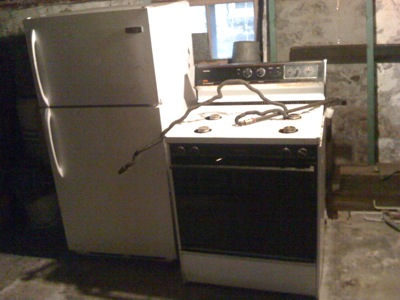 There is just an overwhelming amount of junk with that. I seriously need another two ton day at the dump. Next time all of our stuff is pretty much out so it will be easy to see if anything is left by tenants.

There was also some sort of garbage dump going on in the backyard, which is especially weird considering there were two empty ultra large size garbage totes.

It was filled with bags of diapers and stuff which cats or rats decided to pull apart. Fun. People are such scumbags. 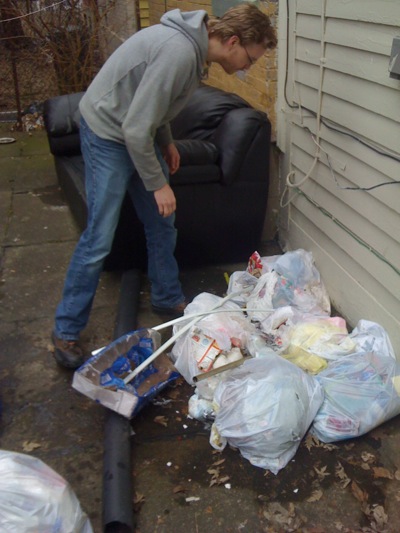 Next step, now that we won the eviction proceding: we get to go pay the City Of Buffalo $105 to have them officially tell the missing tenant who abandoned the property, that she is out by pinning anotice on her door. Why that costs $105 is a mystery, considering she is no longer there. If we don't pay its not yet official.

After she is offically evicted, we get the pleasure of changing locks and cleaning up her ton of shit.

The best part of the whole thing was my aquisition of baby jesus in a coffin. If animatronic, old school style with a wind up key. 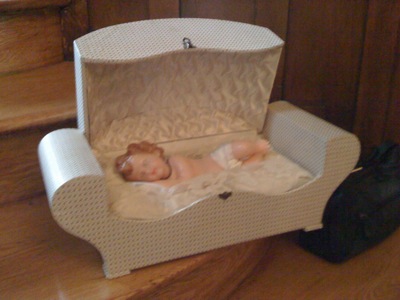 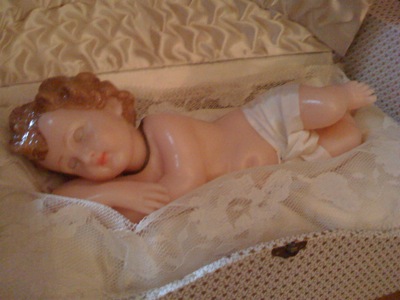 Wait - you said you could wind it up? What does it do? Wake up and dance??!

Hehe - that is a weird thing to have.

i was wondering when you were going to post about jesus in the coffin!

Now it's blockaded with concrete

They finally put up a real blockade as people kept walking in front of it, which I am imagine was extremely dangerous.

I wonder if it's going to be rehabbed or demolished. Honestly, at this point I don't care either way so long as it's dealt with. I mean seriously , how long can it stay like this. I mean I live the facade but I think it's ridiculous to let it just collapse into the street.

On another note, my bosses boss announced she is leaving. I hope the
new person is awesome. 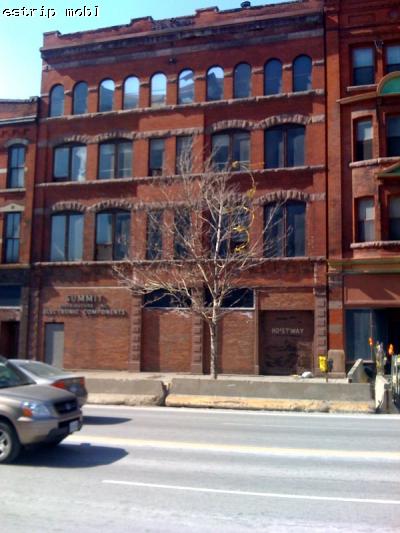 Yeah - I wanted to ask you about it but forget. Did she resign for a purpose or just decided to up and leave?!!

So we are at court today to evict one of our tenants who doesn't live
there anymore and hasn't paid rent in months. The thing is she left
lots of stuff in the apartment and you can't just remove it without an
eviction proceding. If she actually shows up i might end up on court
for something else, lol. It's not just inconvenient, it costs money
to evict someone. The thing is if this ever happens again it is no
longer a mystery process and I will jump on it sooner. For example
with our new tenants that have not paid march rent yet - what the fuck!

So our sheet says the court case is at 9am but now that we got here
the courtoom we in in actually says the court opens at 9:30. Thanks
city of buffalo?

The real problem is that at 8:30 we put one dollar in the new style
parking meter. But now, because it's just a printed receipt instead
of a meter, there is no way to add time until later. I find that
super frustrating. You should be able to feed you old receipt in and
add money. 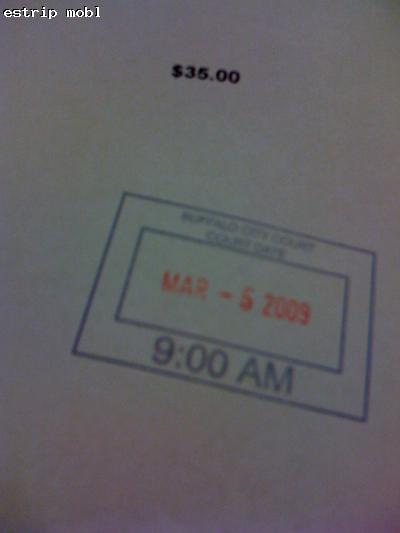 Eviction be damed... that picture is worth a million bucks...

If you're not busy Sunday night we should hang. I'm getting Drupalized proper right now.

Hmm - so in this sense was Saddam Hussein 'evicted?' LOL!

Okay, seriously it's almost 10am, everyone is sitting in the court and the judge hasn't even shown up yet. Sidenote: for anyone getting evicted, they have free legal service for you. Our tenant hasn't even shown up. Maybe I should just file a missing persons report.

ugh, murder should be a legally acceptable form of eviction.

is throwing a party at Circa on March 29th. For once all the stars line up. A huge club, my favorite DJ - Andy C

, a night I can go. I bought myself a ticket and one for (e:terry). I am so freakin excited. Also on the lineup Mystical Influence. I freaking can't wait it is going to be so awesome.

On these recordings you cannot hear the massive bass which is the most amazing part. You know those cars that hum with bass, this is like that x 10,000. The bass actualy shakes your body. Its such a great feeling. 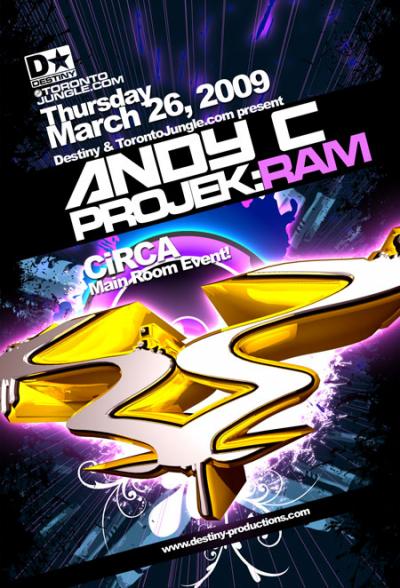 So how much were those tickets? Guessing widly at $60 american or so?