Update on the homefront 2

First of all it is Terry's 24th birthday which makes me feel really old. Happy birthday T. I didn't get him anything because he refuses to let me spend our money since the financial crisis otherwise known as 2003. We are having a party though at the old 567 so stop by tonight my friends if you read this which you won't. i don't even know why I pretend that anyone even believes in elmwoodstrip anymore.

So on the computer front, I decided I am going to start updating this site at some point soon. I am just super busy with grad school reserach at this point. I finally got aproval for the second life class I always wanted to teach bringing VR together with education on a web level. My students are pretty cool this semester. The best part is they all have home computers for the first time. That definately says either somehting about the current omnipresence of technology or I have a group of serious computer dorks. Could be either way but definately seems like a promising group.

Right now I am locked up in a lab at UB reading aboout the development of Virtual reality for this presentation I have to give next Wednesday. I am kinda freaked out becaus eof the time constraint. I have to give 1 45 Minute presnetaion but I guess thats not a big deal considering I teach a three hour course on Tuesday nights and God knwos I like to talk. Well, I must get back to work... I am going to write more often I hope but first I have to find to update the code to do what I want it to. We will see. I might even go back to the dtabase oulling xml files instead of having all the entires in the database itself.

We are now in Vegas

So I was working on the site and also developing my character for secondlife and there.com when I became distracted by the west coat. It is rare now that I have any internet access so I really have been wireless, but in a different way then usual. I guess no one will even believe we were out here because we once agin have taken no pictures. A habit that started with my trip to Africa in 1995 and has prevailed since then. It seems I will never end up having any pictures except those people send me.
We are staying with Terry's family while we are here.

Although I miss the ocean and the beach the warmth of the desert feels kinda nice. Plus we get to go climbing.

>>update March 2004
We finally got our film developed from the climbing trip. We climbed up this giant cliff. Here is a link to some amazing arial photos of the place.

Once we got to the top we stripped naked and ran around like headless chickens. It was some weird little city white boys sense of what is like to be a Native American. 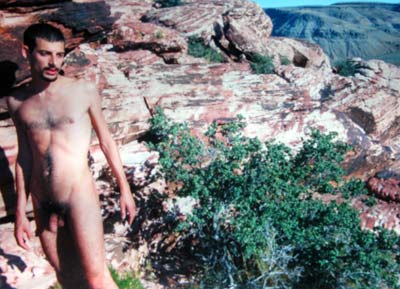 Here is a picture from further away so you can see just how big the rocks are. I am circled in red. Its like a "Where's Waldo" Teryr is there too on the left. 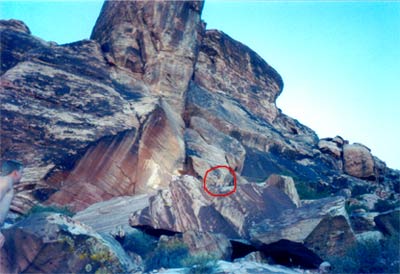 Here is a picture form the top of the mountain. 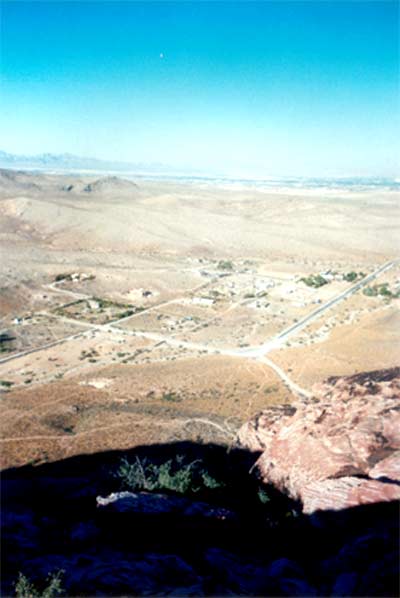 Here is a picture of matthew at the same place. There are naked pictures of him here also. They are on his journal somehwere I think. He is the only man on Earth to use photoshop to reudce the size of his penis. He was embarrased of being the "king of the hill" I guess. 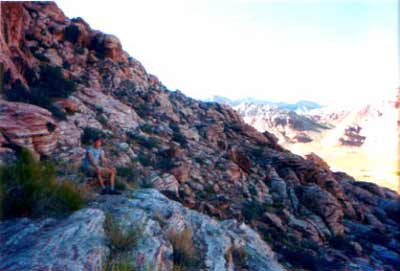