I was watching a couple minutes of the Geraldo show about sex offenders that escaped from New Orleans. I noticed that in the computer screen at the police station they were using google maps to track them.

As part of my gain weight plan, I went to Jimmy Mac's with Katie tonight to eat one of their death inducing bacon cheeseburgers. Once again we were the only diners in the place. I don't understand why this place is failing. Now I know that it is a Monday night but it seems really strange. Katie thinks that it is because it looks too fancy on the outside. (e:terry) says it is because their sandwiches cost $1.00 too much at $8.50. I honetsly thing that the price is not bad considering that it is a 3/4lb burger and you get an insane amount of giant fries and a pickle. For that much food you would spend the same at Wendy's.

Katie seemed pretty excited that (e:matthew) has awaiting list of 12 kids for the day care center they plan on opening.

So I had the interview at Roswell today. I think it was very successful. The job sounds fun and challenging in a good way and it's all about reducing paper in the workflow, which I am all about. I am so into web application development. Especially since AJAX makes the web so much more fun to work with.

I really think that soon, most applications will move toward web-based solutions. It would be cool to make a web based operating system. Maybe next year, haha. Wednesday night I am teaching xmlHTTP with Sherbert 1.0. I have a couple fixes to make before class but I think it will be a great introduction to AJAX.

One of the guys who interviewed me and who would also be my prospective boss is the husband of a childhood friend who I haven't talked to in a long time. So even if I don't get the job I at least get a chance to reconnect with an old friend, who I haven't seen in about four years. Guess who it is (e:iriesara), it's Chrissy Galla.

On another note, (e:lilho) cut my hair last night for the interview and about an hour before it was about to begin she calls to ask what I am wearing. I told her brown pin stripe pants, a sweater and a suit and she said, "You are never going to get the job without a suit." Nothing like getting totally stressed o ut just before you leave. I think it worked out ok without one. Maybe with this job I could afford to finally buy a nice suit!

Glad the interview went well. I am hoping you will be able to buy that nice suit very soon! Good Luck!!!

I think I knew that Del worked for Roswell - She mentioned that to me when I saw her in August. Anyway, I bet it's in the bag now! 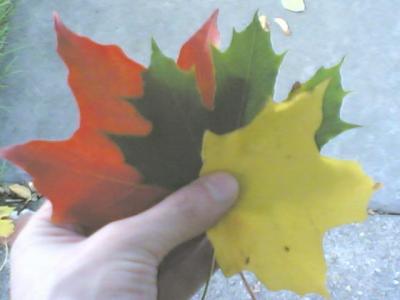 It was such a beautiful fall today. I will be sad to see it end.

Yesterday I needed shrimp to make pad thai before the party and I didn't want to drive all the way to Wegman's. I decided to check out Latina's the new grocery store that is where quality used to be by North and Elmwood. It has pretty much everythign you need at a grocery store although it is no Wegmans. It reminds me of the grocery stores throughout the rest of the country. The prices seemed reasonable too. 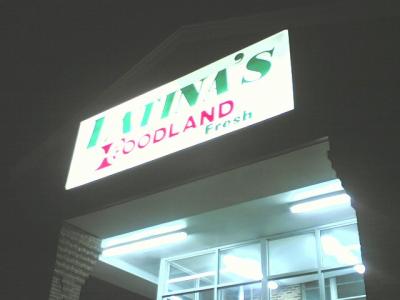 It was yummy and about 1000 calories which fits nicely into my gain weight plan. 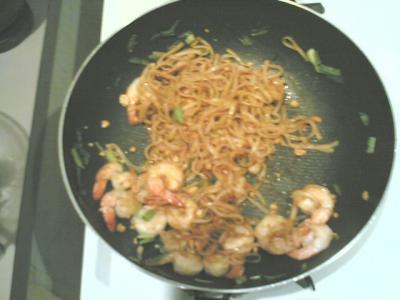 (e:flacidness) dances eternally on the internet.

(e:jason) and (e:joshua), I for one am not suggesting that the lefty press is any less biased. I don't think there is any such thing as unbiased media from any source, how can we pretend that is even possible. I always assume everything is biased and try and research stuff myself when I am interested enough. It is just so unlikely that writer can divorce their ideas from their writing enough to be unbiased, even if they really think that is what they are doing.

As for the Twelve Tribes, my feelings about them had nothing to do with Michael Niman. I don't even read his column. In fact, some drunken random girl read us the article out loud at Allen Street hardware one night. The name sounded famialiar so afterwards, I decided to go home and look them up when I realized they were the same people I had gotten into an argument with at that picnic I organized.

Then (e:mike) and I searched for their personal homepage and read the whole thing. We searched for information from former members and for news articles about them. I put all these links on my journal [inlink]paul,3949[/inlink] with my own commentary so that people could not only read my not very interesting opinion but could more importantly read the source materials and decide for themselves. I think that is what makes this format superior to print articles.

I didn't like The Twelve Tribes when I first met them on a purely gut level reaction and haven't bought their bread since 1995, about 10 years before Mike Niman wrote this article .

Nah you are honest, and I know the reasons for your suspicions of 12 Tribes. I don't dispute their creepiness!

Introducing Paul Visco's Sherbert - An easy to use AJAX API 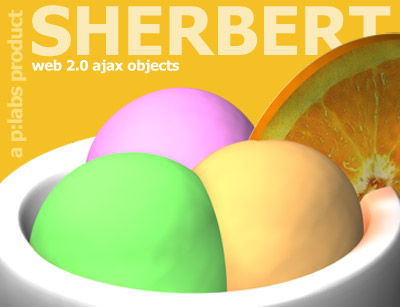 I decided that I was sick of depending on an external AJAX xmlHTTP object API. When I first started using AJAX on the site last year I used my own xmlHTTP scripts but soometime thereafter I picked up an XMLhttp API called CPAINT. Last night, I decided there were lots of things I liked about CPAINT but that I didn't need many of the lines of code it was using and that it would be good top just make my own API. It was also the last little snippet of code that wasn't my own out of the thousands of lines that make up (e:strip) and related projects.

, which will be expanding shortly to include links to many new AJAX applications including the site sound chat. 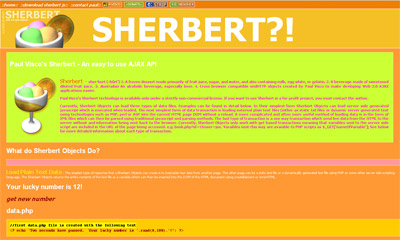 [inlink]joshua,73[/inlink] My gut reaction to them was that I didn't like them having nothing to do with Mike Niman or the coop. It goes back to 1995 when I hosted this big vegan picnic/meeting at artpark and they showed up to get their religion on. (e:hodown) and I didn't hit it off well with them as you can imagine, (e:hodown) asked them to leave, and they left.

Here is their official site

and some official quotes

What is your stance on homosexuality?

We do not approve of homosexual behavior. We do not regard it as a genetic variation, a valid alternative lifestyle, or a mere psychological quirk. We embrace what God says on this subject without regard for political correctness. Homosexual behavior is immoral and can be mortally dangerous.

Not a big surprise for any religious fanatical group but it does make me hate them with the same passion I have for fundamentalist christians.

We desire to speak proper English, free from slang and vulgarity, in the midst of every audio and visual stimulus to the contrary flooding our senses.

Quoted from: The Twelve Tribes : We Make No Apology%u2026

Gee - what do you think this means when translated.

Do you spank your children?

Yes, we do. We love our children and consider them precious and wonderful. Because we love them we do spank them. ... When they are disobedient or intentionally hurtful to others we spank them with a small reed-like rod, which only inflicts pain and not damage....The Columbine tragedy in particular points to the potentially terrible consequences of children left to themselves, who are not held accountable for their actions.

Here is a site that people who have escaped made

You can also visit their storeon South Creek in Hamburg (MAP TO: 327 BUFFALO ST) There commune is somewhere around 18 mile creek.

Maybe (e:Jason) is too young to remember Jonestown...

At my picnic, they searched us out and were preaching at us in our space. I hated that, I guess it just left a bad impression.

I found the art voice's attack on them to be childish. They are just as hatefull as a hundred other groups in this country (Fundamentalists Christians/muslems, KKK, Conservatives, the official Def Leopard fanclub) but the difference here is that the 12 tribes have relativly no clout to speak of. Would the art voice be ballsy enough to attack the Pope? Na...

oh, and their movie reviews are dry!

I think it means exactly what they say - they are for the use of regular language without slang or vulgarity. Do only blacks use slang? No, of course not. Do only blacks use vulgarity? Again, no. Is slang or vulgarity ONLY in english? I use slang and vulgarity all the time. So do most of us. It doesn't take too much to turn on the TV or radio and hear all kinds of people from various demographics demolish language.

I was busy working on a new AJAX system when I tried to download the new iTunes. It is 33MB and downloaded in a couple seconds. At one point I get 4000k/second! Those speeds seem so crazy. Imagine if the whole internet was like that.

Someone has rewritten super mario brothers as a DHTML javascript application. It is so crazy. It is actually quite playable. Spacebar is jump, the arrow keys move. Check it out 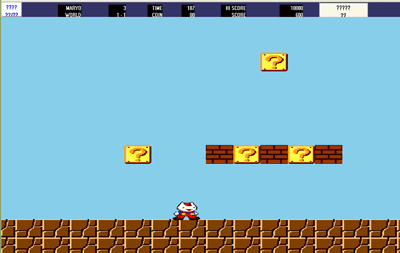 looks good, but I can't read japanese. so I can't figure out what to press to start it. that must have taken some work!