It was Sameer's last day at Roswell. I was so sad to see him go but he got a better job. Can't blame him.

It must be exciting to just wake up the next day and have none of your work problems be your problem anymore. 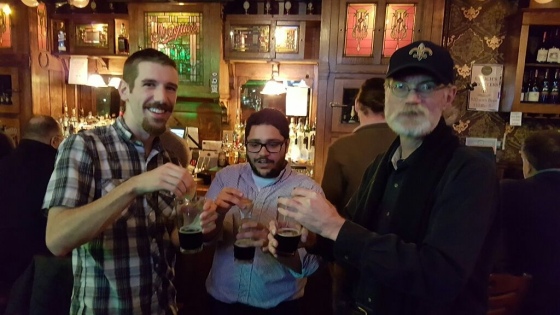 I went for my final follow up on Friday and I now have 20/15 version which is really awesome. It seems impossible that I didn't look into this before. In the last ten years, I surely spent more on glasses and contacts than I spent on this, not to mention the annoyance of all the lost glasses emergecies like swimming last summer at jabe pond when my glasses fell down into some large rocks about 8 ft down.

(E:terry) copied me and got LASIK yesterday too. Now we all can see. 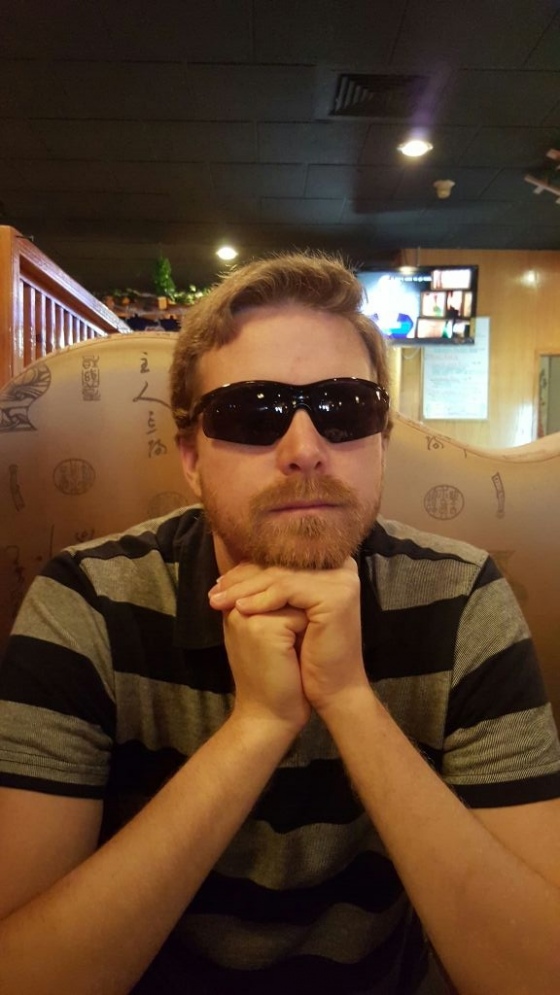 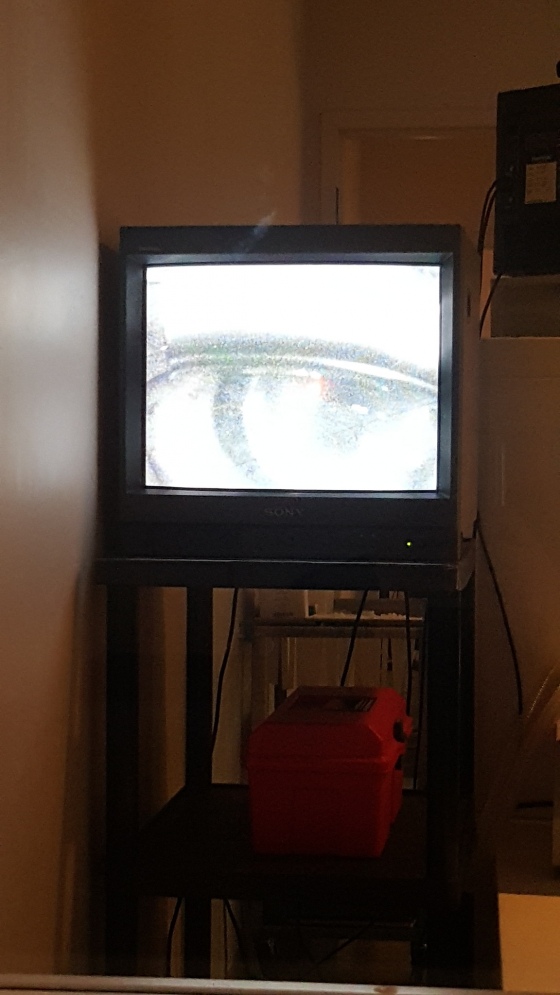 Omg! I need to know everything because I need lasik too.

Okay it's not as cute as (e:Matthew) would have made it but we did a good job. Repaired all the trim, built new trim, painted, repaired and hung the yellow glass lamp, screwed in curtain pulls, new curtains, etc.

It's like getting a new apartment inside the house. 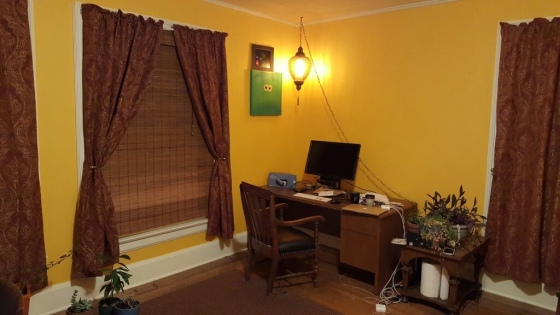 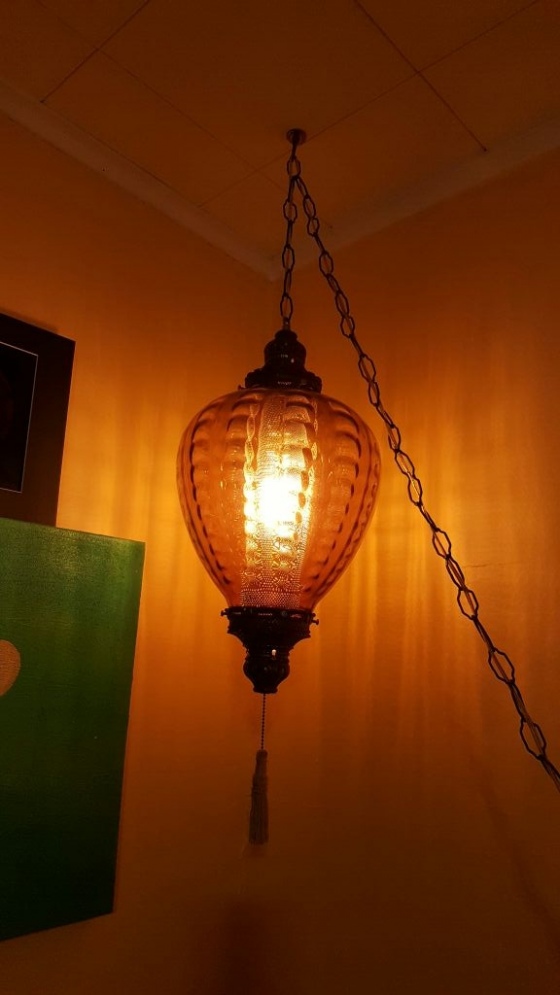 The room looks very nice! A nice shade of yellow will be great with all the light that room receives during the summer months. All the walls where I'm living are painted white. It was kind of refreshing when I first moved in but I think I'm getting bored with it already. Ah well.

The worst Christmas gift was a cold. I got sick for a week with a stupid chest and head cold. It sucked. I mostly slept and worked non-stop to locse our year end projects until New Year's eve.

So sad I missed New Years Eve dinner at my mom's. Instead we were at a camp out in Alleghany. The camp out was really fun and the people were interesting. I was happy the cold was ending. One night there was a cabin dance party that was awesome till I found that I was allergic to their cabin and almost died of an asthma attack. Luckily (e:heidi) had a rescue inhaler I could use.

To some that up, a lot of whiskey and beer, a lot of campfire, campfire stories, eating lots of good food, spending a lot of time wrapped in blankets, unexpected hetero sleepover frolick.

I didn't really get any pictures. None of my devices were on network so I just left them in the car. My Note 5 was still locked to AT&T because they couldn't get their billing in order, my Verizon iPhone 6S Plus didn't get service. I think it was the longest I have been without cell phone service and data since 2003 when I got my first sidekick minus Jabe Pond Adirondack summers and Cape Code. It was a combo of nice and stressful. On one end I got to focus on talking to new people. On the other hand I was terrified there would be a work emergency. There wasn't.

So much stuff happened in the last 12 days. I have been so lame about posting. Part of the time I had no cell phone.

First there were the christmas holidays. (e:terry) left (e:joe) and I and went to Florida. We were sad, I was jealous too. (e:joe) hates warm weather so he wasn't as jealous. Luckily, it was insanely warm here. I think we even hit 60 degrees.

I got a new hat. I love my new hat. Unfortunately, right now it smells like a camp fire. 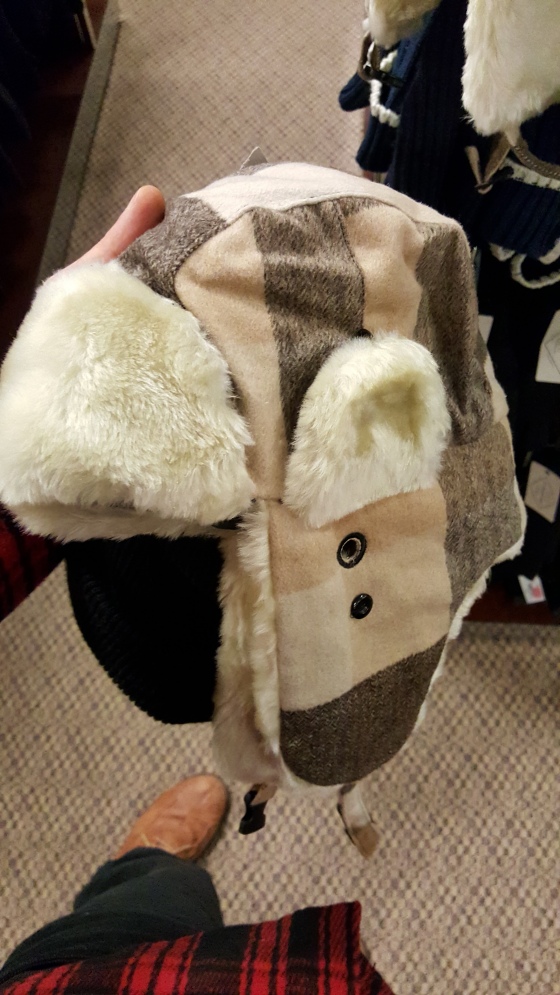 We ate a lot of food at Christmas Eve and Christmas Day. I wish I got pictures of the finished plate. 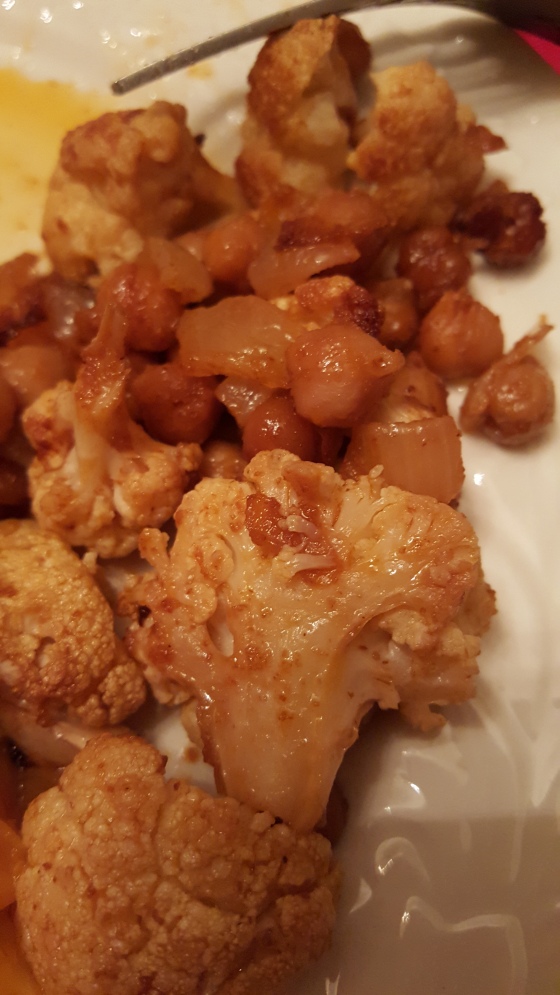 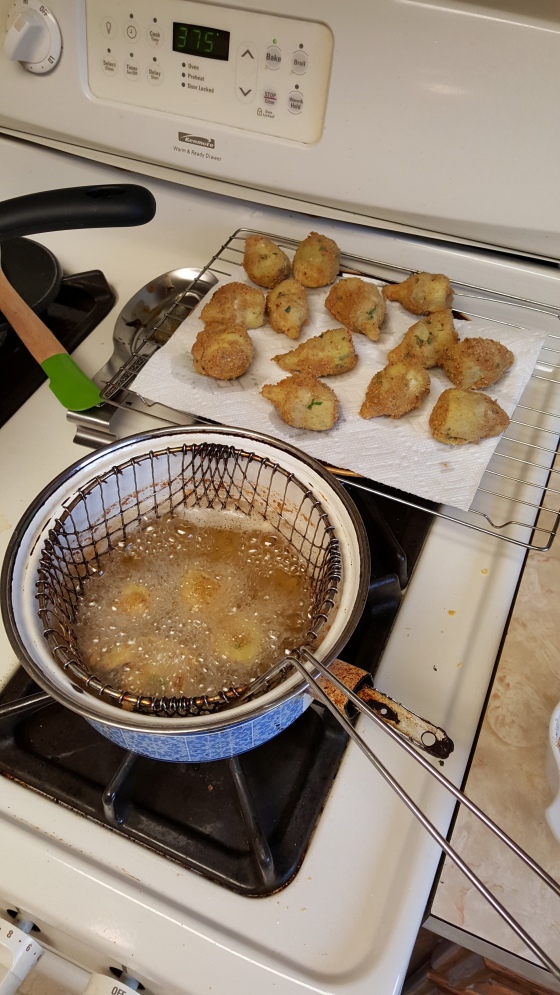 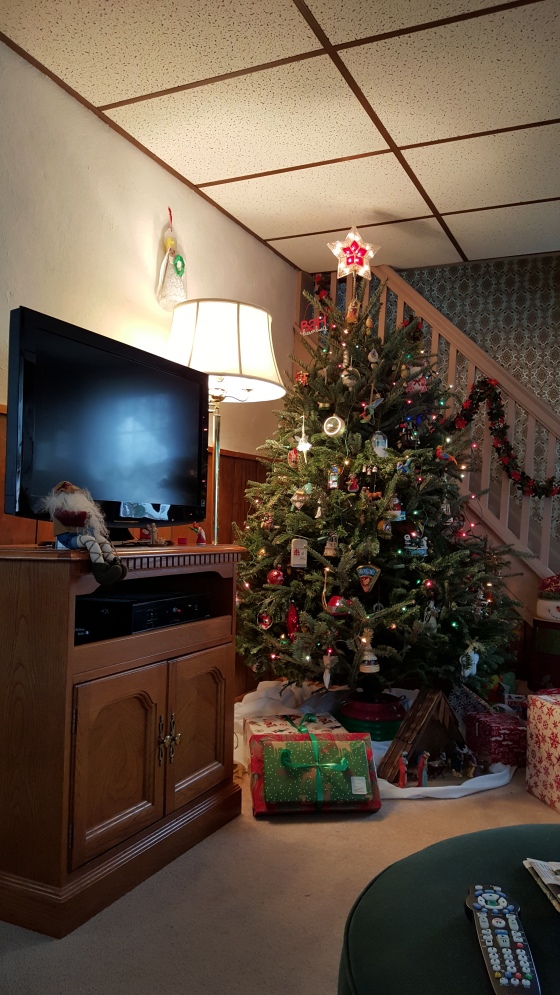 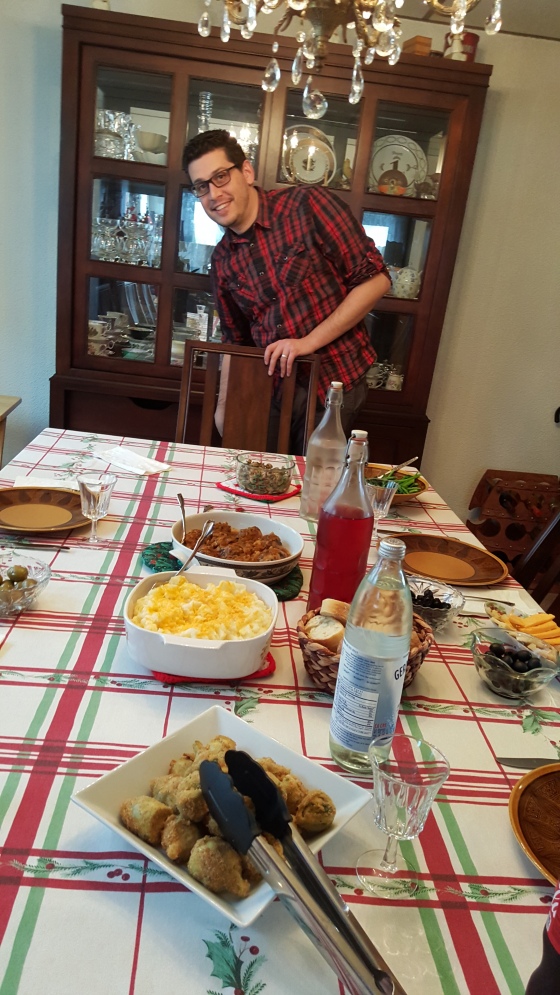 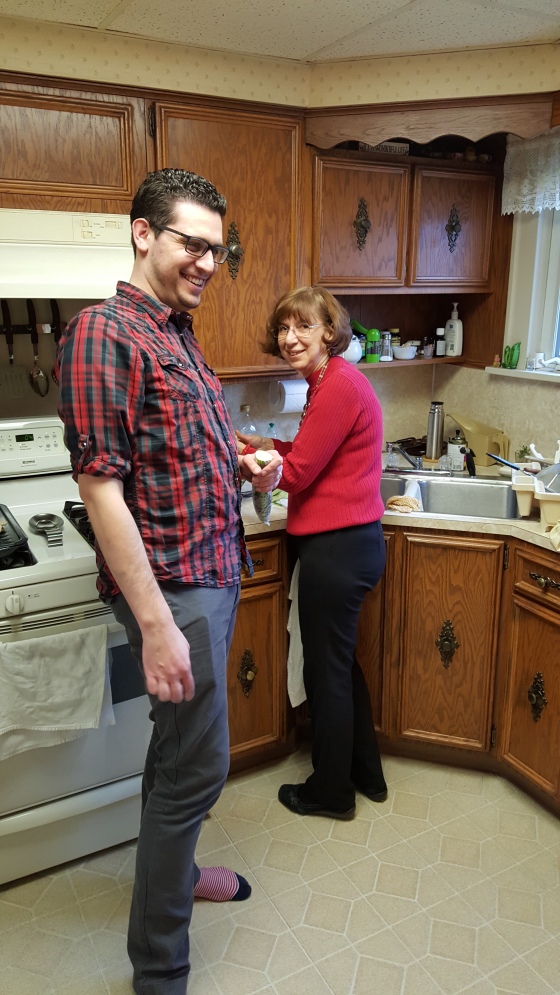 Got so many gifts. A cake tray, a clothes steamer, vegtables spiralizer, a stainless steel rice cooker, a bed in breakfast tray.

We switched to T-Mobile from AT&T. I hated AT&T, the customer service department was friendly and quick but they would make up any story. I repeatedly had issues where I talked to 2 or 3 representatives that each had a different story.

Before we left AT&T, our family of 5 (me, (e:terry), (e:joe), (e:yesthatcasey), (e:xandra)) was paying over $300 every freakin month. Some months closer to $400. The $36 for a family text plan was the most ridiculous because almost no one texted anymore but it was an insurance in case someone did because it was otherwise $0.20 per text and $0.60 per MMS.

When we heard they were going to up the cost of our grandfathered unlimited plan we decided it was time to just ditch them. I also wanted to add my mother to the account as we got her a phone for christmas and I couldn't stand the thought of the bill going higher. Their shared mobile data accounts didn't work for me either. I wanted everyone to have their own amount of data so no one could hog it.

T-Mobile had a special and for $160 we got 6 lines unlimited talk, text and 6GB of LTE data. The speed is really fast. Even faster than I had with AT&T. Sometimes I think all the iphones of AT&T made the network slower. I remember before the iphnes were LTE it was much faster.

Anyways the best part is that we can use it in Canada. Living a 15 minute walk from the Canadian border. Even just swimming in Fort Erie it was such a pain in the neck that we had no service. I think this will result in me traveling to Toronto much more.

I hated going to Toronto and being in the dark of having to go from sketchy wifi hotspot to the next in order to contact the people we were with or get directions, etc.

Here is the speed from my neighborhood in Allentown in Buffalo, NY. I spend 90% of my life here so that works for me. 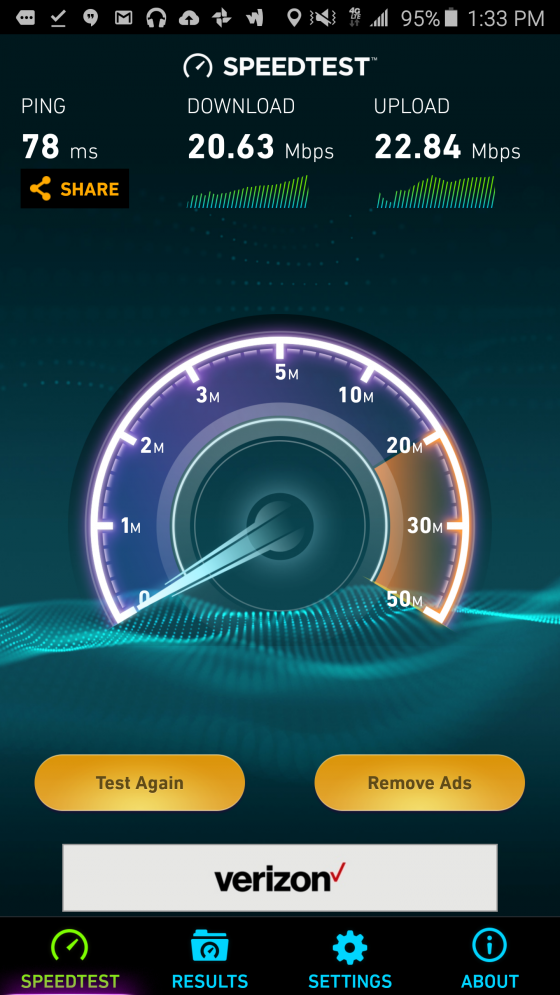 (e:joe) had a T-Mobile phone over the weekend when we were camping in Allengheny State Park. I had a Verizon iphone 6 S Plus. His phone had service and mine did not. So much for the "its only in the city" that you always here.

The thing I found most frustrating about the move was AT&T holding my Note 4 unlock hostage for a week and not even being able to produce our final bill yet so that we can unlock our AT&T phones. I got so sick of it I just bought a new T-Mobile Note 5 (gold) and decided to just sell the AT&T one when they get around to unlocking it. AT&T and Verizon Note 5s can't be rooted or flashed with another ROM. The phone basically destroys itself so by switching you end up with a phone that can never be upgraded - ugh. I wanted the gold one anyways ;)

After that experience I never want to step foot in a cell phone store again.