NEW YORK - New York officials on Wednesday unveiled a new plan for the Freedom Tower at Ground Zero, saying the 1,776-foot-tall skyscraper had been redesigned to meet security concerns and would be even more elegant than originally envisioned.

Police had refused to sign off on the building's design two months ago, voicing concerns that its base was too close to the sidewalk and could not be adequately protected against a truck bomb attack.

Because of the changes, the 20-ton granite cornerstone that was laid with great fanfare by New York Gov. George Pataki last Fourth of July will have to be moved.

That thing is so gonna get blown up. I hate to sound callous but if anyone dies it in, I honestly won't even feel bad for them - unless it is (e:hodown) and even then it will only last about 5 minutes. After the original towers were bombed and then blown up, who would ever set foot in the new even more groteque "freedom tower." It's just screaming bring me down. I can almost here George Bush's texas twang when I say freedom in my head now. That word has become so perverted at this point. 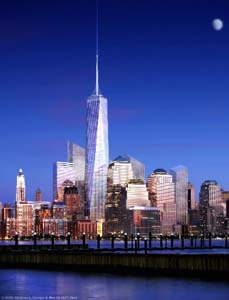 I have the same feeling, that we're just asking for it to be blown to bits. Plus it looks like it belongs in Hong Kong, not NYC.

Here is Jabe Pond. i will be there if anyone needs me, haha. However, you will need hiking boots and a canoe. 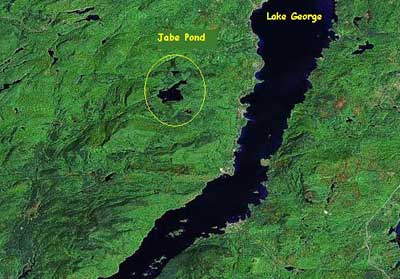 I stole this pic from somehwere on the web. I wish I could give credit but I lost the link if anyone knows where it came from IM me.

I am getting ready for camping today. We are going to the adirondacks starting tomorrow and lasting for a week. We will be really far away from people. The campsite is on an island in the middle of a lake on state land. You have to get their by canoe. It is pretty much in the middle of nowhere. It's a really bad time for me to go with the thesis and evrything but it won't be summer for long and I should take advantage of it. (e:mike) will be staying at the mansion.

(e:shawnr) tried to get me to put google ads on the site. I tried it for a bit with the ads above the banner when I was logged in. The idea would be that the ads would be there unless you were logged in. I gave it about five minutes and started to feel sick. I mean it was like this sick capitalist satanic mark across the top of my otherwise happy place.

Then I found this quote someone wrote on another blog

where there were google ads


Just as disheartening as when professional hockey replaced the bare white boards with banner ads.

The "in your face" money-grab commercialization has spread far and wide. Perhaps it is the new reality, but nontheless, a sad one, faced every day by us all, everywhere. And, I think it has conditioned us to develop personal filtering systems that require "shock and awe" to penetrate. All this pushes the envelope of what is acceptable in advertising...which in many cases results in nothing more then an exercise in bad taste.
lwist : oh. well, that's a good reason

That was the end of that. I removed the google ads. I would rather work to pay for the site myself than to see it look all commercial. The ads arn't very well targeted either. Each one of mine was about magic and magic shows. I never write about magic and don't have nay magic links.

Guercios is Great - Where's the Warehaus

For those of you that have never been there the Italian grocery store named Guercios at the corner of Grant and Lafayette is by far one of Buffalo's finest food treasures. They have the freshest produce at the best prices. Even cherries were reasonably priced. For some reason they were so freakin' expensive everywhere else. I bought lots of tasty italian treats at the most reasonable prices. Parking on grant is a little tricky, but you can easily park in the church lot across the street. 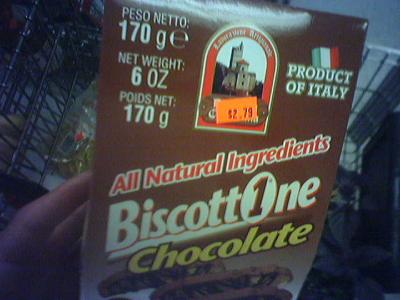 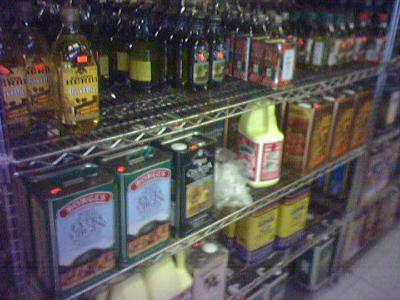 The other day I saw this pic for a party at a place called the Warehaus. It was back in May. Does anyone know anything about hits place, or did anyone go to this party? 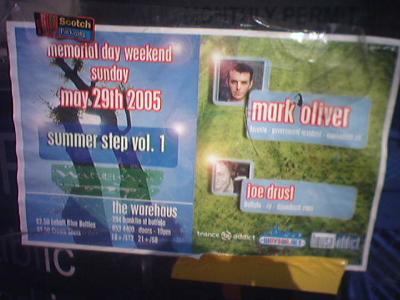 I've been to Warehaus. It's on Franklin somewhere I think. It's okay. Next time I want to see coked up half naked chicks I'll go there. Heh heh.

I agree, Guercio's is a great store... they just expanded, too. We get a lot of produce there. :O)

I deleted the zero masses

I deleted just about everyone who signed up over a couple months ago and had zero entries. It was time that I cut back the fat from the database and they were ready to go at this point. It was hard to decide on for a lot of them because I will always wonder wonder happend. Did they have some simple technical difficulty that I could have helped them with. Was it the community itself? Did they join myspace or livejournal, as was the case with most of the ones I talked too. A lot of people said they were pressured to join by their professor at UB and that they stopped as soon as they were no longer ebing graded. That seemed really sad and never what I intended. I hate to think anyone thought they were required to keep a journal as a chore.

So now we are back down to a reasonable 181 users with 166 that have already written. This is good. We now are ready for new people and a fresh start. The caching system should help with speed, and soon enough - most likely by fall - I will have a much bigger server solution.

It is really hot out

We hit a record high two days in a row. I actually really like being super hot. I figure that it's in my Mediterranean genes. Me and (e:mike) hiked down to wilson's farms for ice cream but we realized that we couldn't brign it home because it was so hot out. All of the freezer cases were defrosting and iced over. I decided on an iced brownie bar, which in reality was totally non-refreshing but a nice additional 380 calories that I could add to the cherries and sandwich I ate today. When it is so hot out, I am almost never hungry.

Yesterday night, I was walking home from the Artvoice Music festival when I saw that a friend of mine from France had signed on. We hadn't talked in a long time so I sent her an IM. She prompty said "Der Schiff ist in dem Wasser" and then signed off. That mean sthe ship is in the water, although it may be some idiom I cannot locate the definition of.

Anyways, so she signs off an dlike ten minutes later some other person signs on and starts IMing me in german but makes no sense. I ask them if they are "auf Drogen" and they reply I am not a dragon. they also tell me that EMilie is now a man. If figured it couldn't be write and so when they signed on again I tried in English. Still no real sucess locating her.

Grokster and the Ten Commandments

What is this going to mean for P2P technology such as (e:shawnr) 's blogtorrent. Also what about tape decks and CD burners. Are they the next to go?


Technology for trading files on the Internet unanimously condemned by U.S. Supreme Court.

The Court ruled unanimously against Grokster, upholding a Hollywood coalition's allegation that software developers violate federal law when they provide the means to share copyrighted music and movies.

"We hold that one who distributes a device with the object of promoting its use to infringe copyright, as shown by the clear expression or other affirmative steps taken to foster infringement, is liable for the resulting acts of infringement by third parties," Justice David H. Souter wrote for the court.Quoted from: RED HERRING | Grokster Loses

This is even crazier. What context is "part of a broader display of historical symbols?" I wonder what woul dhappen if we pushed to get lots of islamic symbols display as parts of historical symbol art projects on federal land. Someone really needs to test this.

June 27 (Bloomberg) -- Governments can post the Ten Commandments on public property as part of a broader display of historical symbols, as long as officials aren't aiming to promote religion, the U.S. Supreme Court said.Quoted from: Bloomberg.com: U.S.

Jason, I just am absolutely sure that the justices had no intention of being inclusive about other religious beliefs.

Ah, it is interesting you bring up Islam. I haven't talked to you about this yet but I have recently read the Qu'ran (or about 3/4 of it anyway). There are many repeating themes, and constant references to Moses's law (the commandments). So although the secular left here often says that the commandments represent the US trying to impose Christianity on the nation, really the commandments are to be followed by Jews, Christians as well as Muslims. I doubt this makes you feel any better about it, hehe.

I often say that law is only loosely tied to morality. I don't know anything about Grokster but there are copyright laws here (for better or worse). Really the music companies could solve this problem themselves by pricing CD's reasonably and by refusing to promote and sell absolute SHIT. Of course we know that won't happen. This breaks my heart. I feel like I should have existed as an adult in the 70's.

To me she was by far the finest singer at the artvoice music. She is so freakin' hot. I was watching them whiel hanging out with (e:drchlorine) for a second and then he realized he had some unfinished busineess with the drummer and had to leave.

I spent most of the day hanging out with Bekah. Being with her made my day. She is truly one of the nicest people I know and I always feel comfortable talking to her no matter how little we see each other. I also got to meet lots of other people and even saw this kid who was in my gym class in high school. He is going to Glacier National Park to work for a bit. I am mega jealous of him, that he gets to go Northwest.

Bekah never knew I datd Chris back in the day. I wonder if it was a secret for the rest of the world.

WOW is she ever beautiful. I'm in love.

It is pretty crowded for 91 degrees but it is nice that there is much more space than thursday in the square, so it is easy to walk around. 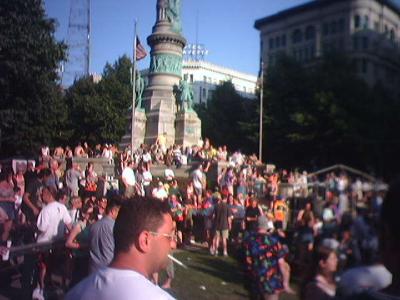 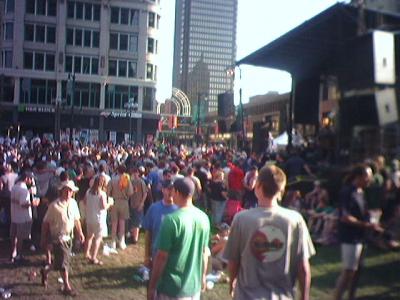