Not the spanking chair

These chairs have been rejected. I knew I would never end up reupholstering them so I put them out for big trash day. Both are already taken and were spared from the trash. 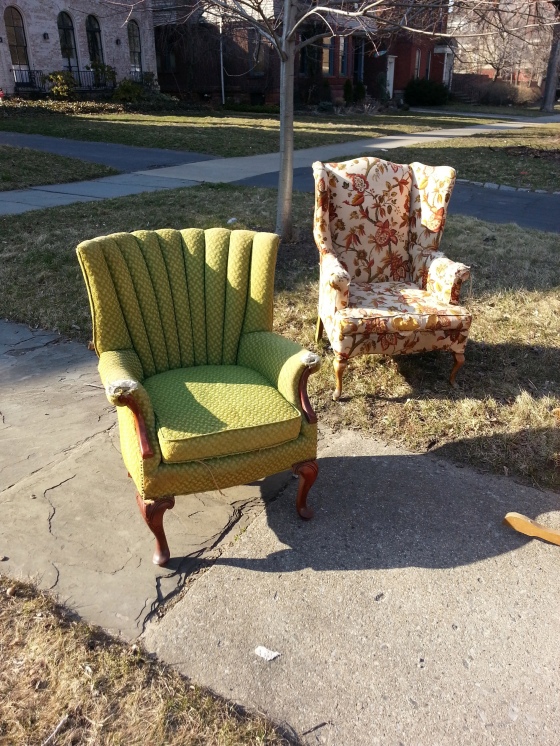 This dresser arrived ~30 years ago as a gift for my first communion when I was 7 years old. Its now returned back to my childhood room. My parents bought it for me at Calvin's Furniture in Kenmore, NY. The brand was Young Hinckley.

I loved the dresser as a kid because of the cubby hole in the front. It used to have a door that turned it into a sort of treasure chest in my eyes.

My first pet tortoise used to live under the dresser. I wonder if it will miss me. 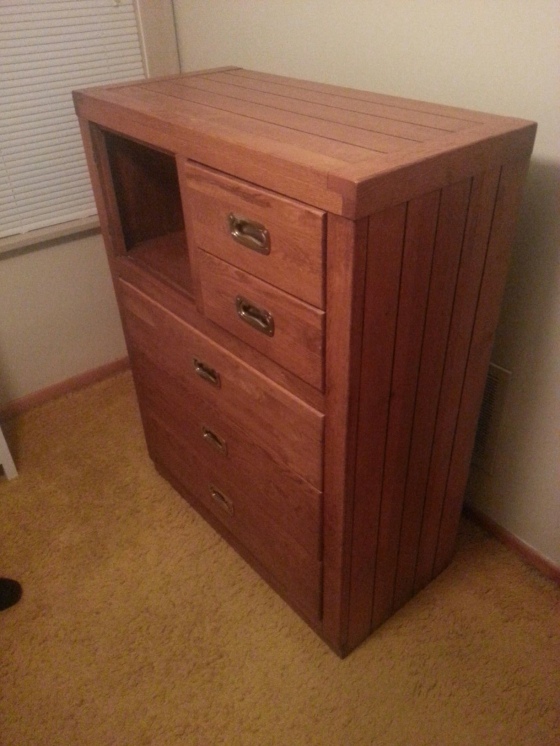 The new dresser arrived this morning. The bed comes in april but they gave us a metal frame to use in the meantime. Its thr first time since I was a child that my matress wasn't just on the floor.

The mirror on the new dresser is awesome. I kind of wish we got the nightstand too but it was just too damn expensive. 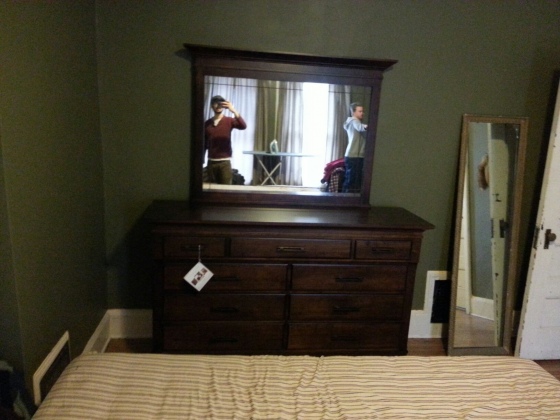 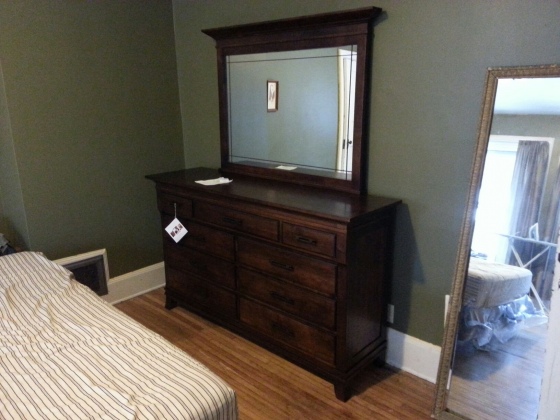 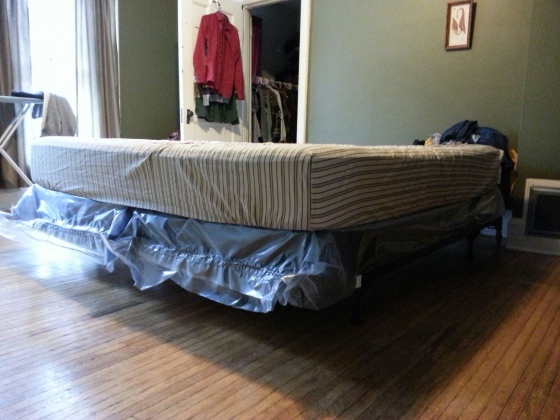 OMG, I can't wait for that day for myself! I got Elijah a new bed last year, and there's just too many things on the list before I get myself a proper grown-up bed!

This gem is sitting in the parking lot behind India Gate on elmeood. It looks like a prop from a horror movie. I wonder what era its from? 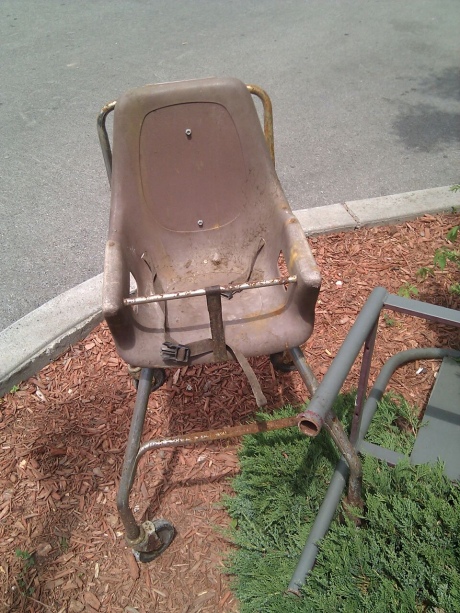 As long as your kid had a recent tetnus shot.

I bet it had cushions where the screws are. If you imagine it new, it doesn't look that bad.

I'd guess from the 70's. It was all about plastic molded accessories then.

It's outside. If you want it - come get it. I am keeping track of the
cushions. If it is windy Ill bring it back in so the parts don't end
up all over the street. 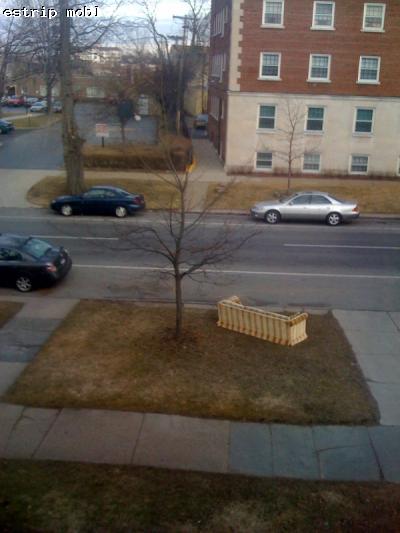 Drexel is a manufacturer :::link:::

So why is it called a Drexel?

I've got the Drexel pics on my camera. I'll upload them tonight. Actually, I have a huge amount of photos to share.

So is the photo shoot going to be posted? :)

We also did one last photo shoot on it. If that couch could talk..

The drexel has finally had it. We have a book proping up the missing middle leg. This couch has come a long way with us over the last ~10 years. We were just discussing the day we got it. (e:matthew) was mad because I guess we left him at the laundromat for two hours while (e:hodown), (e:terry) and I got it and this was before cell phones.

We got it at some fly by night antique shop next to the laundromat on elmwood avenue right after you cross the Kenmore ave line. I remember that it was $125 and that we gave the guy $100 and told him we would bring back the other $25. I am pretty sure that we never did because when we came back like a week later they were closed forever. I remember it seemed so expensive, like we were being totally crazy spending $125 on a couch. It was in relatively good condition then although I think it had already last about 10-20 years since its creation. 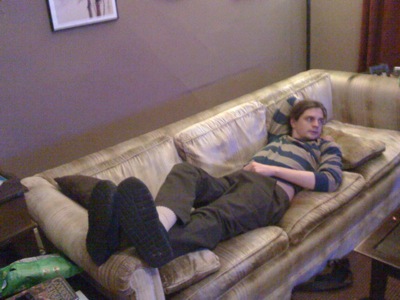 Somewhere along the way we also got my grandmother's old couch which was worn out by the tenants that lived there after her. The fabric is all ripped and its not a good lounging couch. 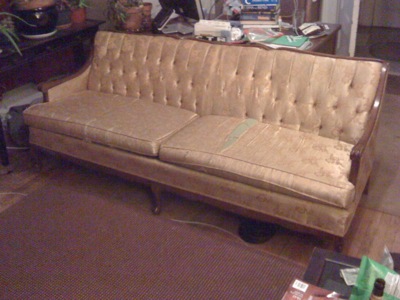 So we decided to use some of our tax return money to get some couches that will last, not smell like chemicals, be hypo-alllergenic, and allow you to sit up straight. I was sold on leather because it doesn't create so much dust like cloth couches.

We shopped around and went to Value City (crap), FWS (ok), Rosa's (ok) and Raymour and Flanigan's (awesome), Our saleswoman at Raymore Laurie Guerra was really helpful, I would definately recommend her. We sat on every couch in the store, it took us two days between the stores. In the end we liked the first couch we decided on like 15 minutes into the first day of couch shopping. Same with everything in my life e.g. the house, the car. Its just after the matress fiasco I decided to go ahead and make sure this time.

Along the way we saw some crazy couches. Including the one with the cupholder form my previosu journal (e:paul,47910) 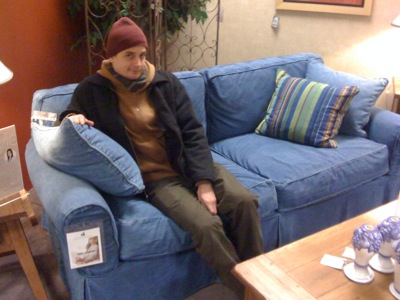 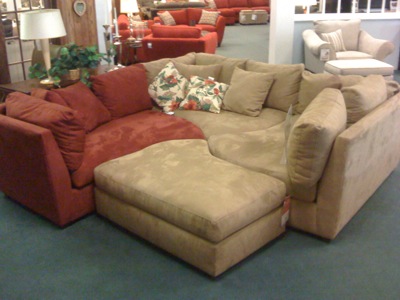 And this really big comfy, recliner couch that i wanted but that (e:matthew) couldn't stand the look of. It was pretty comfy and fully reclined almost like a bed. 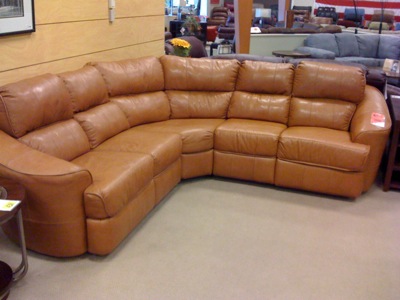 In the end the two we chose were pretty contemporary but classy italian leather with hardwood interior couches. They had some eco friendly hypoallergenic stuffing as well which made me happy.

Instead of getting a couch and a loveseat, we got two couches because we are tall and it allows two people to lie down. Did you know that buying an additional couch is only $30 more than the loceseet. That seems like such a deal when you think of all the extra fabric and materials. This was the model, called "The Morgan Leather Sofa" 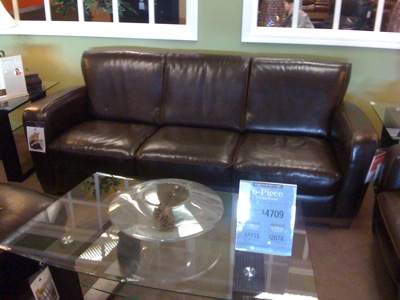 Here is the glam shot of it from their site.

FWS had a couch that was cheaper but they didn't have the same service plan and I didn't know what the stuffing or frame was made of compared to the raymour one. This was especially important to me after the mattress fiasco from last year. Also the leather was thinner. However, the salesguy at FWS had a really nice butt. 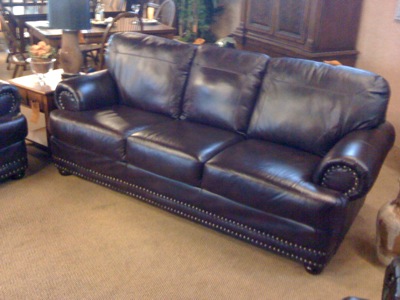 The other thing FWS didn't have was the 5 year warranty plan that Raymour and Flanigan's does. Seriously, it covers everything from scratches and tears to cigarette burns fully for five years. How could you turn that down.

(e:Matthew) makes a gorgeous sofa model. :D He is like one of those 60s-70s beatles-era model in these pictures!

I agree R&F's furniture is so much better, especially along the lines of craftmenship. You're liable to get twenty years vs. 5 from discount furniture stores.

Well that sex room couch would go great in that dark room that has like no light and the cage (I don't even remember how to get to that spot in your place) Hey you could have an entire different kind of party in there, HA. Glad you found stuff you like I hope it holds up well.

A few years ago when in the position and need for new furniture, I decided on Raymour too. I eventually ended up buying two couch and love seat sets (I have two living rooms). A large fabric set and an awesome leather set. I love it all. The leather they carry is very comfy, sturdy and attractive. The set you chose is very attractive. Good stuff, fair prices and kick ass warranty plan. enjoy!!

correction: The laundromat was next door to the thrift store we bought the drexel from. It took you, (e:terry) and (e:hodown) two hours to "get rope from Jessica's house". In other words, to get high. That's why i was mad, cause you made me wait for you in the smelly laundromat.

Getting up from being naked on a leather couch on a summer day is like a fly on flypaper, except pleasant.

I love leather couches. I got to remember to give you guys a electromagnetic cloth to use for dusting. Works good on the leather.

You totally should have gotten the ultra lounger couch! Can you imagine? No one would ever leave the house..

Only downside is stretching out on a hot day, the sound your leg will make when getting peeled off the leather.

Does anyone want this vintage solid wood Art Deco hutch and chairs? The hutch is probably worth money but I don't want to bring it anywhere because its heavy. If we still had the table I would have tried to sell the set. They are on our porch destined for the garbage if no one wants them. I am going to try craigslist too. 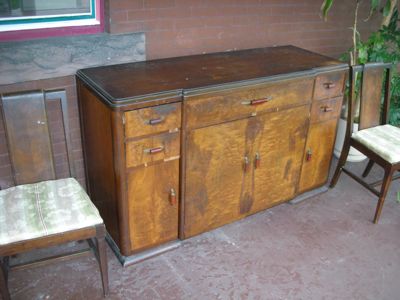 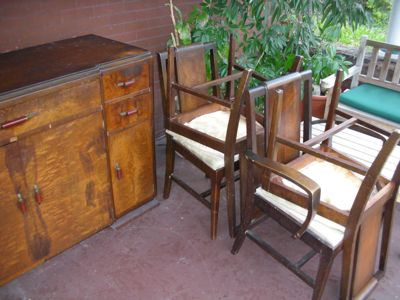 oh man that is a sexy hutch!