(e:terry) and I picked up (e:shawnr) and we went to go see the UB battle bots competition in the student Union at UB. Adam, this guy in my elecy tonics class won the competition with a bot that had a propeller which could chop the other battlebots up.

Then we ate at the student union, which is a serious ripoff. Terry and I each had popcorn chicken and fries, shared one drink and one salad and it came to $14.00. That is so insane. 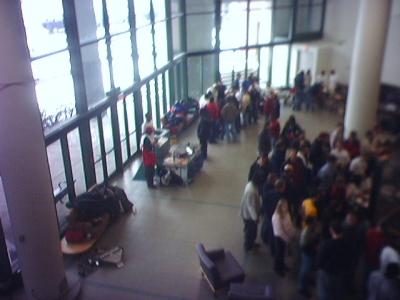 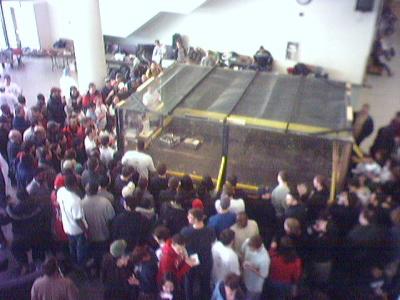 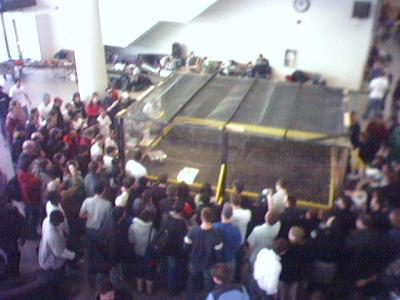 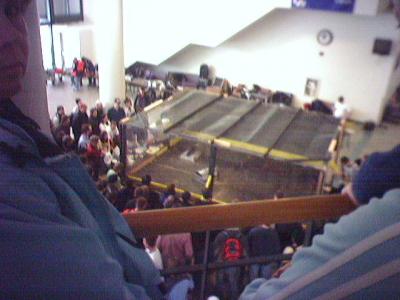 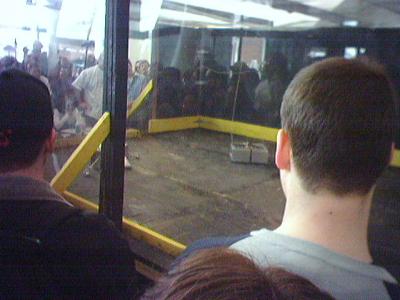 You would be proud of me. I installed suse linux 9.2 by myself and built the lastest wireless firmware and got the ATI radeon 9700 Mobility to run properly on linux for the first time. It is really fast. If you remember we were getting like 1000 frames in 5 sec = 200 fps at best.

Now it runs like it should have and the 3D is really smooth. I am getting used to using make now.

These number are much more what I expected. I really believe this linux thing can work out now.

I was looking for info about the battle bots contest at UB tomorrow and I found out there is a bunch of robot stuff going on in Buffalo.

Maybe once I am done with school I will begin building robots.

So I was happily working with Fedora Core 3 after Linux got me started. Okay I meant (e:ajay) - that was really a typo but I think linux is a good nickname for him - so I am going to leave it. Anyways, so after 1 hour of having fun with it I went ahead and messed it up to the point of no return. Like seriously I think I did the equivalent of deleting the mac OS X library or the window system32 folder.

Ya, so I am back to square one and back to Suse 9.2. I actually liked Fedora Core a lot - and think I will switch at the end of the semester but right now I really need a functional operating system ASAP and I know that Suse gives me wireless out of the box and is now "qualified" by alias for running Maya 6.5. When I have time to figit more, I will figure it out on Fedora Core. Or maybe tomorrow seeing as I seem to enjoy installing linux everyday!!!

Hopefully, I will end up making it work this time. I have learned so much from watching (e:ajay) type.

Video Evening with the Saucy Seven

Okay, so I am really not into interactive performance art with audience participation. Let me re-phrase that. I am not into it when I am in the audience but I still managed to have fun last night at The Saucy Seven event.

The location was, a factory basement on Niagara Street near the foot of Ferry complete with a conveyer belt. There was a long dinner table, with enough room to hold 40 people. On either end were large projection screens.

I will recap the performances here.

Julie Perini - our very own former (e:churchofjulie) created a video about factory work in honor of the location which was quite appropriate. On the video screen was a video of people, maybe I lLove Lucy, working in a factory. I feel bad but I didn't pay any attention to the video and not because I was not interested. The was the the performance involved us performing the act of making sandwiches. We each got a bag and we each had a task. I had the plates and was in spot number one. I past the plates down the table and each person got one. They also carried out their own personal task. For example. adding break, cheese, lettuce, toothpick, olive, napkin, etc.

At one point I tried to speak out against it, like why are we doing this but (e:terry) told me that it wasn't cool to protest and I wouldn't be proving anything so I silenced and pushed my plates. At least my job was the easiest.

Eventually each person had their own fully made sandwich. At that point we were supposed to eat them. Well, I was too grossed out by all the people sniffling because of the freezing conditions. I also forgot to put on my sanitary rubber gloves until the end and figured other people did that too. Overall it was a quite overwhelming experience but probably simulates the feelling of working on the line doing a timed task quite well.

Some Girl - Asian girl burns folded swans in a wok and read a story. It made lots of smoke as it went on for like 15 minutes and I kept have pyrophobia (if thats a word) because the oil or whatever in the wok kept sizzling only like 3 feet away from being on the next faces of death. I think it was probably so overhwlmeiong only cause I was like right up in it. I couldn't pay attention to the words she was reading because of my constant concenr with the fire so I have no idea what the story was about. I think if I had sat further away I would have gotten more out of it.

Soyeon - (e:soyeons) video was really awesome. It was a little slow for me at times because of my very short attention span (thanks to multitasking on the computer) but it was truly a visual masterpeice in my opinion. It was all of these images superimposed and juxtaposed and filtered and moving.

Robin - (e:robin) 's video was really well done as always. Maybe it was one video with two parts, maybe it was one video. Part one robin juxtaposed conversations she had here about the south and then conversations about the north she had while home in Adairesville. She is so good at editing sound. The other part was about how she had her butt wiped as a child but then when she grew up no one would wipe her butt and the real question was why not. She klept talking about shitting while videos of her and her little neice played of them smearing chocolate pudding all over their lips and faces. It was very robin.

was by far the most intense. As I said before there were two video screens one on each end of the table. On one end liz was eating cherryies, real zoomed into her face. ON THE OTHER END - liz was singing "Cherry Baby" live. She was wearing a red dress and had a mic. But the kicker was on the video screen right next to her she was popping marachino cherries out of her vagina. This went on for a long time, like 15 minutes and the audience had a hard
time deciding where to look. I decided to watch the audience for a while. Then at the end we all recieived a jello vagina with a cherry inside and were supposed to eat it. Probably because of too much beer or because jello reminds me of horse hooves and being sick to begin I thought I was going to throw up at that point. Also the girl next to me saying hers smelled really funny was making it worse. Mine was also different than everybody else's as it was the mold that the other jellos were molded after.

The entire performance was actually quite thought provoking because the audience was confronted with the lyrics of the song, which are quite explicit, plus the explicit video depicting what the song is actually about it seems.

Chris Barr - Chris wore tube that was connected to his mouth on one end and connected to headphoens of the other. He went aroudn the tabel and someone would put the the headphones on your head. Then he would speak and you could go. I wonder if he told everyone the same thing? Maybe we were supposed to talk about that. I will ask (e:terry) and (e:matthew) when they get home from skiing.

We took off at that point cause we thought it was the end. All in all they were quite entertaining and thought provoking.

There was, however, one major problem with the evening. The fact that it was about 9 degrees and there was no heat. I was shaking so hard from freezing that I looked like I was on crack. I really don't have much protection when it comes to fat reserves.

After we got home Dave stopped by and me and (e:terry) helped someone online translate a ghettotastic rap song. The person before us on the forum translated "pop some bubblies" as pop some platic packing bubbles for fun. We clearly had to correct that. It was probably the most fun I even had with German.

I made two pages with images of some of my students' artwork. There are about 100 other artworks I want to add but they are all on my office comp so they will have to wait till next week.

(e:scud) , if you read this I need your dragon and still frames from your capstone.

(e:dan,73) Dan the sidekick doesn't have bluetooth or video. Maybe it is a hoax.

It was freakin' lame, in fact I am embarrassed to be recording it here. (e:rachel) was sick, late, and tired. (e:drchlorine) showed up with his new girl, who is (e:rachel) 's boss or something (she was pretty cool), and left early. (e:soyeon) refused to go because of a misunderstanding. (e:mike) was at rent, (e:dan) at a poker game, (e:lilho) and (e:flacidness) were sick. So none of their gangs showed up either and (e:ajay) drank at home. Basically, (e:matthew) , (e:terry) and I could have just drank in the mansion and had (e:rachel) and (e:drchlorine) stop by.

Apparently, taking the highway to school is not a shortcut but a giant circle. I guess I knew that but this map makes it ever more obvious. 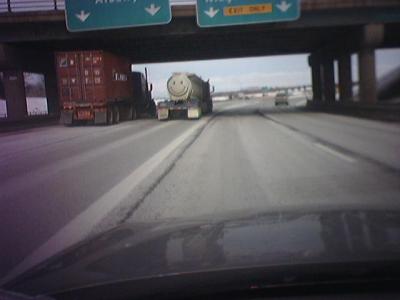