I clearly can't afford to buy these three books. But I didn't have a pen or my sidekick so I decided to buy them in order to get the ISBN numbers. I am keeping only the DHTML guide. Should I feel bad about this. I was thinking about why computer books are so expensive. Maybe it is just because they are like tickets to making more money. 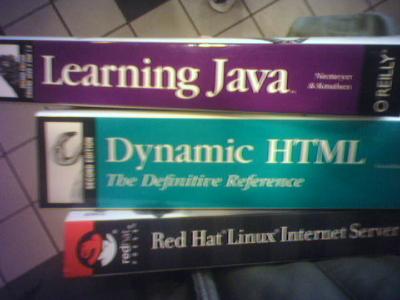 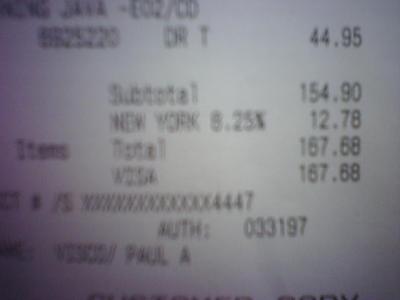 Robin and The Robery

Robin, [inlink]robin,214[/inlink] sorry to hear about your incident. You should really post a description of the man so other people know to watch out for him. Maybe even scan in a little sketch.

I agree that the police in Buffalo are useless. I have called them during three serious situations [inlink]paul,692[/inlink] in Buffalo, and they have never helped and/or arrived during the time of the crime or even within an hour of the situation.

That is one advantage to living in Kenmore, that little police state on the other side of Kenmore avenue. I mean you have to deal with their draconian policies, like no siting on the sidewalk, etc but at least you know in an emergency they are there in about 45 seconds, seriously. If I was old and law abiding this would be ideal. They have even recovered several bikes for me which is never going to happen here in Buffalo.

The other night at (e:keith) 's house [inlink]news,362[/inlink] Jill and I were just joking but I think it holds true. We were saying that in a real emergency we would probably just call the Kenmore police and beg them to get us, haha.

I honestly do not feel any safer with our city cops. Just more scared, remember critical massacre anyone? [inlink]emily,167[/inlink]

Or how about when (e:chaibiscoot) had her night visit from cops [inlink]chaibiscoot,11[/inlink].

Sometimes vigilante tactics [inlink]holly,62[/inlink] are the best ones. One time in the Tops parking lot my mother was mugged, and (e:mike) was just a kid. He apparently just screamed and screamed while my mother wrestled her purse back. Robin, you should just carry some mace with you. I mean even if its illegal, we can pretty much rest assured the Buffalo cops will never catch you. Maybe even a tazer. 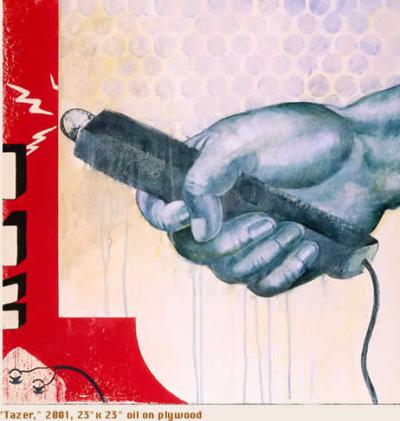 I got this picture from

Jason Coates has some really great oil paintings. I foudn him on google.

In reference to [inlink]soyeon,45[/inlink], I have also made it a week without smoking any tobacco. This is the longest ever I think. So thanks to my little lung crunchies [inlink]paul,1246[/inlink] and some tastey mushrooms, I don't think I will ever be able to smoke cigarettes again.

The Taste Of Buffalo

Okay, so my very favorite time of the year is almost here. I once skipped out on a trip to France in order to attend the Taste of Buffalo. Here is a 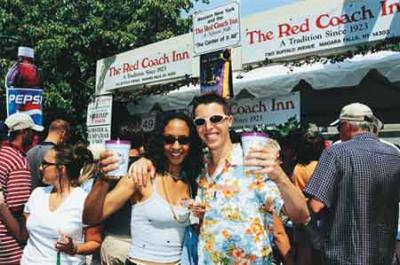 I know, most of you probably think, he is so skinny, what the hell does he even eat. Well, at the tast eof Buffalo I eat everything, especially anything wrapped in tastey bacon, like the bacon wrapped shrimp they are bound to have.

It is time to plan for the day and save money for the 6000 tickets I will need to have. I was going to promote the site that day but I figure I'll skip it and wait for the Elmwood Art Festival [inlink]news,370[/inlink] where my hands won't be so greasy.

Anyone want to go along with us?

Buy Me A Drink Events Addition

I spent the day not planning for my trip or getting the car fixed but rather progrqamming the events calendar at the request of (e:keith). I hope that lots of events happen because of this as I had really intended to wait until I had time to develop the epeeps.net

I turned out better than I expected for an afternoon. If you'll have any feedback for the calendar system feel free to send me an IM.

I am going to go eat now. You can find me online via my sidekick if need something or have any questions about the event system. How about someone posts an event for tonight to celebrate its creation and buy me a drink.

On another note, I fixed the AIM stuff so maidencateyes can now be part of the game!

Our car was once fancy too [inlink]maidencateyes,47[/inlink], then we met the Verizon guy's truck around the corner and dented it, then I ate a popsicle and gave it to Sarah. As it dropped, I freaked, turned and crushed my neighbor's car denting our bumper. Once it was fancy.

One time, (e:matthew), was checking something in the passenger mirror sun deflector and ripped it off.

Nonna's Birthday and School's Out

I am officially done with school except Sang's incomplete. Today was Nonna's 89th birthday party. We went to my mother's to celebrate it. (e:mike) and I searched all over the city for something to buy her. I called my mom from the grocery store in order to ask her what would be a good gift. Nonna doesn't really like the typical old lady nicknacks. I wonder if any old ladies do. 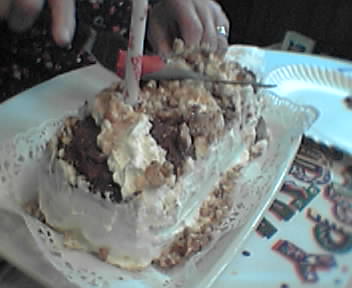 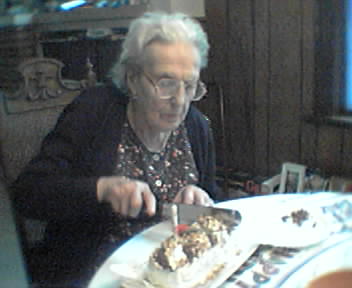 While at the flower store, we asked for some pruple irises with some orange mum's. They looked great together but the way uncool looking farmhand style flower bitch freaked about the colors. I couldn't believe it when she asked (e:matthew) and I if we "really wanted those colors together?" Nonna loved them. 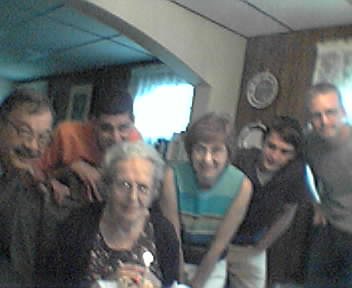 We went up to Toronto for the weekend and ended up in the fanciest hotel room we ever had stayed in. It was so fancy we got a tour of the room and the bell person carried our luggage up there. Never will do that again.

Hopefully, starting Wednesday I will get a chance to start working on the site some more. I have really missed being able to program. I would really like to take a couple of sets of functions and move them over to classes.

Tomorrow, I have to spend the day gardening and on Tuesday I am taking Emily to the airport and then teaching one final class for my 3D modeling course at Canisius. I will probably also post the information from the other night.

(e:mike), sorry the email thing was messed up. You sent one email that did not have a final dollar sign on it so it never got deleted and the whole thing kept on repeating. I will need to work on that on Wednesday.

Last night I got a chance to reflect on the work I have been doing. It's crazy how much is beginning to make sense. ORginally, I was in such a high production phase that I could not take the time to critically analyze what it all meant.

Unfortunately, last night I couldn't stop reflecting and almost blinded myself. Eventually, I would like to publish some of my data but I have to wait till I can move past the editing phase and stop restricting myself from deleting again.

(e:emily), I made the search box the cranberry color you like.

Here is a picture I took of matthew breaking the speed of sound barrier in his rocking chair. It remiunds me of those 19th century spiritualist ghost photos. 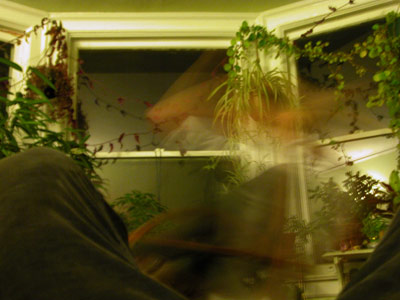 (e:azurexeruza) you arrived at just the right time.