We are friends after all

I am glad this worked out. I never meant to make the cat unhappy. Seeing as it is hairless, it might be the only cat friend I will ever have ;)

I posted the pic you sent as is - below, and credited you with a link back to your site.

Thanks for understanding. I never was angry with the cat in the first place, I was angry with Michaels reaction. It never said cats suck until after he bothered me although I still am not a big fan of hairy cats because of my severe allergy - they make me stop breathing.

If he wants to get back at me he can make fun of my pet, the tortoise names basra

Thank you for the explanation and I'm so sorry you are allergic to fur. I am sure that the Bambino, "Hadrian's Wall" will not take it personally and, in fact, would be tickled that you have created a game with him -- even though it is about "killing the cat," the fact that the shooter is Hadrian softens the blow. The game is delightful, actually! You are gifted, Paul.

Thank you, too, for explaining the events that transpired and your feelings. I know that Michael didn't mean you any harm but was protecting me and my images, for which I am grateful. Michael is a good man. He has a love for all things "cat" and especially for the vunerable and stray cat with the proceeds from his site going to help uncared for felines in undeveloped countries. Michael's site, www.pictures-of-cats.org is a new one, not even a year old, and he works very hard at making it better and increasing traffic. I'm sure that "CATS SUCK" was such a jolt to him, as it was to me, that you can understand both of our reactions. If we were in our 20s ... probably a different story. :)

I'd like to fancy that Hadrian, the Bambino, would be grinning if he knew what an uproar he caused! Not that he'd even care about the machinations of mice and men, but he'd be pleased to know that you thought he was cute. I am.

P.S. Thanks for the link to my site, Paul. And here's another shot of Hadrian that was my favorite. 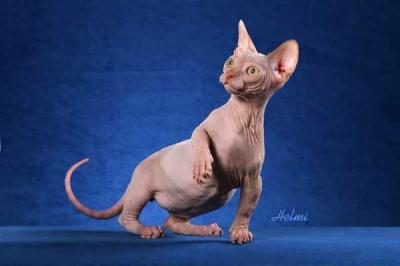 omg, i'm sorry i could not have that thing in my house.

Through this all, one important item has been overlooked.

I think this cat is a fraud.

I mean, really. It is claiming to be a "hobbit cat" when in fact it is completely hairless. Were it truly a "hobbit cat" then it would surely have hair. At the very least, on the tops of it's paws I should think.

Bambino, please accept my sincerest apologies if you are reading this. It's just that it is this reader's opinion that you're a liar. Or at least given to gross embellishment.

Jesus Christ - I've just backread and these people are in desperate need of human friends. That is a cute and well done picture of that cat, although I have to say its skin kind of reminds me of the skin on a Thanksgiving turkey before I dip it in the hot oil! If it clucked instead of purred I'd totally be weirded out.

Anyway I'm glad that the handbags have been put away and everybody is getting along. Maybe this is exactly the sort of cat that would suit you.

and a happy ending to finish!

Appology to Helmi Flick and Bambino

I don't understand why you have made a derivative work of my photo of the Bambino. This little guy was so happy when he was being photographed, I was smiling through the whole session. Cats are like people: some you like and some you don't; they are all different.

I can't see that what you have "created" will do anything but hurt. If I am wrong, please advise.

I am sorry you got dragged into this when really I am irritated with your photographer's friend Michael. It wasn't your fault that this happend and I still think you are as cute as when I first found you on the internet last march. Frankly, it is the threatening tone of Michael that brought this on - you should bite him the next time you see him.

Let me explain the whole situation. Back in march of last year I wrote a journal

about hairless animals because I am allergic to furry ones. I had nothing ill intended in the journal I wrote. Original, the picture of you was the normal one I found on the HobbitCats Cattery site

It was not marked as Helmi's picture whatsoever at the time because the Hobbit Cat site had not marked it. At that point, I copied your picture from their site, and credited them with the photograph as well as a link back to their site. I had no way of knowing that Helmi took the picture instead of them and fulfilled my fair usage obligation by linking back to the site I found it on.

Had Michael emailed me the other day and asked to add a link to the Helmi Flick site instead of the cat hobittery site I would have happily obliged. Instead he threatened to sue me. I think that is ridiculous and what prompted my response. I made the derivative work at that point - which lets be honest is not hurting your feelings - as you are a cat.

I am sorry I took it out on you in that video game below - the anger should be directed at Michael but I only had a picture of you.

Now he says he is going to "black me" on google - whatever that is - to me that sounds like a threat against my freedom of speech.

Can we make up and be friends?

no this is seriously better than soaps..

WTF. Somehow I missed these posts. At first I was entirely confused. Then I thought you were joking. Then I got to the original. Now I feel like I'm reading the script for "Passions"!

Your response is shocking, ridiculous and shows us the type of person you are. You are demonstrating to your visitors the kind of person you are (extremely childish). I didn't make a threat to sue. I said you can be sued (i.e. it is a possibility). You are the person in the wrong. You have admitted being in copyright violation.

The post that you have made is defamatory to me (calling me a freak). You have also insulted indirectly, Helmi Flick. I cannot tolerate either. Please remove the post immediately.

Reluctantly, I will be obliged to contact Google if you don't do the right thing. If Google black you, you might as well close your site.

Here is my response as a fun little game?

Here it is in text.

You are a freak. You live in this dreamworld where google does things like "black" people - whatever the freak that is. I guess you really don't understand the internet and how it works.

I am fine with people thinking I am acting childish about this stupid cat. I hate cats and you and guess what - I am free to express that here on my journal without any fear of being affected by your pathetic threats.

I have been writing childish drivel on my journal for 5 years and 1.6 million views later, I doubt this issue is going to drive the readers away.

This site is not supposed to be anything overly serious or formal. Most importantly - we have no vested interest in customers and that is what makes me be able to say what they want and not worry about things like being "blacked" by google - imagining that was a real issue and that you somehow commanded google to your whim.

Its freaks like you that make people all the more curious - so thanks for bringing your drama here.

I acknowledge the original site I found it on from the get go - it is that cat hobbitery site that originally stolen your photo and it is not my fault that they did. I credited them because it appeared that they owned the photo.

The cat is now stamped with the copyright info and a link to Helmi Flick's site. Isn't that what you asked for? Do you really want to continue this?

Oh ya, and "kiss the pinkie"

This is why I love you.

First I would like to point out that I hate cats and have nothing to do with anything cat accept for hate. I don't sell them, I don't take pictures of them. I was never claiming to have taken any pictures of them.

Back when I was in San Francisco I wrote (e:paul,32816) about hairless dogs and cats. I included an image I found on the site

which I linked to. Unfortunately, that site did not have the link to the original photographer Helmi Flick

that it does now. I had assumed the cat hobbit site had taken the photo and that is why I linked to them instead of Helmi Flick

Seeing how much I hate cats, I would have gladly just taken it down if asked nicely. However, Michael Meister, whoever the freak that is, wrote me this nasty message today threatening to sue me. If they were so serious about copyright they should have watermarked the image.

The photograph of the hairless dwarf cat is copyright Helmi Flick and you have not provided a copyright credit. I also suspect that you have not got her permission. Please clarify the situation. On the face of it this is a copyright violation. You can be sued for damages.

Instead of taking the picture down, I modified it to make it a derivative work. What kind of damages are you suggesting?

Please, some people are so copyright crazy. If your pick ends up in a Superbowl ad, sue away. Don't go after normal people who use your stuff non-commercially, be happy about it!

You forgot to add kiss the pinkie..

I hate cats as well, though not for a specific reason such as an allergy. I just hate how snotty and aloof they all are. A dog is always so happy to see its owner. Cats, not so much.

Anyway, thanks for the picture. NOT. That is one disgusting, ugly creature and it creeps me out. Yech.

"That which is seen cannot be unseen."

Thanks for the nightmares, Paul. And thank you also Mr. Too-Stupid-to-Use-a-Watermark-and-then-Overreact guy.

your anger is like a hairless dwarf cat, if only that cat could shit little pellets of bile all over the place.
Pretty much the best reaction in the year 2008 yet.

thats terrible, fuck those guys! they should have marked it, fuck ugly cats! i love the picture.