When I first read the title in an aggregator I thiught it was some war on drugs propaganda but its worse.

This is why religious people terrify me. I wonder if being emo can get you political assymlum now.

What does israel expect?

Political commentators expressed shock at how the United States as well as its major European allies appeared to be ready to dump a staunch strategic ally of three decades, simply to conform to the current ideology of political correctness....

To win popular Arab opinion, Obama was risking America's status as a superpower and reliable ally.

"Throughout Asia, Africa and South America, leaders are now looking at what is going on between Washington and Cairo. Everyone grasps the message: "America's word is worthless ... America has lost it.

I think they should instead be shocked that we ever supported Mubarak and other dictators in the first place. While the U.S. is well known for supporting dictators, it is totally antithetical to our ideals.

What to they want? U.S. military intervention against people protesting for democracy in order to protect a dictator who supported Israel. It doesn't even make any sense. The real reason they are angered is because it is finally showing that Israeli issues are not our primary problem and that we can support the values our government should support - like democracy - over blind support for Israel. I hope this is the first step, in stepping away from Israel altogether.

We Can take it one step Further not only have we supported dictators we have helped put someone of them into power or at least supported the Regime that put them in.....

It is about time that we let freedom win when the people want it.... The thing with Israel is because of land and faith having them as a friend makes you Enemies to others for no reason..............

For realziez. America supports Democracy and freedom only in so far as the state will be an unflinching ally of ours. So, we support people like Mubarak who detain people indefinitely, have citizens tortured and murdered, sham elections. THe Mubarak administration is similar to the Bush/Obama administration in a few of those ways, it seems.

If we learned to actually get along with popularly elected Muslims perhaps we wouldn't have to support dictators like we have in places from Egypt to Iran.

What is this place?

I can't imagine how it looks up close. 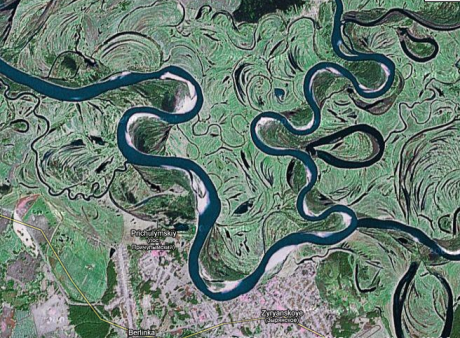 Update: I guess it is similar to the mississippi. 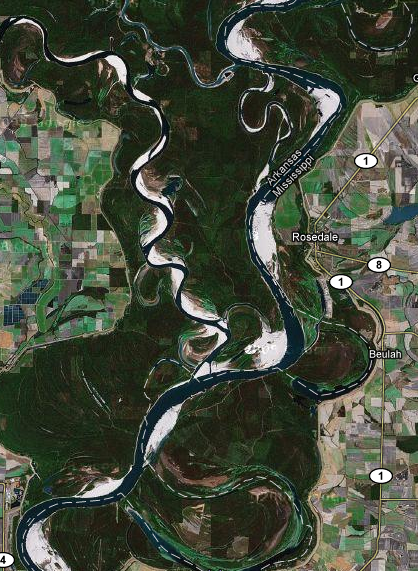 Looks absolutely fascinating from up above! :-) We live on a strange planet.

Actually it's probably very boring, flat, and marshy. Oxbows in rivers like that usually form in areas where the ground is soft and almost perfectly level -- the water meanders around in loops and carves into soft banks changing course.

How much cement is there in China?

So I was trapped int he car the other day and (e:terry) left the radio on kiss or something like that. Some rapper sand some song in which she mentioned juku girls. I had no idea what this was but forgot about it until tonight when I was reading about a US Japan exachnage program in the UB media studies program

that mentioned the same word. I am sure everyone else knows about it but it was new to me. I found this info at wikipedia

It is primarily known as a hangout for teens and contains the department store Laforet, which has many trend-leading brands for young people.

Harajuku became famous in the 1990s due to the large numbers of street performers and wildly dressed teens who gathered there on Sundays when Omotesando was closed to traffic. This area was called "Hoko-ten" or "pedestrian paradise". This was stopped at the end of the 90s and the number of performers, visual kei fans, rockabilly dancers and punks has steadily decreased since.

And these pictures on google 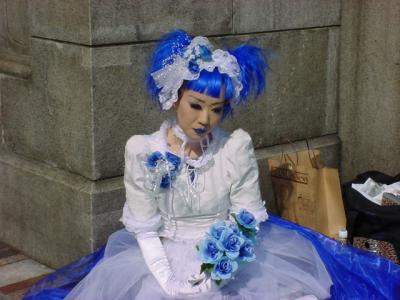 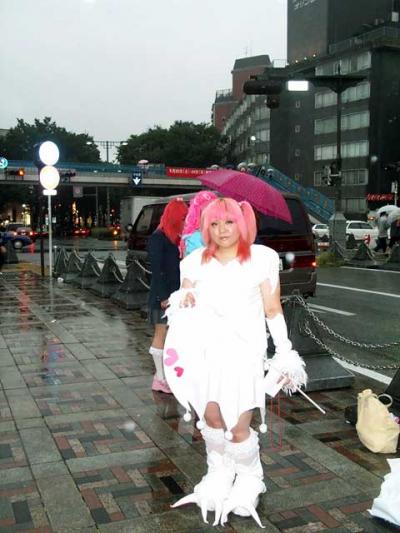 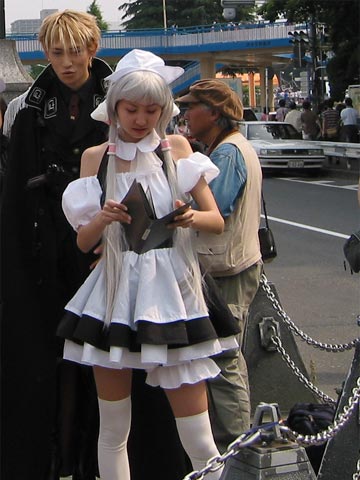 If I where to ever visit Japan that is one place I would like to visit and take pictures of. I saw a little bit about it on some show on cable not sure if it was discovery or travel but it was interesting cool looking pics by the way.

I love that guy's hair! Fun, fun, fun! I want to go to Japan and join these folks.

the song was by gwen stefani -- her whole new album has a lot of japanese-style stuff.

It was the greatest book to read while high at a friends house a few years ago.