Today, I went shopping at Guercio's, the Coop and Eegmans with (e:libertad), (e:mike) and (e:matthew). I cannot believe how cheap spices are at Guecrio's. I got about 60 sticks of cinnamon bark for $6.99 and about a liter of coriander seeds for the same price. To give you an idea of how cheap this is, at Wegmans - the cheapest cinnamon sticks I could get - were about 7 sticks for $5.49. It seems totally unreal, huh? 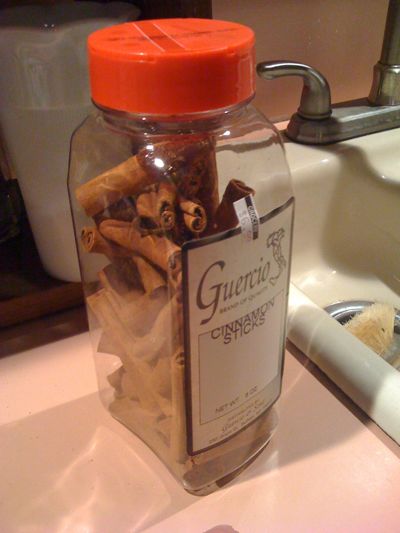 Wegman's price for the cheap brand 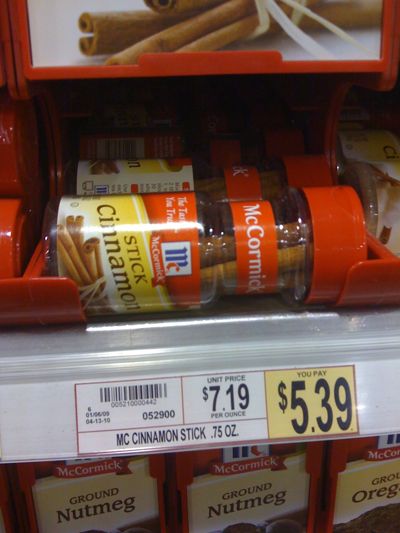 @James: Make your own! Store-bought masalas are so not the real deal! (except Trader Joe, which we don't have here unfortunately). The recipe is ridiculously simple. Dry toast:
5 parts coriander seeds
2 parts cumin seeds
2 parts cloves
2 parts whole black peppers
Dry red chillies to taste (A LOT! :)
in a cast iron skillet till the coriander seeds are a lightish brown and aromatic. DO NOT CHAR.

Grind to a fine-coarse powder. That's it. Store in the fridge to retain freshness (around 6 months).

@Jenks: REALLY?? What kind of spices do they have in bulk?! Pray, tell!!

ps i just found that the wegs on amherst has a bulk spice section- near the bulk candy, towards the front. Not 'name brands' but way way cheaper.

yeah same here. Last year I wanted whole cloves, and a little mini bottle was like $3 in the spice section, and then I found a gigantic lifetime-supply size bottle for like $2 in the 'ethnic' aisle.

Yesterday I was in Wegs buying some Garam Masala. In the spice section 2oz sold for 6.99. In the Indian food section an 8oz package sold for 2.49.

McCormick prices are atrocious, BTW. I wonder what their profit margin is. I am sure harried housewives and bakers grab those insanely expensive bottles from the Wegmans shelves as a last-minute resort.

I use rosemary on everything, so for me tht bottle seems very reasonable. The price sure is.

What do you think of Rosemary prices at Guercios? I wanted to buy a bottle but it was too huge. I haven't really experimented with Rosemary in my cooking till recently (when you gave me some from your garden). I didn't know if I could get through that huge bottle. Maybe I should have bought it...

I just compared the Indian Store prices. I pay around $7.50 for a kg (1000 gms). Its the fastest moving spice in my kitchen next to salt!

Parking at dance camp on linwood 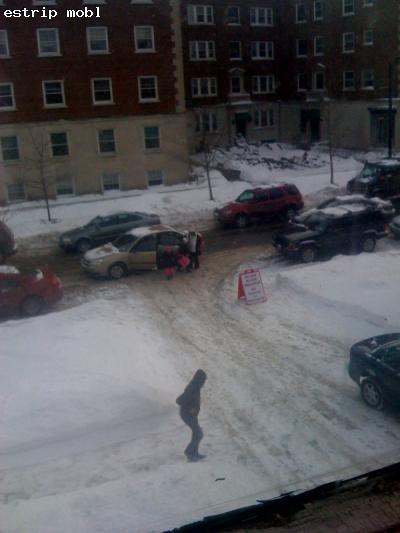 Maybe that is a good thing, just hear me out. If the plow got blocked I'm sure the guy saw what lead to it, if he is a city guy maybe he passed it on to someone else. I'm not saying anything good will come out of it but maybe something might.

Seeing as one whole row is dead now, I have at least 900 of them.
It's under AppleCare and it can get fixed but seriously, I don't have
the time to not have a comp and this is the second time the laptop has
had a hardware failure. I know that I use it quite hard but going to
the applestore and giving up my comp for the weekend is not convenient. 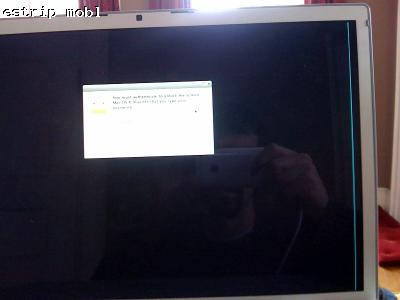 i called and made a stink once, and they sent a guy to my house to fix it while I waited... worth a try...

Just when you thought you had you tuna fish schedule all worked out to avoid having too much mercury - it end up being in yet another place. This time High fructose corn syrup.

Luckily, I don't very much of that on the diet I eat, but it is in pretty much all sweetend, processed junk food and soda. 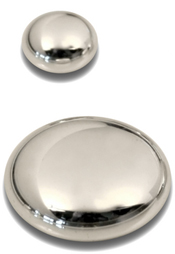 HFCS has replaced sugar as the sweetener in many beverages and foods such as breads, cereals, breakfast bars, lunch meats, yogurts, soups and condiments. On average, Americans consume about 12 teaspoons per day of HFCS, but teens and other high consumers can take in 80 percent more HFCS than average.

"Mercury is toxic in all its forms. Given how much high-fructose corn syrup is consumed by children, it could be a significant additional source of mercury never before considered. We are calling for immediate changes by industry and the [U.S. Food and Drug Administration] to help stop this avoidable mercury contamination of the food supply," the Institute for Agriculture and Trade Policy's Dr. David Wallinga, a co-author of both studies, said in a prepared statement.

Damn, high fructose corn syrup is like the main vegetable in America, besides french fries :) I'm a salty person, I don't get why they put sugar in everything.

At wegman's the other day, I saw these cuisinart non-toxic, non-stick
pans. They are so smoothly non stick. I wonder if they are really
safe. 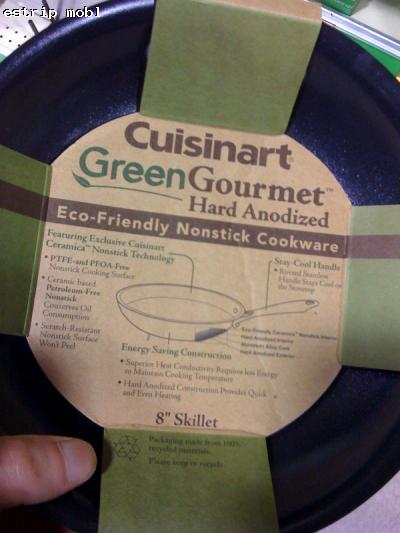 I got one, they work good! not sure how safe they are, but I feel like a badass.

I think I have almost perfected my whip cream dessert with the
addition of Sicilian blood orange. I missed the merengue base of the
previous iteration as my beaters are not strong enough to make it ;( 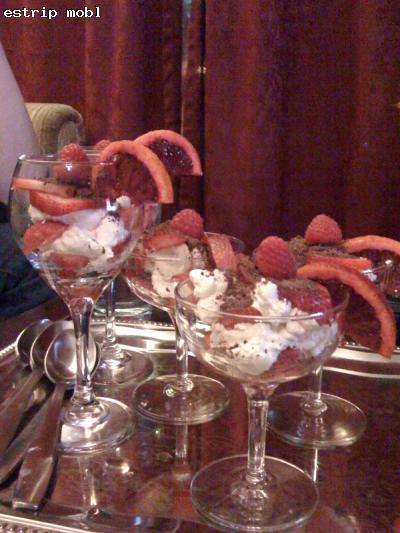 better than my souffle????

I sure am concerned, but Wegman's has a sign saying theirs in not
implicated in the recall - yet. I hope so because I am sure any food
born illness would kill me.

On an unrelated note, they now also have grass fed, organic, NY strip
steaks for about $6-$7 each. 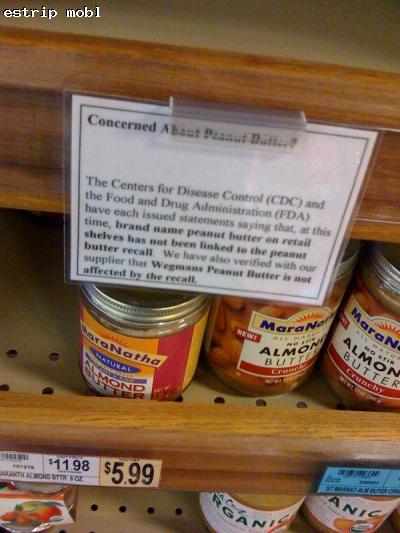 Category: church of the ascension

I know that no one can do anything about the parking situation created by the linwood dance camp at the Church of the Ascension on Linwood. Therefore, I am just going back to documenting it for fun. Today I got some great video.

I mean you can only tell people so much, and seeing as they have nothing to lose by not following the rules, why would they? One thing I have learned as an adult is: rules, without punishment for breaking them, have no meaning.

Despite the sign that specially says no stopping in or blocking driveway - in giant red letters - and the multitude parking spots
available around the driveway - this dance camp parent decided it was okay for her to park across both driveways for five minutes during pickup from the linwood dancecamp. 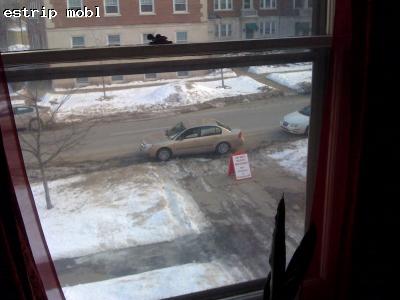 It wasn't nearly as bad as the fifteen car traffic jam caused earlier
when one parent double parked in front of the driveway and then
another parent triple parked next to them. You cannot just park in the lanes of a street, ever - on any street. 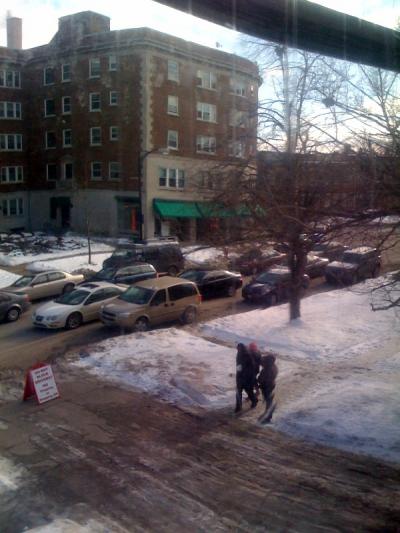 Even if each parent only parks in the street for five minutes but 30
parents do this - you are talking about a major traffic situation.

They didn't even move despite the other cars beeping, despite
available spots all around, and despite cars being backed up to
north. I think come spring I might get a louspeaker and embarass them by calling them out. At least it would be entertaining.

I really can't understand these peoples blantant disregard for parking rules and especially not the disregard for actual traffic law. Not when there are spots so conveniently located all around.

You guys don't suck. I realize you put forth effort to try and stop it and I am not mad at you, Armand or Karen. There is only so much you can do.

For the driveway, the giant sign with red letters should be enough. And even if they didn't care about the driveway, everyone must realize that you cannot completely block a street with car beeping behind you. They must just no care.

Paul, sorry we suck so much.I'm printing out the pics and am going to show them to Karen and Armand and hopefully she can kick things up a bit. Let me know if there are any more problems with the camp please.

Water balloons in this cold weather would be awesome!!!! I wonder if the water would freeze to things before they came out. It is to bad no one on the street has a two truck that would solve the problem. Once two people had the cars towed to a lot where they had to pay to pick them up, the problem would never happen again. I wish I was the kind of person who knew people cause I would go out and (they will be in Buffalo on Friday and Saturday) get a Monster truck and park it in the drive way. That might give people the message. I wonder if you video people breaking the law and posted it on youtube what would happen. It could just make things worse.

that would be too funny, you would HAVE to record it!

that's it, i'm going to blockbuster to get vanilla sky!

That is a pretty song

Which song was it?

nevermind i found it

paul can you ask someone at the house what sigur ros song that was playing in the background the other day when i was like "oh my god i love that song"?

just make sure you get that loudspeaker by march 15th so i can join in!

We had my birthday dinner at my Parents house last night. I asked for lamb or seafood and got both lamb and seafood. We had lamb and cod wrapped in procuitto plus shrimp and smoked salmon.

The lamb was so yummy. It all was yummy. 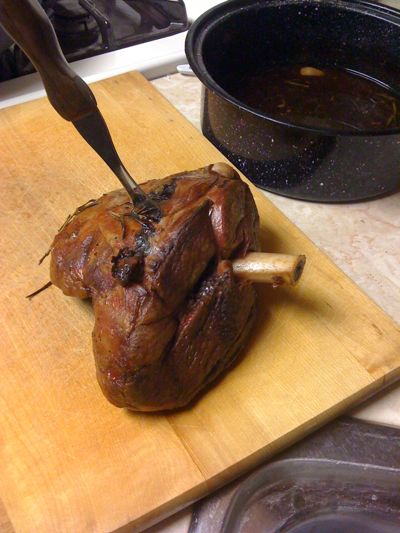 My mom forgot to bring out the shrimp cocktail with the meal, so we had it with the pre-cake desset course. 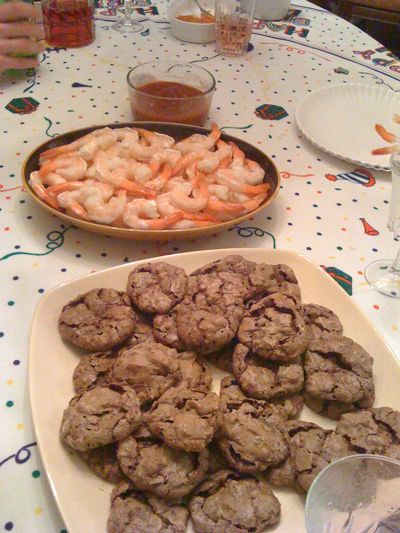 he could find at premier - which was awesome. 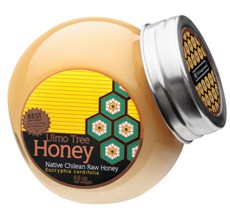 I could never figure out why this box is like twice plus the price of their already expensive ortiz can not in the red box. Turns out the red box is only belly meat, also known as toro in sushi bars. I can't wait to find out. 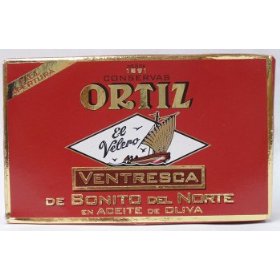 Here is a description:

The fatty belly of the tuna, this premium cut is familiar to sushi lovers as toro. Exceptionally flavorful, meaty and buttery, ventresca fillets are a luxury best reserved for eating unadorned, with a bit of olive oil and lemon juice or alongside a salad. Most ventresca comes from tuna imported from Italy and Spain. It's hard to find.

Wow. Pre-seafood course shrimp served with the pre-cake dessert course. That has to be the best birthday meal ever!

My sister told me eating honey from local bees can boost your immunity to local allergens (trees and plants, but probably no help for cats or rabbits). It kind of makes sense -- and it must be true because my sister is the last person to believe in any kind of holistic remedy! Besides, what could it hurt?

So before everything buds in the spring, eat some honey produced by local bees.

Th etaste of the honey. It is made from a very aromatic flower.

Wow - that first picture looks like a cooked heart pudding with a stake through it. :)

What is fancy about that honey?

At my parents house, we were reading this fun fact book about
presidents. Imagine if these were facts about current presidents. 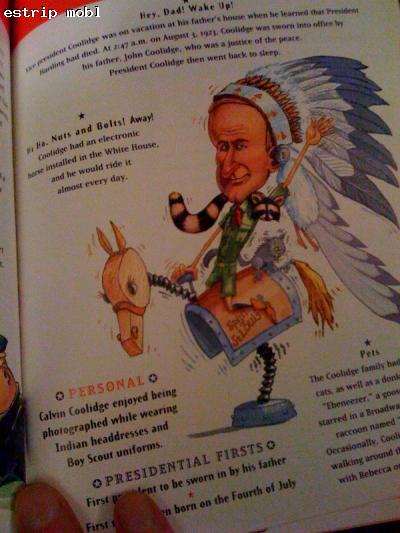 Calvin Coolidge was a super freak.