It is definately possible to have games and play of another type. For example scrabble, or Dance Dance Revolution, a great game I had about raising a hamster, animal crossing, tetris, etc. All of those games provide their players with a sense of satisfaction and masterly when played. So I do not know if the violence itself is the key to the healing power of play or if it is a sense of purpose and mastery. I realize that most Americans are not into those type of games. Do you think it has something to do with our personal up-bringings or with our societies focus on militarism?

, we studied the video game culture in Japan and found that they have large tradition of games that involve skill outside of shooting. For example cooking games, organizing games, logic games, dancing games, etc and that their fighting games are often based more on fantasy than reality (magic powers vs. machine guns).

I noticed at the while at the local videogame store the other day that many America games are really based on reality. Lets use "Socom" or "Counter Strike" as an example. If video games are an escape for many people why do Americans often want games that base their play on reality?

I just remembered I had a lot of money still left in my there.com

avatar's account and felt like shopping. Ironically, in real life I shaved my head because I can't justify paying to get my hair cut while in there I decided to go with a Lavendar hair-style that cost me about $3 US. 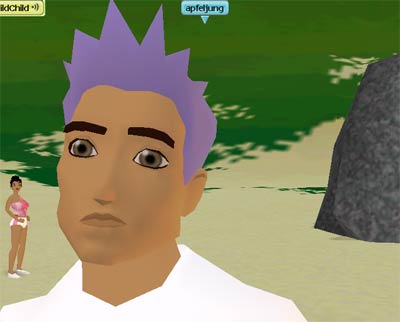 There is something really wrong with that. If you do visit there.com soon. My avatars name is also Apfeljung as in Second Life. And I look like the images above.

Well I have been working on this mask for a bit. The manager of the intended project expected something more simplistic with less detail. So now I have nothing to do with this. So I thought I would put a picture of here for you'll to look at and me to remember the hard work.

is a little less stressful. The Linden's have given our students a land grant and I have moved away from Jessie, to the militant zone.

I am really glad to have moved. It was starting to make me insane. I moved to a new peninsula in the middle of the simulation and built a new two story house. All of the students have accounts now, so I think it start getting more interesting. Jesse and I made the first test, requiring students to transport to a particular location, build a model and texture it.

We are also having them conduct an interview with an avatar that has a career that they would like to pursue. This week we will also be leaving for There.com

. I am curious to see how it goes.

Does anyone have anything they want to post to the front page? Just email me. The space is up for grabs right now.

I need to start censoring myself

In response to the journal entry below - One of my students tells me: "Besides the fact that it’s just not good form to say bad things about others."

That is the most ridiculous thing I have ever heard. If we were all just silent dissenters nothing would ever change. Should we not question what we consider wrong because it would be "bad form" and others may not like us. That is probably the most free speach repressive statement possible. Self-repression, to be implimented in the name of "good form!"

The militarization of my cyberworld seems to be continuing . . . I am so dissapointed in this development. My response is to buy more land and create more protests. Here is an except from my Second Life journal at tempreal.com 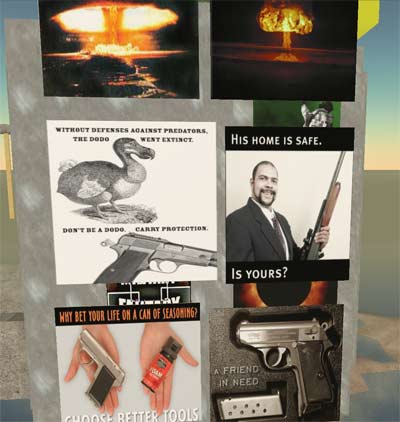 Well the soldiers are still angry at my distaste for military fantasy. They put up pictures from the NRA and atomic testing. 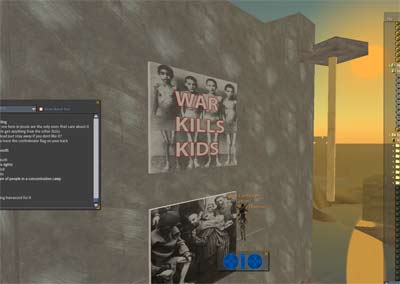 I response I got angry and put up more pictures of children hurt in war. They freaked out and started shooting, not me, but the pictures of the children who were hurt in war. That is so beyond insane to me. It was sickeing to see people shooting holocaust victims in jest as target practice but I firmly believ that I will make them feel guilty someday or at least cause a major controversy. One of the Linden(the people in charge of seocnd life) came to take down my pics of children wounded in iraq to take to their lawyers. They needed to find out if it was permitted. I think it better be, if they are allowed to have picture of atomics bombs and guns. Why not show the reality. Its is what war is about after all, right? Its not just about playing guns. 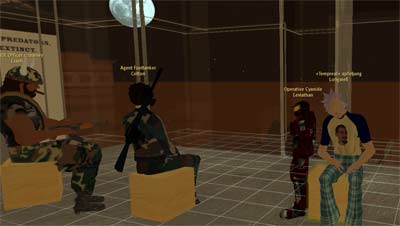 So we broke down after hours of them shooting me and decided to talk. Honestly, most of them are seriously dumb. Some of them are really intelligent.

Here are some scary quotes form our converstaions.

Why they believe the confederate flag is not racist!!!


Voting Machines - WE FINALLY AGREE ON SOMETHING

So you might want to check my SecondLife temp:real journal if you want to know what's going on right now.

I will break it down here for those of you who do not know SL. SL is a 3D, video game engine based, world. In SL you can create worlds, communities, businesses,etc. You develop a real online presescence and can have property, group, vote, design your character, etc.

Recently, I started teaching an online course at UB with Jesse Fabian, using SL, as a place to 3D model and script for class.

Mostly, SL is like livivng in an art community, where everything is built by the inhabitants. Second Life has has nothing to start out with. New land is like an empty landscape.

In the world there are no hitpoint, etc as such that you would typically find in a video game. That is except in the land named Jessie.

Jessie is the only seriously militarized zone in SL. It confuses me why people who like military fantasy games would choose the SL engine. It seems like engines such as unreal, or quake, etc would provide much better military strategy type fun.

Taking inspiration from Anna Schleuner's Velvet Strike project, I began purchasing land in Jessie, erecting monuments to anti-militarism and then abandoning them. Well, at first I tried to inhabit them but was slaughtered. Eventually I began to build a giant fortress toward my protest effort and in order to protect me while building my monuments.

This made the "army" de Secondlife really angry. Eventually, they sent a spy who I trusted. He threatend me and wanted money for protection. All of this angered me in return. Ironically, my emotional response was to crush them but then, even if they lost they would be winning idealogically, by dragging me into their military fantasy.

So I decided to just leave the giant anti-war monument and add images of children of wounded children from real world war. I am so sad that Parts of SL have come to this. I have to say that I am actually starting to prefer there.com and think that when the class is over, I will abandon SL in favor of the isolated protection that there.com capitalist fantasy bubble provides. Its kind of like Disney World vs real life.

I know that I could just avoid the land of Jessie. But knowing its always there, really bothers me. Why did the makers of SL sell out to military fantasy? It is really an interesting question. Was it to make money off the military gaming community? If so that is really pathetic and makes me wish I had never invested money in their dream, in the first place.

The military simulation community has access to so many online games where shooting, fear, and terror tactics rule. Why add it to Second Life? One of the few interactive, online worlds where people have the ability to do other things besides fight.

I understand adding paintball, like in there.com or sports -even sword fighting. But machine guns, al queda style training camps and camo gear is unecessary. Plus the constant threats and emails I am getting for having had a peace sign.

Something idiotic made me trust a spy who I later witness double agenting on me. He ended up stealing my money and causing estrip some serious grief to the point where the person playing him decided to just stop.

The spy tried to sell me the same camophlage helicopter he sold to the army. I told him I thought it was ugly and he seemed angry. I am just honest. If you are playing never trust Nicko Snow or Craig Thompson.

In the end I would like to see an end to militarisation in Secondlife. I think I am going to start a petition. In reality, I think I will just end up leaving, which is sad - I thought it had so much potential and tried to sell the idea to so many other visual artists and academics.

Maybe, I should just try and start my own simulation for non-violent artists.

This is a great picture 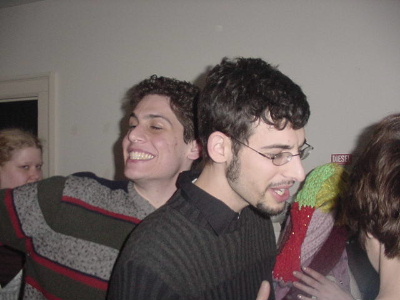 This is a great picture of Michael and I. We both look really happy, especially Michael. Apparently, it was a happy birthday for everyone.

Wow (e:mike) looks so young in this picture. 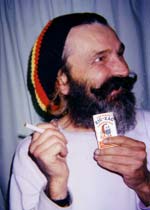 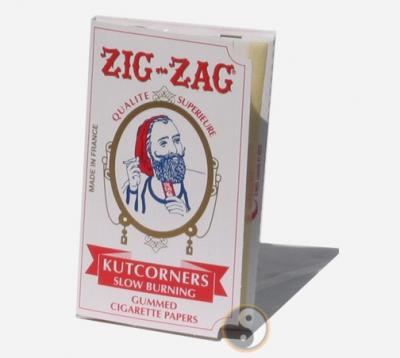 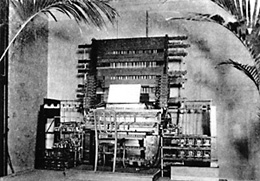