I went to go see 300 today with some buddies from work. I liked the imagery a lot. The prince of persia was like a drag queen out of drag. 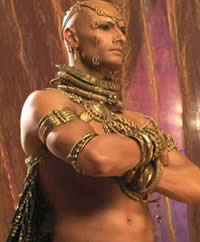 What was the message? It seemed to be that if we want to defend democracy from the middle easterners and asians, we need to send more troops in to aid our warriors, which are superior and full of honor but outnumbered.

If we don't we are going to have to do this whole thing again in the near future with a larger force.

Maybe that wasn't really the message at all.

Here is another article in slate

saying that it would be even more amazing if it was unintended.

But what's maddening about 300 ... is that no one involved-not Miller, not Snyder, not one of the army of screenwriters, art directors, and tech wizards who mounted this empty, gorgeous spectacle-seems to have noticed that we're in the middle of an actual war. With actual Persians (or at least denizens of that vast swath of land once occupied by the Persian empire).

If 300, the new battle epic based on the graphic novel by Frank
Miller and Lynn Varley, had been made in Germany in the mid-1930s, it would be studied today alongside The Eternal Jew as a textbook example of how race-baiting fantasy and nationalist myth can serve as an incitement to total war.

Some other people have said that statement is so outrageous, but if you ever take the time to study propaganda in cinema, you will learn that it was often used to get people used to the ideas the government wanted to implement or to rally people into supporting the governments causes.

You can definitely disagree with someone's interpretation of a film but to suggest that a big studio movie based on a historical narrative is "just a movie and nothing more" is ignorant. No media can exist totally out of context of the environment in which it was created. Did you never take a film history or literature class? I mean maybe the message is just stand up for what you believe in, but it is something.

Do you really believe that someone who got far enough to get major studio funding never studied film, never considered the relationship between the symbols they create and the messages placed upon those symbols intentionally by them or unintentionally by society.

Quotes from the film maker in the LA times article :::link:::
------
But reality did intrude slightly as the studio and filmmakers considered the contemporary resonance of the film. "There was a huge sensitivity about East versus West with the studio," Snyder said. "They said, 'Is there any way we could not call [the bad guys] Persians? Would that be cool if we called them Zoroastrians?' "

In the seven years he worked on the film, he said, "the politics caught up with us. I've had people ask me if Xerxes or Leonidas is George W. Bush. I say, 'Great. Awesome. If it inspires you to think about the current geopolitical situation, cool.' "
---------
Looks like he was happy with people thinking about it after all. What major film maker wants people to think there movie is meaningless!

I think movie reviewers have pretty wild imaginations. It's a movie, nothing less, nothing more. If someone wants to inject their own myopia into a movie review then I don't much care.

In a story in Mondayâ€™s New York Times, Michael Cieply writes that 300 is being viewed as a commentary on George Bushâ€™s war. Itâ€™s not hard to find parallelsâ€"but you can easily make the case in whatever direction you please (Bush as the implacable Xerxes, Bush as the freedom-loving Leonidas). I canâ€™t take any of that too seriously. Still, if it provokes a lively argument around your watercooler on Monday morning, go for it.

Millerâ€™s graphic novel (with colorist Lynn Varley) was published in 1999, and plans to film it began soon after. It clearly predates the current war, and even the Bush presidency. That it comes out when it does, at a time when more and more Americans are growing heartsick at our involvement in an ill-planned war whose casualties seem to have no end in sight, is an accident of Hollywood production cycles. At a press junket for 300 in Los Angeles last month, I asked director Zack Snyder how he felt about his movie, with its cry â€œPrepare for glory!â€ reaching audiences at a time when they have a real war on their minds.

â€œI guess thatâ€™s unavoidable,â€ he sighed. â€œIâ€™m not going to pretend to be like, â€˜Whatâ€™s that, Iraq? Thereâ€™s a war going on? What are you talking about?â€™ Thatâ€™s a reality of the world. I tried to make a movie that looks at the nobility of conflict, that asks if there is such a thing. I didnâ€™t do it in relationship to whatâ€™s happening now because I donâ€™t have that much foresightâ€"I wish I had. The point is that there can be nobility in sacrifice. Does that give context to sacrifice that weâ€™ve maybe lost in the muddle of our current situation, is there a way to get that back? And also, the story is 2,500 years old. Does history have some bad habit of being a big circle? Yeah. But is that part of my design? I donâ€™t think so.â€

I went to go see The 300 today and really enjoyed it. I thought it was a great war movie. I don't know as the movie has a message. But if it does it could be that Your great enemies are those who don't conform to the leaders or armies beleifs. The hunchback wasn't able to fight in the army so for greed he turned to the other side and Just blanked on the other traitors name who was found to be a traitor was found out and killed also. But the main message was it is ok to die and to know you are going to die if you are protecting freedom. There was a constant theme of Spartans being wariors and noble and the other armies just being slaves. If you compare this movie to bush and the us military we are the Persians. We are the empire that are invading an innocant country. However there is another part in the movie where one of the spartans say they are civilised and their enemies are not. Often the stratgy is used by countires or governments that want to kill other people. Cause if you make that other place or those other people less then human then killing them isn't as big of a deal. I also found it interesting that one of the spartans used an asain point of view about dying a good death. Well I should say Samuri philoshpy actually. If one dies fighting a worthy fow then they die with honor. In any event I thought it was a pretty good movie, now that I talked about it here not sure what I will post about.

I saw they talked about both sides in the New York Times. I still thought there were any more parallels between the US coalition and the spartans. Especially since the spartans were defending the western ideas of freedom and democracy from the eastern mystics of persia and asia.

You could also read in that the Athenians were the coalition forces that pulled out. Then there is the scene where the king of sparta dies in a christ imagery pose, "nailed" to the ground.

funny, a lot of the reviews i've read seem to take the angle that bush is actually the "drag queen," bringing war to people in far off lands...