We replaced the garage lock with another lock I had laying around. Ironically it was called defiant, and the only way it would work was upside down. 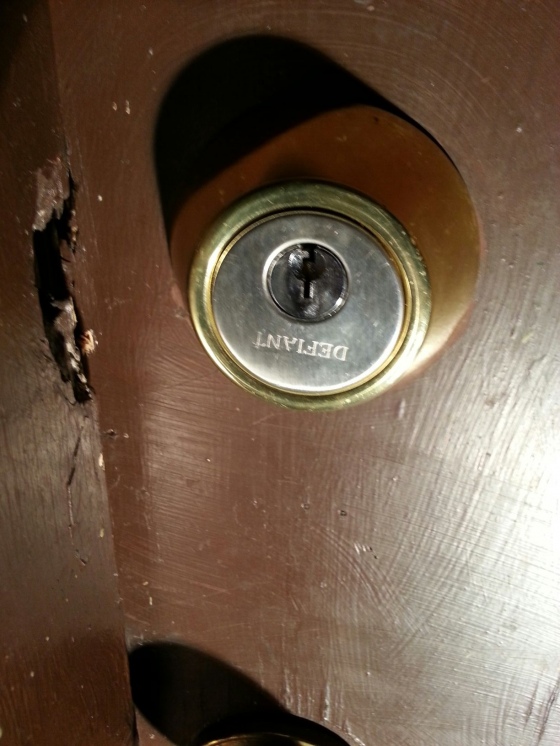 haha. that seems like the type of situation that is typical of my life. i had to to the lock out of the front door of my house once to have a new key made and its hard work with only two hands. i was pretty proud that i was able to reassemble it by myself.

At least I hope so. Its finally up for sale and the realtor seems to think it will go quick. I am ready to close that part of my life. The lawn got so long that snakes started growing in it. There were two of them. I thought the first one was tiny but then (e:terry) found the tiniest baby one.

Its so crazy because for years the grass would never grow because it was mowed too much and became a muddy weedy mess. Now its thick and when it was cut it actually looked good. 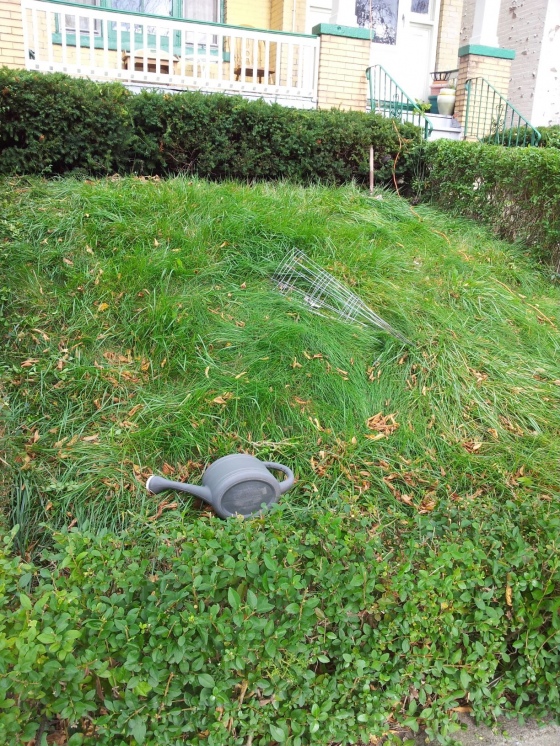 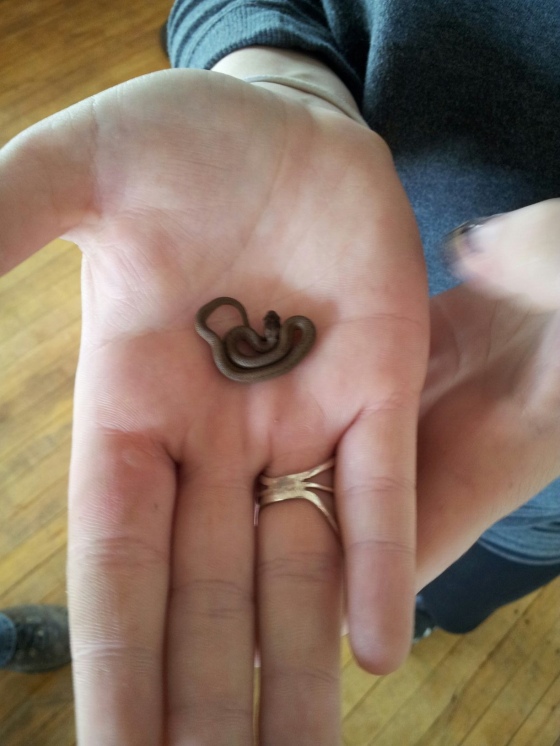 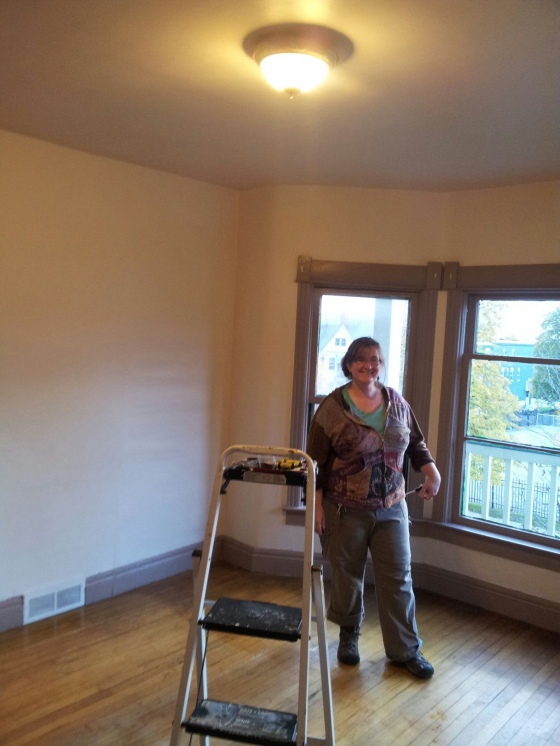 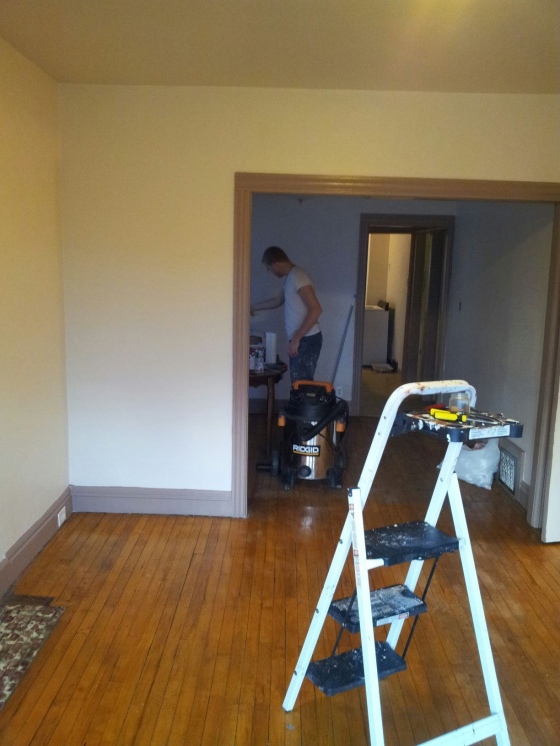 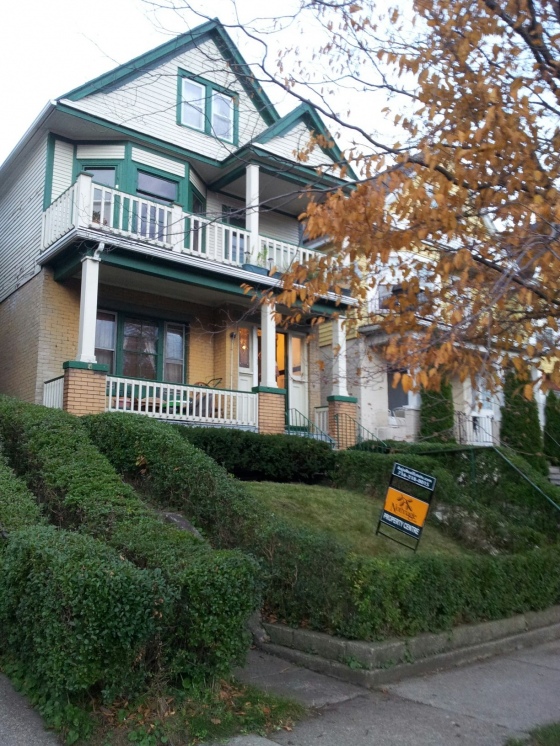 We literally cleaned from the moment we woke up until 5 minutes ago. I steam cleaned all the floors and Terry even washed all the curtains and blinds. I finally emptied out the closet under the stairs. I had waited so long to have a home for the vacuums. At the very back of the very bottom of it I found the key for he drill that I lost maybe the first week we moved here in 2006. I was almost at the point of throwing out the drill. I am glad I didn't.

I must have emptied out 10 giant canisters of dust from the vacuum. 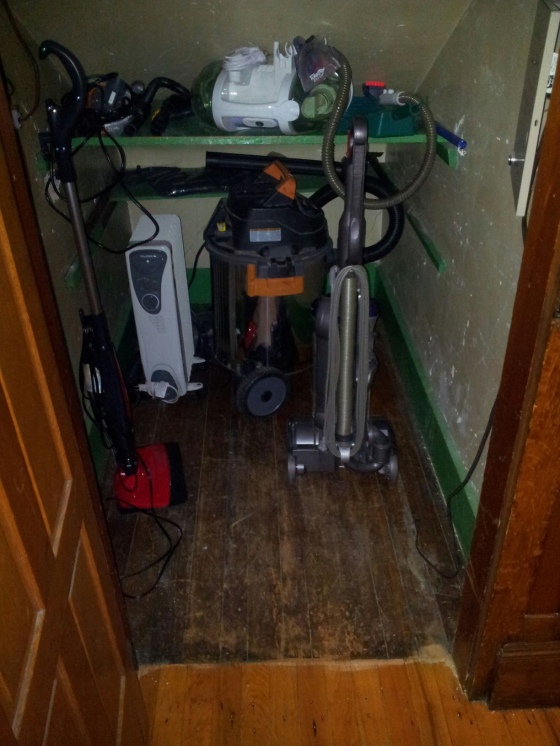 The sink was clogged. Plunging it I found it filled with dirt. I can't device if this is topsoil or just the dirt we washed off ourselves over the last couple years. 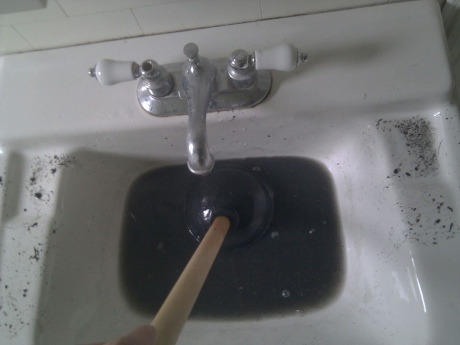 I think water itself has that many sediments. Didn't you tell me that there was some serious grime on your water filter.

I got shocked the other day turning this light on. A bunch of fire came out the side. So today I took it apart to see. Damn was it frayed. The datestamp on the light said made in the USA Nov 26, 1907. 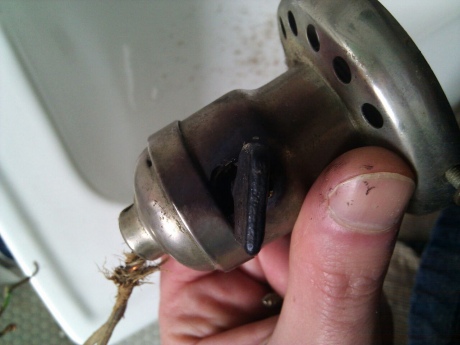 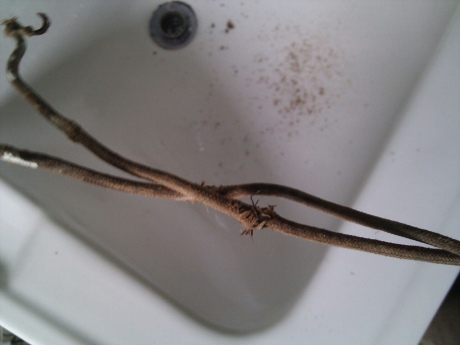 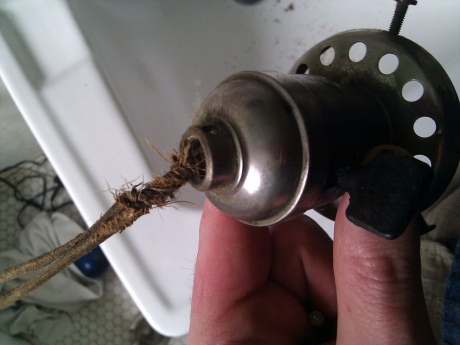 WHOA. you should totally sell it on ebay and claim that it is a period antique designed and hand-crafted by Edison (it probably was!)

we should probably check the matching light on the other side of the mirror. its got to be just as old.

I was just saying how everything is broken on (e:leetee)'s journal. Today the furnace decided to shut down too. That makes a broken stove, broken tv, broken car, broken furnace. I seriously can't take one more thing.

At noon we get the new car. This is totally overshadowed by the lack of heat. Unfortunately, I can't get a hold of our friend that installed the furnace. Anyone know a good company I can call?

Yikes - looks like you had a rough weekend! Did you get it fixed? Whom did you call in the end?

That sucks so bad. At least you can close yourselves off downstairs! The furnaces always break on the coldest day of the year. I hope it isn't too costly for you guys.

I really like this twist in the upstairs bedroom floor. I have a feeling the floor under the current floor in the dining room and living room is something similar. 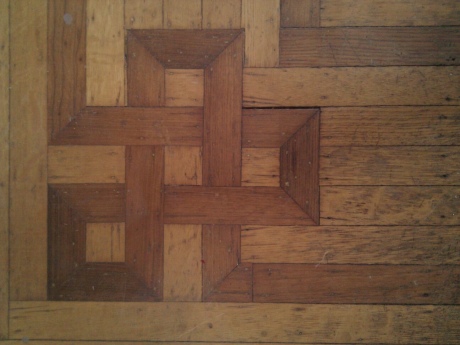 Wait... what do mean by floor under the current floor. Do you mean to say that the shiny wood floor is masking this wood floor with patterns?!

i can't belive how annoying it was. 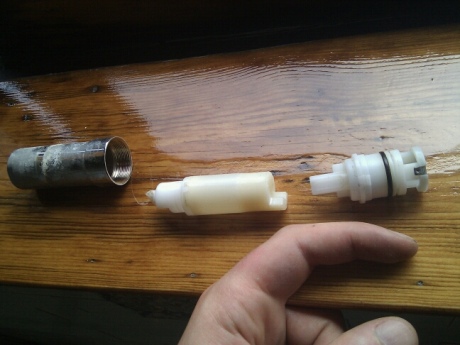 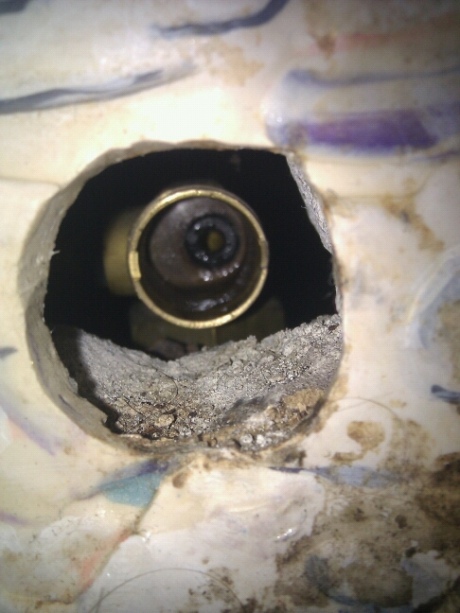 I spent all day trying to stop a persistent leak in our shower. After struggling a bunch it has ceased to drip. It doesn't look pretty, but then again that bathroom does not even have a floor. I can't wait to redo the whole thing once we are done with the outside of the house. Maybe next year with my tax refunds. Damn, that sounds so far away right now.

The inside was disgusting

All hope is lost, the inside of the mansion at 23 North was disgusting even for $149,000. I would probably cost like 1.3 million to remodel it and would require cranes, something I refuse to need. I went and took a look at it during my break with (e:matthew) and the guy from Holcbery, the realtor. It was a fuckign disaster. Everything was not original, everything was tacky and broken. Honestly, the radio tower, outerbrick wall and parking lot was all it had going for it. In one area someone had shit on the wall I think. 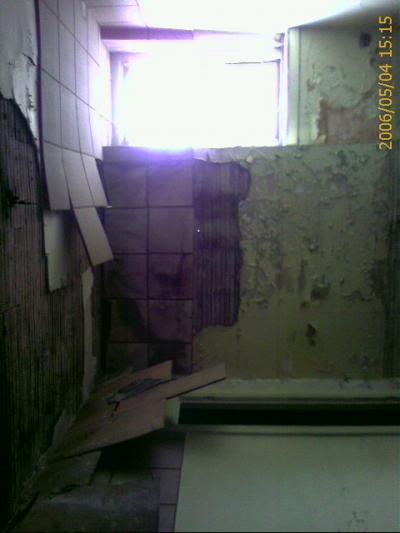 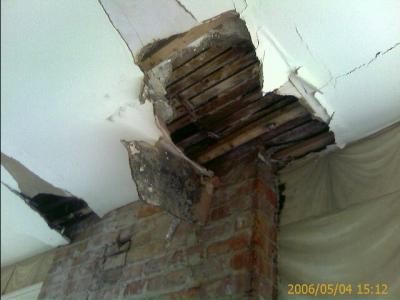 All it had was this one pretty thing left. 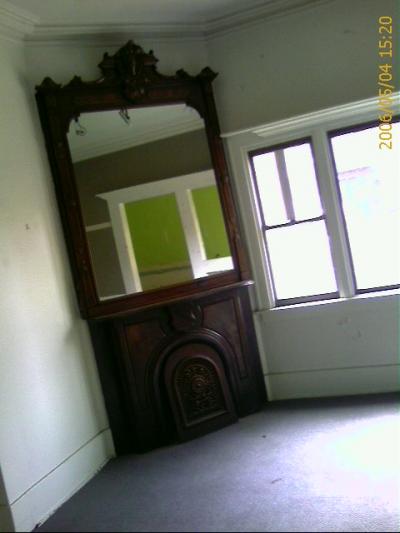 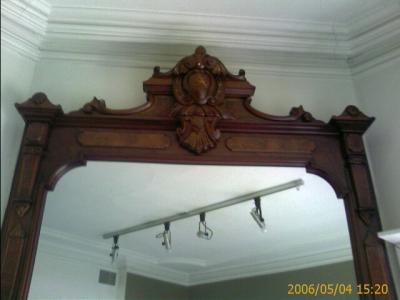 I honestly smell like the side smell of the interior and it won't come off my clothing. I think even (e:matthew) is over it. 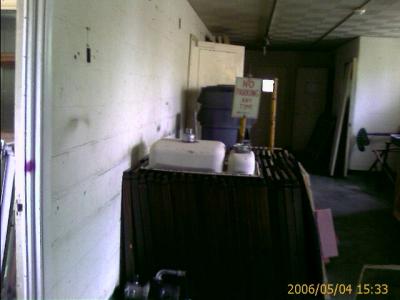 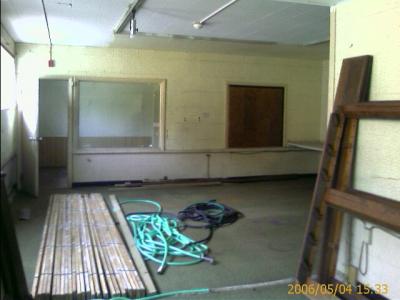 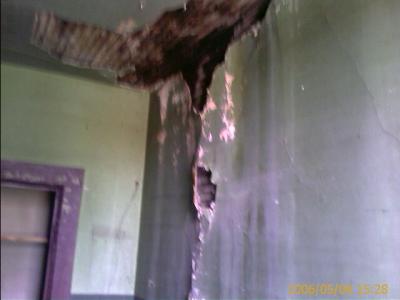 If it was an empty burned out shell of the brick wall it would have been better but I can't imagine halling out and tearing out the thousands of layers of nastiness, not to mention it was so moldy that there were actually mushrooms growing inside, which means you can't just cover stuff over.

Thats what that moldy smell was at Hallwalls last night! ;)

How in the hell did that get into such disrepair? That saddens me.