That is besides (e:terry). Look how nice our sidewalk is and how it
abruptly ends.

The one place that is totally clear is the Bank of America between
franklink and delaware. They gave heated sidewalks. How much energy
does that take? 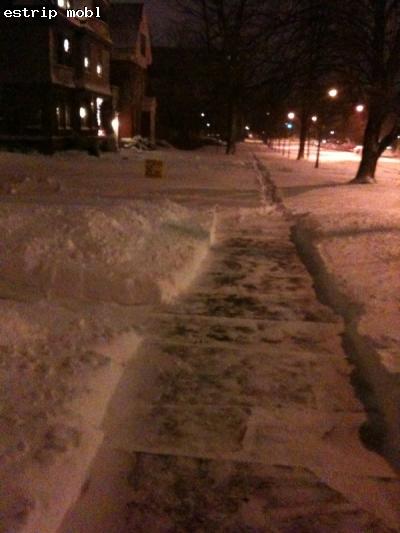 I need to wear my snowboots but they make me so clumsy in the snow.

I have a snow blower so doing my sidewalk is very easy and I tend to go up and down a few houses as well. The house next to us does not even do their driveway. When I run up and down Main Street in Amherst it amazes me as to how many people do not clear the snow in front of the house. I usually am motivated by someone falling and then suing me. This does not look to bad but if we get more snow on top of this and that gets packed down you are looking at a real problem.

Anyone who shovels should be dropping some salt when finished. In general the people who shovel on my block do a good job of this, being a commercial block and all.

And she is ROSEMARY! She cornered me again today!

heh, the advantage of being somewhat puny is that you can walk on top of 3 feet without it collapsing under you. ;-)

Jokes aside, I know its nice to not have to walk on snow, but its just impossible for everyone to keep shovelling when you have snowstorms like crazy. I am just looking at the positive side.


Its interesting that you mentioned trousers getting wet. I think snow here must be more powdery than Rochester because I can usually dust it off as soon I reach a stand-still on the way (red-lights, destination etc.) If you let it build it eventually makes for a lot of unpleasantness so the dusting off trick at regular intervals works well.

Unfortunately city code does not agree with you (e:Tinypliny). Supposedly you can be fined for not shoveling, though this is apparently not much enforced. I want to see you have the same sentiment once it is 3 feet high instead of one foot. :p

Aren't your feet cold and wet all day from pant legs getting soaked in the snow?

You shouldn't too. Pardon my anti-shovelling sentiments but I think shovelling makes walking more dangerous because ice is more likely to form on the wet cold ground than on powdery snow. I slip more often on shovelled pavements than non-shovelled one. I can walk top-speed on snow but walking on shovelled icy surfaces is such a disaster in the morning. I have skinned elbows to prove it. :(

If that shit is still there tomorrow call 311 and report the mother fuckers.

First of all raisins never had cholesterol. Second why can they sell
12% malt beverage with caffeine but not wine at the gas station. 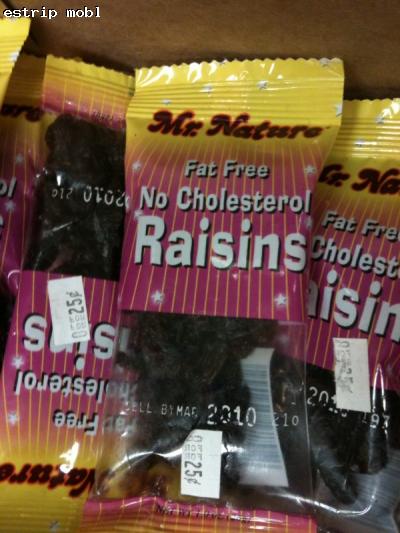 I wondered what that tastes like but Haven't tried it. I have Tried Joose and it is really strong and lasts me a long time. I know recently year wise that a lot of the laws have changed, used to be no beer before noon on a sunday. It also used to be that molson or was it labatt had that beer that was to high of a % to sell here and you could only get it in Canada, you can buy it here so that would mean that rule changed. Not sure how they say what is Liquor and what is beer but there is some way that they do.......

Yes, and apparently Bananas are fat-free according to stickers on them.

I am scared to think what they need to do to bananas to make them *Really* fat-free.

I have a web cam of time square app for my chumby. I can't believe
how it is always busy. Not a moment goes by with it empty. It kind
of gives me anxiety and I am not even there. 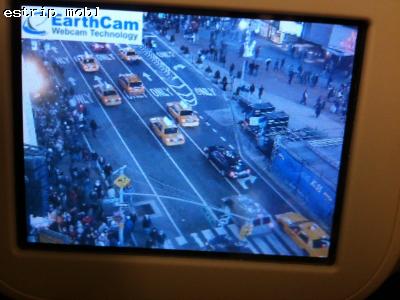 One of my favorite things on the planet is going out late enough to just catch the last train out of Grand Central. The vast empty streets of Manhattan are beautiful.

Ive almost broken up with two people over Times Square. I hate it.

My face froze so bad walking down main street. That is main street
behind me in all white. 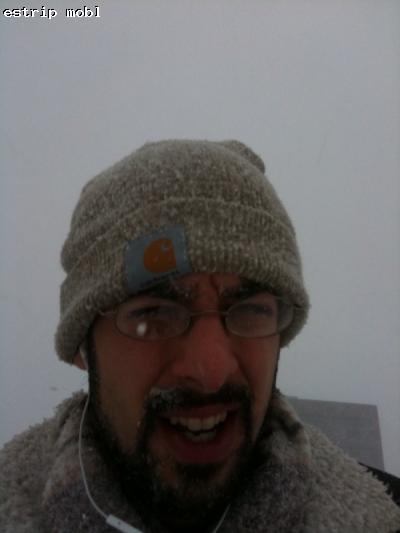 Even in this HORRIBLE weather people were not not wearing long snow coats! What is WRONG with long snow coats?! Seriously, am I missing something here because my coat always reaches my knees or beyond.

It was CRAZY out there today!!!

Why can't they just shut up?

I sometimes feel bad about it because I judge christians as a group
before getting to know them as individuals while at the same time
complaining about them doing the same thing to every other group. I
recognize the hypocracy in that.

That being said, it's things like this that make feel this way. I was
searching apps for the iPhone and found one that showed you local glbt
events, clubs, etc and somehow christians had decided to download and
negatively review it in moral grounds. I constantly blows my mind that they fixate on the gay thing when the bible barely does. 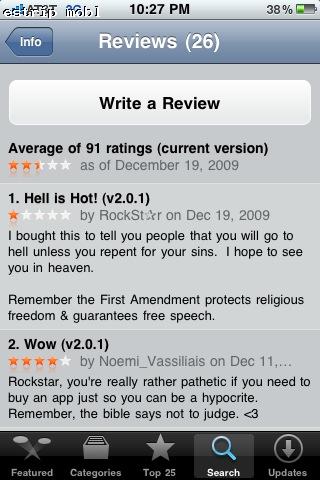 As soon as people begin to rate apps on moral ground, it ruins the whole app rating system. It becomes much more difficult to tell what Is legitemately a lame app and what some people morally oppose. And its not like I can't understand what it feels like to be morally opposed to something. The fact is, I morally opposed to shooting games but I would never vote them down in the app store because if it.

If I was the app writer I would sue those people for financial damages.

Sometimes, I wish I could just wake up one morning in a Christian free world. Maybe my first chance will be in hell. I am sure that is what they are thinking.

I think if you go to the app store online (instead of on your phone) you can flag the inappropriate reviews.

I've seen the inverse on religious apps. For example, the Mormons have various apps related to their religious culture and I've seen many bigoted and absolutely non-app related reviews. So, throwing all the Christians to the lions seems a tad dramatic.
Because the internet is such an open forum, you're going to get trolls. I just look for the reviewers who aren't foaming at the mouth and then base my judgements on my interpretation of those various reviews.

Oh that is the last straw Jim. I have tried to be a nice guy, but this is just too much. You want to play like that? Fine. Then perhaps you wont be so happy when I tell everyone your dark secret.

Ya, that's right Jim. I went there!

Kidding of course, you're an awesome dude :)

But James, in a world without assholes we'd miss you a lot ^_^

I sometimes wish I could wake up in a world without assholes. Then, all the Christians left would be quite nice people.

Be assured not every Christian out there is going to be a jack off about an iPhone App. It's sad these ones were, though. And you make a good point about the war games, I know you don't like those. I'm not sure how you fix the ratings system.

Lost in the suburbs

(e:mike) and I got lost in the suburbs. I seriously don't know my way
at all north of the 290. 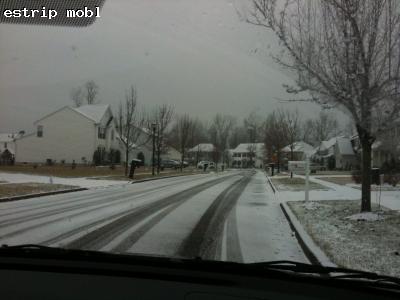 Santa came to visit last night. Here he is with (e:mike). 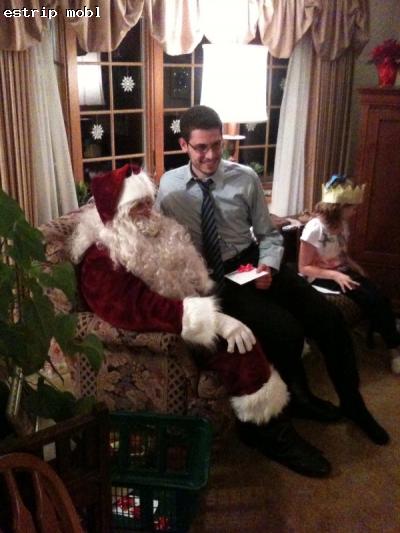 Wow, do you guys get all dressed up every year for this? I actually think that's rather nice.

(e:mike) is so cute in that picture!

Is that going to be on sketchy santas? I love how he told all the kids about how he had just seen the boys and girls who lost their daddies in iraq as soon as he walked in the door.

I can't stand that fucking disgusting Lee Nails cancer cloud shop next
to sears. I smells so toxic. It's not just me being sensitive. If
you sit and watch, many people run by with their mouth covered. The
worst is if you get stuck on the escalator next to it, behind a slow
person. The cloud now extends further into the mall now. I can't
believe the health department doesn't shut the scumbag down or at
least make them get better ventilation. Imagine the poor ladies that
work there.

The whole reason I was there was that I had to go to the apple store
this morning because my MacBook pro's fans began to sound like a
motorcycle again. It's so frustrating to drop off my work computer
and know it's not coming back for a while. Sometimes Whn going to the apple store I come from the other side of the mall in order to avoid the toxic cloud from Lee Nails.

I Imagine it would be bad for business at Sears. One time I bought stuff at Best Buy instead because I didn't want to have to go past the smell.

I was terrified the mall would be jam packed but it really isn't. I
guess it is pretty early and it's a workday. 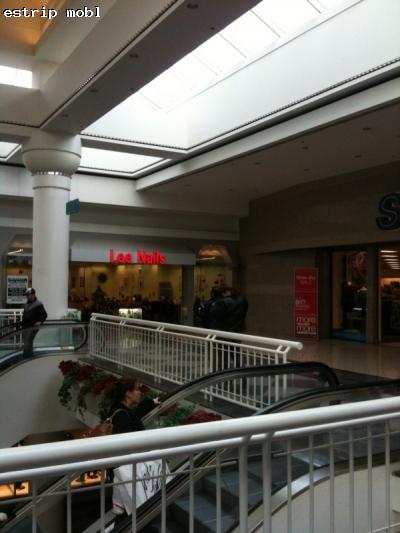 The smell is heavy concentration of acetone or something. Most every place that does nails has that smell; it makes me nauseous.

Best Buy, especially the one at The Galleria makes me ill (headache, nausea) as well. The smell is noxious-- can't tell if it is the carpeting, the electronics or what.

Which is sad, because I LOVE browsing electronics stores.

Also, how would you know unless you were also sitting and watching?!

Sorry to be mean but I think everyone this side of the pond totally lacks elevator etiquette.

Reeks of nail polish and solvents.

Hold on. What does it smell of? Burnt nails??

I cannot believe any news site could sell out this bad. It almost makes me nauseous to see this level of advertisement for one product. 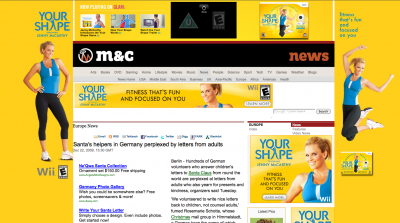 An another note I changed image upload resizing to use imagecopyresampled instead of imagecopyresize for png images and they look a 1000% better. I am embarrassed I didn't notice this before. I wonder how many screen shot uploads were shitty because of that. My second life ones sure were.

I've seen the same type of advertising on Reuters, of all places, for Acela, of all things. How on earth does Amtrak have that much money?

I tended to manually resize screenshts to 400px before but now I can just mail them in.

Despite the uncooperative body

I am finally starting to get that side muscle I always dreamed of. By
summer I am want to be ripped bit I know the dedication won't last.
Damn what a messy desk. 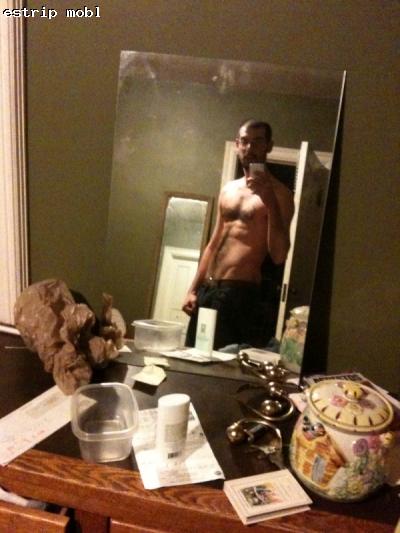 It's nice to see when the work pays off. I went to the Y today in FL and they have a pool. Swimming seems to be the best cardio ever. I wish they had a pool at Allentown. I want to look into how much it would cost to go once in a while at the Jewish CC.