No one will probably agree with any of this but I'm recording my view of the evening. 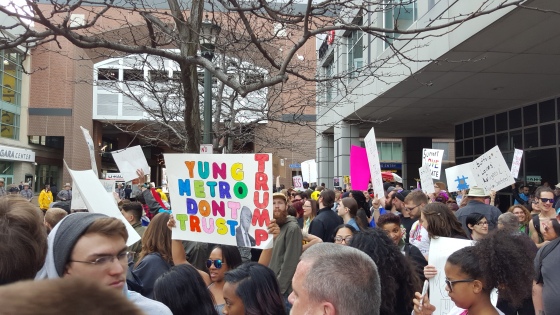 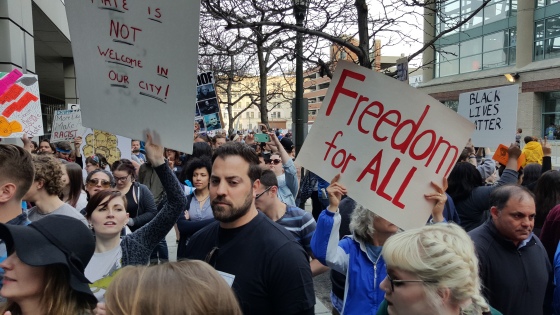 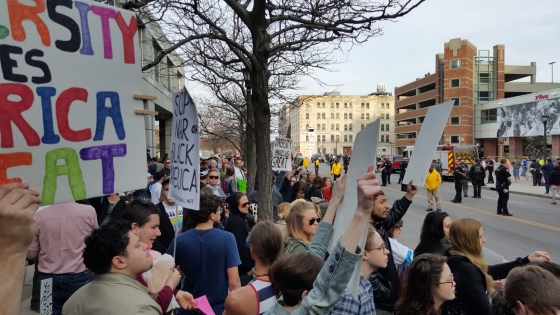 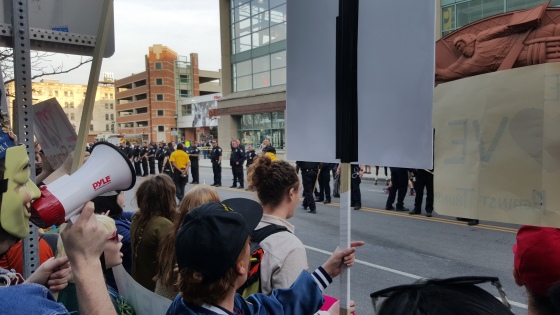 This was really the only protest I have ever been to where it was just the police protecting a building full of people and no counter protesters yelling back. I like the counter protesters more than the police because they give it some meaning. Having a wall of police you are yelling at just leads to police confrontation.

The sniper rifles pointed at our faces was a nice touch. 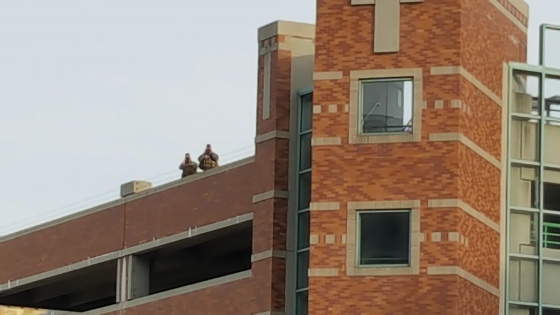 When we paraded through the merchandise area at the end I was losing my mind.

I think in some way I have more respect for the cities that get more violent. I know it's not the right thing but honestly, people should be scared to sell confederate flags in the street if a city that is half black. Without violence it puts out a message that it's acceptable. I know everyone is probably going to disagree with that, but I think if there were reprocussions they would think twice next time. I mean think how many people died defending the union against the Confederacy, how many people were enslaved, does no one remember? It wasn't that long ago that a confederate flags wernt just ironic statements made in China with a Trump stamped on them.

How did that even become a Trump merchandise item unless he stands for a straight up return to southern slavery? Is that his platform now?

Walking through that part, I literally wanted to flip the fucking merch stands over. It might have lead to a moment where I screamed at a merch person that I hope Isis murders their family. Looking back I keep wavering between feeling bad that I singled that person out just because they were close and not feeling bad because they were literally trying to make money of selling hate merch.

Next we we under a bridge by HSBC center where the police and horses corraled the protestors away from the tracks so that the Trump fans could get out.

I was really feeling angry so at that point we left for a moment to get our bikes but then I felt obligated to go back and see the end. When we got back we locked out bikes up a ways away as it was tricky having the bikes in the protest.

By the time we got back to the protest, the protesters were starting to march to the holding center because word had it that some people were arrested, we went and got our bikes again.

When we got back, we marched with the people in front but around church and pearl, the parade split in two due to some people having directions and other not.

By that point the group we ended up with was mostly a spontaneous group of protesters with #blacklivematters signs. The group was still heading to the holding center because they heard people had been arrested and wanted to show solidarity. They were really concerned, not even knowing who it was, just that it was someone who they wanted to show support for. I found that so amazing.

When that parade got to the holding center we were met by a group of white lesbians. Run on sentence, about to begin... One of the lesbians came up and asked joe and I, and some other white dude, some of the only white people there, and definately not the ones yelling at that point or with the banners, if we were the leaders of the group and if we could ask our group to quiet down because their friend was arrested and the police told them they could get out faster if there wasn't a loud protest.

This is outrageous on every level, it was almost comical.

I was astounded that she would even see the situation and say this. I responded back the protest is chaotic and no one is in control. Then I asked her if she thought she was in charge of the protest? She said that she and her group planned the protest on Facebook and she was sorry if it hadn't reached the groups we were with because they had tried to reach out to everyone.

Guess what we wernt with any Facebook group. Then she asked if we went inside the stadium because her group did, as though that made her better or more committed to the experience.

No one controls political unrest and protesting. Protest is not something that you are invited to participate on facebook or that you sign a fucking terms of agreement on.

Each person has a voice that they can choose to use as they desire. Just because her friend, who I probably know, is a privileged white girl who can go into the Trump rally and get kicked out from the inside doesn't mean that other people expressing their view, who might not even have that option, should have to hush their protest. Being at the holding center is part of the inconvenience of choosing the be arrested.

At that point, (e:Joe) could tell I was going to lose it so we had to leave. I'm ready for the election to be over.

How many polocks does it take to get a joke?

How many polocks does it take to get a joke? Apparently more than this many. These people are protesting a play called Polish Joke which is playing at Canisius' Marie Maday Theatre on Main Street.


[box]By Colin Dabkowski - At its essence, "Polish Joke" is about one man's crisis of identity over his Polish heritage, his long and misguided journey away from his roots and his eventual realization that true ethnic identity is to be denied at one's ultimate peril. It is nothing less than an affirmation, if a rather long-winded one, of the importance of embracing one's own heritage.

Playwright David Ives, in his traditionally neurotic and absurdist manner, has employed a hearty helping of self-deprecation, the standard tool of ethnocentric comedies like "My Big Fat Greek Wedding." Ives' jokes - which aim to flip standard Polish jokes on their heads by placing them within Ives' self-critical narrative-don't always hit home. But what they never do is step over the line from satire and into demeaning caricature of Polish people, as has been suggested by community members, many of whom have neither seen nor read the play.

Thomas LaChiusa gives an adept comic performance as Jasiu, the conflicted protagonist, as does David Hoffmann in a variety of roles. Director Maureen Sheldon points out in her program note that she, and most of the actors - not to mention the playwright himself - are Polish.

This fact should encourage community members who have manufactured gut-reactionary outrage at what they read about the play, or merely at its provocative title, to come out and judge for themselves. 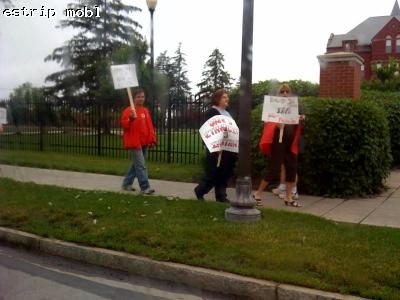 Perhaps this was a metajoke. The protestors are their own Polish joke.

The clashes began after police evicted squatters from an abandoned building that has served as a center for anarchists, leftists and punk rockers.

More than 500 people, including scores of foreigners, have been arrested since the riots started Thursday. Authorities said 207 were arrested early Saturday following overnight clashes in which demonstrators pelted police with cobblestones and set fire to cars.

The wikipedia article about the "youth house" has already been updated

This is what makes wikipedia so great. It is already updated to include the most recent of recent history. 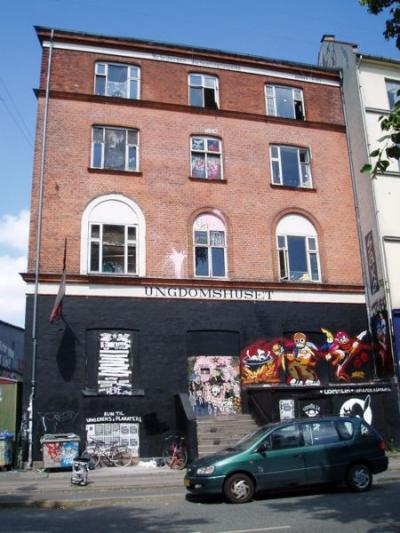 FRom the wikipedia article


In 1999 the building was set for sale to the highest bidder by the municipality following controversy on the renovation of the building and a refusal from the inhabitants to pay the rent agreed upon in the original contract. Which prodded the users of the building post a large banner on the fascade with the message: "For sale together with 500 autonome, stone throwing, violent psychopaths from hell.".

The building at the centre of the recent riots, known as "the youth house," has been viewed as free public housing by young squatters since the 1980s. The eviction had been planned since last year, when courts ordered the squatters to hand the building over to a Christian congregation that had bought it six years ago.

Vandals even covered Copenhagen's famed Little Mermaid statue with pink paint, though it's not clear if that's linked to the riots. In the past the statue has been beheaded, doused in paint and been blown off her perch with explosives.

Europe is so extreme. I love it. I think that americans can't get so crazy because first of all the police would just kill the protestors and second of all because we are so used to long term stability at home.

Here is a youtube video for calling the youth's into action


Here are photos from the building

The is a ton more info in the wikipedia article's (WIKIPEDIA - Ungdomshuset) external links section.