I am amazed at how long the lin e was at Wilson's Farms today. It seriously wrapped around and up the isle. You can only see part of it in the pic and that was at 10:43 PM. I find it ironic that the prices are almost if not more expensive than the coop. 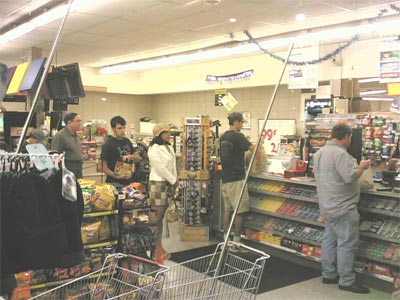 There was the usual crowd. The woman that runs the launromat cross the street, the crazy lady that told (e:mike) he needs to go fight in Iraq, and andre. It's funny that this site pretty much started it's public phase over some racist drama at the Farm [inlink]news,29[/inlink]. I wish I had a media cpable cell phone back then but this was way pmobl.

That wilson farms is like that. When I worked there you would get rushes. There would be no one in the store or in line then out of nowhare lots of people would come in. When I worked there they where the busiest wilson farms and did the most buisness out of them all. I was a stock boy and got along with mostly everybody there. I read the linked journal. I don't remember Ken working there when I was there but Managers do move around some. There is a ken who works at the other Elmwood wilson farms but I don't know if it is the same guy. I know that &quot;The Farm&quot; used to have a problem with pan handlers but once they saw the cops they just leave.

This man looks so freaky

I found it when looking for pics of head tatoos. 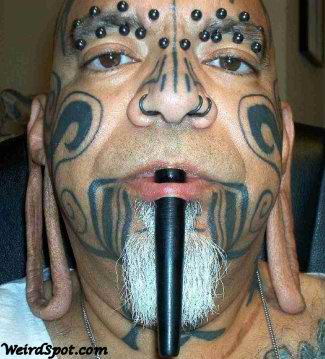 That is a little differant, hay as long as the guy is happy I can't bash him. I think he dosn't look as odd as &quot;The Eningma&quot; I wish I could remember if I posted any pics of him.

First thought that popped into my head after seeing this picture - &quot;why&quot;

Somehow everything fell into place. I am sure that I want to teach programming the rest of my life. Or at least be a programmer. No matter what language I learn and teach, everything seems to build on itself and it is all so useful. As long as there are computers, I can make anything work that I need to. The possibilities are endless and as I will only use free and opernsource languages, I will never be dependent on the software companies and their business whims. There are so many programs just waiting to be created. 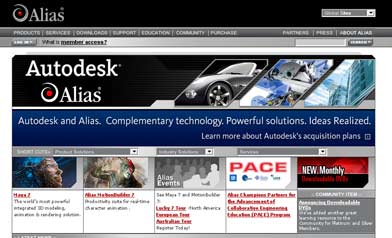 You may ask what brought on all this excitement. Well, Alias the makers of Maya were bought by Autodesk for $182 million. That is such a small amount of money for what Maya seems worth but basically it is bought in cash by autodesk the makers of 3D studio max. I hate that program, the interface was so freakin crappy. Maya and 3ds are similar enought though where one of them is going to have to die with the merger. I bet it is Maya.

PowerPoint presentation about the merger

I have no intention of ever learning 3ds. I learned cinema 4d, I learned maya and to be honest I am too uninterested to have to learn another work flow to do the same thing. When I say I learned them I don't mean that I got a rough idea how to use them. I mean I learned how to do just about everything the package has to offer. I taught them.

I cannot believe that Alias only made $83 million last year and autodesk made over 1 billion. No wonder they could afford to just buy it in cash. I makes me wonder why they did not just buy it before.

I wonder if Autodesk will kill the mac line. This is probably the most satisfying news I have heard all year. So much for industry standard Barry, we should have just stuck with C4D

I'm definitely happy for you Paul. I admire Programing and wish I could do more than HTML/CSS/SSI

So, do you want to be an &quot;industry analyst&quot; on this story too?

The elevators at some of the subway stops have been down for a long time. I realize they are putting in new elevators but it has taken an incredibly long time to get done and must be such a hastle for handicapped people. I can't even imagine. Here are the official down times.

They have a "solution" listed on the NFTA website.

Customers can use the "Call for Aid" panel by pressing the emergency button once. The customer shall inform the police officer of their location and that the elevator is inoperable.

Customers calling from the train platform level will be advised to board the next train and proceed to the next station with a working elevator where they will board the #8 Main bus. If a bus is not scheduled to arrive for over 30-minutes, customers can use the "Call for Aid" panel to request alternative transportation.

Customers calling from the street level will be informed to board the next #8 Main bus to be transported to the next station with a working elevator. If a #8 Main bus is not scheduled to arrive for over 30 minutes, a police officer will dispatch a vehicle to transport the passenger.

I also found lots of other links about the Buffalo subway system while looking for this info.

Here are some
Official Site -

While I was at UB today I heard some crazy smashing noises coming out of the student union. I thought there was a car crash but it kept banging and banging.

For some reason they were smashing cars. Only in america.

I ate lunch at the Korean place and the visa vultures were lurchng again. The bitch tried to get me to agree to an over 20% interest rate. I told her to fuck off. I wanted to spit on her bt I decided to refrain. If I was on campus more I would set up a stand next to telling the truth about interest and what it means.

I cannot stand how they prey on the freshman who don't understand. They think it's a free sandwich plus $1000. It kills me that the school condones this. I am sure they get a nice kickback. 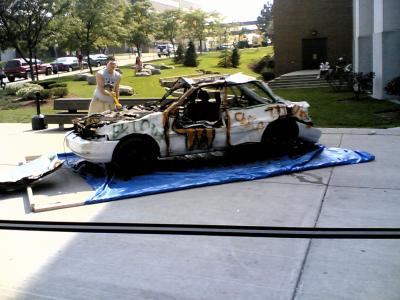 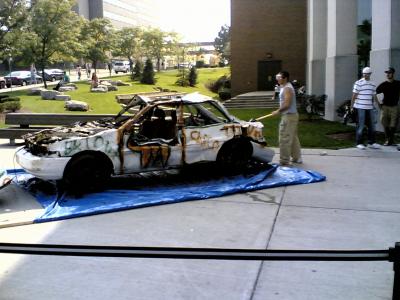 Here is a video of it.

Oh god. they were smashing a car last year too. it's ridiculous.

Yeah some of those credit card companies are worse then the MOB. They Make them sound like a great idea. There are all these hidden pit falls like that the interest bulds up and then becomes part of the amount that you owe. So it is interest on top of interest and there are so many more little tricks they use to get you.

Go read this its crazy, itll make you allergic just reading it...

Basra and I ate lunch. He ate hey, I ate a turkey sandiwch at Globe. 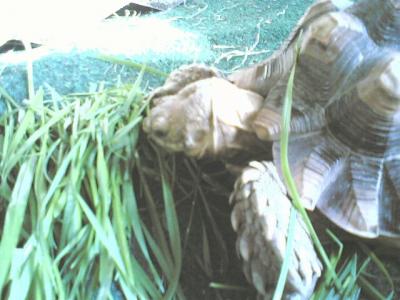 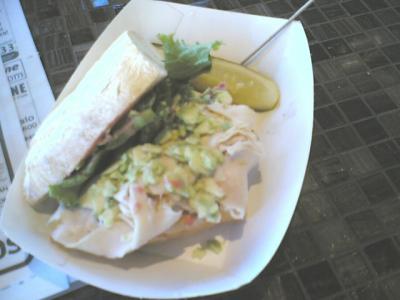 Two nights, (e:lilho), (e:mike) and I went to Ambrosia for dinner. We got there just as they were closing but they still made a yummy meal. We all got hot chocolate with whip cream. (e:mike) and (e:lilho) got yummy ones with plenty of whip cream. 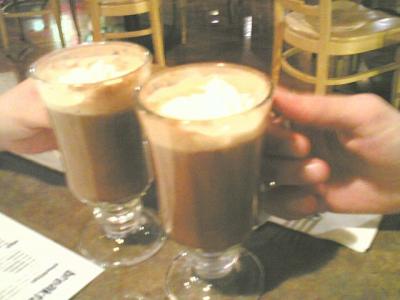 I, however, was denied whip cream. I was going to cry but decided to act like an adult. (e:hodown) used to love whip cream. It saved our friendship a couple times. 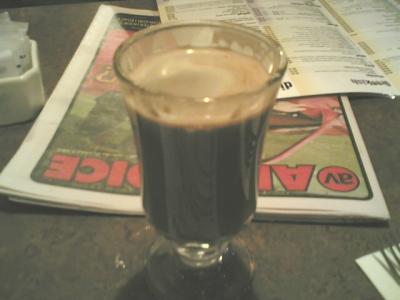 (e:mike) spilled his water all in our calmaris and all over (e:lilho). You can see the water at the bottom of the dish. 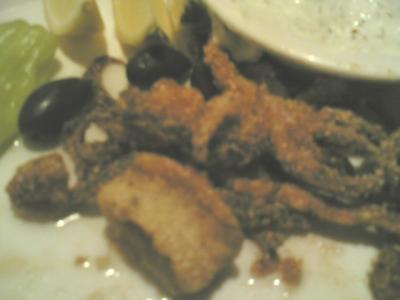 Then I got a turkey club sandwich. 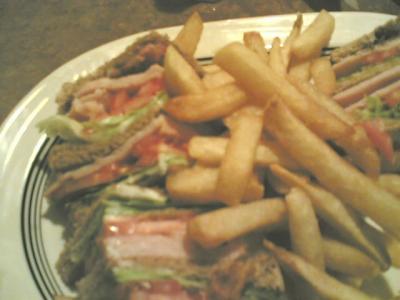 Then we went to spot and I computed while (e:lilho) played on the site via her cell phone. Her and (e:mike) have twin cell phones but seeing as (e:mike)'s mom doesn't pay for his cell phone service, he doesn't have the internet. 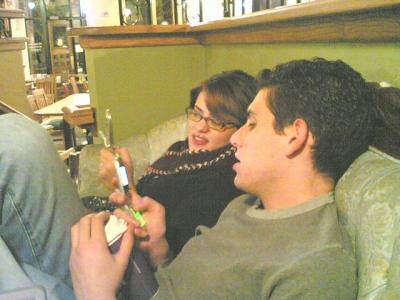 First we tried to find emily at the Bus Station. We never found her. We left a message for her so that she could find us. She didn't find the note.

We went out to quote for the (e:ladycroft)'s friend's friend $1 drink night. It was nice to meet (e:sbruger). To bad (e:southernyankee) wasn't there. Now we are off to Allen St. Hardware. 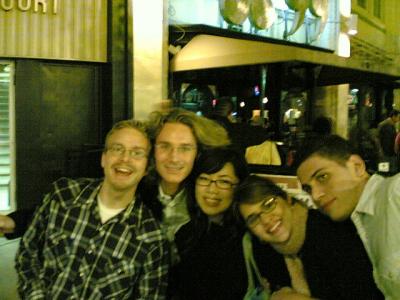 After quote we went to Allen Street Hardware. (e:jesse) bought us lots of wine and then we bought sandiwches. Their grilled chesse sandwiches are good. 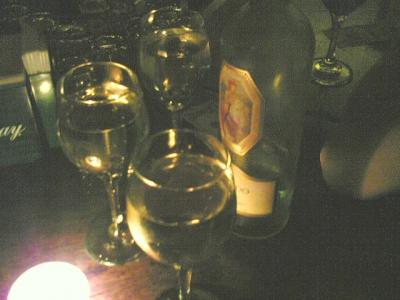 Afterwards, (e:matthew) went home because he hates dancing and we were going to go to the warehaus. 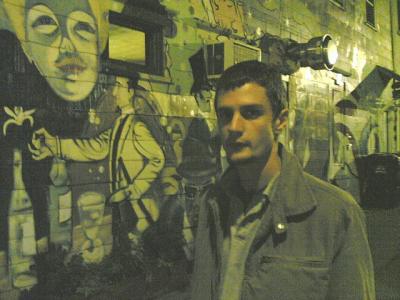 It wasn't open to the public. It was totally empty and they closed down. 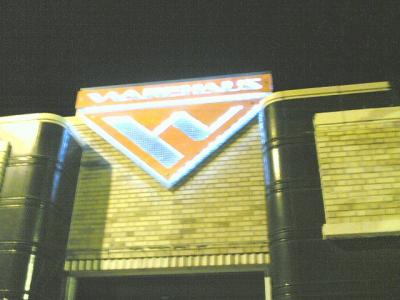 Last night we went to Groove. I think that it was called groove because of the big sign on the side. (e:ladycroft) called it opium lounge
[inlink]ladycroft,80[/inlink] in her journal. 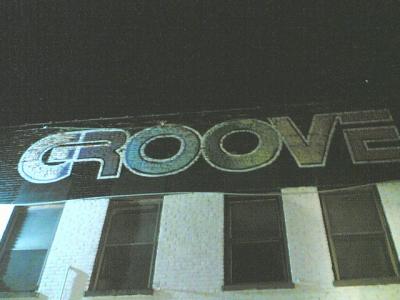 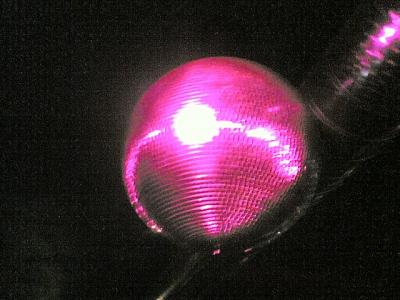 (e:jesse) got really annoying and started running away to different places downtown. We spent the whole night looking for him - turned out he ran out to Founding Father's. No more (e:jesse) when going out drinking. Maybe this is some sort of nordic defense mechanism as (e:terry) used to do it all the time.

When we finally got home (e:emilyjane) was there and (e:matthew) had found her. We all got in a giant fight with lots of screaming and doorslamming. I fell bad for emily, she probably thinks we are insane. Hope she has fun in New Mexico. Multiple attempts at taking the car away from the house which I was totally not cool with. Eventually, we all made up and went fish shopping.

I'm glad you all made up. Too bad I missed all the drama. Ok actually its a good thing I missed it probably.

Wow, the site bandwidth doubled this month. I hope we can move the server soon.

(e:lilho) has a crush on the guy at spot that everyone says looks like me. If you looked at my userpic and him you might not see it, but with the beard we look alike. Here she is asking for him to contact her.

I should start an audio shoutout thing for the city where people can send shoutouts from their phone to the web. Why can't I have a job doing fun stuff like that, estrip, the matchmaker site, and the memory network.

Haha! That's awesome! I hope that works for you lilho!!

I remember collecting chestnuts with nonna as a kid. She called them castanian? We would collect baskets full. (e:lilho) and (e:terry) stepped on them with bare feet. They yelled and it made their feet numb.

It's so windy out that trees are falling. 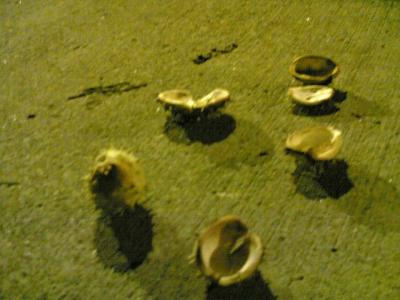 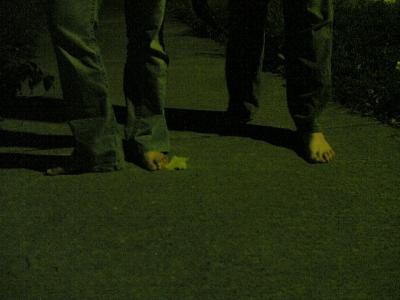 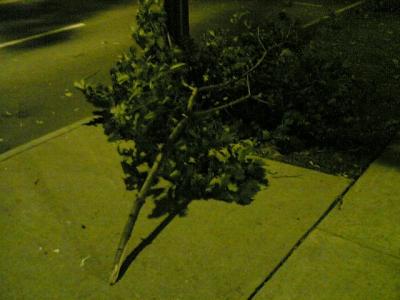