Chicago must be cold

Because (e:flacidness) wore shorts to go out dancing last night. 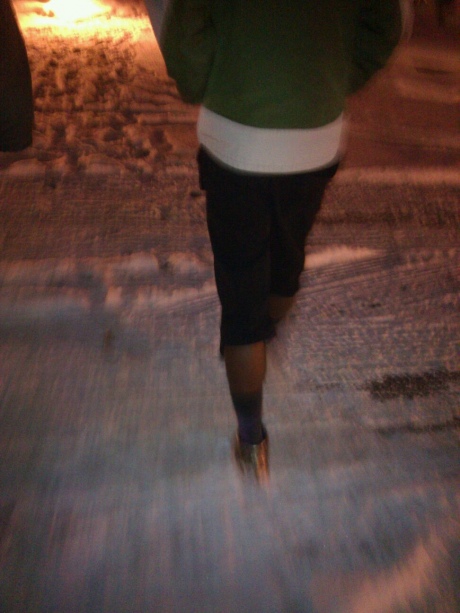 Heard Chicago is frigid but never been so...... Gold Converse interesting!

They were gold converse hightops. Its just the blur that makes them look like heels.

Wait are those gold heels?

It didn't really feel that bad and I was going inside.I'm aware that it's crazy but the white boys mightbe on to something.....i miss you HO!!!!!

i always miss tk, people need to visit here instead of blo.... much better and warmer here.

my new salmon board from neo

(E:matthew) also got my this awesome silver and wood salmon service from Neo on elmwood. That store has a lot of cool atuff if you are looking for gifts and aren't aure what to get.

I love the look of Silver and wood together. It makes want those fancy eye glasses I didn't buy last year. 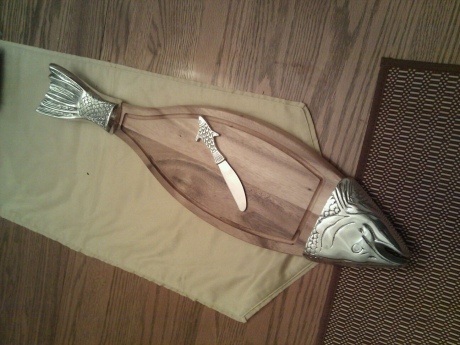 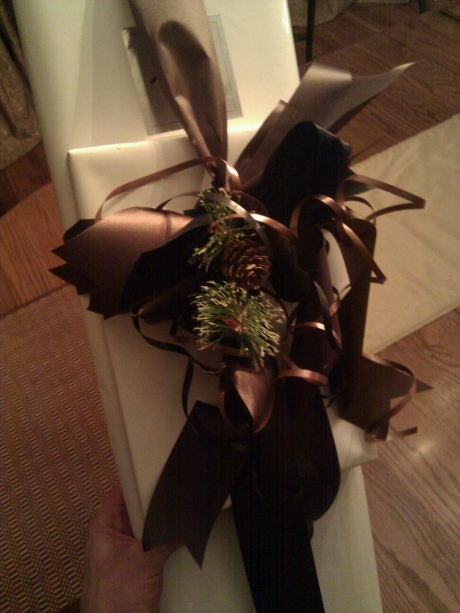 The wrapping is so cute. The lighting sucks so its hard to tell but there is a little furry buffalo in it. 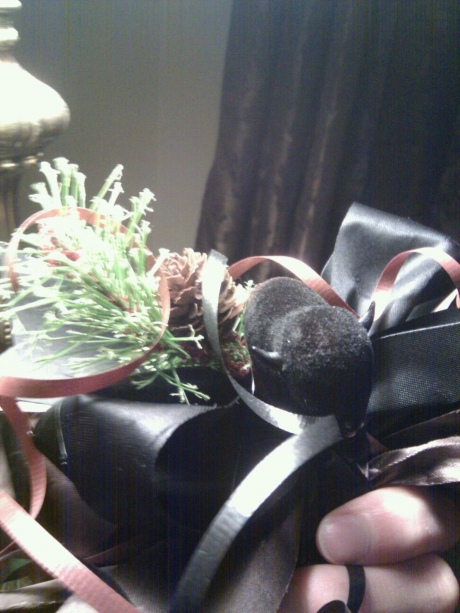 That cutting board is beautiful - something so graceful about the combination of engraved silver and wood.

The gift of good seafood is the best present ever. I really need to go check that store out.

As part of my birthday surprises (e:matthew) and (e:terry) headed back down to Exclusively Alaskan Good in Eden (e:paul,53138). Its so amazing to have such a great source of fresh Alaskan sea food close to home.

Its hard to believe but I think we got thicker crab legs than last time (e:paul,53149) and you know they say its the girth, not the length that matters anyways with king crab. 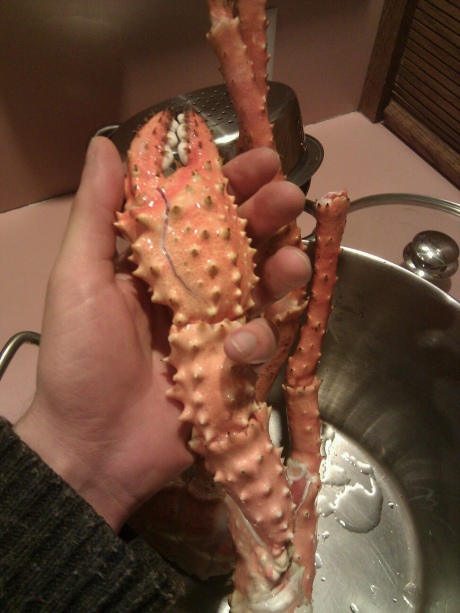 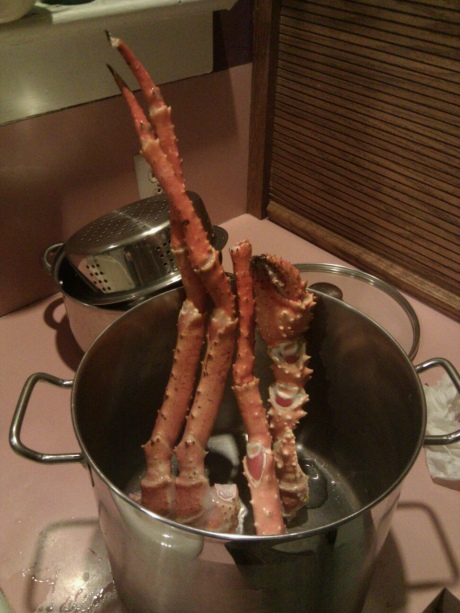 Here they are cooked 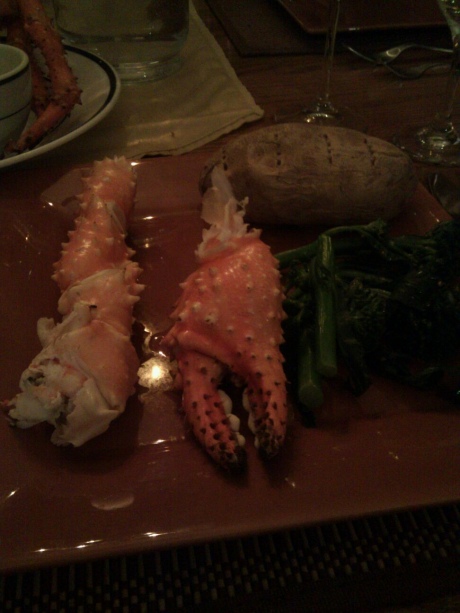 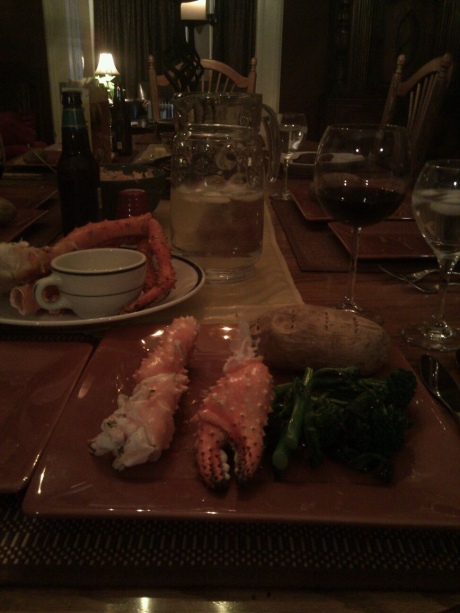 They also got some delicious looking salmon, halibut cheeks and elk steaks. I will take a picture of those when I cook them. 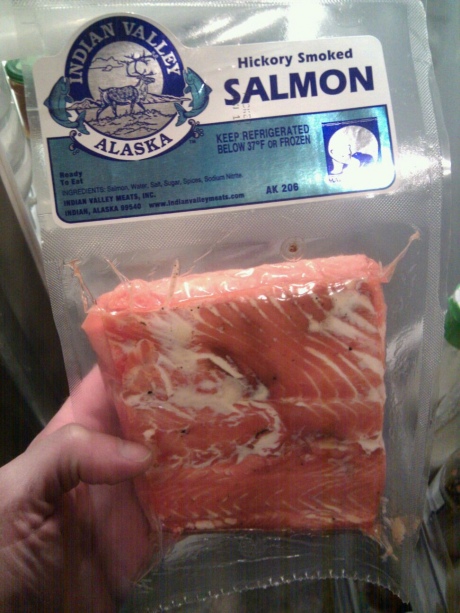 How does this Seafood place down in Eden get better quality merchandise? I may have to check them out myself.

These outsize seafood posts of yours sometimes end up in my nightmares in the oddest ways.

Uh I'm a bad friend but happy bday... We can celebrate with caviar and champagne in two weeks!

First of all my nook color is going to bankrupt me. The ability to have every computer book on one convenient, internet accessible package is overwhelming. Especially when they use such sneaky tactics as sending me an email saying, "Its snowy out, wouldn't you like to get a new book for your nook without having to leave the house."

Anyways, the point of this is that I got an objective C book so that I couldn't finally spend some time on it and it does in fact suck. For me, its simply too verbose and the NS (NextStep), camel case bullshit kills it.

That plus Xcode is so freakin awful. I thought an apple designed IDE would be refreshingly better. Turns out not to be the case. It makes me miss eclipse. Apple seems to be losing it to me anyways. Just look at the non standard interface for the new app store and the new itunes. I think the only reason they are generally successful with design is they cut out features until there are very few things to add to the design. Of course its easy to have a clean interface on something that only has a few options. I guess Xcode is an example of what they do with a larger, complicated application..

Xcode gets to the point where you have ~10 windows all open and even have to drag between them to accomplish stuff. And yes, I can remember all the keyboard shortcuts to bring the different parts I want to the front but its still a cluttered mess.

Enough with Xcode, this was supposed to be about objective C. 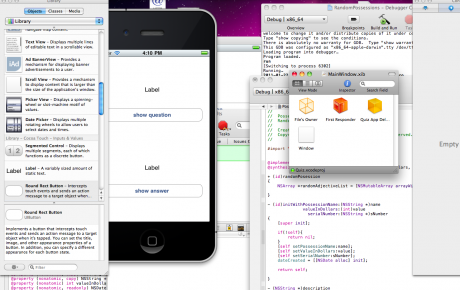 Well here is an example of my point about objective C. Several language comparisons of making arrays.

Thats not fair. Those are string in my example and you are using integers. They all would be small with integers.

Yikes, it cut my R code out.

And in R
a

Yeah, the superset-of-C syntax craziness is pretty unbearable, and they haven't even allowed garbage collection to be turned on in iOS apps.

I did not speed this up but when I copied it to youtube it was on superspeed. You can't tell me sulcata tortoises are not hunters. We never feed him any meat as he is supposed to be vegetarian but he seems to think otherwise. His usual diet consists of lots of hay and dandelions.

Yet he killed and ate one of our parakeets when it escaped and once I found him with a squirrel paw in the backyard. Then one day matt had the hamster in the tortoise pen and he chased it all over. He enjoyed chasing it so much I decided to make him a fake one out of fun fur to protect the hamster.

I pretty much spent my entire birthday sitting in his warm room and chatting with my friend yvonne on facebook.

Sorry to Assume that isn't a common name I have only known two in my lifetime.... The thing that is both good and scary about facebook is how everything it linked to it... For example this new computer at my mothers has windows what ever is the newest and with windows live you can down load pictures then sign in and upload them to facebook I guess there is a way to set it up (Not sure how) where it like remembers you are signed in. So yes you can put up pictures of say the bandits game or what ever but (yes they would get pulled down at some time) but you could also put up pictures of some chick blowing you or a you and a buddy getting high and one could argue one could ruin their life in under 20 minutes.... Or some else and it links to so many sites. Not sure how it links with yahoo but it does some how... The Face recognition software for pictures is amazing but again kinda scary and creepy at the same time.........

In Terms of Basra maybe someone should put a warning sign on his door.... Don't want anyone passing out in there and waking up missing a foot, HA.....

It wasn't (e:imk2). It was someone I knew from when I lived in Germany. She isn't only Facebook friend and I don't write anything there. I originally signed up so I could get a developer account. Then I lost interest.

As for Basra, I bet he would eat me if I passed out in his room.

1. Yvonne is Awesome
2. Don't forget to feed him or you may become his Dinner some day
3. A very Late Happy Birthday
4. YOU USED FACEBOOK!!!!!!!! Is the world coming to and End, Kidding

There are worse ways to spend a birthday - like taking an 8 hour final exam. :-) 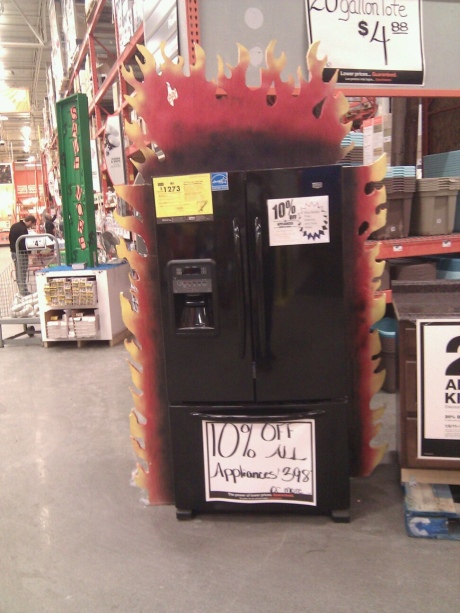 I so want that is one bad ass looking fridge

does it come with the attached fire cut out???

Would it have killed them to make the broken hard drive slightly more accessible? 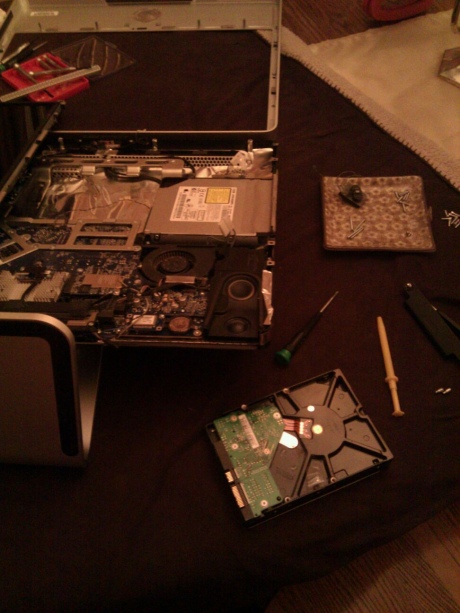 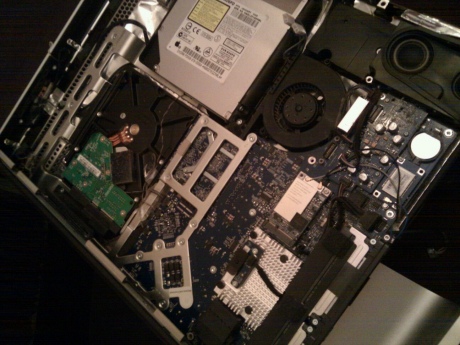 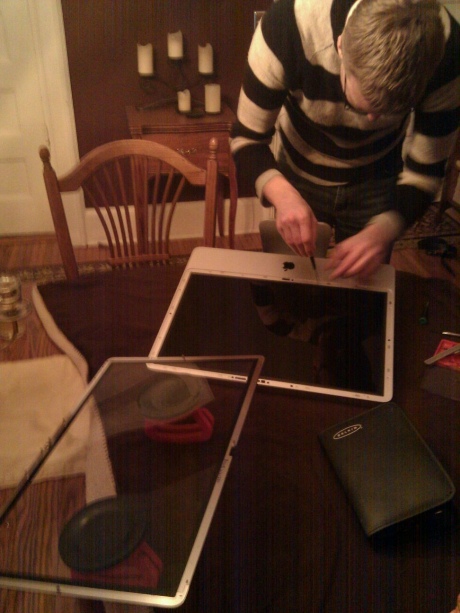 So we bought a new car, fixed the imac by replacing the hard drive, got a replacement part for the furnace and today the oven and television repair guys are coming. What is next?

-- Well, the oven repair guy just came. Of course, when he got here the oven is no longer locking itself and and making the F43 locked door shriek. He is ordering us a new controller and lock that should come in 10 days.

The television guy is yet to come. Eventually, this will all be done. I can't wait, then again I seriously worked till like 4am. Luckily, I enjoyed what I was doing to some degree.

This morning National Grid called because the tenants downstairs at Nonna's never transferred the electricity over to their name and they want me to let them in to shut down the power today - friday.

How can the tenants be so dumb to let this happen. They will have no heat. Tony told me they have known about this for months. He also said National Grid threatened to turn it off at the pole which I can't understand. Wouldn't that shut off electricity to the whole house?

Tonight at midnight is my birthday and I still have no plans/ideas. There was honestly nothing I wanted or wanted to do. I hope 34 doesn't suck.

Happy birthday!!! Hmmm... 34 was an intensely crazy life-altering year for me. I hope yours is much more tranquil.

The TV guy fixed the TV and for free. All that leaves is the oven.

it totally sucks that things always seem to break at the same time. it doesn't rain, it pours. the positive side to that is once it is all done, it is back to sunny skies.

good luck with it all, Paul.

And, an early Happy Birthday!! :O)

It was totally worth the trip back and forth to Lockport. First of all because the furnace is now fixed but secondly because I tot to order 24 smoked chicken wings from One-eyed Jack's on the way home. Even (e:terry) liked em and he does not even eat wings. 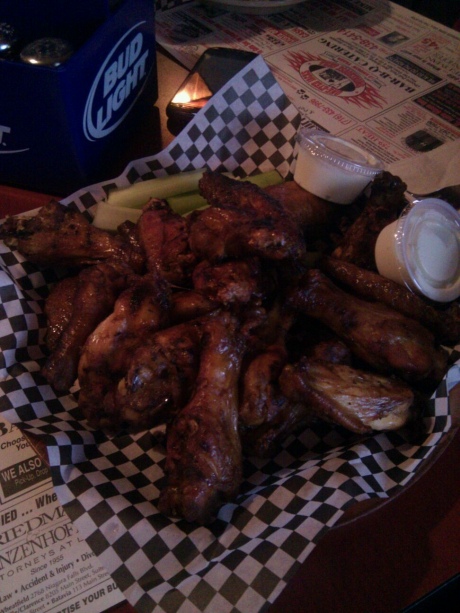 Figures. He lost his other eye slaving over these wings.

This thing seems like it has a lot of potenital for $99. I would totally replace paper with something like this - especially if it lives up to its 180 hour battery life.

NoteSlate is low cost tablet device with true one colour display, real paper look design, long life battery (180h !), together with very handy usage and very simple and helpful interface for pen and paper. This easy, compact and portable gadget is used anywhere you want to make any notes, drafts, sketches, any ideas for future reference. Paper for everyone! Write a note and check it later, save it, or delete it. Maybe send it after. Just one colour is enough to express the basics. Keep your life simple. You will love it. For $99. 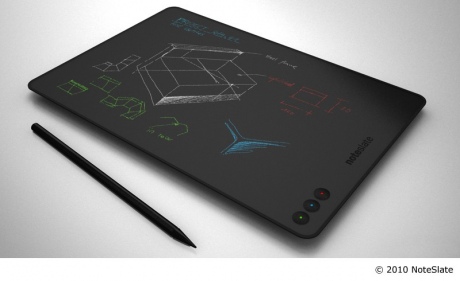 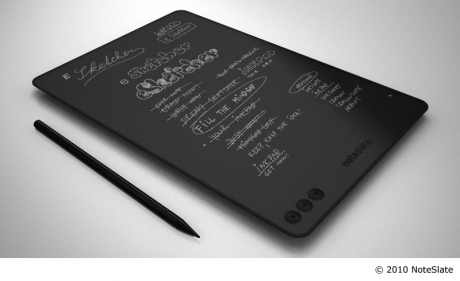 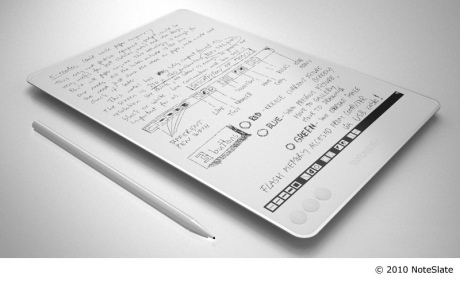 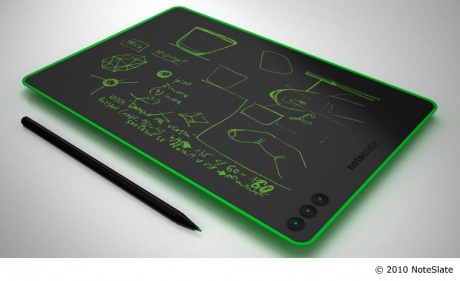 Its not It's. I really need to watch that particular typo... it's creeping into my emails and I really want it gone.

WOW. I love the concept. But then, I loved the whole Pixel Qi - LCD by night and e-ink by day concept too. These Ã¼ber-nifty gadgets have a way of getting stuck in pre-release mud... I am hoping this sees the light of mass-production.

I would have loved it even more had it a PDF display option. Most of my notes are PDF-related.

BTW, I have the hand-me-down Nexus One finally and LOVING IT. I can see why you like it so much! It's so sleek and awesome (well... when there is an open wifi spot). It's microusb transfer cord works on your Nokia as well. I think I will post those hilarious pics of you and (e:mike) this weekend. :)

They call it "low tech". If you could export to .pdf or some other format that could be read by other apps, I think it would be very useful. The concept is interesting.