The biggest crab legs ever

The real question is not how to cook them but how (e:matthew) and I are going to manage eating them. I have a feeling there might end up being some crab soup.

To give it some perspective, that is a twelve quart pot and 3 lbs of crab. 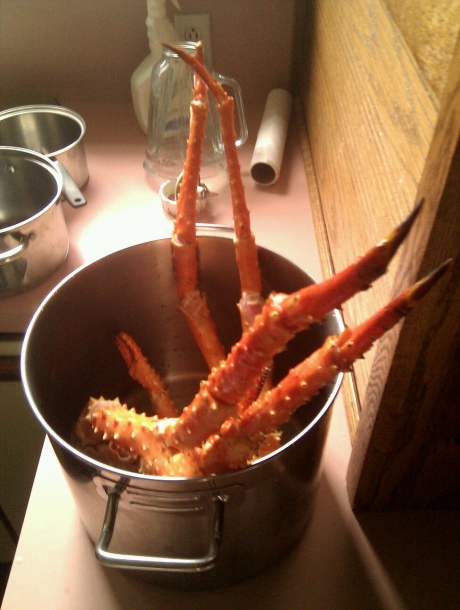 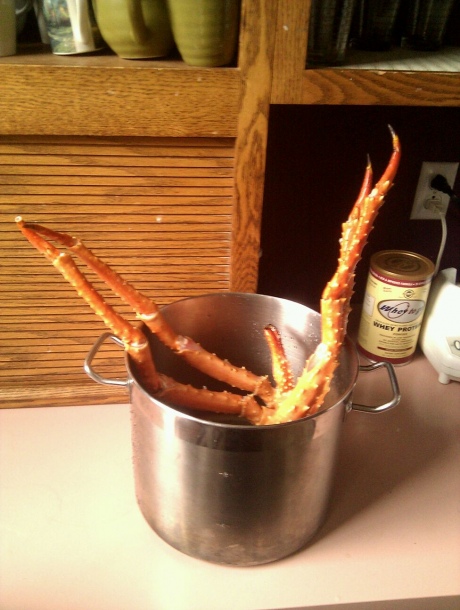 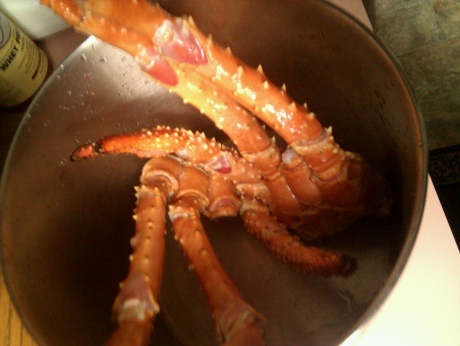 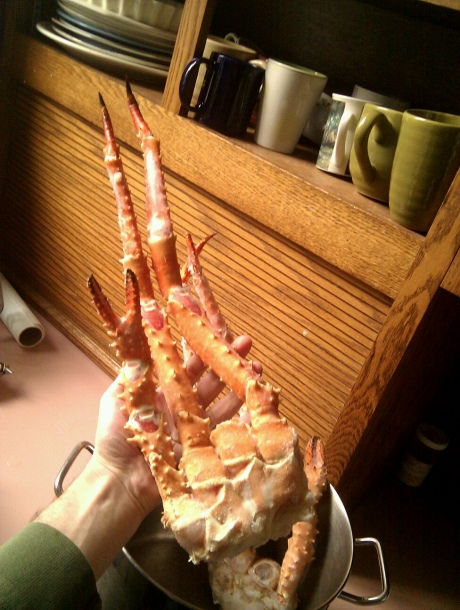 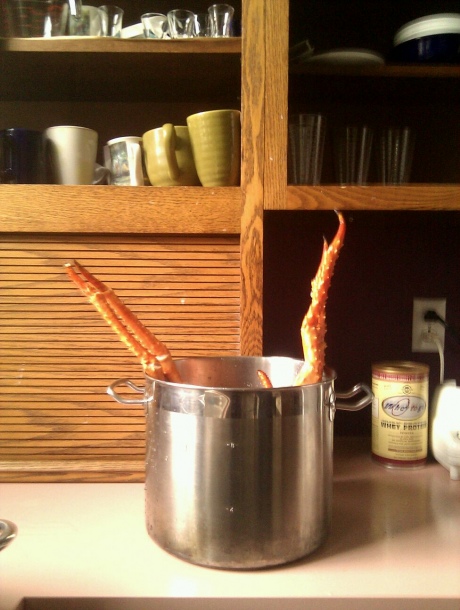 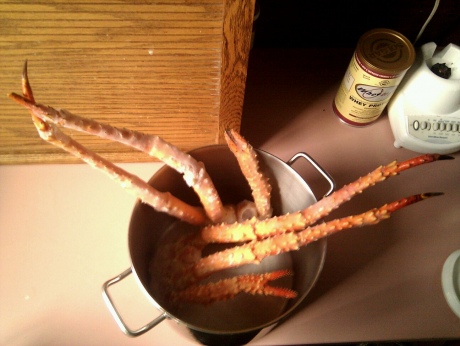 That was the thawing pot. I steamed hem afterwards and they came out perfect.

I usualy get King Crab legs for the holidays. What we usually do is thaw them out in the fridge for a day or so and eat them cold. Another way is to throw them in the microwave if you want them hot. The issue with cooking them in a pot is that you may overcook them and make them like rubber.

I wonder what they fed this crab... Crab growth hormones?

Ironically, by quitting the gym I now once again fit into all my clothes from my early twenty's. 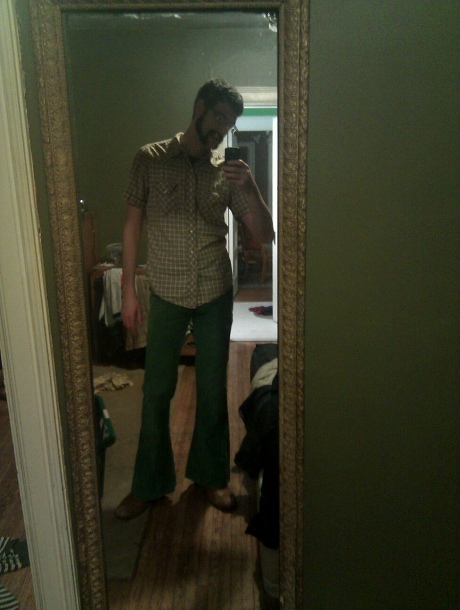 OOooh 70s bottle-green bell bottoms. Bring them back in fashion!! Go on!!!

This game is the cutest thing ever.

Its such a time waster! Those scared people just move from one room to another! They need to run out the house!

There is an Indian grocery store called Spice Bazaar next to Markheim pets. I need to go back with (e:tinypliny) or (e:samathon1986) because I didn't know what anything was. 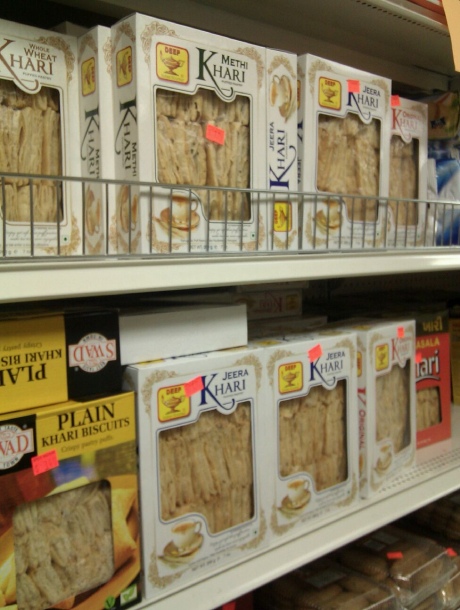 Ooooooh Oooh!! *Raises hands and jumps up and down!!* I love that shop better than Super Bazaar. Take me!! Take me!!!!!! I could tell you about EVERYTHING in detail!!

A couple months back someone wrote to me to suggest I try out exclusively Alaskan Good fishmonger in Eden, NY.

Sorry the outside picture is so dark but we got there after 5 in Novemeber in Buffalo ;) 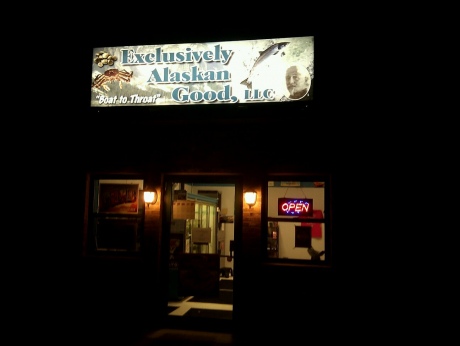 Inside there was a very friendly and knowledgeable woman working the counter. 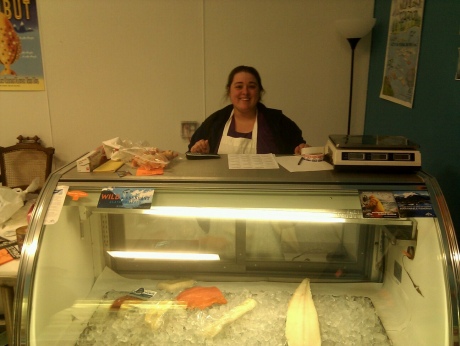 They had a bunch of fish and seafood products to choose from that were all exclusively from alaska. According to the clerk, her father was a seafood inspector in Alaska. When he retired they decided to open up a seafood store in his home town of Eden, NY. She had a great point about how the Alaskan seafood is safer than foreign import because we have much stricter regulations. 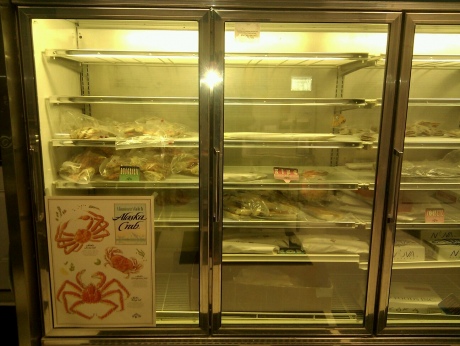 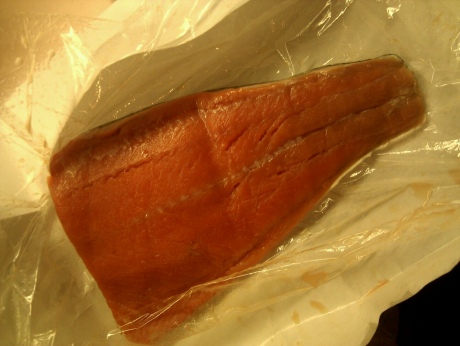 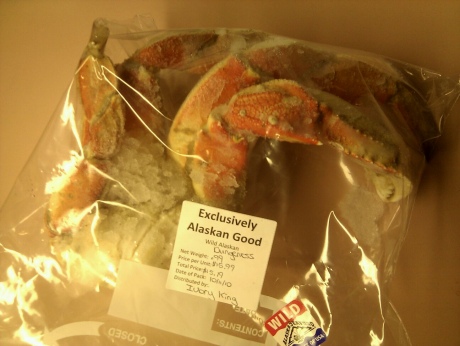 And the largest King crab legs I have ever seen. I makes the crabs seem so scary that the legs are this big. 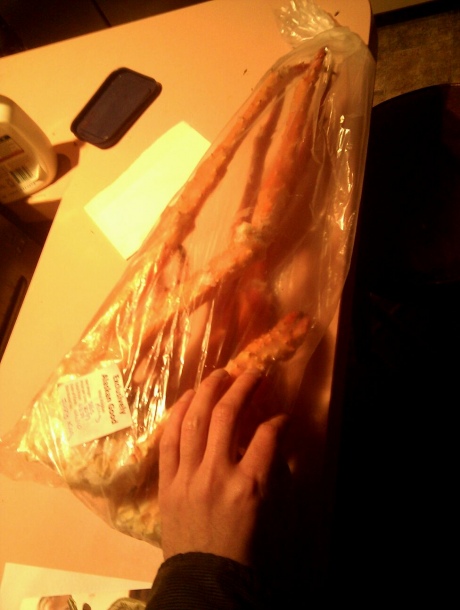 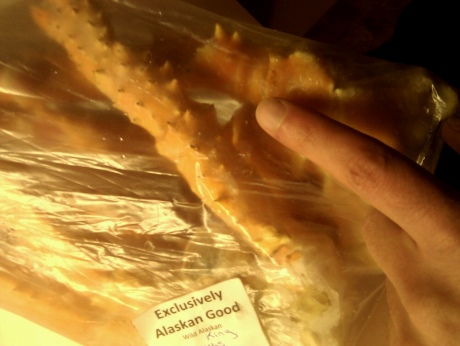 I also got some bacon wrapped elk. When we lived in Germany I used to eat Hirsh a lot which was deer I believe. I imagine elk is similar. It was good with current sauce. Seeing as I don't have very many currents, I am thinking it might be good with cranberry sauce as an alternative. 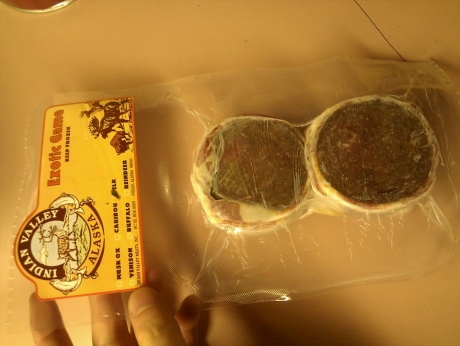 Their slogan is from boat to throat. 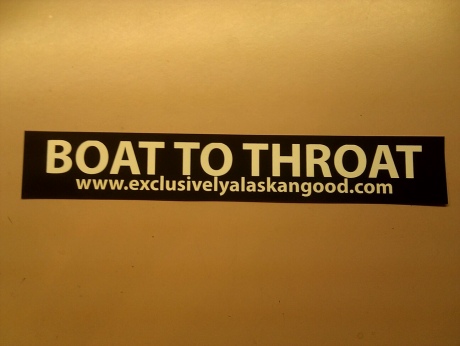 I made the sockeye salmon and dungeness crab for dinner tonight. I combined it with blueberries, salad and squash, yum. 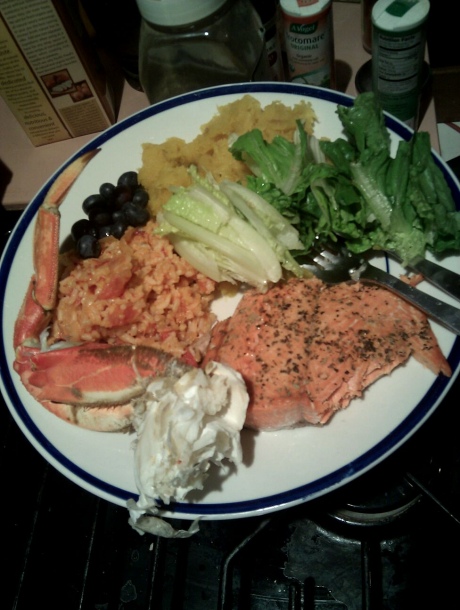 I would definitely suggest visiting if you are into seafood. The were open till 7 tonight (friday) so I imagine that is a normal weekend closing time.

and whatever mike said, makes no sense to me. i just wanted to give a shout out, hey (e:mikey)!!!!!!

butter???? your meals always have some sort of berry included, a regular antioxidant feast. good for you.

I lot of it is frozen but she said they are going to start getting more fresh things in. Either way if was definately fresher than a lot of the frozen things I buy at the supermarket and it was from Alaska vs China/Russia.

Boat to throat?! That seems like a mafia threat.

its unfortunate you decided to use an out of network provider which will lead to a 27% decrease in reimbursement along with a 15% intergovernmental surcharge and a flat 9.95 deduction for using a town beginning with E. You prolly should have read the fine print on your gift (haha this will only make sense to Paul prolly)

Talking to my phone

One of the main features that drew me to the Nexus 1/android was the ability to dictate input into my phone. It does such an amazing job. Today while driving it was able to handle "Text Keith Tower, Do you guys have extended drivers licenses" and it got it all on the first try.

I also searched for directions to a woman's house where we were buying some lamps and to a fish store in eden. All via voice. Then the phone gave me directions the entire time via voice back so that I did not need to look at the screen to navigate and almost die like I always used to with my iphone. The 3d style GPS navigation with voice on stock android rocks.

hehe (my brother's new team is thrilled you like all of it. :-)

I spent it at zoar valley with (e:terry) and (e:matthew). I really hope they don't frack it all up for next year. 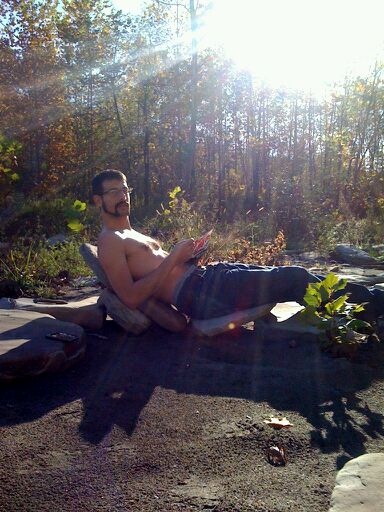 That looks amazing. I don't even want to think about wearing boots this year. Blah.

Someone made it before we came.

Did you make that rock lounger or was it a natural formation?!!

Maybe They Do Eat Birds?

Two tortoise stories:
1. This one is so sad:

2. We never ever let the tortoise have any protein because ever book and every vet says that it causes problem like pyramiding. While I am sure it is not the normal food for a sulcata, and we never feed it to him - he does have some natural hunter instinct. My old sulcata Sahara ate a crow, basra was caught with a squirrel foot, and then it ate our parakeet when it escaped (e:paul,49948) plus you saw how it freaks out for the hamster (e:paul,53079). A scientist did a study suggesting that pyamiding in sulcatas is actually not caused by protein consumption but by low humidity which fits basra for the winter. Apparently I need to up his humidity.

Regarding our emailings on this list, we've had several requests for reprinting in hard copy and also for forwarding to other lists. Both are fine and permitted as long as credit is given to our HerpNutrition list and Walkabout Farm. Our goal is simply the dissemination of knowledge in order to advance the science of herpetoculture, so it's great to see the information out there in other venues.

Those of you with tortoises and turtles are perhaps familiar with the problem of pyramidal growth in the carapaces of young captive tortoises. Many factors have been incriminated --- dietary protein, calcium, vitamin D, Ca:P ratios, low UVB, rapid growth from high calorie diets --- but to date our information has been strictly observational and anecdotal. One paper published 15 years ago suggested environmental humidity may play a role in pyramidal growth (Weser, 1988, Zur Hockerbildung bei Schildkroten. Sauria 10:23-25). No controlled trials have been done, until now.

A paper has just been published by nutritionists at the University of Veterinary Medicine in Vienna (Austria). Fifty hatchling Geochelone sulcata (siblings and half-siblings from the same farm) were placed in one of five groups that differed in dietary protein and environmental humidity. Protein levels were 14, 19 and 30% crude protein on a dry matter (DM) basis; the diet form was soaked pellets mixed with endive. Extra calcium was provided each group. Humidity groups were arid (24-58%), medium (31-75%) and high (45-99%). Lighting was by three different lights, including UVB-emitting Reptisun 5.0 by ZooMed.
Pyramid humps were quantified by means of measuring the depth and side-lengths of the second and third, and third and fourth central plates on the carapace. Ratios were calculated and termed the H-value (H=hump). Statistical tests included appropriate non-parametric Kruskal-Wallis test and Mann-Whitney U-test.

The researchers found that growth rates differed significantly with dietary protein level. Hematocrit and serum levels of calcium and phosphorus did not differ between groups. They found that dietary protein had little effect on pyramidal growth.

The authors suggest that under natural conditions, the faster growing hatchlings would be in the humid areas under growing grasses. In contrast, those naturally in dry areas would have no growing grass because of food scarcity, hence have lower food intakes. During food scarcity, there is little growth and probably little bone growth.

Thus, the combination of arid conditions and abundant food is abnormal for young tortoises, yet is commonly found in captivity. However, correction of the problem is not through food (calories, protein) restriction, which can secondarily lead to immune suppression, stunting, debilitation from multiple nutrient deficiencies, and shortened lifespan, but through increasing humidity. When humidity was high, then high food intake, and high dietary protein, did not lead to pyramidal growth.

The authors hypothesize that during dry conditions, dehydration reduces both intra- and inter-cellular pressures on soft cartilage at the areas of bone growth, which could lead to collapse of the soft tissue and subsequent ossification in the collapsed position.

The authors conclude the paper by recommending hide areas of 100% humidity be available to tortoises at all times.

Maybe I missed this in all that information, but what are the ill-effects of "pyramiding"? Does it cause the tortoise discomfort?

I miss (e:terry) so much already. I am not sure how I am going to manage a full 12 days.

LOL @(e:matthew)'s comment. I see things are going to be tough this evening.

Well know that I said it it wouldn't work, but what if you walked up and tried to pick him up at a club as a surprise.........

That's what you get when you have a bf who'll only vacation alone.

I know it's complicated with allergies & stuff, but you just showed us all that you have a ridic amount of vacay stored up.... just sayin'... ;-)

I need to go on vacation. I am over the limit on hours. Its been years now since I have went. (e:terry) is going on a Vegas vacation tomorrow. I am pretty jealous.

You should go somewhere warm in the winter for about 2-3 weeks.

Haha, I would like to think it is time not working on work projects. Something I almost never have time for. I don't need a totally relaxing vacation, just time doing something other than work. The problem is I can never stop thinking about work projects even when I am not working on them. Maybe I just need to take up drinking.

IN fact, what is time?

What is a vacation?

We lose anything over 320 each april.

Ooh...you are lucky. It's use it or lose where I work. If you go into the New Year with more than the maximum amount than you accrue per year, than you lose everything over the maximum amount. You actually get pressured to use your vacation time.

I had to schedule a bunch of vacation days over the holidays in order to not lose it. What a shame ... lol. It's nice having to use vacation days.

That is a large amount of time, thank god for it rolling over