These shoes are so amazing. 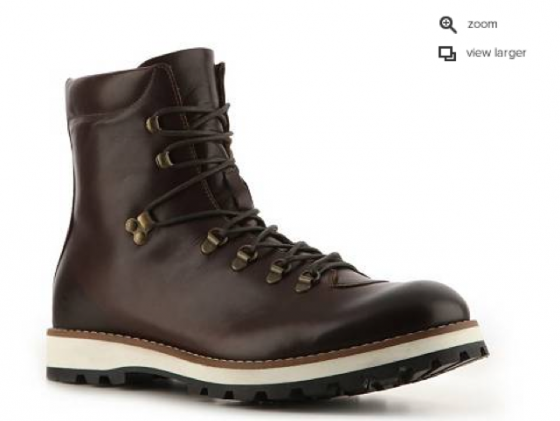 The soles are made of that amazing Italian Rubber that smells exactly like Cabbage Patch Kid faces. (e:mike) you know what I am talking about. 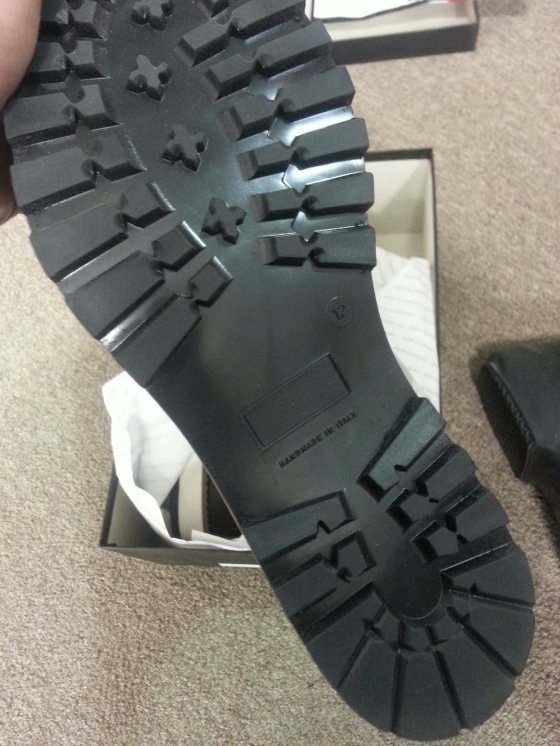 I never buy shoes online but I tried these on at the store and they were awesome. For some reason they are $169 at the store but $129 online

at the same company. 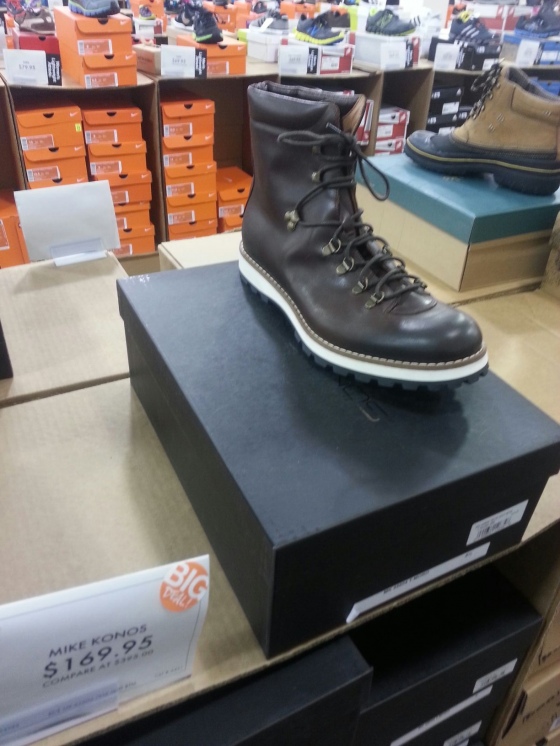 I asked at the store but they wouldn't match their own online price. That seems so stupid to me. It basic is relegating the brick and mortar store to a try on room.

I finally got my DSW account's merged and online access. For my trouble they gave me an extra 500 points which got me another $10 Cash Reward cert.

I went to go buy wedding shoes and they had one last pair in my size today at 70% off, plus O had a coupon bringing the originally $350 pair of shoes down to $40!!!

One should never buy boots or shoes on line unless like here you tried them on... Problem is each companies sizes run different Nike's are thinner then Standard think and thing like DC or skateboard type is a little wider so you can order shoes and they won't fit....

Another thing I wanted to make is already made. I figured the price point is cheaper than I would have made it for with all the fuckups and melted circuit boards that would have occurred along the way. Although less fun.

Its also arduino compatible and has an API. I can't wait. 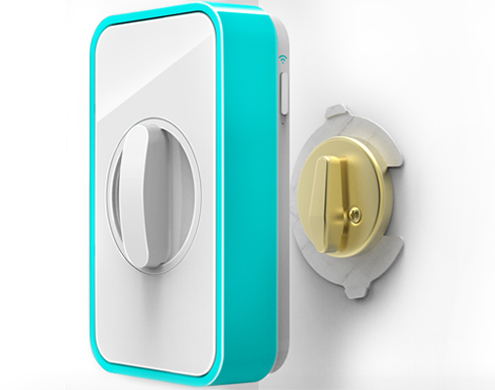 Amazing.... And perfect for you!

ya, can't wait till it gets here

When I said sheep in fishnet stockings, I was joking

Yesterday, I jokingly referred to sheep wearing fishnets and heels. Obviously I was joking as I don't see what that would be necessary with sheep already sexy as they are naturally. Anyways, like everything I think is original, its already been done. Apparently, its even already been mass produced and is available for $34.99

(hint, hint to anyone planning a bachelor party) 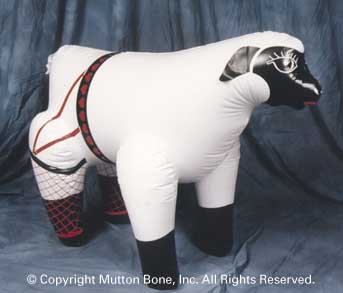 I made the trip down to Eden's Exclusively Alaskan in order to pick up crab legs for my mom's New Years dinner party. We had a $50 gift certificate to start with so it was a good start. Also got some scallops and salmon in a jar. The guy threw in, according to him, the world's only seafood pierogis. I am excited to try them. 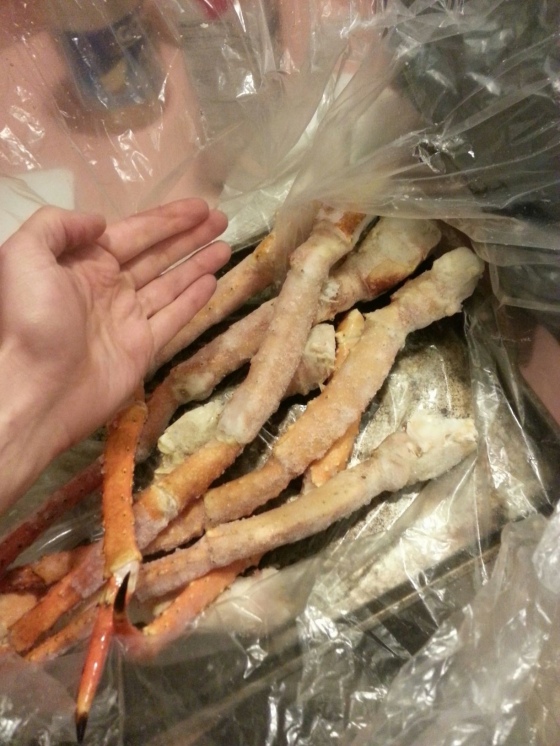 This is not food but next year I want to have a party and make a cheese snowman based on this and powdered with parmasean. 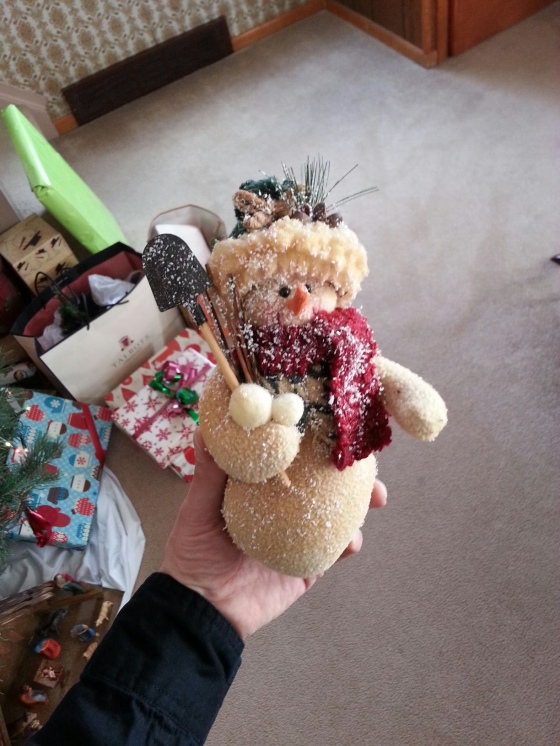 My whole life I made fun of my dad for wearing rubbers on his shoes. Then as ana adult I got my own fancy leather shoes and syarted walking to work through the salty slush. Suddenly, it all made sense so for christmas this year I asked for my own rubbers and got em from my dad. I have been wearing them ever since. 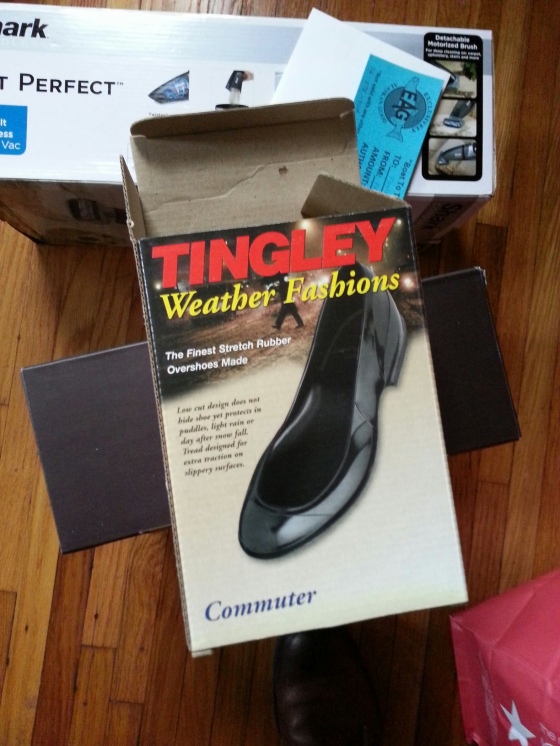 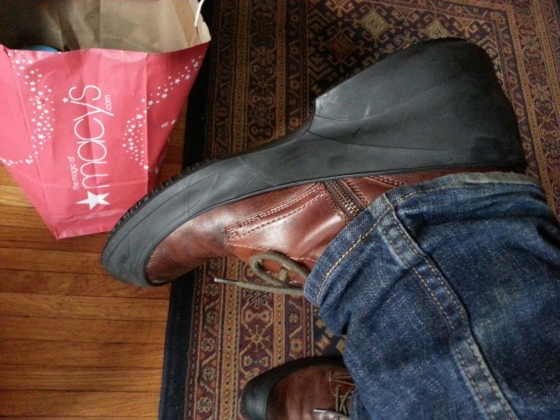 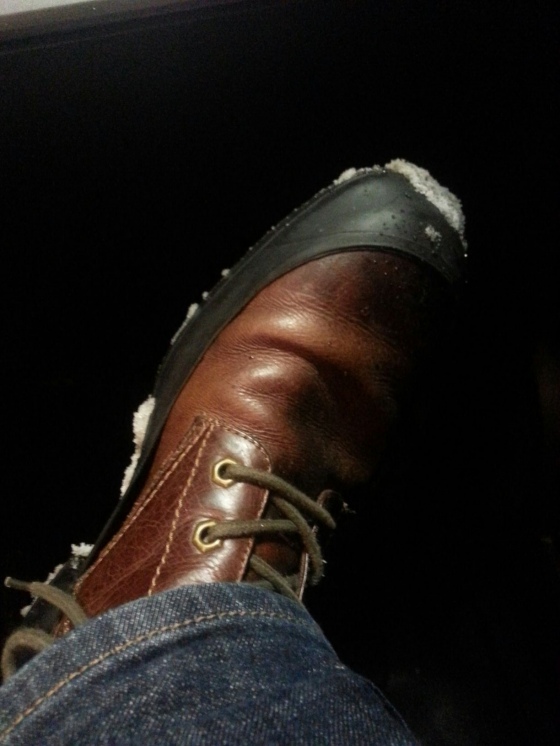 When I was 14 and working at McCrory's this old guy came and asked me for rubbers and I kept on pointing at the condoms, I had no idea he was looking for these.

I would so get those too... It's so nice being able to walk around with nice shoes here and not having to worry about them getting ruined. Especially so be I seem to love suede heels in various colors.

Only a few things were left in the fridge and I couldn't get the car oit so I decided to do some weird mix and matching. I came up with lima beans in pink grapefruit sauce. I wish the color was better in the picture. The light green on pink was really pretty. 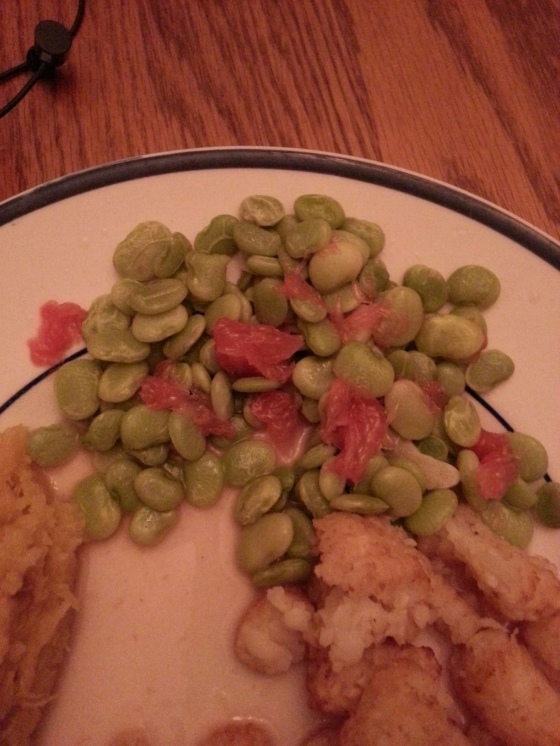 Uh that sounds no bueno.

but did it taste good??

Its so deep right now. I can't believe someone parked at the end of my driveway like there wasn't a driveway. We shoveled the snow onto their car like it wasn't there. 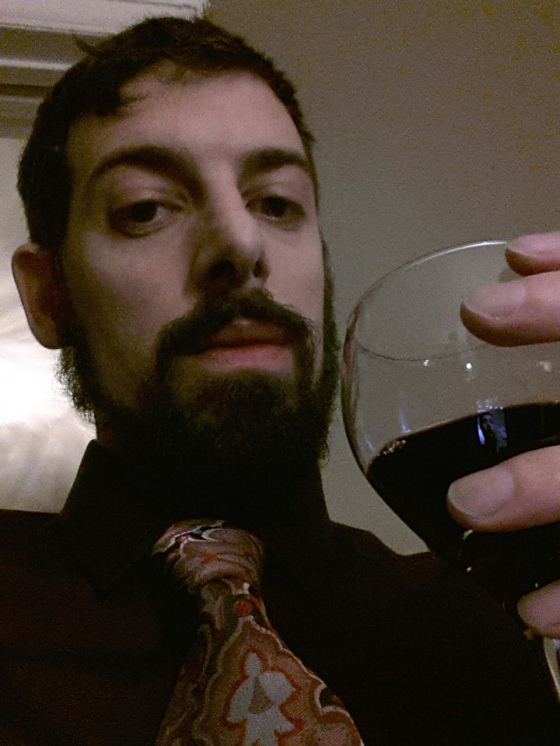 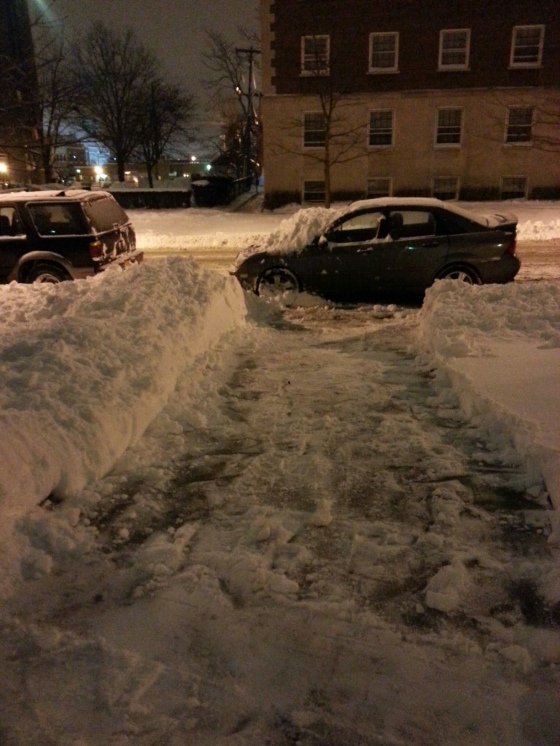 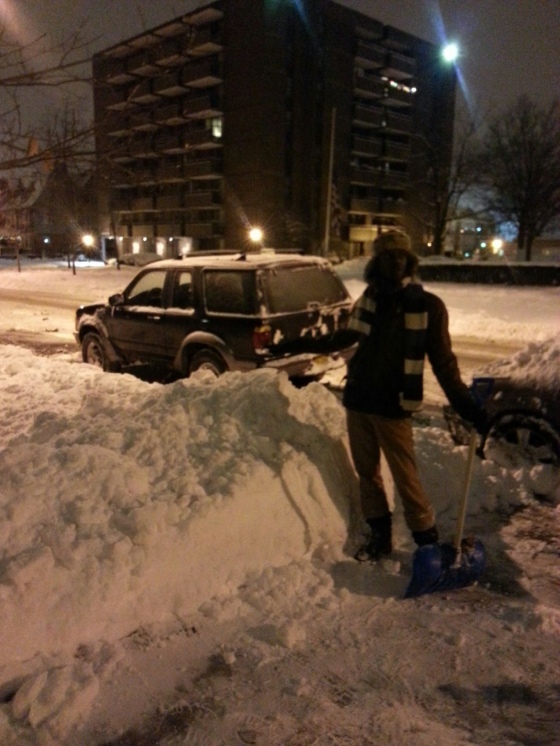 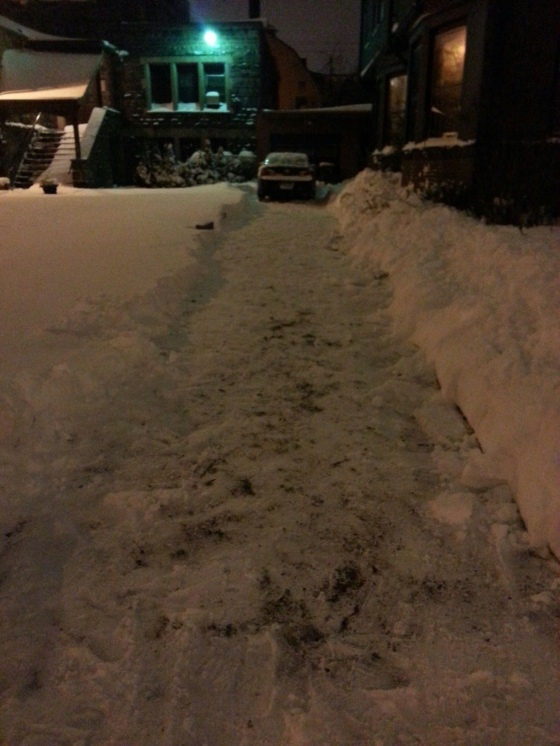 Now it is illegal to toss snow from the side walk or drive way into the street but I guess onto the car is legal ? Crazy how so many people don't shovel or only do like a walk way and not in front of the entire house... The snow is deep and I'm not in deep snow walking shape....... Wonder what the person thought when they came back and found snow on their car....

Oh yeah. I was the home owner with an illegally parked car at the end of my driveway when I got home after 14 hours of work. I just wanted to park in my driveway, silly old man that I am.

You can call the Buffalo PD and ask that the car get a ticket for illegal parking. It happened to me. Fortunately for the illegally parked car and myself, the cop and figured who the car belonged to and got it moved.
Under some circumstances, you could get the car towed (but I'm not really sure what those circumstances are).

Walking home through a foot of snow sucked. I was the first one shoveled on my block for once. I am not even bothering with the driveway as the car never goes anywhere. 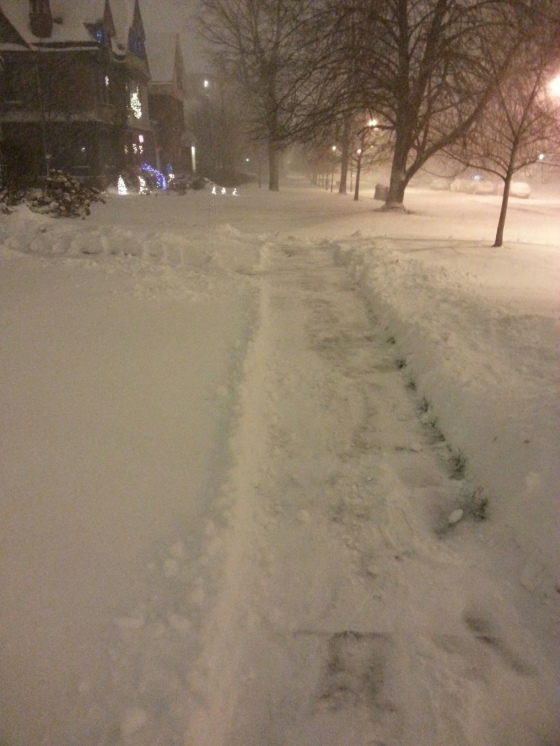 Seems crazy that you went to work and no one had shoveled on your block by when you came back... But if people use a side entrance it makes sense. But also shoveling is one of those things that if done the correct way the scraping wakes people up... It woke me up this morning then over to my mothers place... Now my place they did the walk between houses and in front of one of them not the others...ARGh ... Not to mention there is a corner house where they only did the front and not the side....ARGH...

My mom kept hinting she wanted something touchscreen for a while now so (e:mike) and I got my parents a tablet for christmas. We got them the Asus transformer tablet 300t. Its 32gb, quad core with tegra 3 graphics running Jelly Bean 4.1.2. The hdmi out works great with the tv so they can rent movies on google play and stream them right to the tv.

At first we had reservations if they would/could use it but by the time I left they were so into it that I witnessed my mom try and pull it out of my dads hands to play a game he was playing, haha.

On the way home mike and I both google talked them to say we were home and they responded via the tablet. They even gave me a google talk voice chat to say goodnight.

I got them on pandora, google talk, a bunch of games, google music, google play, google earth, skype, chrome and more.

It was fun ripping their old CDs on their comp and watching the songs seamlessly show up on their google music app on the tablet.

Then we played a cooperative game of word search.

Top of my gift list this year: two pairs of texting gloves (wool pair and leather driving gloves) and the simple design salad bowl I have wanted for months. Now I am goung to need the whole collection. 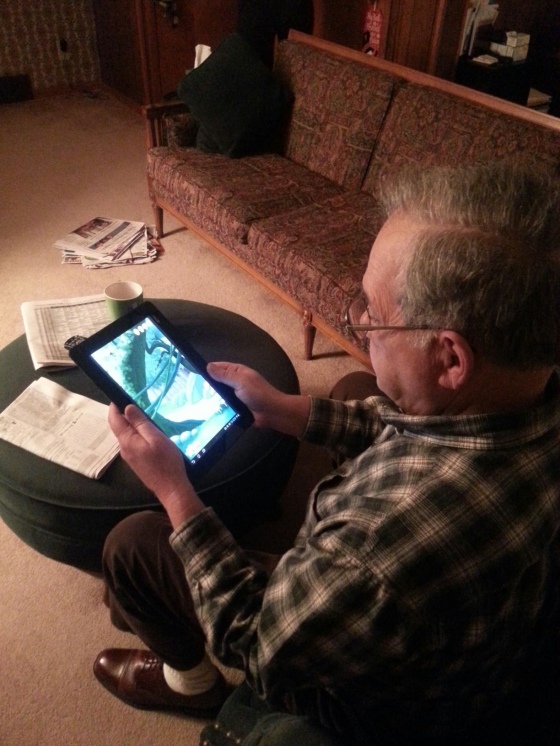 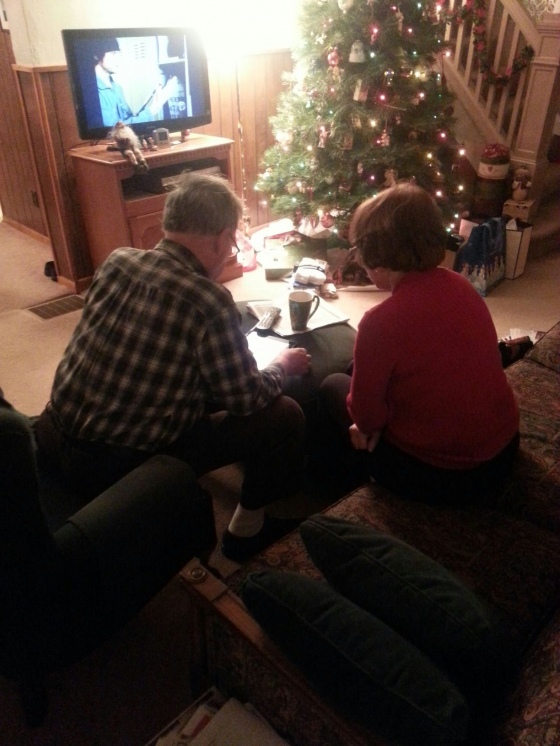