(e:hodown) sent me these awesome leather and suede converse. The ones with the zipper down the middle of the laces. I can't decide if I should put in the laces that came with them or not. If I use the laces it means I need to do the laces and the zipper to get than on and off. 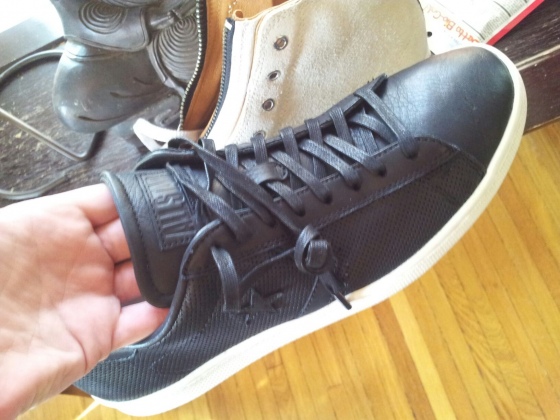 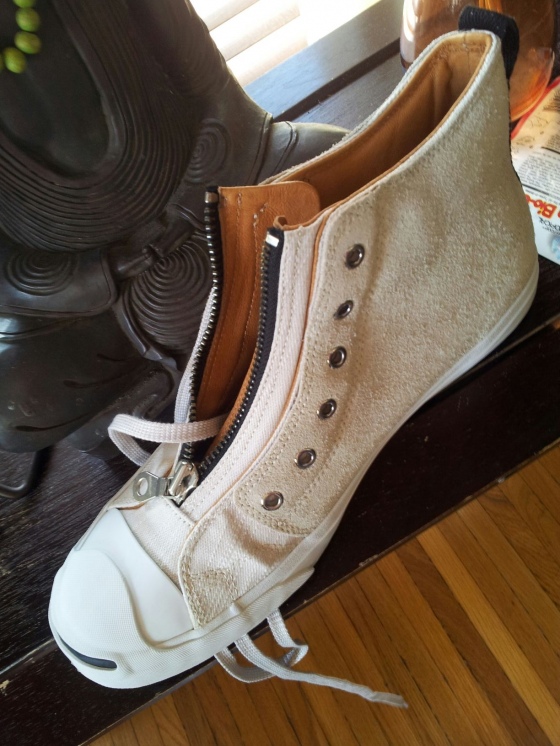 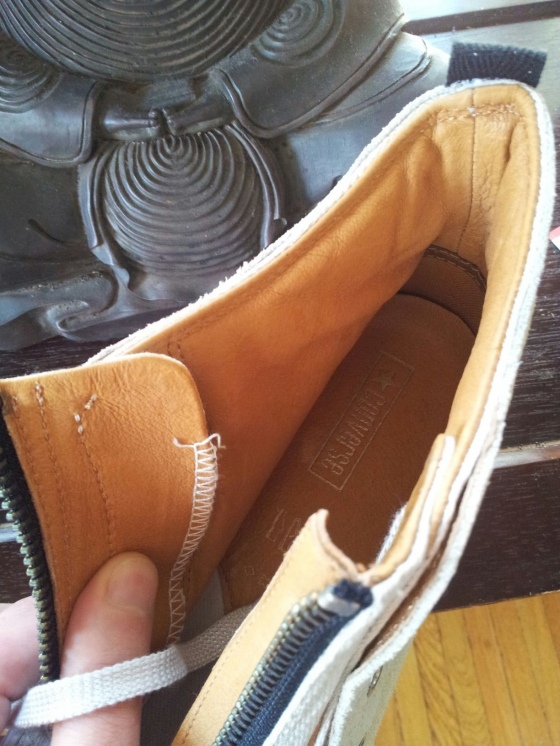 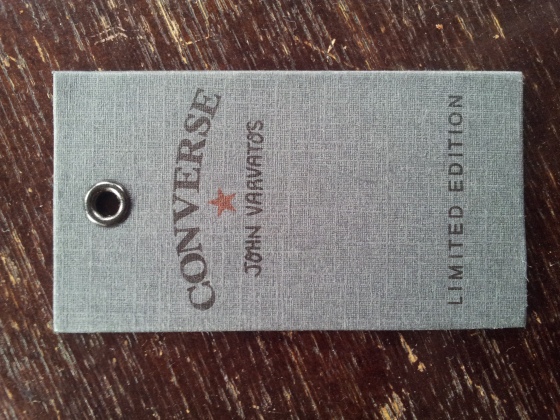 Truthfully, I saw the leather converse headline and thought it was a LeeTee post, Props to hodown, these got style

You're really starting to be kinda stylish and I like it....

Nice. I am obligated as an addict to be jealous...

Those do look cool..... Is it possible that they might be the right size so you can slide in zip them up but keep the laces in but not tied so that is the style thing?

Also what is up with the black converse in the 1st picture?

As (e:terry,56315) mentioned, I won the infotech Niagara Beta awards for Techie - Large Company. I was genuinely surprised and excited about the award. I didn't know what to say when they called me up in front of like 500+ people so very spur of the moment I said something like,

I would like to thank Roswell Park Cancer Institute for presenting me with an endless series of interesting puzzles to solve, my coworkers for making it fun to solve those puzzles and my awesome boss Del Reid for allowing me the freedom to solve the puzzles as I see fit. Here is to a world without cancer.

Then I held up the award. It was cheesy but I think it worked. All in all it was a good day. Even more exciting was going to a morning meeting I was dreading and having someone there refer to me as a wizard and say that I was able to significantly up their productivity with one of my creations. Its nice to hear some positive feedback.

Congrats again...... I know nothing about computers on the tech at all.... But I like what you said... I also from being someone who works like how it sounds like how your place is... To me it sounds like again could be wrong but just from what you said ... That people go can we do this or that and you figure it out...

You deserve it!!!! I think your speech sounds great... Where will you display the award? Perhaps you need a showcase?

For (e:strip), that wizard compliment would prolly sound more like: "I was able to significantly decrease their productivity with one of my creations."

Woohoo - mr.deadlier in our neck of the woods?! Come baaaaaaacck and post some more!!!

Congrats again. You deserved it!

á¹¼ery cool. :) Love that you won the recognition for all your blood.. sweat hmm. come to think of it, only blood.

Paper in the ipad vs Note app on galaxy note

You can see the tool and color options on the note are so superior. 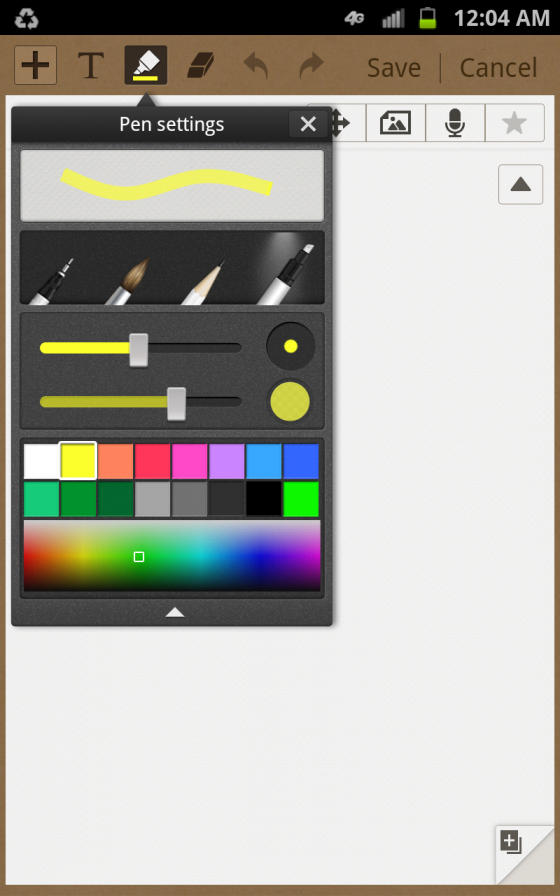 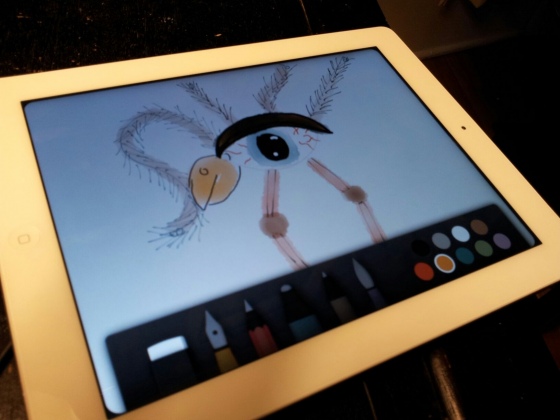 It came with the phone, I really wish you had this phone. I think you would love it.

I have a stylus now for the tablet, but it is nowhere near as precise for drawing as my wacom. What I need is wacom level precision and control on the tablet screen.

I bought the stupid tools for the paper app on the iPhone. I like the interface for switching between notes but I really enjoy the drawing app on the Galaxy Note so much better. One thing I really miss is the S stylus. I love how people pretend they don't want or need styli for the ipad but then there is this giant ipad stylus market.

The other things that are so much better on the Note are the much richer tool and color selection options. You know, the basics like being able to pick from more than 6 colors and having high tech fancies like variable pen size and transparency. I can't believe the paper ipad on the ipad suckered me into to purchasing the different pens for $1.99 each. I though I would use them to sketch stuff out for work but without a stylus, it's not so useful to sketch out idea. 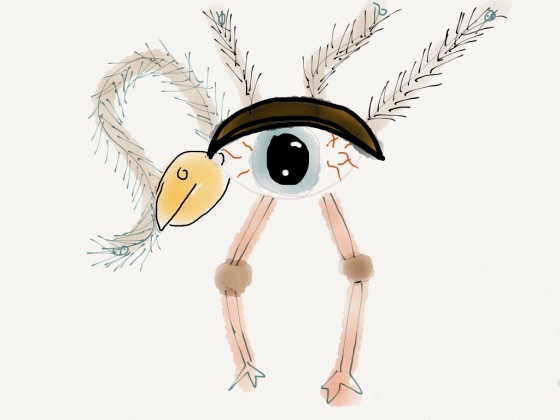 I still like my iPhone... It does what I need it to and its white.... I also dropped it in the bath and it still works.

What's with the popping conjunctival vessels and why is the beak attached where the nasolacrimal duct should be,,, man and that thing has inflammation of the knee joints, possibly some kind of rheumatoid arthritis.

LOL. that thing is a perfect definition of creepy-crawley-cutey!

Heh, So Android is better in many many ways as we already know. ;-)

seriously, I wonder how Apple gets away with such atrocious hypocritical snobbery. There is something to be said about their "sheep manipulation" skills.

You know what we need. The power of Apple persuasion for prevention efforts in public health. If some organization like Apple could persuade a ton of people about the "sexiness" of eating plant based diets, cutting down portion sizes, moderate regular exercise, cooking at home vs. eating out, consistent small balanced meals, we would all be so much ahead in terms of health just because the persuading message is so slick.

I ordered this interesting device that allows you to measure the amount of electricity in watts that a device is pulling at any particular point. The device itself is cheap and plugs in between the device and its power source. THis is not the exact device I own, but its the exact same thing

Here are some interesting facts:
We use so much electricity and our bill is around $180-200/month for 3 people. For example jan-feb of this year we used 1577 kWh and it cost us $188.36 with services and taxes, etc. Looking at the bill I think it is somewhere around $0.12 per kilowatt hour. Which is 1 hour worth of 1000 watts.

I think we could probably save so much money by unplugging things that are not being used. One way to save a lot of money is to plug everything into power strips and then just turn those off when you leave. This is especially useful for devices that draw power when not in use, which is most of them.

Well you could save energy but do you really want to? What I mean is when you want to watch something do you want to have to turn on the power strip? Of course anything with a clock it will mess up maybe not a computer clock but you get what I mean... I could be wrong about this but I think the biggest part of people's bills is cause they leave lights on...... Then the big ticket things like washers, dryers, freezers and that kind of thing.......

So I leaned how ebay works today. I haven't used it in a long time. I was looking at new servers and the price was $1300 with 1 hour to go.

There was a "make an offer" button. I put in $899 and hit the button. I was under the assumption it sent an email to the auctioneer and they could get back to me. Instead it sent an immediate accept response with the bill. If I had known it worked this way, so automated, I would have tried lower. Still it is a great deal.

I might have been able to built one from scratch for cheaper, like I did with the original super micro server, but it would not have been as sure to work as the Dell 1950 which I am already using.

Anyhow, this will allow to me to experiment with KVM and cents 6 virtualization.

This should also solve the running out of space for the site media. Not necessary but if anyone feels they want to contribute feel free to donate

Now if only I could afford SSDs for it


Earlier this year we bought four of the Intel SSDs to prototype them in a new Dell 1950 Poweredge Server in a RAID-0 configuration (striped data for pure performance). We have a multi-tiered slave database architecture so Iâ€™m not worried about RAID-level redundancy. The results were amazing! We tasked the Intel SSD prototype server as a database slave in our production environment to safely introduce the new technology into our operations. When we initiated synchronization from the master database server, the SSD server was about 90 minutes behind the master. Typically, when a slave is this far behind the master it would have taken a slave server about 30 minutes to re-sync. Well, with the usage of SSDs, it only took about 100 seconds to re-synchronize with the master database!

I admit I have never used ebay only searched it.... One of the reasons is the type of stuff I would buy I would want to see the condition also there are people on there who use it to make money... Doing so is kinda illegal but don't know the laws so not sure... You go on and win an auction get the the said Item try it on and then re-sell it at a higher price...... I can't say for sure I will donate but I'll see where I'm at money wise at check time........

Back in sole-IRC days, I always used to wonder who those big IRC servers were. And now I know someone who fits the profile exactly.

Grats on the find :o)

No Fear They Survived

The freezing didn't kill them after all. 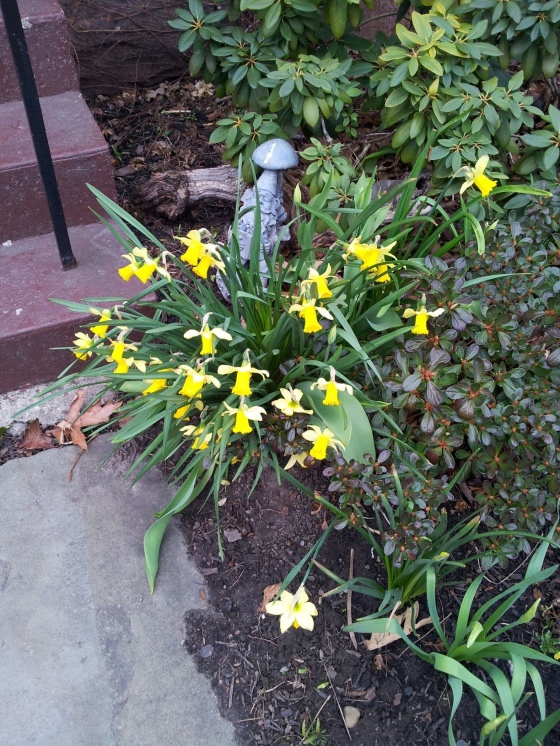 There go all the flowers. 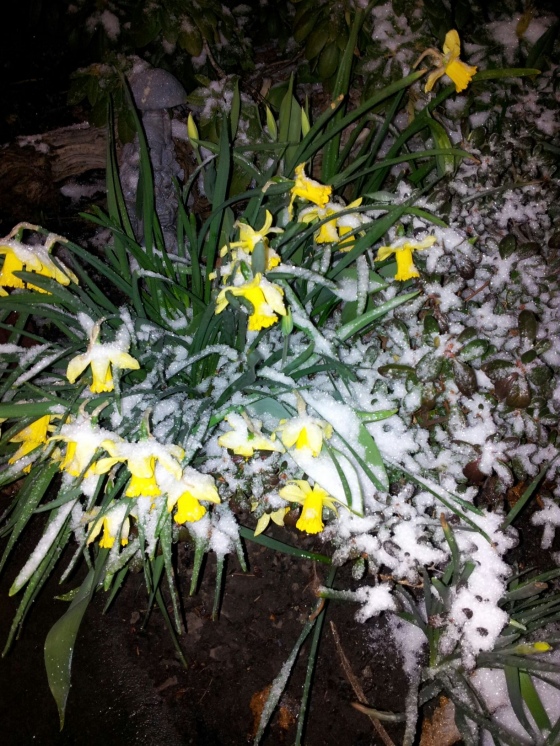 Early spring plants will be ok. and that is my story and I am sticking to it.

The are so high res that thy blur out the license plates now. 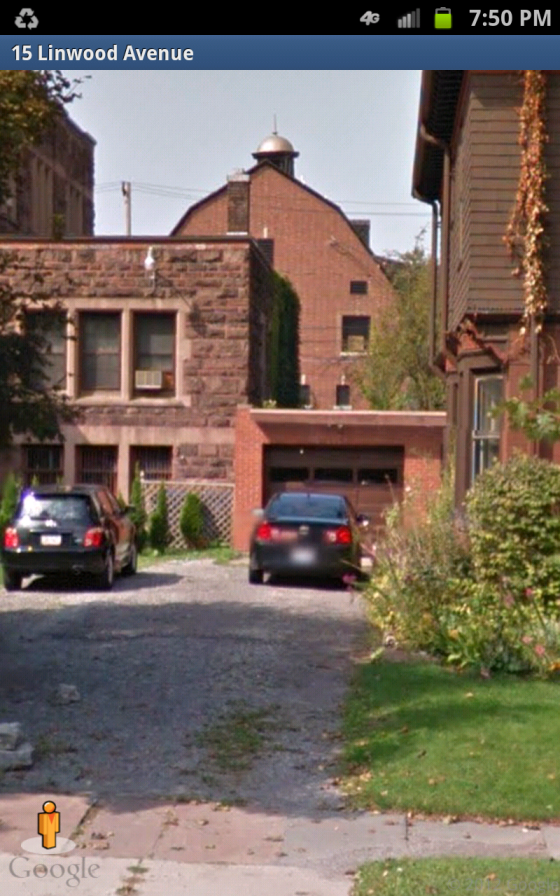 Damn, my brother and I are not famous anymore.

Bird Avenue also has new streetview. I think the pix are from the fall of last year.

I saw this at the coop today. Unfortunately, I just had pork chops covered in Bacon and procuitto so I am baconed out and didn't buy it. 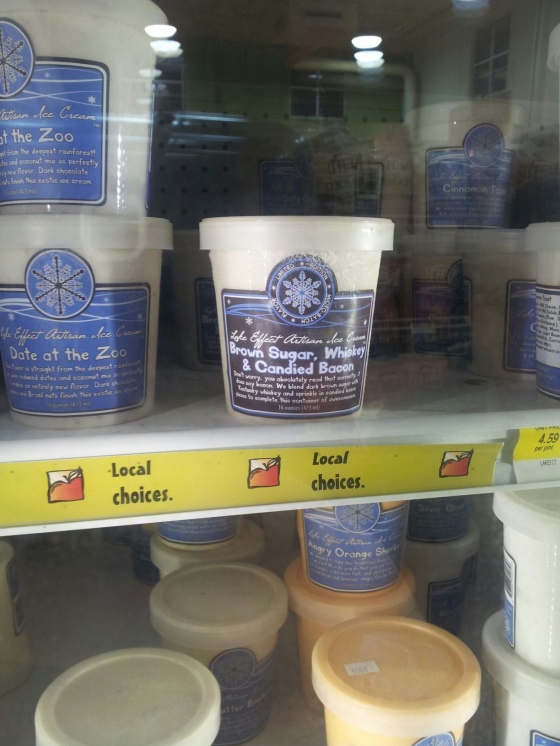 I'm sorry I didn't post about eating when I got some.... It to me tastes more like Whiskey then bacon but you should have tried it.... Last time I read about them they are also in the tops on Elmwood.... The day it came out at the co-op might have been the same day as The Mardi Gras Parade it was close so I didn't go till the next day and found the stuff in the Pizza Freezer also tried the loganberry and it was great... I found out about them through them being at Music Is Art... If you can buy the pricey stuff I say go for it and try it....Good stuff..... Wait maybe I did post ..... See this is why I need a cell phone with internet and all that fun stuff.... That way I could post from there and check in from there.... Of course someone one (A hot chick or maybe a couple hot chicks or some (e:peeps) even) might have to teach me how to....

i almost bought some Lake Effect Ice Cream once... i read the ingredient list and put it back.