(e:mike), (e:terry), (e:matthew) and I went shopping for a christmas computer for my parents and an imac for us. They ran out of imacs at crapusa so we ended up with the mac mini. For the parents we got an HP mini comp. Maybe now they can get DSL and actually get online.

For both computers it was so hard for me to buy a not cutting edge comp. It's amazing how cheap a non-server, non 3D graphics computers can be. I wanted to buy them one at Computers for Children but (e:mike) said no. He wanted new, namebrand, and warranty.

In the picture of our car, you can see the missing tire. Hopefully, the axel is all ok.

Has anyone noticed that Bestbuy super plaza on Niagara Falls Blvd is insane. I remember when I was a kid it was a field, now there are multiple football field sized stores and one of the largest parking lots in Buffalo. 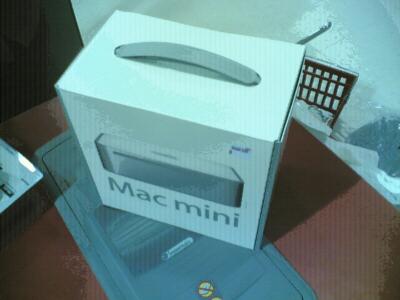 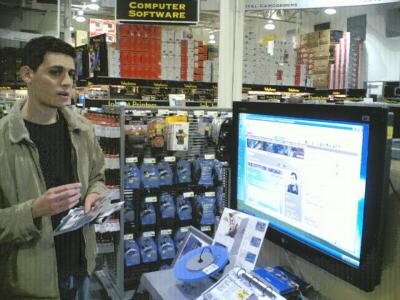 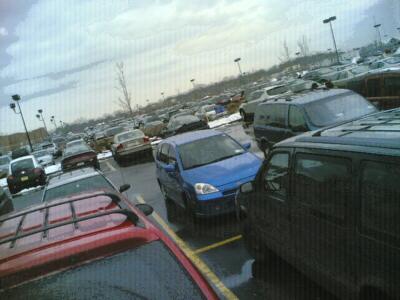 So I woke up today to discover that something I programmed back in 2003 broke which meant that all the journals got set back to 1969. It was horrible, luckily I had evertything backed up in various formats but I spent the entire day working on it. I got to fix up the old stuff to use the new format which is great but right now the next ten button is broken and it will just have to be that way because everyone will freak out on me if I don't stop now.

--update: If I had only checked my email earlier I would have seen that (e:twisted) had sent me a heads up about this way before I realized what was going on.

--update I removed them - time to go chill out

I decided to try out google ads on recommendation from (e:shawnr). He uses them for his site at

Personally, I hate the flamming comericalism of it and I think it does a really bad job targeting the ads. It is easy on his site because it is all about games and gaming systems, but on our it is really diverse and it doesn't seems smart enough yet. But seeing as he makes enought to pay for his hosting, I figure why not try it.

What is the point of targetted ads when you have targeted ads that are fake. Like this one from (e:leetee)'s journal where it choose cranberry sauce because of some mention of thansgiving.

Peeps that log in do not see them and as it is free to log in I see no point in feeling to guilty. I might just get rid of them either way, but seeing as not one signle person has donated in over 4 months - I am really sick of paying for it all myself. Although, I love the project and promise it will not go away ever - i just need to figure out some other means of support.

Soon enough we will be moving to the artvoice space. The server is all set up now, I am just waiting for the new mac ton arrive to replace it before I move it. I also cannot screw it all together right now becaus eit is in the tortoise room and its too cold for Basra when I open the closet that the server lives inside of.

If it picks out a few more god things then it's gone.

Damn! That'll learn me (as they might say in the south) not read Estrip on a daily basis.

I missed the google ad for buying cranberry sauce on eBay!!

I spent the day making the XHTML mobile version of the site pretty functional. It's not pretty yet but it is definately working. You can search, write in your epad, chat, read your messages, read the latest entries, and publish all from your mobile XHTML handset. The wap version of the site can do most of the same things on an older phone.

Some pictures from back in the day

My stupid phone does not save pics right anymore, so I am reduced to screen captures from the phone, lame. 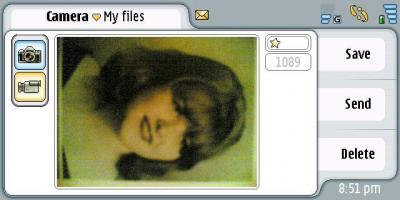 Paul Visco - Yearbook Quote: To flash to the Real Intraworld Push: hard to the other side. 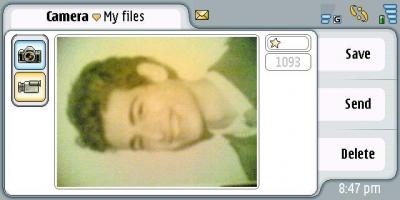 My mother has turned my old room into a craft/storage extravaganza. 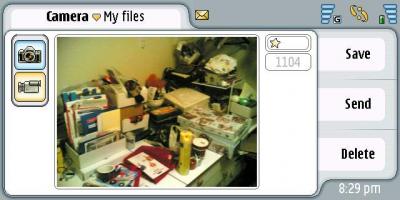 Dude I am going to kill you for posting my yearbook picture.

(e:lilho), who is missing all of her ID,etc and probably won't even be able to board the plane called to ask for a ride to the airport at 4am - the morning of thanksgiving. I would give her one but we don't have a car since (e:terry) had the accident yesterday which he hasn't mentioned yet. I will leave the details up to him but it's fair to say we a minus one tire but have one complete (e:terry) who now has to take the bus to work out in cheektowaga.

(e:terry) is lucky that there is a bus because otherwise he would be really stuck with his work being so fara way. (e:lilho) on the other hand is not so lucky. I cannot believe there is no public transportation to the airport during all flight hours. The first bus goes at 6:18am which is late. When I tried to plan the trip using the NFTA public transport planner

it gave me the following response. I think it meant the not only the trip to the airport but the broader trip to NYC. 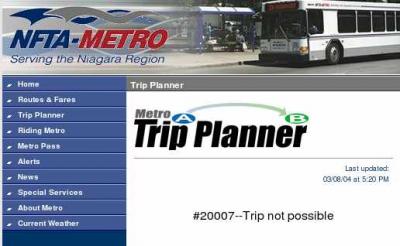 hey are you guys going out tonight?

I was thinking about some memories for the rememberbuffalo beta site

when I found this info on the bigorbit gallery site.

The interviewer is asking Xotec about the scene before him. Does anyone else remember those parties at the Ellen Terry Theatre. Those raves were so crazy. maybe it was just my first time being messed up but it changed my life for a lot of years. That theatre was like Showplace but cooler. Unfortunately, like showplace it has the nasty slanted floor. That made dancing way more dangerous.

(e:hodown) remember the stilt people? Who is Toni Billoni, the name sounds so familiar?

XOTEC: Non existent! (Other than two events Toni Billoni did in the early 1990s). Before I met the rest of the Tribe I was heavily involved in producing the first series of raves in the WNY area, at the old Ellen Terry Theatre on Grant and Potomac [now torn down], the Masten St Armory, the infamous TCI building [also torn down], etc. Anyway, it was at the first party at the Ellen Terry that I met Marcos, Christ and God and this whole sick twisted ride began, from hooking up at my first raves to playing together Friday nights at Asbury Alley [now Route 66, but historically quite seminal in terms of the development of WNY's underground electronic dance music roots]. We actually began throwing events as a collective in May a party in the basement of the Lafayette Hotel. Talk about underground! From then on we worked together to bring WNY some of the most twisted, unique events around.

Quoted from: SOUNDLAB | Dedicated to the Music, Media & Performance of Big Orbit Gallery

Tony Billoni was the original creator and curator of the Annual Artist and Models Affair...going back to the mid 80's - he passed it on to Hallwalls in the 90's for a fundraising event.

He is / as also on channel 7 late night on Saturdays...what's the name of that movie show? Can't remember right now...

I am so sad that Kuni's is closing

I guess just about everyone is. It was such an (e:strip) staple for so long. Rememebr the night a bunch of us went [inlink]ladycroft,76[/inlink].

I suppose something will be able to fill the spot as it is a prime elmwood location.

I can understand why he would want to take a break. That restaurant was always full and he definately put his all into it. Being that committed to a project can really drain you over time. Plus he must have made enough money to retire for a while.

Oh man! Kuni's was the first place I went to by myself to have sushi (my first time I had no choice). Kuni's will be sorely missed...

I'll have fond memories of our night out there with the Larson paparazzi crew. So sad.

I reckon i will have to go eat there for the first and last time, then, eh?

Today is my last day of work as the Mutlimedia Specialist at Canisius. It is bound to be a grueling day, as I think everyone will come to ask for help this last chance they get.

The server is getting better everyday. I appologize for this not being the most interesting topic but I promise it will be the coolest result. I have learned so much more about server admin this last week. Now I am really getting to be a pro at it. Well not exactly, but I am much more confident in being able to make it do whatever I want and I love CentOS.

One of the lastest upgrades now allows me to convert regular video to flash .flv video files using the command prompt - which means php can do it - making video accessible to more users via the flash player. That in addition to having extra space will allow us to incorporate a lot more video into the site.

Paul, it is not that it is not interesting. To me, it is just not understandable. When you speak computerese, i have to ask Walt for translations. It does not sound like English to me...

Making of a Server

I have been working feaverishly to get the new estrip server set up exactly how I want it. I decided to use CentOS because it is stable and tested and provides me with what I need.

Well, even if I don't like Ruby on Rails enopugh to switch yet, I have to say setup takes about a 5 minutes which sure as hell beats setting up PHP the way I want it. It could be because I have very customized desires for PHP while I have no ideas what I want form Ruby yet. Either way it was fast and easy. The next part I am working on is the mail server. That is my least favorite part but I guess in the end, one day to set up a really rad server is worth it.