Today we went shopping for new shoes for (e:terry) and (e:matthew). We only go about once every two years so by the time we go it is really necessary. I didn't get shoes because I spent too much on my phone annd I bought a pair of shoes one year ago. One more year to go!!

I wrote a letter to (e:twisted) at the mall while eating tastu teriaki chicken. Well not tasty but satisfying because I was so hungry. Poor (e:matthew) could barely eat anything. For some reason the cingular smtp server wasn't working so I couldn't send it. She also wasn't on IM when I tried so here it is.

Afterwards we went to elmwood to get clams one last time before summer ends. They are so yummy. 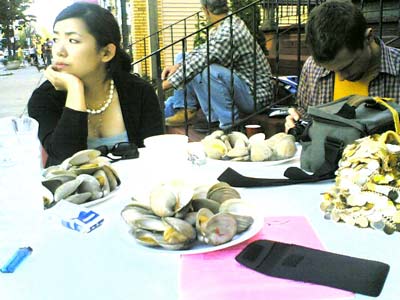 I saw that (e:jason) and (e:joshua) took down the banner, so if any wants to be the new home of it, it needs a new home. I would put it on linwood but i don't think it would serve it's purpose.

I made a new wallpaper for my phone. It appears smaller here than on the phone screen which is 640 x320

Those clams look really good. Why isn't anybody eating them?

I went to (e:haikuster)'s wedding [inlink]matthew,618[/inlink] yesterday with (e:matthew) and (e:terry). It was a beautiful ceremony at the Deleware Park Rose Gardens which look much nicer now that they planted flowers where the rose bushes died.

Sorry I have been so absent from everyone else's life this week. I am really busy trying to get my data sorted. (E:matthew), (e:terry) and I had fish (blue smiley), chicken (yellow smiley), and beef(red smiley). I had gotten the salmon but matthew couldn't eat the beef gravy so I had to switch. I was actually quite happy about it. I felt bad for (e:rachel) because everyone was talking about killing and eating animals and she is vegetarian.

This morning I went with my dad to help some lawyer who helped us out, fix his computer. He was a realy nice guy with an office on Hertel. I wa slooking around his office and he was the president of the Buffalo School Board for fifteen years. The problme with his computer was something with the quicktime browser update function hijacking dial-up. It was the first time I could say to someone that my phone was faster than their computer!

While we were out to breakfast my father said we are seeing the downfall of America unfold. I have a feeling he is right. He usually is.

Driving in the Dark

I got some awesome pics swinging the new phone aorund while driving. Nothing beats a phone that is an mp3 player. It makes commuting so much fun. Can anyone else believe what is happening to gas. This afternoon when I first went to cingular it was about $2.59 then by about 4PM it was about $3.09, then it got up to almost $4.00. (e:jesse) saw it at $3.78 and (e:mike) said some of the gas stations closed down.

Thank god I have amassed a collection of more than a thousand bus and metro tokens. Sometime they will be really valuable. 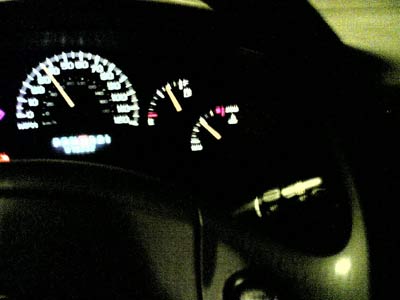 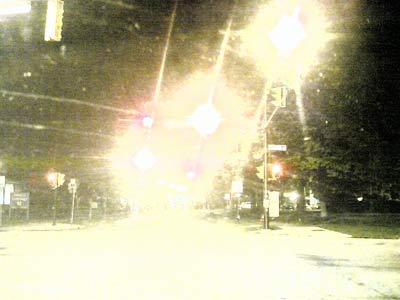 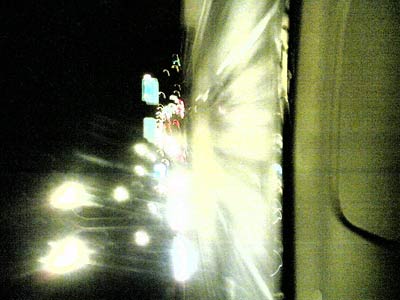 When I was going through old stuff to put on my phone I found this post apocalypse flood story I made with flash back in 2002. I fits today better than ever

The apocalptic flood flash is kool. But, that's an interesting focus for the end shot.

I switched to cingular for 130k/s service. Because it is an unlocked phone there ls no service contract. Next month I will have to cancel it and get it in (e:terry)'s name because (e:terry) gets a 20% government worker discount. That is a good savlngs on $45/month.

I seriously cannot believe that sketch works on thls phone. who would have thouqht. it can also process text as fast as i could type on the sidekick! I take back everything i said about there not belng a phone that could do everything t i wanted!

i am writing this from my new superphone. it is beyond amazing. tying on the in screen keyboard is simple and it even does really excellent handwriting recognition. i can't believe that it can do iframes and javascript. it really makes the sidekick look like trash. 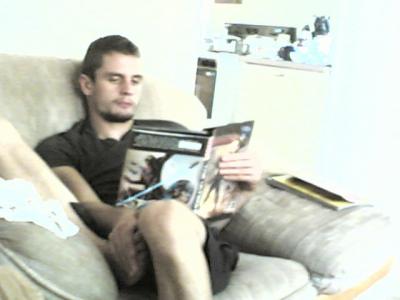 the phonne even has a filebrowser so i can upload from storage.

Am I a citizen, I get a phone

Well, the phone is finally arriving although the guy I bought it from wrote to say he forgot the stylus. That would be okay for any other phone but this one only uses a stylus as input. He is sending me the other one right away. Luckily it will work with the wacom stylus until then, although that is quite bulky. Maybe I will stop and pick up a treo stylus while I am waiting. The only thing I am really disappointed about is that the really amazing nokia SDK for the symbian phones only runs in windows! I haven't used windows in weeks, argh.

On another note, I am supposed to be filling out my tax paperwork for the job at UB but I lost my freakin' social security card and passport. Someone out there is probably trying to assume my debt right now. So I am basically nobody and moreover, I can't leave the country very easily. I am going to go sign up for a new social security card today and to report my passport is missing. It was time for a new one anyways because mine looked so different than a normal one. I got it in Berlin at the Consulate after my bag was stolen from a discotheque in Flensburg.

It had numbers stamped right through all the pages and the picture was glued on. Basically it looked very non-official and it expired this year anyways.

In the mean time, I can't really start my job. I find this to be quite annoying because it is for the same school I have been paying in state tuition at for four years and everything they do is filed under my social security number. Can't they just let this one slide and verify it another way.

Last night we watched part of a documentary about homeless gay street prostitutes in Hollywood. The ones in the worst situation had no papers. You never really think about how important your "papers" are until you don't have them fo a moment and you are suddenly nobody.

Hey Paul, stop by someday when you get your new phone and you are in the hood. I want to check it out. Or actually I do have a DVD full of jazz and funk for (e:Matthew) - I gotta drop that off sometime when I'm not a lazy fuck.

(e:uncutsaniflush) is right, there is no such thing as unbiased media. I have removed myself from the main stream media for about ten years now. Our television does PBS on antenae at about the same quality that this website would be at 28k.

With the internet offering so many thousands of alternatives, and the fact that the majority of you have broadband net connections, I don't understand why anyone subjecting themselves to the biased, commericial, corporate media from either side. We are not propagnda prey in a world controlled by one government media source. It's not like we live in China.

If you don't like the messages that the media you watch are giving you than change the media source. You can tune into what you want to hear via the net and tune out the other crap instead of watching it all the time. Maybe even try mixing news from various countries to get a better overall view of the situation. Why stress yourself out over it?

I used to get so mad listening to Rush "the hypocrite, pill popper" Limbaugh in the car on the way to or from work. I would actually find myself arguing with the radio. Then one day I realized I just didn't have to take it anymore and tuned him out permanently. I realized that he doesn't even matter and when I am not tuning in, he is essentially gone. Try podcasts! Better yet, make your own media alterntives.

No matter what side you are on, corporate level main stream media is essentially all about advertising and even if you are watching and critcizing you are still watching, paying and subconsciously absorbing the advertisements that make the whole system profitable. We live in a time when you can afford the luxury of just saying no. Biased corporate media can only die if we kill it.

Simply turn off the freakin' television. Don't buy "their" newspapers. Refuse to watch "their" movies and play "their" propaganda laden video games. Vote with your conscience and your money and if enough people agree with you the biased media source will simply go the way of dinosaur. If it doesn't then it means that the people want it, and that the bias in fact reflects the majority of the population. If that is the case then you are fighting a losing battle because Amerika is the home of majority wins.

Ok, I am off to go dream about high speed cell phone networks.

Paul I, dare I say it, totally agree with you about using the 'net to see how the news of events is reported in other countries.

It is amazing to me how different some events are reported outside of the U.S. The perspective can be totally different and ocassionally bewildering (especially from Asian news sources)

For the first year of the site we had two horrible web hosting companies in a row (whn and globat) till we found mosnterhosting.ca, which has been pretty reliable. Today I got an email fromt he old host globat saying for a $29.00 upgrade fee I could get 10GB space/and 300GB/transfer which sounds like a good deal but I remember they had the worst customer service and tons of problems.

I guess they haven't changed at all.