visual basic is ugly but easy

This morning I am studying visual basic while my computer is offline.

It is so primitive looking. 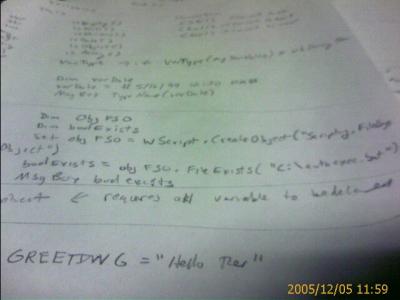 Look at it this way: if it's easy, you'll have more time to play around ;)

Fortunately, the schedule is variable. I will be developing mobile stuff for the crackberry.

Vbscript is ugly . It reminds me of programming the basic stamp. end if, lol

It has been years since I have seen 7am. It instantly brought me back to the feeling of waking up for high school.

I am excited to see what the day brings. 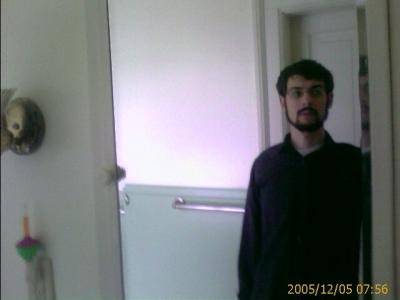 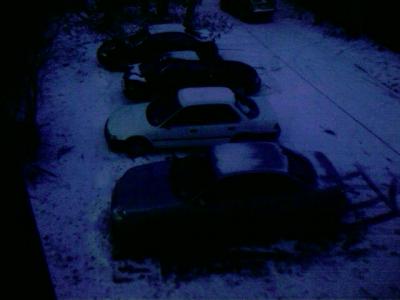 welcome to my world.

l hope your new job is everything you want it to be and more!! good luck!!

Good Luck on your first day at your new job, Paul!!

Last night we went out to Allen Street Hardware and the Pink for (e:rachel)'s birthday. I smoked lots of cigarettes. 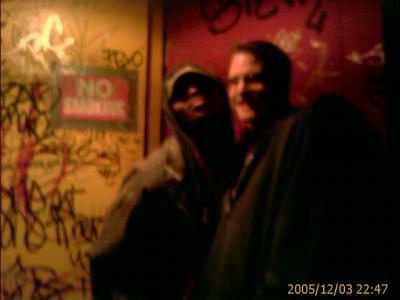 Being that I officially start work tomorrow morning at Roswell Park, I think it is an appropriate time to really quit smoking. I have been smoking since I was twelve.

I never smoked more than three cigarettes a day but I also have been rolling my own and mostly smoking unfilted cigarettes.

The teachers didn't seem to ever mind because we were often the life of the religion class. Whenever I was that hyper I would get really into class.

So afterwards we headed down Eugene over to Sara's and somehow we had cigarettes. I am going to assume that they came from Watson's on Deleware in Kenmore. They are the same people that own Watson's Candy but back then they had a restaurant too and in the back they had an unguarded cigarette machine which was great for a kid wanting cigarettes.

When we smoked heather got sick and threw up. I believe (e:iriesara) and I liked it and we became smokers. I think she loves them even more they I do. In fact, she kind of sounds like captain Jane Way from Star Trek Voyager.

(e:lilho) likes to smoke too. Here she is before and after smoking. 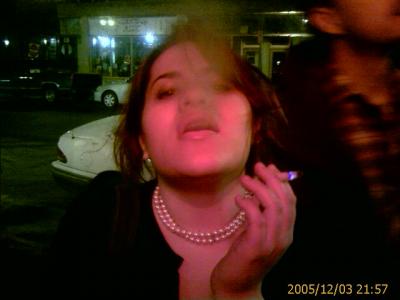 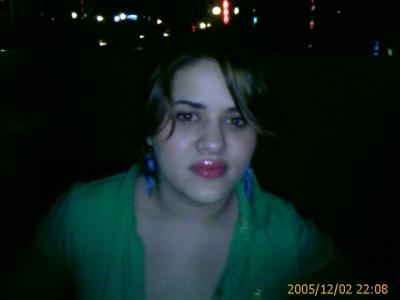 Paul, I think we got those cigarettes from the Swiss Chalet machine on Main Street next to George &amp; Co. on one of our infamous half-day excursions - remember, with lis gerber? Anyway, yes, heather totally heaved and we thought that was pretty funny. I personally have not had a day go by that I've smoked less than 3 cigs - hoping to quit soon. I'm now smoking as much as my brown little lungs can handle until then so that I get totally sick of it. I sound like Capt. Janeway? Not even like Kathleen Turner or something sexy like that? wow, thanks!

i was also at hardware and the pink last nite. guys rolling their own cigarettes is super hot. you should quit though. so should i ...

Rosewell has a smoking cessation program that could possibly be of help. If you try it let me know how it goes, I need to quit too.

Nothing beats live internet streaming radio at 128k on my mobile phone. I suggest

You can listen to it with any streaming internet player liek itunes, realplayer, or window media. It has radically reconfigured my thoughts about internet radio and radio as a medium.

Tongiht I met Val Townsend at the pink. Any friend of (e:shawnr)'s is a friend of mine.

i was the girl in the pink coat.

next time find me and say hi

I havn't tried streaming Radio in a long time. The few times I tried it the stations would stop working for some unknown reason. As soon as buffering starts then it becomes annoying. On another note I have never met Val. She sounds like she is a preaty cool chick from what i have heard on The EDGE.

I miss my brother

It'S only been a weekend but I miss (e:mike) already. going out for (e:rachel)'s birthday just isn't the same without him.

Ahh don't worry Paul. I will soon be home...as long as I survive the subway ride to the airport and the plane rides...and that is a big IF...tell Rachel I said Happy Birthday (is it her birthday?)

My phone had the same problem thate:shawnr's had with corrupt jpeg headers. Luckily, I am a master of hex data and regular expressions so I was able to fix it. 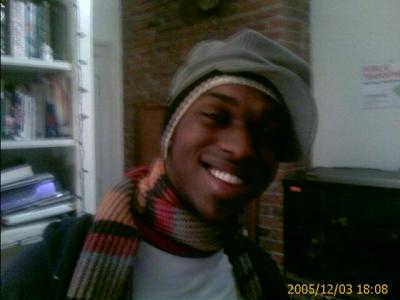 Now the journal is really ready for mobile use on my phone. 1 month until (e:flacidness) moves to NYC.

I have always hated windows in general. I never liked Windows 95,98 and XP was ok but still had all kinds of trouble. I have used about ten differetn flavors of linux and liked them al pretty much. i liked the mac OS.

But windows mobile 2005, is seriously the most amazing mobile operating system. I mean the phone itself is probably hard to compare to other ones because it has a 400mhz processor but windows mobile is so speedy. Far superior to the Symbian series 90 nokia that I just had before this and which cost just as much.

I can listen to (e:strip) radio live streaming with no lag or buffer. I am basically one happy boy. Thank you eLdrchlorine for providing continuous mobile entertainment.

So I got my dream phone today

. It does everything I wanted it too accept flash right now. The pictures are great and the picture mode is so spytastic as you can turn off the sounds. There is a one button take picture and one button record audio button. It has a keyboard.

We went to sprint and (e:terry) and (e:matthew) got cell phones today too. We ended up with a family plan. With eLterry's government discount we pay about $70/month and we share 400 minutes, 100 text messages and I have really fast internet. They have free internet right now and have a month to decide if they want it. I hope they keep it because then they can use the site mobilly also.

Slowly the site is more and more a mobile entity as I always hoped for. 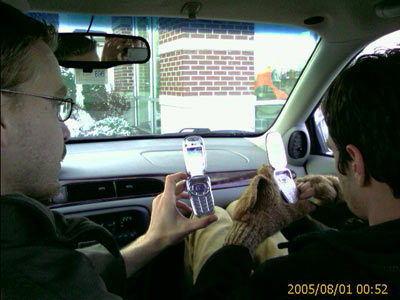 I foudn these polish cookies that I would have sworn were Italian. Maybe Nonna learned hwo to make them in America. 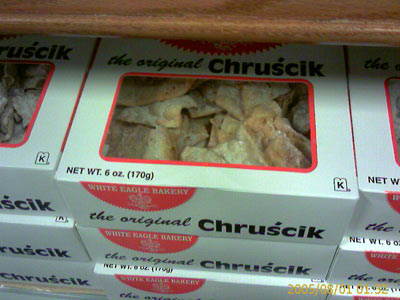 Has anyone tried monkfish before. It looks really yummy but it is expensive. 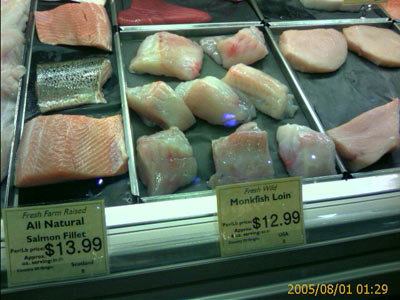 We bought another shipload of $400 in groceries. They all taste so yummy. 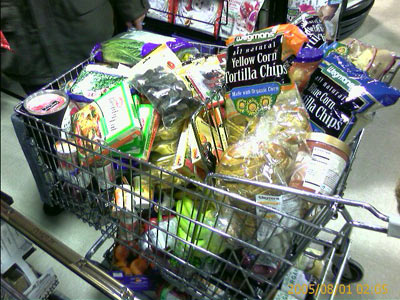 We probably should not have watched Willy Wonky and the Chocolate Factory before going grocery shopping. There is about a pound of chocolate sponge candy under the groceries. 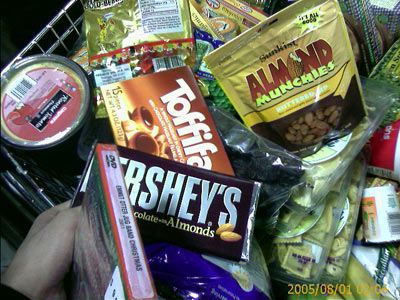 The one thing that weirds me out about the camera is that it came with this picture on it marked 8/1/2005 but the camera did not even get release untill just recently so what is up with that. Did a developer take it? It came new fatcory sealed fromt he factory. 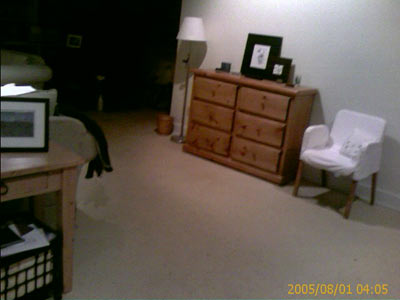 So (e:lilho) came to our house tonight with dog poop on her shoes. I think she should just throw them out. We were supposed to be recording new start up sounds for the site but I got sidetracked when (e:chris) came by with his new PPC-6700 mobile phone. I am going to buy one tomorrow - which is exciting. Because it has a keyboard, a working camera and a really fast Internet connection you can expect that I will be able to finally take my journal to the next level. I am not quite sure what to expect but it will be fantastic whatever it is.

So we got the mac set up in some sort of music studio with the giant Casio keyboard. Hopefully, this will inspire (e:terry) to write some magical new jingles for the site and finally put his music degree to some use.