The site will need some necessary changes for 2004 and one of them is the sign up process. It seems that people still don't realize that when you sign up you are expected to publish a jounral. There is no other reason to signUp. I think some people are still under the impression that you have to sign up to be a reader.

To deal with this and not end up having many empty journals in the list . I started turning journals off from public view. You can see a list of all of the hidden journals and other statistics at

The people with hidden journals can easily update and turn them via their update page. I think I am going ot make an automated system that turns your journal off when you sign up until your first post. Then if you ever reach 0 posts by deleting all of your entries (jesse) you will once again reach 0 status and then get hidden. 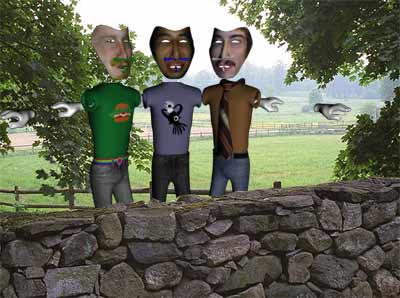 I am working on some new avatars, I will and links to more pics once I have time. The avatar file sthemselves are deigned in Maya but are made to be easily skianble by other users. 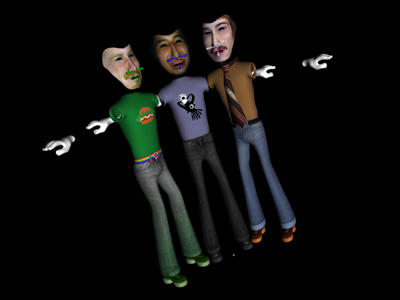 The zip code risk finder that Rachel posted seems to have some gliches. For example compare 14217 and 14222. They are both in Erie county yet ones says the county is in the top 10% dirtiest and the other in the top 30% dirtiest. Test it out and see hwat you think.

Currently, I own elmwoodstrip.org but it has nothing on it. I have finally decided to make it into a e-card site for which the users can upload cards and other people can send them and add messages. It will accept jpg, gif, and swf e-card. There will be thumbnails, etc. When you send it, they will be formulate dinto a web page that the recipient visits.

I think it is a great way to incorporate user art into the greater site and allow people to directly share that art. I could also see a e-card flash creation interface where multiple people can work on an e-card together. 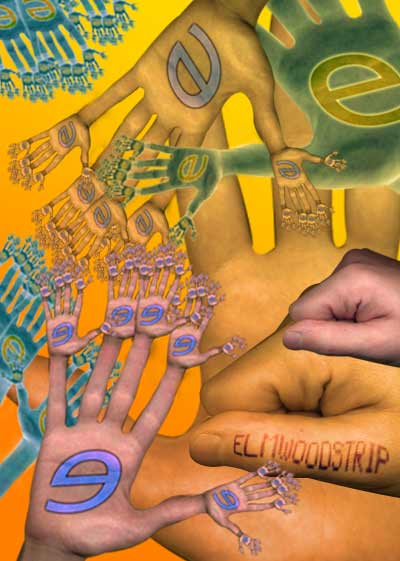 Another possibility is having images that serve as a basis for a card design and then let people download and modify it in order to get multiple iterations on the same idea and see people's personality reflected in the content.

Does anyone else have any ideas to take it from there?

Something happend and my digital reflection got distorted by more than a 01001 basis. I am going to have to reconfigure before the dance.

So, I was searching for links to stuff on elmwood and I ran into this guy's photography site.

He has some really good images from the Elmwood Art Festival, Arizona, Toronto, Pitzburg, Old Fort Niagara, etc. Check out one of the pics below. I invited him to start a jounral on our site. Hopefully, he will respond and we can see more of his talented work in the months to come. 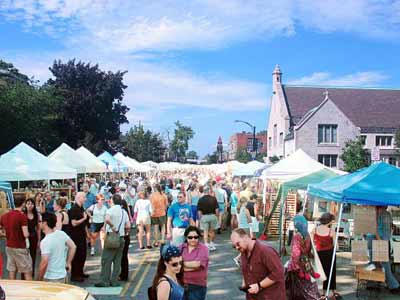 For once, I am posting something especially elmwood related. I am eating at Panos and I have to say they have really come a long way since the 90s, when Sara used to work here.

It used to be a semi greasy-spoon sort of like the Towne restaurant but more selection. Now they have a fancy rug, a wood finished surface on the walls, nicer lighting, and best of all a totally new menu. The old stuff is still there but now you can eat things like scallops and rack of lamb. They also have fried calamari both tasty Greek style and Buffalo style for about $6. Its actually a big portion.

The buffalo style Calamari is weird. It really seemed like a good idea but not once it was in my stomach. Terry, the freakin cheapskate won't let me get my calamaris. Whatever, debt ration crap.

This leads me to think its time for a serious job change. Being a professor is fun and all but there is seriously no money there. This is my game plan for 2004 (new job * leave buffalo + less cancer risk) + increased calamari = happy paul.


Here is a link to a map of the location -

Check this out, they actualy sprinkle spices around the edge of the plate. 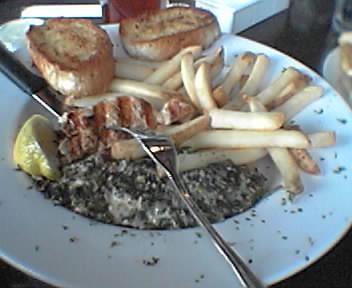 This guy named Bill Rapaport, who has a restaurant review site

gave them a bad review which ended with: I was also surprised to find out that they don't make Texas hots any more--Panos used to have his own "secret recipe", and the stuff was quite amazing. They don't even serve hot dogs. Overrated--Overpriced--Underachieving food--Service was slow."

I have to say I personally am glad they put the hot dog business behind them, and I expect they will make a lot more money now. Bill, you need to put the hot dogs down and spent the time updating your site out of the early 1990s look. Get with the time.

So do you ever go swimming at Zoar valley. We have for years, playing in the mud at the banks and camping in the forest. Eat food cooked on the wood, etc. Well it just happens to be down stream from a nuclear Waste dump that makes the cancer sources in Tonawanda look like nothing.

Here is a site with lots of information

My favorite are the lagoons. . . 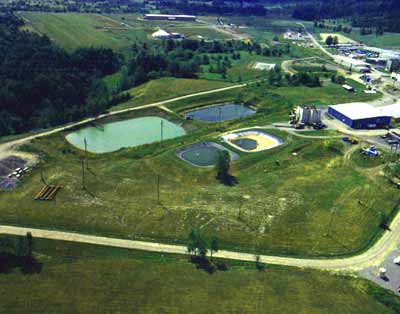 Several lagoons are still used to hold liquids with a short half-life. When the fluids meet government regulated safety standards they are released into nearby streams. Streams that I swam in a lot.

I feel violated by my local government

Did you play in any of these places around Woodward and Military in Kenmore. I did - very often, I used to dig in the dirt and hide around this building. I turns out that it was radioactive after all. I really played here. No kidding, ten years long.

We knew that we were not supposed to go there. But as a young kid, we thought it was because it was private property and not because it made us sick. Its not like I lived in the neighborhood and happend to be second-hand exposed. I actually played on these piles of toxic death.

Does any one else rememeber them? Believe it or not I have an actual photo of me playing here in the mid eighties. I will post it as soon as I scan it.

The photo of the guy in a space suite is at Linde/Praxair. I actually worked there n the mid 90s when they were digging this shit up and saw these people in space suits while sitting at a picnic tabel during my lunch break.

I talked to my father who assured me that it's ok. And that short term exposure is not so bad, even though I lived there for 18 years and played there for all my formative years, not to mention working there.

Here are some pictures so you know where I am talking about below and here are links to more.

F.A.C.T.S. is a non-governmental, non-profit, public interest organization located in the Western New York area. F.A.C.T.S. was recognized by the U.S.Department of Energy (DOE) as a "community coalition" stakeholder during the required public review process to select a "final" cleanup plan for several Tonawanda, NY properties that were recklessly contaminated with thousands of tons and millions of gallons of Manhattan Project radioactive wastes produced by a dirty wartime uranium refinery that operated in the Tonawanda area in the 1940s. 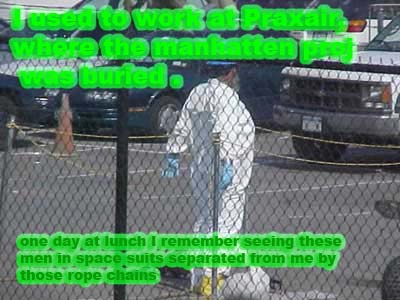 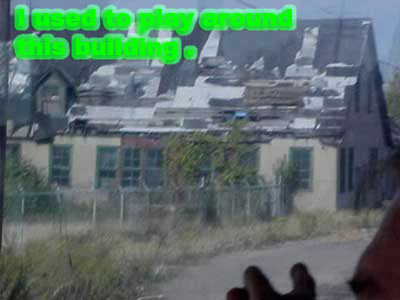 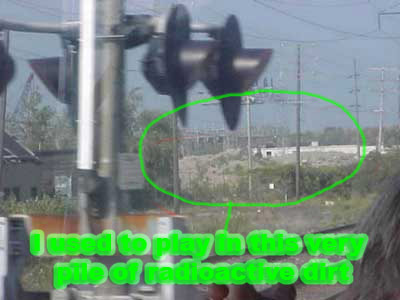 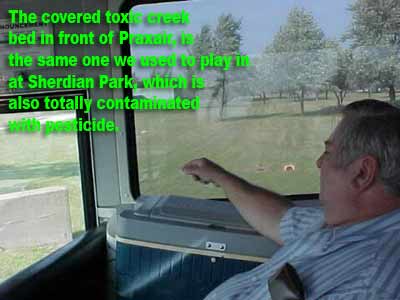 The incidence of cancer in the neighborhoods surrounding a Town of Tonawanda site where the federal government dumped radioactive waste during World War II is "statistically significantly more than the number of cases expected," according to a state Department of Health study released Thursday.

"It's about 10 percent (higher)," said Aura L. Weinstein, director of the Cancer Surveillance Program for the health department. "A difference of this size is not likely due to chance."

Health officials found that in the 14150 and 14217 ZIP codes, there were 1,197 males with cancer, compared with the 1,084 expected to have cancer, based on standard cancer-incidence rates by age and sex for New York State outside of New York City.

Weinstein said female cancer rates were found to be 1,201 cases versus the 1,101 cases that were expected.

There were 169 colorectal cancer cases in both men and women, compared with 135 and 143 respective cases that were expected, officials said. Brain and other nervous system cancers in men and breast, thyroid and uterine cancer in women were also above expected levels.

Weinstein cautioned that the statistics do not take into account heredity, occupational exposures or diet.

"This study is not capable of proving any cause-and-effect relationship," she said. "We don't know whether any of these people with cancer were exposed to anything from the Linde site."

Weinstein also pointed out cancers of the cervix along with the kidney and pelvic areas in women were actually lower than the health department expected.

Nevertheless, health department officials said they will pursue additional studies over a longer time frame in the neighborhoods immediately surrounding the site. The results of those studies are expected sometime next year, officials said.

The meeting, in the cafeteria of the Holmes Elementary School, was sparsely attended.

"It's a sham as far as I'm concerned. People should be notified," Rider said. "You can't have a public meeting without the public."

Swanick told health officials that more than just the news media should be notified, and that they should consider scheduling such meetings away from the holiday period and in a different location to ensure that all residents interested in the issue can attend.

"We'll help you get to the public, but it can't happen this way," Swanick said. Health department officials promised a better effort to notify residents.

In the subsequent study, Swanick suggested health department officials also take a look at other areas in the town, including the "Mud Flats" near the Youngmann Highway and the town's nearby landfill.