I discovered that my tongue is bigger than anyone at my house right now. . . I hope that counts for something!!

For once I am truly disapointed in my students. Not the intro level ones either. Its my advanced class. I am so upset at the lack of effort my advance students give. They are seriously not trying and I am not sure why. Maybe they are overwhelmed by the possibilities of 3D design. However, I think that they are just unorganized. Some of them have projects that are really well thought out and well designed. For example, this one guy modeled an original iron toy train and another made an airplane that is a replica of a biplane - a couple other nice ones too. As for the others, I am especially sick of people coming to class without their homework and expecting that I do it for them or worse yet tryoing to do it in class while I explain something new, they will never get jobs once they graduate.

You may ask why am I writing this. Well, I got this offer for my students to create some 3D web presentations for the Wirefusion site. I think this is a pretty big honor and yet I am kinda of nervous accepting with the kind of crap some people are handing in.

I am not afraid to accept the situation where I become one with the machine. Sometimes I even welcome it, with the idea that it quickly bridges the gap between me and the collective knowledge the internet holds. I spend way to much time interfacing with machines in a primitive mouse/keyboard way and would love the opportunity to merge for convenience. However, I remain reluctant to accept a cyborg future for myself. My fear is not based on losing myself or being dominated by the machine's will but rather being dominated by the humans that make the machine which would allow me to be a cyborg.

An aspect often overlooked when discussing the role of the machine in the modern human condition is that the machine itself embodies only what the creator of the machine considered relevant. A machine is a reflection of the will of the individual programmers and engineers. This becomes a serious problem when we are dealing with ethics of internal computing. Even if the argument is that machines will be able to create themselves in the future without humans being involved. There is still the aspect that the original machines which made the machines, which in turn made the newest generation of autonomous machines are still dependent on the original design specification created by the humans in power at the time of the original machines creation.

What may seem even more terrifying for woman is that men created the computer languages and hardware structures that we use today. Granted there may be many females in the field today but the field itself was created by a the will of men. Future machine that will be considered for the creation of cyborgian humans will be based on the history computer sciences. The languages that program them may be new but will definitely be based on what languages were in the past like C or java - all languages built by men. Thus the machines must innately reflect a male perspective. The nature of future cognitive computers will definitely have a very masculine way of thinking unless there is some major intervention by woman thinkers. This leads to a situation where men inscribe their cognitive ideals onto a chip. Which is then implanted into a woman, where she begins either to function and think like a man or how a man wants a woman to think, being dominated by the male ideal - or does not accept the chip. Thus being evolutionarily left behind in the cyborgian transformation.

Machines, can be easily dominated by the malicious intent of a select group of people in power. Email servers for example, a society shifting machine that practically replaces the need for transportation in terms of messages and information. However, add "carnivore" and it becomes reminiscent of Big Brother. The issue being that the people creating carnivore, do not see it as infringing or unethical. They see it as "justice prevailing over the evil terrorists." What happens when the people in power, the ones who create programs/machines such as carnivore make the machines that may be someday implanted under my skin or in my brain.

Most importantly, It is easy to believe that the producers of these machines and programs that would directly interface with the human are going to be profit driven. They therefore would directly have interest in raising your purchasing drive. Today's machines can feed humans information, but there is no guarantee that information is true. Because of the physical separation between man and machine we can chose to ignore information that we perceive to be incorrect or of malicious controlling intent. For example, an advertisement for pornography on the internet. Who is to say that once we accept this information into an internally related machine interface that we will retain the ability to reject information. Once the gap has been bridged between man and machine, there is nothing stopping the influence of micropropandga.

Will we just be converted in buying machines - or slaves of the remaining humans who created the interface.

Lastly, even if you exclude the possible unethical agenda of the cyborgian interface creator, there is still the issue of computer viri. A computer virus of machine that may regulate your motor control and/or breathing, and or cognitive control would be a source of outside control by a third party. For example, a hacker could program you to carry out his/her murderous wishes. Also, viri could be made o shut you down. In the end I fear the influence of the human in the creation of the cyrborg n the same way I fear George Bush in the creation of a global democracy;

Oh, remember when I used to think about more than my orange tongue.

So, i think that my there.com avatar is really too fancy for me. Check him out. He isn't half as intesting as my second life Avatar. What do you think?

By the way my avatars name is apfeljung, the same as the second life one. IM me sometime if you are there. 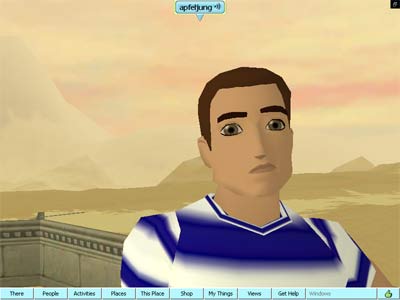 I miss that environment. It was quite beautiful.

New Banner and My Jeans

I changed the elmwood banner to celebrate version 1.2. I also got a screenshot of the new "temporary" jeans I textured for there.com. They 80's style ripped but cost me $4 to fabricate. Its kind of a rip off in there. This whole scenario is rather ridiculous in that I would proably never spend $4 on a pair of jeans in real life. As a matter of a fact, while discussing over dinner, the three of us realised we had not bought any new clothes in two years. 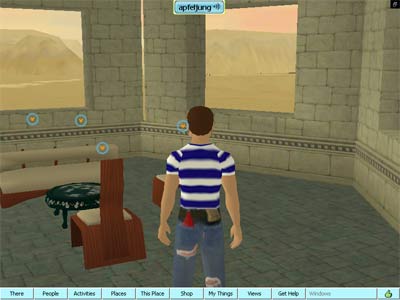 I gave in and bought an American Airboat for $20. I figured that it really suited my nationalist patriotism and it picks up all the ladies 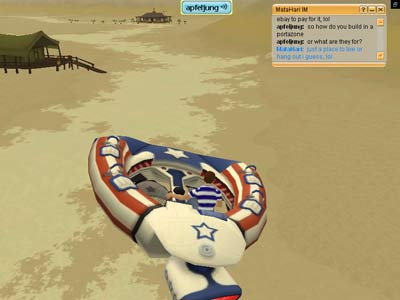 No art is about the medium or asthetic but about your response. While at the Rough and Ready thing at Fusion, I thought I was losing sight with the artists vision and then I realized whatever visions I was having was the artists vision.

Recently, I have noticed a side effect of virtual worlds is really vivid dreaming. It is perhaps an important aspect of the experience that is often overlooked.

that is so convinceing that I wake up believing I'm having an accident. I even visit my virtual house in my dreams. This cycle is often reversed in that my modeling is inspired from my dreams, which to me, demonstrates that this medium is allowing me to share my dream space with others by adding "a little electricity."

I added some links to my Canisius Site

Honestly, I hate the Canisius Site

because I have no PHP or mySQL, which makes it really boring. But I have decided that by adding my links there, I will be able to gain more status on google.

Visit me in second life

Well, I am going spending some time in

doing research for my thesis on virual communities. You can visit me there sometime. My avatars name is apfeljung. If you want send me an email and we can meet up. This is what he looks like. 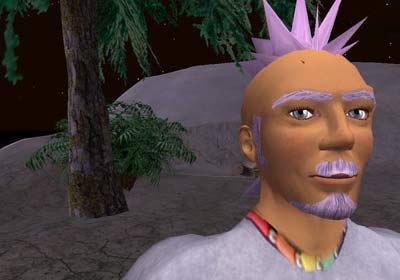