Do You Wanna Hang Out

i always want to hang out w/ italian stallions

Those 5 words are hard to say. Some people take it the wrong way and think you are asking to be their boyfriend. I told a girl i wanted to hang out with her and she said she wasn't looking for a boyfriend. I got offended but we did end up going out so be bold and just say it.

if you asked me i'd say 'oh yah sure you betcha'. but i know what you're getting at...i vote we all sign up for lessons in boldness :)

mk is the bnest friend dever!!!!! i just made a her adrink and its arealy strong. this may or may not be mk

and for the record, i juyst said to mk "how do all these glittery men get in my drink?"

HAPPY 25th BIRTHDAY MATT!!! I HOPE IT IS EVERYTHING YOU WANT IT TO BE!!! (wow that sounds so card from your elderly great aunt type of greeting) Anywho, happy birthday. I hope I can do my part in making your party interesting and memorable.

What A Great Start to the Weekend

I passed the test!!! YES!! That's a load off my back. With the nervousness gone now a fun St. Patty's Day weekend can commence. Tonight some country line dancing with the crew followed by a short day at work tomorow and doing some deliveries where I get some tips which is nice. Then Jill's birthday dinner and going out tomorrow night and Matt's birthday on Saturdya. And then the St. Patty's Day Parade and all that entails on Sunday. YES WHAT A GREAT WEEK!!!

I almost forgot (how could I forget?) A visit by (e:howdown) !! YES! That is always a party!

Wow! I am so gullible and should never be on a jury. I honesly could believe anything someone is trying to convince me of. I watched some like 20/20 or Dateline or Larry King or something speical about this guy who supposedly had murdered his wife in like the 70's. Anyway, while he was talking I was so convinced he was innocent and could not believe he was so wrongly convicted like it actually made me upset he was in jial for something he didn't do. Then the victim's brother was on talking and i was like on wow the guy in jail totally did do it, I can't believe he tricked me. I can honestly be swayed to believe anything..seriusly try it out sometime and see if you can convnice me of something completely ridiculous and then later on of a compelety opposite ridiculous thing.

I think sometimes I am bad at making new friends because I am so unwilling to give up on my old firneds for even a minute. LIke only if nothing is happening with them will I be willing to hang out with a new person no matter how much I want to just cuz I feel like that is how it always was. Like I can't imagine saying no to hanging out with them for someone else. I should work on that. I am trying to change that...hopefully it will work.

i really want to book a house this summer so let's do it!

Uh who says you have to drop your old friends to make new ones????

i think i was watching that same thing. did the guy have twin daughters? i totally believed him too, but then i left and when i came back his brother was saying that he set him up to do it or something, i was so confused, i really thought he was innocent too. but the daughters believed in him so i think that really helped in pushing me to believe him.

honestly, i think the show just did that. they make you believe something then throw a spin into it and then you dont know what to think!

Did anyone else hear that Dennis Quaid confessed today to being anorexic. I guess years ago he had to lose lots of weight for a role and since then has been anorexic on and off. Like he said everytime he looks in the mirror, all he sees is fat. This makes me think about two things...

1. Dennis Quaid is not really skinny so um is he really anorexic or publicity stunt?

2. if he is really anorexic then do you think that is why Meg Ryan left him? I totally could see her doing that. She is dumb...i don' t like her...i haven't since she dated russell crowe...eww.

I love how you know all the latest celeb gossip. When I heard that I was like oh please- this is so a cry to get on Oprah.

Me, (e:mk), jen and diana decided to go to East Aurora for the day yesterday. It was nice out and so we wanted to just walk around and shop and eat. It was nice. We went to Vidler's which I love. It is just chock full of crap and penny candy. And they have a popcorn machine where you get a bag of popcorn for like 10 cents. Literally 10 cents. It is awesome. I also bought some tasty penny candy and FOR THE FIRST TIME IN YEARS I FOUND CANDY CIGARETTES!!! I loved candy cigarettes when I was little but then they stopped having them anywhere but they had them there and they were so good. We went through like six packs yesterday, I am such a kid when I get candy, as in I have to eat it all right away. We also found if you light a candy cigareete, it smells good like a smore. Me and my friends are such classy 22/23 year olds that we were pretending to smoke fake cigarettes all night while we were out/at spot/ambrosia/walking. When will we stop being so cool!?!

I found some good finds while shopping. Besides the candy cigarettes and popcorn I also bought a video called Alice in Wonderland in Paris. I guess after she went to Wonderland, the next best place is Paris.It is about how after Wonderland she wanted to go to Paris. And she meets Francois a business mouse who is doing a cheese survey. And she will only tell him her favorite kind of cheese if he takes her to Paris. So he feeds her a magical cheese and then the fun ensues....how super random! I can't wait to watch it! I also bought a book at a used book store called 101 uses for a dead preppie. I just thought that was random too and it only cost 92 cents. Except you had to crawl under a table to look at the 92 cent books. None of my friends would but I have no shame and thank god I don't becuase I was able to find that great book.

Well I am loving this nice weather, even if it is rainy today at least it is warm...too cheers for spring!!!

Boomerangs and the such

No, not the kind of boomerangs those crazy aussies use but the new restaurant on Niagara Street sorta near the Peace Bridge. Me and (e:Mk) waited an hour last night to get a table. It was crazy though any place that has fish fries on a friday in lent in buffalo is always packed. I wouldn't have minded waiting except the guy who was seating definetely didn't like us for some reason. He definetely seated people who came in after us before us and was like totally ignoring us. The waiter was nice though and I tihnk totally noticed and offered to make us free drinks and stuff so that was nice even though we said we didn't want any. Anywho, once we got seated the food and service was good and so it it was good overall except the stupid host. His sheet where he wrote down peoples names was really crazy, their was no list-like quality about it , it was just names scribbled all over it everywhere. ANyway, so if you are going to go my recommendation is make reservations. Oh and be Italian. Everyone that worked and/or was eating there looked Italian, except Mary Kate, I tihnk that may be why we weren't seated fast. Cuz she is a craz yIrishmen.

After that we went to Friday's for dessert with Matt and (e:diana) and it was ok. I really don't like Friday's though except their tasty mints.

Then it was off to SoHo with (e:amanda) and jessica where they knew the bartender who gave us free drinks and shots which was nice. And VIP passes so you can cut in line and not pay cover. I have ended up at SoHo a lot lately and would never choose to go there proly but it has ended up fun.

Then I ended up going to pink and met up with (e:lilho) , (e:terry) and chris from california. The Pink and Soho have very different crowds and neither is really my scene or actually both are kinda I guess. I am not sure what my scene is. Anywho thats all for now.....

A Poet Among Us

So I found this little number in an anthology of poems and drawings circa 1989. The catch is it is by an (e:strip)per. Can any of you guess who it is or do any of you remember writing it?

Appropriate
Praise from
Person to person,
Raising one;s
Esteem.
Complimentary.
Indescribable feeling of
Acceptance
To be on of the gang.
It's a nice feeling
Of
Need.

Anyone know whose this is?

heard it when you wrote it perhaps?

Mike why do I feel like Ive heard that somewhere before?

I love the photo booth at Frizzy's. The sign now says it takes 7 minutes for a photo. I swear it used to say 2 but it always took like 7 anwyay but the new sign makes it seem much longer. Anywho, I love the photo booth and have quite the collection of photos from it over the years...so many good times. Here is one from Teres's going away party...hopefully more to come as I get control of them from my frineds (I like to be the holder of all pictures/memories) 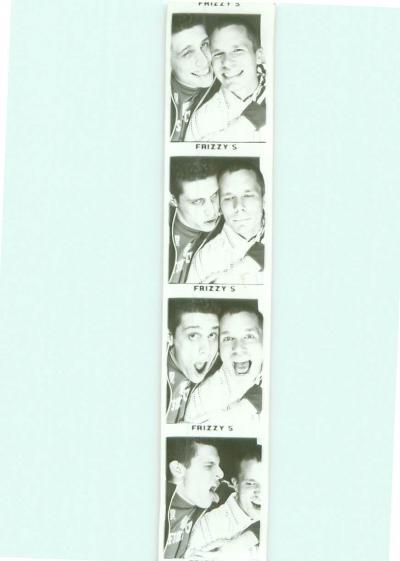