Just a little addendum....it must be so great to be Queen knowing everyone curtsys to you and you curtsy to noone!

hehe - did anyone ever tell you just how much you resemble Prince William?

and at an event, no one wears the same colour (spelled the UK and Canadian way on purpose!) as you!

I heart the monarchy. I heart all royalty. I seriously am a big fan of royalty and wish we had some in America and more importantly that I was part of it. I don't even really wanna just be rich I really want and have always wanted to be royal. THere is something so great of not really having to have done anything to earn but just be born into it. That is the best kind of money and power to have. I like all the pomp and circumstance and ridiculous rules of who curtsies to who and who can continue to eat when other people stop and what order to enter a room in. Frankly I think I might start enacting rules like that into my daily life. I think it would be much more entertaining. 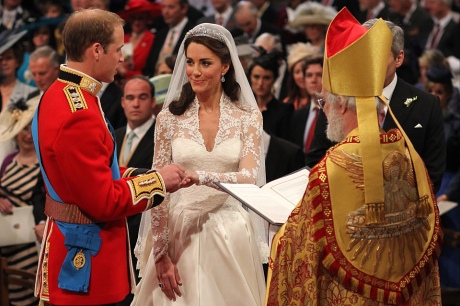 I am a little disappointed in myself that I did not get up at 4am to start watching but I did start at like 7:30 and watched til 10 and then read about it incessantly online and watched clips. IT really was awesome. I just wanted to be there so bad and not in the freakin crowd outside but inside the abbey. OH what I would have done to be there. I also love all the crazy hats the British wear. Why don't we do that here? 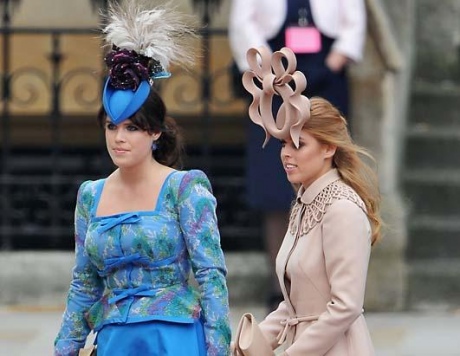 I did like that at work I was the go to guy for royal information about everything. Speaking of which Prince Harry's girlfriend..she doesn't look so great.

I know people think royalty is stupid and unnecessary in this day and age and everything but I do think overall they really do help to unite and build something for a country to rally around. and I just like it so I don't want it to go away. I am by no means particularly in love with just British royalty, give me Danish, give me Norwegian, give me pushed out and destitute Italian or French even. I love it all and IL ove how serious people that are within that level of social class really like follow a lot of ridiculousness in rules and whatnot and take it all very seriously! I want it! but really in the end I think I just want a fancy tiara!

P.S. Did you all see the almost emergency when the wedding ring DID NOT easily glide over her fingers, someone's hands must have been bloated even though she was such a skinny minny

1. We Have Royalty they are called The Kennedy's
2. See to me Kings and that thing are from History... Now I don't know how they lost there power and how a form of elected people took over but once that happens just Vanish.... I'm sorry but If You are called queen you have to rule the country it is kinda like how the south re does battles they lost ....
3. Some places still have Kings But we call them Dictator lets use the movie example think of what an evil king does and how he hurts the people and keeps all the power to himself then His son gets the throne sounds like Kim Jong ill to me

Of course this being said if I lived in England or really any where in Europe I would feel differently...... Yes I'm part English and If I wasn't working it would have been cool to see......

The British ones even gave their own religion build around them. That's power. The tan hat is perhaps the stupidest hat I have ever seen.

Everyone do yourself a favor and go to logotv.com and watch the New , Now Next awards. It is the most randawesome thing ever! It seriously is hilarioulsy wonderful. It is an awards show about what is new, now and next for 2011 and features tons of pseudo-celebs and reality stars and drag queens with some real celebs mixed in. (and why are some of them there?)

The first award was for something I can't remember but all I know was the NKOTB /Backstreet Boys concert beat out angry birds, netflix, and the assistant from The A-list (which prolly noone has ever seen)! The thing about it was Joey Mcintire actually seemed really excited to win, like it was possibly the best night of his life.

Oh and did I mention it is hosted by James Vanderbeek (who is definitely not New Now or Next?) whose catch phrase for the night is Fierce Bitch and was just fondled by a drag queen. IT is only like a quarter of the way thru and I am loving it! DO YOURSELF A FAVOR AND WATCH THEM!

OK i swear even I , the celebrity /reality show junkie has not heard of half these people but i still love it! 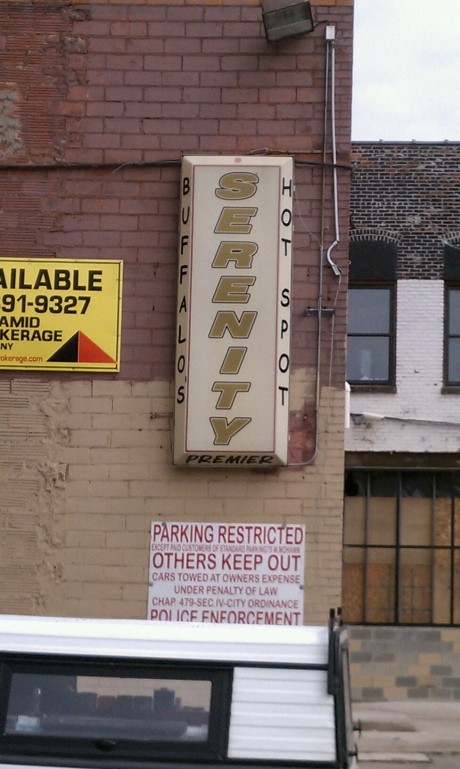 You shouldn't judge a book by its cover. Maybe its the hottest club ever.

were there really trains pulled by horses ? 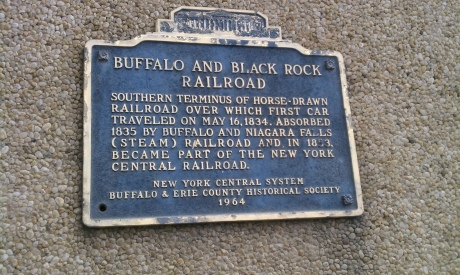 They must have been stagecoaches not real rail cars...

I want one. No seriously, how can it be. I would think it would be so slow.

I'm not a history bluff but I would believe the sign... It seems I have seen some black and white photo of it or maybe it was in some movie.... is it possible that rail cars where put on boats that where pulled by donkey on the erie canal but that is different there are horses that are just for pulling stuff so it makes sense that they could pull freight .... I also wonder if maybe there is land they could travel that a train couldn't like hills not sure.... Sounds like a good research project for ya I expect a 7 page paper in a week... HA....

So after my haircut I decided to shave off my facial hair today. I am not sure how I feel about it. I look younger and I do like the change of pace but I prolly look better with facial hair. what do u think ? 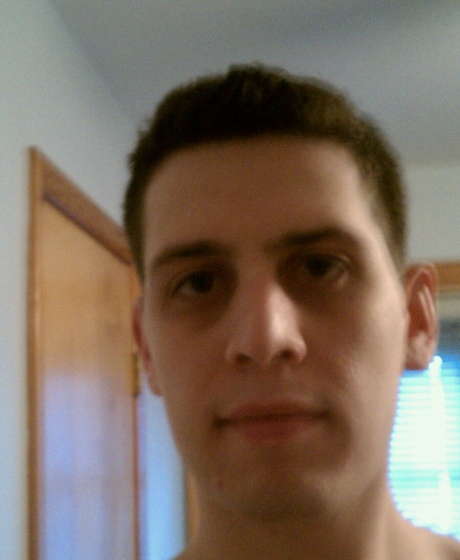 Aha! I was thinking of whom you reminded me of... and its Shia LeBeouf when he was younger and funnier. (Nickelodeon, Even Stevens)

That's an interesting look for you... You should try the handlebar moustache next. ;-)

I think you look better with a beard. I feel the same way about me.

I guess I will have to see in person. You're cute either way.

Me, Dave and Julie went for our first cookout of the summer at Lasalle Park the other day. Or Front Park? Or are those really the same thing? Anywho it was nice to get some grilled hamburger and hotdog goodness and potato salad and grilled asparagus and yumminess. It was a little cold at night by the water so we hastily had to leave when we all started to freeze but not before first trying to take a picture infront of the sunset/water...unfortunately none of the photos came out wel, these were prolly the best. 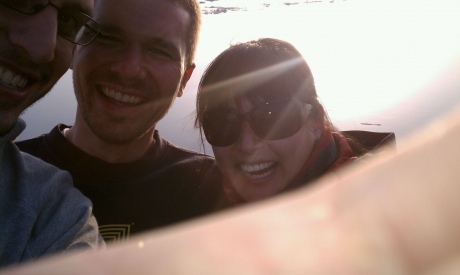 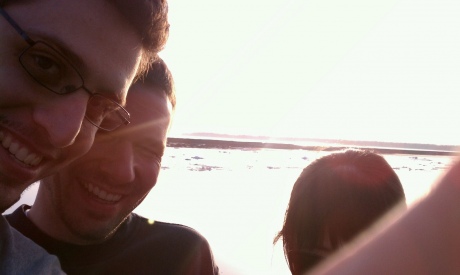 That was my stupid idea (e:metalpeter). I knew it wouldn't work but I wanted to show the ice, we definitely should have had the camera in the other direction.

Definitely enjoyed a good time. I love me my barBQ.

Front Park is the 1st one and is to the right as you head towards the water there is like a big hill not sure if the old ice rink is still at the bottom of it..... laSalle is right on the water with the pool and that pumping station thing.... As for that huge grass area where Ted's used to be not sure......

So shooting into the sun that is a sunset and your faces coming out visible good luck with that.............

Oh I looked for you at Delaware Park and didn't see you but I guess we had the wrong park, lol.

I really like those pics. You all look so happy! :)

Get Your Double Dream Hands Ready

I want everyone to learn this dance before the next (e:strip) party. Step, Clap, JAZZ HAND BURST!!!!!!!!

I've been practicing this for 3 days now and I feel like I will never get it, oh gawd I hope I don't screw up.

That's complicated. Maybe you could teach it to the rest of us...

How did you find this? Its so you. Can you do it yet?

For years I have been trying to figure out if there really was a show or if I had made it up about these detective kinda like Drag Net but they solved math problems. I was also pretty sure one episode involved a gorilla, well a man dressed as a gorilla. Noone else I have ever talked to about it has ever remembered it at all. Then today I'm looking at wikipedia about Zoobillee Zoo and what is on the bottom as related but SQUARE ONE TELEVISON and I was like I think that's it. And so I go to the page and it was. It was a whole show about math on PBS from 1987-1994 and each episode ended with an episode of Mathnet. I still haven't found mention of a gorilla but this is definitely it! It feels so good to finally find it and know I didn't make it up. I could always picture it so vividly I knew it had to be real .

P.S. I just found it on a fan website episode 100-105 the episode of the missing monkey:

1.2 "The Problem of the Missing Monkey"
Episodes 101-105. Rerun in 136-140.
Directed by Charles S. Dubin
Co-Starring Yeardley Smith (Jane Rice-Burroughs), Dale Park (Grunt), J. Downing (Stock Boy), Lou Cutell (Store Manager), Dick Wilson (Grocer), Paul Tuerpe (Pie Balboa), Joseph Whipp (Buck Clyde), Sandy Gimpel (Stunt Double - Jane), Mike Cassidy (Stunt Double - George)
The Mathnetters are in the midst of a wild caper when local grocery stores report being robbed -- first food, later money -- by a gorilla. In a major twist, Grunt the gorilla is reported missing from the zoo. Jane Rice-Burroughs, Grunt's best friend, claims that Grunt could never have robbed the stores, and fake gorilla tracks found in a pizzeria support her claim. When gorilla sightings are made in different places at the same time, Kate and George conclude that a man, Janos Prokedzion, committed the robberies in a gorilla suit using kidnapped Grunt as a scapegoat. However, while Prokedzion pretends to be Grunt at the zoo, Grunt, having really escaped from Janos, climbs the Hollywood Sign and puts the mistaken George in grave danger.

I revel in the satisfaction of absolute denouement when I discover the name to some vague concept that I have been pondering over for ages so yes, I totally am with you there! :-)

We used to watch that all the time.