So I've been stressed in life lately for many a reason BUT THEN I had a hard time falling asleep last night and finally fell asleep around 1am and then at a little before 4am wake up to the sound of GLASS BREAKING AND OUR ALARM GOING OFF!!! NEedless to say I freaked out like whoa. Dave jumped in front of the bedroom door to hold it closed while I called 911. Then the alarm people called and we told them that we thought someone was in the house.

Then...Dave decided he was going to check out the situation...and it turns out the christmass tree just fell down and some glass ornaments shattered setting off the glass breaking sound alarm.

The police arrived within minutes which was really a nice and somewhat shocking surprise. Like a few cop cars showed up and even after I said it was the tree that fell over , he offered to search the house if I wanted (which I did but I know Dave would have prolly killed me if I had the police search the house because the tree fell over). Anywho, we had to pick up and cleanup and surprisingly few ornaments broke.

But now I am terrified and it is too close to 7am when I get up so now I am just staying up so I guessl ike 2 hours of sleep is all I'm getting tonight. I ended up getting some work done (oh the joys of being able to work from home so any free moment feels like it should be spent doing work). But now I am really scared of the poltergeist I thought was inthe house. Dave said the tree was leaning and it is not the poltergeist but frankly I can totally belive that but in general it just makes way more terrified. Like I still feel like i am gonna turn a corner and there is going to be a ghost or a robber there.

Also, we were debating if the alarm makes us feel safer or more scared.I feel safer, like i felt good because I did feel if somoene was in the house they would have left because of the alarm. I also like that if I didn't' have my phone for some reason the alarm company would still call 911. But on the toher hand, we both heard the glass smash and that woke us up first followed a second later by the alarm screeching. We debated if we just heard the glass break we might have thought christmas tree and then go look and not freak out but the alarm makes you really freak out. BUUUT I tihnk i would have freaked out the same alarm or not but I don't know. I think I am pro keeping the alarm and the glass break sensor.

Overall I am glad for the sensor and the police response but I am terrified and may never sleep again. I really was always nervous the police don't actually show up in Buffalo. Especially now that i live in a little more sketch neighborhood. I know they would prolly respond in Elmwood Village but I wasn't sure over here but really they were here really fast and were really friendly even after finding out it was just two crazy gays and a christmas tree accident.

Or maybe your house is just leaning....

On the upside, I hope you find it reassuring to know the police will respond quickly. I'd keep the alarm, because it would be terrible if the next time was for real, and you found yourself helpless to do something about it. You'd really be hating on yourself knowing that you USED TO have an alarm system. Anyway, I am happy for you that this turned out to be nothing but a minor inconvenience.

IN honor of the US being in a relationship with Cuba again lets all listen to a little Celia...

we got our tree today ! I think decorating for xmas is my favorite thing! 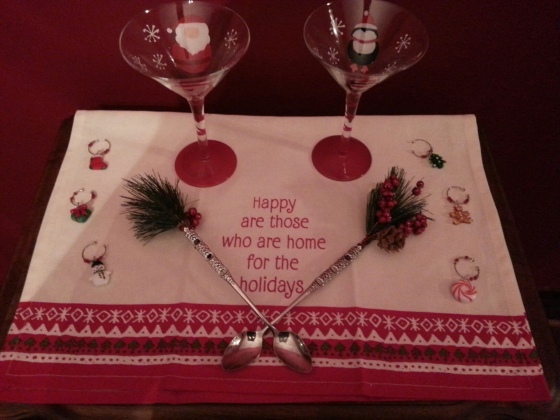 Or maybe you are home for the holidays but you are having the customary stress-fight of your life with your family and there is this smug tablecloth rubbed in your face. Oh! isn't this happy?

So wrong. So many levels.

So I don't really believe in ghosts though I also don't not believe in them. Anywho, some weirdo stuff has been going on in our new house. All taken separately , seem like no big deal but I swear more and more keeps happening and only to me and never to Dave. So here's what's happened.

1. There are always crazy noises like people walking around and doors opening and closing but I know old houses do that so that I could get over on its own.

2. At the top of the stairs is the guest room. I swear the door opens and closes. I have opened it and then when I went back up it was closed and I have pulled it closed so it latched and then went back up and it was open and noone else was home at the time. Again, this could happen,coudl be the wind or uneven door but really it doesn't always do it and for it to open when I closed it freaked me out.

3. I was in the shower and the radio that is on the back of the toilet that had been there for weeks randomly fell off the toilet while I was in the shower and smashed to the ground. Once again , seen alone I could say ok it could have been unever or smoetihng or the vent blew it off even though it had been there for weeks but with everythign else it started to freak me out.

4. Around a week ago, I was in the living room and dave was asleep and I got up to get a piece of candy and while I was walking back to the couch , the house frmo the computer and a magazine just fall off the coffee table. There was plenty of other stuff on there , even closer to the edge and nothing else fell off.

5. A few minutes after the couch thing, the tv randomly turns off while I am nowhere near the remote.

AND THEN THE FINALE

6. Last night I go up to bed and put my cell phone on my dresser as I do every night and while I am putting on my pagamas it falls off the dresser and smashes to the ground. I think "well maybe I put it on something and it was unever or soemthing." so I put my flashlight on and make sure to put it flat in the centerish of the dresser. AND THEN.... i lay in bed and after about a few minutes it crashes to the floor again. This is the same spot I put it every day and it never falls off and nothing else around it fell to the ground so it is not like it is slanted.

All in all this is starting to freak me out. Dave read something that sometimes the poltgergeist is really your own spirit or something that is giving you weird abilities to make things move. I kinda always wanted that since I was a kid. I used to sit for hours trying to get the tissue box to move, so if that is all it is mabye it is a good thing!!? On the other hand I cannot stand to go to sleep because I am terrified right now.

Yeah I'm way behind and catching up on some things and not to scare any one but it is possible something did happen there and something is trapped there , some old houses do shift and if the house isn't completely even that could make stuff fall.... Or maybe since You and your sis both had something happen maybe someone or something is trying to get in touch with you both ......

They probably are cat demons for realz.

I'm not bothered unless the poltergeist starts throwing things at us or breaking our things. We should also add that my sister in law also had two encounters while she was helping us move in. We'll see what happens when she comes next! Unfortunately Paul can't come cause of the cat ghosts :( I'm so sad that he can't come over but I'll definitely exorcise the cat demons, I just need a few more gallons of holy water.

I suggest you spend sometime with Paul.. or better yet, I think you should have Paul, Terry and Joe come over for a few days. Poltergeists always leave when they realize people have a support network. It's like a proven thing.