Does this scary mountain man robbing cabins in Utah look kinda like (e:terry)? 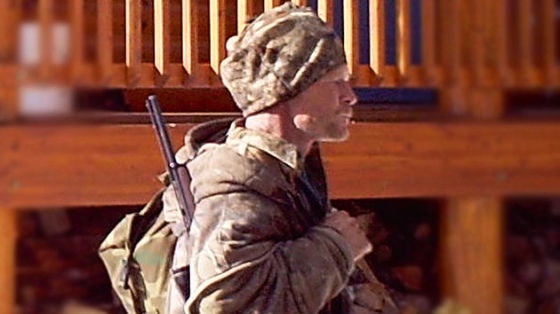 Oops I totally thought this was something I posted. Haha.

Haha who is he? I don't even remember where I saw this.

Prolly one of my hill cousins...

Yeah, I think that was the phase before the business took off.

Sorry to dissapoint because I'm sure you all just got really excited thinking I was posting homemade videos of me dancing...but alas I'm not BUT I WISH I WAS and that's what this is about. While looking up Ke$ha on Youtube I cam across this video and it looks so fun and then they have other ones too. They are the Boston Flag Football League which is like a gay (but they have straight people too) flag football league. But I guess they do music videos on the side not really clear how that works out except they must just be really fun people. So now I wanna make music videos with my friends, it looks so fun....whose in!?!

Seriously they look they are having so much fun!!! I love how serious some of them look trying to get the moves when they are doing the group parts.

Glee is not my favorite show and I have not watched it in a hot minute but tonight it was featuring none other than our favorite rich b**** Miss Nene Leakes from the Real Housewives of Atlanta and Ricky Martin of supersonic bilingual hispanic stardom. SO OF COURSE I WAS TUNING IN.....(ok actually I didn't realize this was tonight and Dave mentioned it when we were flipping the channels and we deicdd to watch it but BOY AM I GLAD I DID!)

ANywho, Glee is not what this post is about. While watching Ricky perform I'm Sexy and I Know It with the cast of Glee (which by the way I am soooo sick of this song, it is on everything!) anywho it reminded me of a 1998 Grammy performance when this happened....

This though was not only a rip roaring, raucus good time which went on to become one of my favorite songs of all time it is also my first distinct memory of being attracted to a guy that I can think of. I think I was a freshman in highschool or maybe a sophomore but I"m pretty sure freshman. ANywho, I saw this performance and immediately was in love with the music and a little bit the man...or maybe a lot bit...come on now, leather pants and dancing, who wouldn't be enamored. ANyway I really remember it because right after it aired I went online and ordered the cd because I really wanted it, I remember this because I don't think I had ever ordered anything online at this point in my life and I am actually wondering if maybe I really just reserved it online at a store to pick up because I can't imagine buying anything online in 1998 but I do remember having to wait for it to come so I must have....not exactly clear on the details. Anyway I remember the next day in school talking about how much I loved the song and had to order it right away and my friend Marissa told me at lunch that she had done the same thing and she was talking about how hot Ricky was and wow wow wowwee he was smoking and I remember thinking how I wanted to agree but could only talk about how much I liked the music but not the man.

I sitll listen to that, his last spanish language before he broke big in America album all the time, in fact whenver the weather gets nice I want to listen to it and put it in my car and was listening ot it last week when we had some nice days.

THe weird part about this or maybe not so weird part is I could totally in my mind at the time separate my love for Ricky Martin from the idea of liking men. ANd it's weird because believe it or not I really did not go through my highschool years like trying to hide who I was and like really wanting men but pretending it wasn't true. I really didn't realize or maybe didn't accept it but I definitely besides particulary this Ricky Martin moment did not feel like I was hiding or trying to prevent anything. There were definitely girls I thought I loved and maybe I knew somehting was a bit off but I really didn't realize it. I know people think I just was denying it but I really didn't realize it as far as I remember. Except for Ricky....oh sweet sweet ricky martin.

P.S. look at all the people in the Grammy audience, this is only like a little over 10 years ago and they are mostly all wearing like tuxes and fancy dresses, now they wear craziness and meat.

I know I agree but I so distinctly remember like ordering it in some way right after I saw it on tv and talking about waiting for it. Since I still have the same email address maybe I can go through my old emails and see if I have a receipt or something.

I remember when you got the Ricky cd. I think you were one of the first people I knew who had heard of him? Also, could you order things online in 1998??? After waiting through the busy signal to get on America Online and set up meetings between two random strangers...???

wow - I actually never heard that song in English. There are only a couple lines in English but it totally changes the timbre of the song... I don't know if I like it. Maybe its just my faulty memory or maybe I was TOO much into spanish metal in 98. I think it was the second. I thought ricky martin was such an antithesis to all my fav bands. simply didn't like him. He teeth were too white.

I had a similar feeling about the gay thing but not for ricky martin. I thought that I was just jealous of certain guys. It wasn't until into my 20s that I realized that I was not looking at hot guys because I was jealous but because they were nice to look at. It really did wonders for this jealously issue I thought I was having. Now when I look at hot guys instead of thinking, "I am jealous I want thay feature", I think, "I want to tap that."

That is pretty interesting. The thing that is kinda odd not about your story cause that really makes a lot of sense... Is how that kinda reflects or could in the show.... Puck is straight up football straight and he liked his teeth all the girls of course where into him and even arty was... Now maybe I miss read the show but they made it to me kinda imply or hint at arty and puck not I wouldn't go as far as being gay but finding him attractive....