So i just read that it is now legal to import chicken from China. Which whatever you think about that it is what it is BUT here is the super weird part. The chickens have be born and raised in the US or Canada and then can be shipped to China for processing and then shipped back. HOW CAN IT BE CHEAPER TO SHIP CHICKEN ACROSS THE PACIFIC AND BACK instead of just processing it here. If the whole process took place in china I could maybe see how it oculd be cheaper but really raised here and then shipped there defeathered and cut up and shipped back? NO WAY! It seems so crazy!

Also, the party is in two days and i still have no ideas for a costume. This makes me fear it is going to be another Troll like year, that was a terrible costume year, even I can admit that.....

....maybe seeing this will give me inspiration to kick my butt in gear... 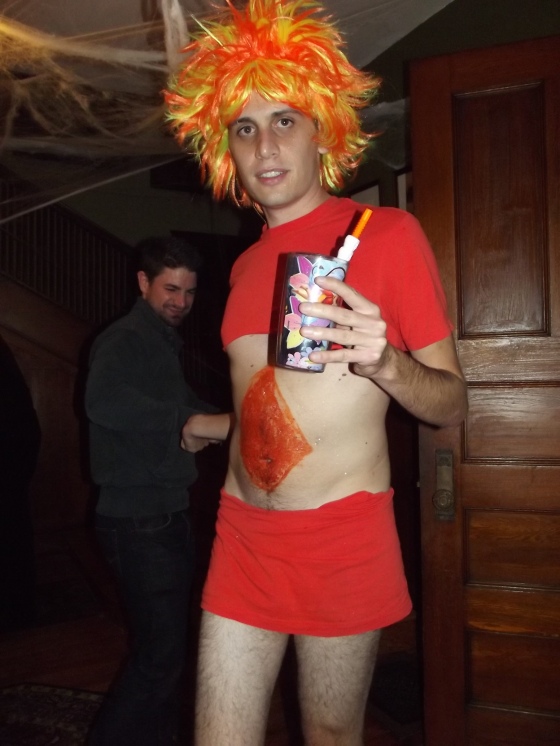 And the whole china chicken thing is disturbing... What can they do in China they can't happen here? Sounds sketch boo.

It better be good.

Well I just watched Carrie (the original version) with (e:libertad) tonight. Well let me tell you , it is the most depressing movie ever. It isn't really scary and like I can see why people say it is good but really it was just depressing. Everyone was so mean to her. AND THEN JUST AS things seem to be going so well for her and she and Tommy are so happy at the prom , why did they have to pour the pigs blood. If Tommy was in on it maybe it would have been a little less depressing somehow, just all around meannes. But he was actually being nice and so was the teacher and then they just die too! Poor Carrie, poor tommy, poor overly glamorized gym teacher! It was frankly just so depressing. I was hoping this time it would have a different ending and just end with her and tommy and sue being great finds and living happily ever after but it did NOT HAPPEN!

Also, I did find the end a little hilarious where the girl who survived's mom says to her friend on the phone "she will be ok, her doctor said she is young enough that she will forget" . UMMM she was a senior in highsschool and all her friends were killed in terrible ways in front of her? LIke there willl be noone left of her age in her town and then their neighbors house burned down into hell? Oh yeah she will prolly forget that in no time!

It's back to disney channel and hallmark for me , at least there is usually something uplifting at the end in those movies!

P.S. I have been meaning to write about my10 year estrip anniversary, it is comning soon

So this old lady who like loooves me at RiteAid who I have not seen since I started at IHA almost 3 yeARS AGO came in tonight. SHe totally freaked out when she saw me and was so excited and it was sooo cute. It was seriously cute and amazing, like she was soo excited! BUT at first she didn't belive it was me and she later said it was because I have "filled out". That is not what a boy who turned 30 wants to hear! Anywho it was still amaze seeing her, it is moments like that that make me realize I can never leave RiteAid. I love my seniors and they love me right back.

Side note I just realized this past September was my 10 year elmwoodstrip.com anniversary and I didn't even celebrate! Gotta do something to celebrate!

You're looking pretty full these days.

That is always my motto!

Remember - the less you wear, the easier it is to make a costume.

So I don't know why but every so often I really like to just pull up really sad movie clips or tv show clips on youtube and watch them and just cry and cry. Dave said that basically I am an emotional cutter but instead of cutting myself I watch sad clips and cry. I don't know. I just feel like every once in a wihle you need a good crying time cleanse. Speaking of which here are some sad clips. I guess if you haven't seen the movies before they might not seem sad on their own but they give me a good cry.

I have never watched Oprah all that much, but it you're American and own a tevelvision, you sort of have to know at least something about her. I think what you're doing is what she calls having an ugly cry. I think it's a good, healthy release. Keeps you in touch with your emotions and maybe trains you to control them. Just my opinion.

i love this fucking movie! WABACHA!

Hmm... I feel cheated. I guess our definitions of sad differ - even though I pretty much cry in buckets at certain clips.

So I stumbled upon this movie called Teeth on Logo tonight. It is about vagina dentata which if you dn't know what that is look it up. I must say this toothy in all the wrong places woman is hilarous! I think my favorite part is when she goes to her friend saying she has killed 2 people and has vagina dentata and needs to be destroyed he decides to seduce her becasue that is what you would do when someone tells you they have a second set of teeth. I recommend everyone check this crazy movie out!

My real question is why is this movie on the gay channel Logo? Is it propoganda to make more gays because they will be afraid of women?

I think because only gay people can watch it without having sympathy pains. Every time I've watched it all the straight guys ended up peacing out after the first "attack".

So today after shopping at the Galleria me and (e:libertad) decided to go to dinner at Fontana's which is an Italian restaurant in Lovejoy. For those of you who know Lovejoy or have been around Buffalo a while it is in the old Billy Ogden's location on William Street near Davey Street.Some people at work had said it was good and I thought that was a good time to go and I wanted to drive by the house my dad grew up in which is like only two blocks away from the restaurant.

So anywho, we were both really hungry. The waitress was really friendly. There weren't too many people there when we went (around 730pm) but there were a few other tables. They brought over some good crusty bread and pesto to dip it in. They have a good size menu and then they have a chalkboard with about 15-20 specials. We both got things off the specials board but right now they have this deal with all these meals that are like only 7.99 which seems like a really good deal but we didn't get those because we wanted specials.

We got fried calamari as an appetizer which was good but nothing too special in the fried calamari department. They were more bready than I like but they were good. For our meals, Dave got cajun chicken pasta and I got Sicilian Mac and Cheese (which was like rigatoni with 5 kinds of cheese and redsauce all mixed). Both are meals were really delicious and really big portions. The prices were really reasonable ( i think they were like 13.95 each) and the portions were really large. All the dinners also come with the salad bar. It is a limited amount of ingredients in the salad bar but it was still good. We both enjoyed our salads. We both ended up taking about half our meals home and we had no room for dessert.

Overall, I definitely would go back and definitely recommend it. It's a little bit out of the way and not really around where we are but if you are at the galleria it is only like a 8 minute drive away. You should give it a try!!

They should pay you for this free marketing...

So I went to Wendy's for lunch today and the drive thru line was really long so I decided to go in. I was standing behind this girl who I guess looked kinda boyish but not even really but maybe a little bit . Anywho the cashier said can I help you sir to the girl in front of me which is always an awkward thing when you do that but what made it all the worse by trying to save herself by after saying "can I help you sir" then realized it was a girl then said "or whatever you are"....wow that was not a good save. the girl looked embarassed, i felt awkward, the whole thing was bad.

Weird. A cashier at Wendy's called (e:Dianne) "sir" yesterday and was obnoxious about his mistake.