So we had a deal for a year on Timewarner cable and internet where it was $90 a month total for the cable and internet. That ran out this month and the bill went up to $144 a month. That is way too much in my opinion and I looked it up and directtv is like 39.99 for the same cable package per month but that doesn't include internet. Plus timewarner currently has deals for like $90 for it all for new customers. So I called hoping they would give me a deal.

Well the first guy was like oh yeah I think I can really help you out. And his first offer was $180 but included a home phone. So that would be $90 extra for a home phone I don't need but somehow he was trying to convnice me I was saving $36. Then I tried to see if there were no home phone packages and he said the best he could do was like $135. So then I said I wanted to know how much it would be for just my internet and he was like we have a great deal that is like $80 but you get double the internet speed you had before. And i was like ok well as I said I just want the internet I have now ( he has already asked and i had already told himI have no interest in faster internet) So he finally told me it would be just $55 for just internet but had to transfer me to someone else to downgrade my service and get rid of cable.

So I talk to the downgrading specialist who says he has a great deal that the other guy must have missed that keeps my rates the same as tehy are now. So I said the same like the will still be $90. And he said no they would be $117 but you get all the saem stuff. So that is not the same rate? It made me feel so crazy. How can you say I have a dealt hat is the same rate that just isn't the same rate but is instead like over $20 more. It is just ridiculous! So I was like that is the best youc an do and mentioned direct tv and stuff and he said that was the best so I said I just want to cancel my cable.....and they told me it will shut off 9/19.

Well I really don't know if I can live without cable and now I am starting to freak out but I really didn't want these jerks to have my business. they are so scammy with their like different plans that all are random and shady ways of explaining them. Ugh, and i really have few option because there is no fios in the city. And there is the possibiltiy of direct tv but that is a satellite I think so my landlords would probably have to agree to allow that. I don't know, I am just so aggravated with the scamines of the virtual monopoly that is Time Warner...

...but if you know me I lvoe my tv and can't imagine like without it. What will I talk aboutr?>

i think you need to ask for the satellite... i can't stand people like this either or companies rather. and i agree, you will be an empty soul without tv.

Just to let you know here is what will Happen. But just my opinion you will get some deal from Direct TV... Or Maybe even Dish (no AMC so argh) and I think currently people who switch from cable when you give them you cancel notice you get the NFL Package for free... But industry wide all the deals are for new customers only... So Yes If one wants every year or what ever you can change companies... Here is the thing about bundling yes you can save some money by changing your carrier however.. That is what Ever cable/Dish company wants you to do (Direct TV i think has a deal with Verizon where there is no Viso or what ever)... This gives them more power to not give into what stations want. Granted things have been worked out but when we almost lost fox around here.. It is one thing to change to a new provider but when phone and internet are tied in you really can't... Also just to let you know I don't have direct TV (love their ads though) but they all kinds of different packages and some are even sold through different places...

On a Personal Note ... I think all this favoritism over new customers vs. keeping the ones they have sucks.. But I like my indemand stuff.. That being said Based on the ads my DVR isn't as good as theirs so... I also don't have to worry about green leafs on tall trees messing up the signal so.....

Ya they are so scammy. You definitely don't want any other brand of internet in the city like DSL or anything. Its terrible. They know they so they have us stuck. I can't figure out why verizon can't do fios in the city. It would allow for some competition that might reduce the price for consumers. I heard one story that its because they can't move into a city without covering the whole thing as some sort of fair internet law and their wouldn't be enough customer throughout the city. On the other hand I heard Time warner threated to move out of buffalo if the city let Verizon in. Who knows what the true story is but either way it sucks to have a total monopoly. I wish we had won the google fiber thing :::link:::

Keep em for internet, and get direct for tv, you can do both

If I had a bike that looked like this I would probably ride it all time. 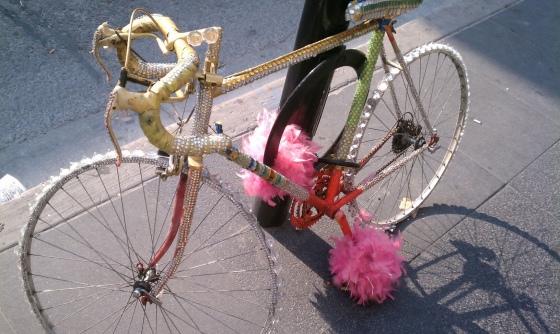 me too except it's so hilly where i live i would run off the road and fall in a cactus covered wash... at least they might spot the sparkle in order to rescue me...

While in Toronto I think you said you wish Buffalo had something like this and now it does...

me and (e:jill) and jim tried this tonight. It was delicious!

So this weekend I turned the big 29...that's right I am one year (now a few days short of one year) from being the big 3-0! So by this time next year I am going to be at my peak fitness in every way. Anyway this post is about this year.

So I took Friday off of work to go to Toronto with (e:libertand), (e:paul) and (e:terry). I slept in, woke up and read the paper and dawdled around the house. Then Dave got home from work and I opened my presents from him. My real present was the trip but I did get candies and a magazine and a great card and I loved it. Then we went to leave for Toronto suprisingly close to our 12:30 planned leaving time except then we decided we should eat first.

We went to Ashkar juice bar on elmwood and I had a tuna wrap which was pretty delicious and it came with a salad with beans it and that was pretty good too. Except theyput onion in it even though I said no onion but it was actually good but I just wasn't in an oniony mood. So after lunch we had to go back to my apartment because we forgot some things. And then we were finally off. Crossing the brdige on the way there was pretty easy breezy lemon squeezy. I get so nervous about bridge crossings and all the questions but it really wasn't bad. I always get nervous and have in the past said things like:

-I don't know if the other people in my car carry weapons
-yeah I have drugs..but they're just antibiotics, do those count and other ridiculous things

Anywho so then we were on our way to Toronto , traffic wasn't too bad, in the direction leaving Toronto it was super backed up I swear for like the whole ride traffic in the opposite direction was terrible. I was getting nervouse there was a zombie attack or something in Toronto and everyone was fleeing just as we were entering. Turns out that was not the case.

So we get to our hotel and check in and it was quite nice. We then left to go to a game store so Terry could get some games. There were about 100 cats in the tiny game store so me , paul and dave waited outside. Of course I got drawn into the souvenir shop next door but actuallyonly Paul ended up buying anything. He got a racoon tail which he proceded to wear for the rest of the trip.

Our waitress was super nice and awesome and friendly but she did not want us to leave for some reason. Like seriously we could not get the bill. It took forever.

After dinner we decided to go to Remingtons which is a strip club. Um it was sad. I don't know if it was just this one because I have never been to one before but really it just seems sad. The customers seem sad , the dancers seem sad, it all seems sad. Maybe if it was more party atmosphere but it definitely wasn't while we were there and I could not wait to leave!

We went back to the hotel and freshened up and then we headed out for the night and that will be part 2 because I am tired of typing right now.

Did you know I am an avid reader of your
blog for probay almost a decade now? Well I am, and I am ready for part 2. A few things... The bathrooms are in the basement because nig cities have less space on each floor so they make the restaurant as big as they can and then use the basement space for restrooms and storage and such. Also, love the part about Paul and the rat tail... Seems true to form on his part. I also feel like most strip clubs are probably sad when I picture them beig fun like in rap videos... My dream is to show up and make it rain on them hoes... I need a bachelorette which would require dating a bf an then fiancÃ© in that order... And then we can have fun not sad strip club times!