So I just signed up for the corporate challenge which is a 3.5 mile walk/run. I really would like to be able to run the whole thing but honestly I can currently run about 25 feet before getting winded. That leaves me with only 1 month to really get in shape for this thing! oh and I'm lazy so that kinda makes it harder....I can always walk , I registered as a runner with some walking breaks but I'd really like to run it! Plus they are hardcore, it says like if I try to cheat and take a shortcut , not only am I disqualified but so is my whole company forever. That seemed a little harsh but really who tries to cheat at these things?

I think Nichols does this. My knee hurts too much to try to the run the whole thing. Maybe we could do it together, or do you have to walk with your work friends???

No That is a really Huge deal for companies.... It is really competitive.... Plus I think there are a lot of sponsors guessing some big and some small ... I'm never done it but guessing there might be some big winnings to... I think it is one of those where the do team time so one slow person and argh..... I trick with running is when you feel winded you have to keep going... That winded means you aren't in shape... Or if you can only go for 20 sec. Go all out... Then when you see how far you go drop two objects on the ground if that helps and do wind sprints... If you get to tired stop... Next day do the same amount and shorten the breaks in between.... As an example... Sprinting and long distance isn't the same thing but you need to get that heart going and slowly get into shape...

Well Dave and I finally made it to Cantina Loco last night and it was super delishy! I'm not like a super Mexican food fan, like I like it but could live without it probably but do like it sometimes so I wasn't sure if I would have the same love as everyone else. ALso, Cilantro tastes like soap to me and ruins everything it is in which seemed like a lot of things on the menu but they seemed to be able to leave it out of things if you ask. At least the nachos they did. We started with the nachos locos or something like that minus the cilantro and they were soo tasty. Super yum! WEll actually we started with a pitcher of margaritas which will lead to what happened towards the end of the night. So we had margaritas and nachos and then we each got the Korean taco which was soooo good. I seriously could eat 10 million of those! It was like 1 of the most delicious things I have ever eaten in my life. Then Dave also got like a steak taco I believe which he said was good and I got the special which was a mushroom and spinach enchilada. That I didn't love. It was ok but I really should have went with something else. I didn't hate it I just didn't love it like I did everything else we ate.

And of course to make the night even better we saw (e:flacidness), he wasn't our waiter but he stopped by and even got us shots of tequila in the end which were actually kinda good. I am not a big fan of tequila shots usually but these were pretty good. I think I have been kind of afraid of them ever since (e:paul) live in his apartment on Linwood and the people in the front of the house were having a party and I did a tequila shot and basically threw up automatcilally, like ran out the door threw up off their porch the second after I took it immediately. BUt alas this one did not produce that effect. But after the pitcher of margaritas and the shot I was kinda typsy I suppose you could say.

SOOO We walk out the door and I didn't realize there was a step and I fell to the ground and my ankle hurt so bad. It still hurts today but not as bad so I'm thinking it will be fine but last night it hurt so much, well not too much that I couldn't go to Fugazi for a little more haning out and another drink but still a real lot! I came home after that and iced it and it feels ok this morning but when I walk it kinda hurts. Luckily, I don't tihnk anyone saw me fall to the ground. I mean the outside of the restaurant is all windows so it is possible but I don't know , I don't think they did for some reason so that's good.

All in all a painful in the end but good trip. I will definitely go back and recommend you do too!

I love you Micheal... You are so funny!!

Great Place.... But one thing Bothers me about the place and it isn't a bad thing.... No one that has gone yet on this site including my self has posted any food pix.... So for that I'm sorry (didn't have the camera).... Also Sorry for not going back Yet.... Love the pitcher of Margarita Idea.... But me being one person it might not be a good idea..... Wonder if anyone just orders that as their dinner :)

Question the Nachos where they or are they Regular Nachos or are they loaded with like beef and cheese and salsa ?

Another thing I ponder if I was by myself and ordered a Pitcher would any sweet young things come over and offer to help me drink all of it...HA....

You fell?!?! How did I miss that when I said bye to you guys at the door? I'm glad you aren't seriously injured. It was really nice seeing you two, im glad you enjoyed it.

Holla for a Dolla

You know what I realized yesterday at work that amazes me. Fundraiser candy bars from like Niagara Chocolates and Fowlers still only cost $1. They cost $1 when I was out hawking them on the streets in like 1989 and they still cost $1 today. HOw could that be? Are the groups making less per candy bar? Maybe the candy bars are smaller but they seem about the same to me. IT just seems crazy. LIke a snicker bars or three musketeers at the store has went from like .40 when I was a kid to 1.00 or more now at stores so how could the good old delicious Caramel or Peanut Butter or Crisped Rice bars being sold to fund everything from class trips to new hospital wings still be $1. I just find this incredibly crazy and interesting...but I like it!! 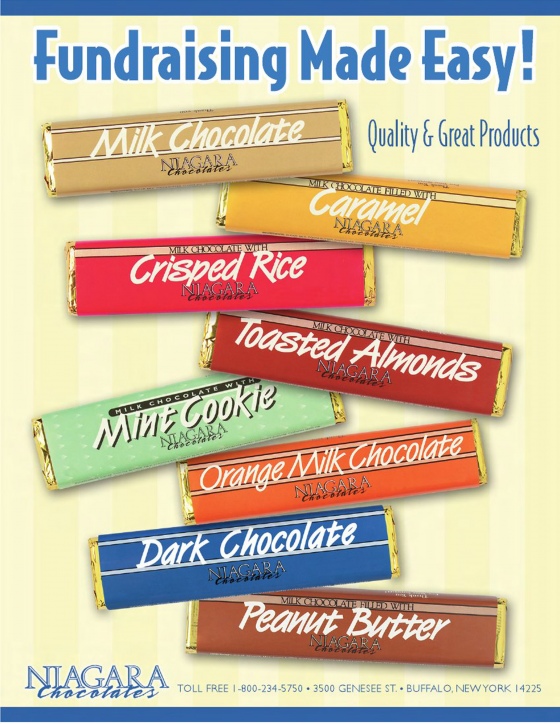 it's been 5 more years now and they are still $1

Higher Prices on other candy they sell..... Yes they are made locally ..... Some brands have gone smaller and some bars are $2 but Niagara is a buck... Maybe lots of temp workers or maybe their pay hasn't gone up.... Thinking though that a lot of it has to do with the charity thing? Also the even dollar thing---> no change.... If they doubled in price no one would buy them?

I love those candy bars.... I used to get so excited whenever they came around. When I had to sell them I would end up just eating most of them myself and paying for them...

They are now made in China?