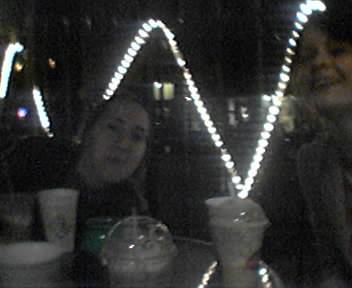 Seeing me at Spot

Hey (e:boxerboi), craziness that I am at Spot so much that it is noticeable. I heard that you hated me though for stealing your seat...hope I can make amends.

I heard about the crazy estrippers naked party night from Beast and Paul. Sorry and not so sorry I missed it as I'm not sure you can go for blood tests in the morning after a night of drinking (does fasting include alcohoo? who knows!)Which by the way I went to a new blood test place on Hertel and they treat people way different I think then the one on Maple in Amherst, totally cuz I think they expect you to be poor at the Hertel and not to be at the Maple one. More on this later..

Silly Shakespeare, Parks are for Kids

Before I get into our Shakespeare in the Park outing I'd like to say I love the new AIM feature and also was so behind in reading jouranls I was so overwhelmed and before I even got to the top ten list as I was like 20 new entry readings behind, the top ten list changed drastically again. So many updates to read...so little time.

So tonight we planned to have a picnic before Shakespeare in the park. Instead we got there after the play had started (the only way we go anywhere is late) and sat in the back where I could not see the actors at all making it more of a audio play for me and thus leading me to have no clue what was going on at any moment in the entire first act. But I did enjoy eating the fruit salad, pasta salad (30 lb tub of it...everything that comes out of Jill's kitchen is large enough for an army), PB &J sandwiches, vegetables, pie , whiop cream and random snack foods. MK's dad is in the play and he was aweseome although I'm not sure of what his character's name nor role in the play was but it was good none the less. We left just as the second act started b/c it started to downpour but poor MK stayed alone to watch her dad, although I would imagine they stopped performing after a few minutes of downpour. I hope she survived, although she did have my cape/blanket for protection, which hopefully helped.


On a funny note, I was sitting about a few feet away from Diana and she looked bored so I started to wave to her in a like kinda crazy funny fake seductive kind of way and their was like a 20something year old guy standing behind her who thought I was waving to him and looked at me and waved back in a "who is this crazy person waving to me , I better appease them" kind of way wave. I love to embarass myself 24/7!!!

I think we are going to be at the midi prom tomorrow night so hopefully I'll see some of you there , we are also probably going to Off the Wall for 80's night which is mucho fun and I recommend everyone go to that too!

First off , Welcome to Drchlorine, Jeremy and Maureen. Maureen, I hope the online journal thing ends up better then you expect. I never really thought about it as like a real journal and so maybe that is why I don't see the problem. Like it is not the same as keeping a private journal, they both have different purposes.

Also, I think I may want to get season tickets to Shea's this season. I want to see most of the things such as the Producers, Chicago, Lion King and I forget what the other one is. Anyone else interested?

P.S. I'm still trying to find out about where they have dodgeball leagues around here, we have lots of people who want to do it now (thanks rachel, lilho, floppydonkey, jill, terry and everyone else who said they want to) does anyone else know where we can play?