So on saturday I went to zoar valley with (e:libertad), (e:paul), (e:terry), (e:matthew) and (e:james) and had a good time all in all despite i have a general hatred of nature and walmart and I had to be around both. But rafting was super fuN! Anywho so I realized how bad i eat when here is what i had for the day

Breakfast: skipped it
Lunch: cheese sandwich with mustard
Hiking Snacks: lots and lots of cheetos and some mike's hard lemonade

Yup the majority of my food on saturday was french fries and the various accompnaying cheeses! I LOVED IT!

French Fries are great. Some times if they are made the right way you can have them 3 times and they all taste different, sounds like a good day to me.

One word. Yikes. Or maybe it should be: Fries?

thats so gross. i think i would throw up, and also be extremely overweight, which makes me hate you a lil bit.

My Third Result On Google

I think that plus the lack of a teaching degree. You know what though. It doesn't stop you from being a pharmacist!

HAHAHA I remember that video. You are so klassy!!!

im just hoping my online identity will fade into the cracks by the time i graduate which is really never.

James had to remove a couple naughty things from (e:strip) when he was in teacher school.

Maybe I should buy a house?

I decided to buy my credit score from myfico.com today and was quite impressed with it. I mean i have never really had any strife in my life and so i have never had to go into debt so that helped a lot. I am also really quite anal about paying everything on time and not having balances. I also just got my interest rate reduced by a percent on my student loans for paying on time for like 5 years in a row or something which was exciting. My dad also made me get a credit card at like 17 to start building credit which I think was a good thing cuz they say longevity counts. So if only i had any money now would be the time to buy a house and get a good mortgage rate right? cuz who knows what will happen to my score in the future!

Ya, you and (e:enknot) could go halvsies

Nonna's would be a good starter house.

So me and (e:Mk) were in Target the other day before we went to see the Hangover (which was hilar by the way). ANyway so i used to collect these little Miss and Mr books which never really took off here but were bigger in europe. ANywho they are starting to take off here and have like a tv show and toys and stuff now. And thye had this Miss Chatterbox that when you press her special spot she talked. But the weird part was she talked in French so we read the whole box which was all in english and it said nothing about French and all the other ones spoke in english. It must have been totally a mistake liek that was supposed to go down the conveyor belt to the France box but ended up in the Buffalo Target box by mistake. It was more entertaining than it sounds now that I am writ5ing this. But it was relaly strange!

totally unrelated...my favorite clip from my favorite yet scariest movie of all time

Great, now Carol Channing is going to haunt my nightmares.

That's right it's (e:libertads) birthday! HAPPY BIRTHDAY! I hope this year is the best one yet for you, for us, for everything! I couldn't ask for anyone better!!!!!!!! 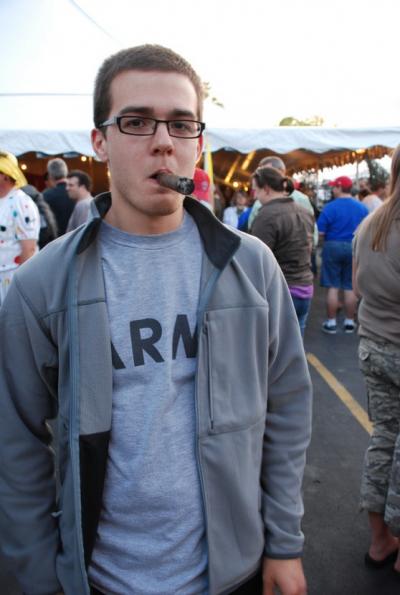 Look even Buffawhat is celebrating your birthday by having a big ol' cigar!

Have an AWESOME AWESOME SUPER-WONDERFUL year ahead, Dave!!!

wait... so this means Saturday's party is your birthday party? This changes everything.

Have a wonderful day, Dave!!

Have a Happy Birfday, (e:Libertad)!

Dave, hope it is a great one!

I don't love Jimmy Fallon but he had Zach Morris, yes thats right you read that right, Zach Morris (not mark paul gosseler) on his show the other night and it was amazingly amazing fantastic. It ends with a rendition of Friends Forever with the Roots! it is so awesome!!!!!!!!!!!!!!!!!!!!!!!!!! Watch it!

i agree, pretty much amazing!

I couldn't agree with you more, both about not being a big fan of Jimmy Fallon and how awesome that segment was.

So i wish i had a picture but i don't right now and want to write about it. So I saw in a like buffalo magazine thing an ad for Citylove which is a tshirt store that makes tshirts based on things in Buffalo (not like the I HEART BUFFALO HOCKEY ONES) , i like these better. Anyway so I saw that they had a tshirt of the mural of the lion on the side of some building on Delaware downtown sorta near Allen. I have always loved that mural and it is kinda fading away and in some parts the brick is exposed again. (e:libertad) gave me an awesome picture of it for my birthdya this year. ANywho, so today me and (e:jill) went to citylove to see what it really looked like cuz I didn't love the colors in the picture. But so we went and I saw it and i really liked the colors and how it looked in person and so I bought it.

But it gets better so the guy who was like about my age told us the story of the tshirt which made it even more interesting. He said like he doesn't design most of the shirts but he designed that one cuz he thought it was interesting and its cool becasue where in the mural the paint is missing he filled it in with "wake the lion" and he said how symbolizes like buffalo's rebirth and then like it ties in with Mckinley being shot and how people said buffalo was cursed since then because I guess that mural is based on the Mckinley monument lions. So anyway so he made this shirt which i love and then i guess the guy who painted the mural called him cuz he liked it and i guess that guy is now the head designer for the sabres and creates their logos and stuff.

So all in all I love my new shirt, will post a pic soon hopefully and i really like the citylove store and its owner seems nice so you should shop there, though they don't have lots of stuff , but i liked it. (e:jill) saw a shirt she was gonna get her sister too prolly. Maybe I will wear my shirt Sunday, though it is dark and so that might be too hot. We'll see!!!

i like this story very much peach. im kinda jealous too, because i don't have any special mural story, and now i feel more plain and less unique than you, which i feel i probably really am.