I just cannot get enough of this song:

I don't understand the cowboy.

What I Did for a Melamine Folding Table

So me and (e:libertad) wanted a folding table for laundry/craft room . (though to be honest should you really fold laundry in a room filled with glitter?) Anywho we found the table we wanted on staples.com and it was on sale for like $55 with free shipping. That seems like an easy transaction right........WRONG!!!!

Here is the whole sordid tale from initial delivery date of December 11th to January 2nd with a lot of yelling and craziness in between... I warn you its long and I tell it better in person but I wanted this documented so I never forget to never order from Staples again.

So we order the table and the delivery email they send me says it is being shipped on Dec. 11. I didn't think that meant it would come to my house on 12/11 but it did. I wasn't home and they didn't leave it......now you see they don't use FedEx or UPS or USPS they use their own service which it turns I think is nothing mroe than a few men and a wheelbarrel.....anywhoser so I wasn't home on 12/11 and so they left the little taggy thing I could leave on the door but then I got a phone message saying I wasn't home so it wouldn't be delivered until 12/19.....

12/19 was fine , I was in no rush for the table but then instead they came again on fri 12/12 , well I wasn't home again and hadn't left the tag out since they said they weren't coming until 12/19 and we heard our nieghbors (who have since moved) steal packages so i didn't really want to advertise for a week that a package was coming. So I got another call friday night saying since i wasn't home it won't be delivered until 12/19. Once again that was fine.............but no...theycome to deliver again on monday 12/15...well of course I wasn't home and had not left the tag because they had said 12/19.

To make it worse then I get a call on monday 12/15 at night saying since I wasn't home my order was being returned to the warehouse. So i called and some lady answered and said she would check into it but the delivery service was close and she would call me back the next day....well she was the first of many staples employees who never called me back...she didn't call me tuesday and then wednesday I did the online chat with them so at least I would have a record.

Now Wed 12/17 on an online chat tey apologized for all the confusion and gave me a $10 refund and said the table would be there Friday 12/19 for sure. ....12/19 comes and there is no table! So i do the online chat again on Friday night and they tell me they don't know what happened but it looks like the table got on the wrong truck but it will defintiely be there by monday 12/22. Now mind you it was like 9pm on Friday night that night and I asked so it is coming on monday and he kept saying by Monday and I asked if they deliver on the weekend and he kept saying no so I wasl ike so it is coming on MOnday and he would not say that, he only kept saying by Monday but not on the weekend which leaves only Monday.....

...anywho Monday 12/22 comes and still no table....Tuesday 12/23 I do the online chat again and they tell me they have no idea what has happened and they can't figure it out but they will give me another $10 off and it will be there 12/24. Instead of $10 off , they send me a $10 coupon for another purchase , I insist that is not the same thing and i get in an argument with the guy that $10 off a future purchase is not the same thing as $10 of my current table. Plus I was like um i am never making a future purchase but I want my $10 now. They couldn't do it on the online chat and said I had to call an dtalk to a supervisor. So I call and talk to a supervisor and tell her my whole story and she gives me the $10 and apologizes and tells me it will be there maybe 12/24 but if not 12/26 (even though the previous person insisted there is no reason it would be there 12/24)...

...well no table 12/24, 12/26, or Monday 12/29... So I call Monday night and talk to someone named Liza and she goes through this whole thing and apologizes and is like no I have idea what happened, looks like the wrong box waso n the wrong truck or something but it is definitely coming Tuesday 12/30 and they will call the delivery service in the mroning to ensure it and if it isn't coming for any reason the supervisor Mandy will call me .....well not call on Tuesday and no table

OOOOH Mind you I have had the stupid tag saying they can leave on the porch taped to my door since 12/18 at this point.

So Tuesday night I call and I really kinda lose it at that point. I get ahold of a supervisor named Bonnie oh and I was calling from work and kinda screaming which is not super classy but it was funny becasue after that everyoen at work was very invested in my table and me getting my table.....so Bonnie the supervisor said she had to check and would call me back. I refused to hang up because I told her I did not believe she would actually call me back...she emailed me her info and so once i had that I said fine she could call me back

She called me back a little later and said she called the delivery service and they weren't there but she woudl ensure it came the next day and she also was off the next day 12/31 and her offie was closed but she gave me the extension for another supervisor who would be there and I coudl call in the mroning and ensure it was coming..Bonnie actually seemed like the first person who was even somewhat helpful. Then an hour later I get a call saying my order has been cancelled and refunded!! I WAS LIEK WHAT THE F but wanted to call the next day when the person who knew my story was there.

....12/31 I call the number Bonnie gave me and it just rings and rings and rings. I was at work so I just let it ring for like a half hour and finally someone picks up and is "Hi this is jamie who are you trying to reach, this phone has been ringing for a half hour. I explained my whole story and said I was [planning on letting it ring for days if that's what it took for someone to answer." Anyway Jamie explained noone was in the office as it was closed and she just happened to be there and answeredt the phone but no one named Gila the name of the supervisor I was given was there......

AT THIS POINT I FREAK THE F OUT. I CALL the regular customer service line (oh and remeber i am at work now ) and noone has ever heard of Gila or BOnnie even though I have bonnie's email address and extension. I FLIP THE F OUT AND START SCREAMING in the middle of my office "IS THERE EVER A TABLE! WAS THERE EVER A FREAKIN TABLE< WHO ARE YOU PEOPLE" DO YOU EVEN DELIVER TABLES! and so on an dso forth. I guess like the vice president in his office across the office could hear me but eveyrone found it hilarious I think.

The new supervisor Vicki says she can'treally do anythign because my order was cancelled by Raymond but he didn't leave any notes as to why. She then said they had treid to deliver it like a hundred times but I was never home. I lost it again and basicallys creamed "I HAVE HAD THE STUPID FLIER SAYING YOU CAN LEAVE ITON MY DOOR FOR 12 DAYS STRAIGHT AT THIS POINT!!!". She said she could place the order again and i said fine but I want it at the price i got it minus the $20 I had been refunded so far. She said she would charge the full price but it was the same thing because I already had been refunded $10 twice and when they cnacled my order they refunded the full price of the table. I said fine .....I hung up....got the invoice from them and that is not what happened at all. The table was now costing me $10 more than original and was now 20 days after the original delivery date.

I coudl nto handle calling another person at Staples. I even googled the warehouse with at my parents on NYE and we discussed a plan of like raiding the warefhouse and liberating my table but in the end I wrote Bonnie an email since I had her contact info explaining the whole thing.

She wrote back the next day and apologized profusely and said she doesn't know why the other supervisor was there and said my table woudl come 1/2 for sure and she refunded me the full price of the table and gave me a $20 voucher for the future for staples. I wrote back and said I wouldn't thank her until the table was actually in my physical possession.

ON 1/2 I FINALLY GOT MY TABLE AND I LOVE IT AND NOW IT WAS FREE SO THAT WAS NICE!

BOnnie was really the only competent person at Staples. I sent an email to her supervisor telling her my whole story and that Bonnie was the only good employee they had in the whole company and she should be grateful to have her.

SO now I actually have like $40 in staples vouchers in addition to the free table but really stil never ever want to order from there again. Except I kinda wanna order like a pencil a day just to make them deliver it....

I know you are thinking, why didn't you just canncel the ordero n like day 10 and save yourself the time and frustration but by then it seemed like it was more about the principal > I wanted them to give me the table i watned. I didn't want to have to have went through like half of that and then still have to go buy a mroe expensive table elsewhere. And in the end I won...welle xcept it probably was about 5 hours of time at least total in talking to staples Customer Serviceless line. I still feel like I won!

Oh man - I wish you had actually done a youtube video narrating this! I miss your wild stories.

I feel like you need to take this to daytime tv.

I have a glitter drawer! nothing makes me happier than a drawer full of glitter 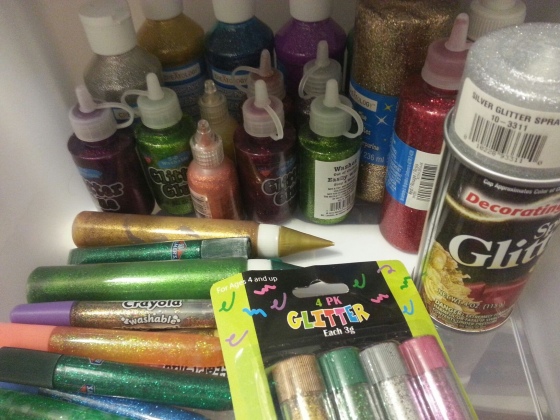 that's totally true! I think I actually thought I had more glitter when it was all over the place, putting it all in one place makes me realize I need more!

I'm getting the feeling you always had a glitter drawer's worth of glitter, you are just seeing your full glitter horde in one place for the first time.