I heard of a raspberry truffle martini....and now I must find and enjoy one!

(e:dragonlady7) just put something together that could be described as a raspberry truffle Martini:
- raspberry vodka
- creme de cacao

I didn't have any, but she said it was good. You would probably have just as much success with:
- chocolate vodka
- creme de framboise

Drive Me Crazy starring Melissa Joan Hart is seriously one of the best movies ever! I never mention it when talking of my favorite movies but I always watch it on tv and love every minute of it!

I totally agree with you! This is one of my (many) guilty pleasures. LOVE LOVE LOVE this movie. Love Melissa!!!I watch it whenever it is on tv--and its seems that the station usually plays it back to back or more- and I will keep on watching it. haha and I have the DVD. whatever, I am proud of it.

This physics class is kicking my butt. Luckily it is the only class I am taking and people are being helpful here and there. I seriously just don't get it. I am a smart person, I should be able to get it. I am also always exhausted wtih being at work or school or in the process of getting to one or the other from like 8am until 930pm everyday. And I just agreed to go to work at 730 on wednesdays from now on and tomorrow and maybe some other fridays. I feel like i have no time.

I am also debating rejoining a gym now. I don't know when I would go cuz I am beat when I get home but I would like to be fit. I was relaly much happier for the month or two last year when I was part of a gym.


and brr it's cold outside

Wowser, my big brother is 30. How crazy! IT seems like just yesterday you were holding me down with your friends and tickling me to death....oh wait that was yesterday!! 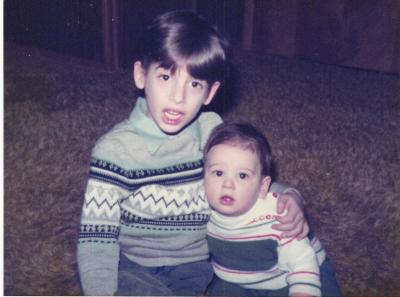 I love this picture for some reason. What are we both seeing that we seem so mystified and scared by? Happy Birthday Big Brother!

That is the cutest pic!

I bet it is one of Dad's 1,2,3 ... pictures where they is about a minute delay before the picture is taken. That is the face I often end up having for those, lol.

It is weird, like I always think like the people who are on (e:strip) now are the ones who have always been here. But really it has changed a lot and there are always regulars but lots of the people change. I thought of this cuz both (e:chris) and (e:boxerboi) posted today and both have not posted in a long time. They as long as other people have went along the wayside over the years like stickboy, drchlorine, alison and others. It is weird, that you just forget...

I have never watched the OC before but for some reason (e:paul) has become enamored with it recently and so I watched it with him last night. It was quite entertaining. I know there are only a few episodes left until it is cancelled but I think I will watch them. It was funny and fun. It also gave me my favorite line ever to use from now on. If you say Aurevoir Peaches with a thick french accent it sounds like something else and sounds great. Its funny cuz it sounds so mean but is actually something really nice, you are calling someone a peach which is nice. so I'll see ya'll tonight and you can hear it in person , but for now

Yeah I admit I like The O.C. and watch it every week. But I'm not a die hard fan who has every episode on tape and all the DVDs. I will also admit that I used to also watch 90210 weekly then lost the show and watched either the last season or the last 2 seasons of it. I find it it kinda ironic the Rachel Bilson (I belive that is her name and spelling) plays a girl named Summer and that Taylor is played buy someone named Autum but that is just me.

If I got a small SUV like the Toyota RAV4. Ok, i prolly won't get one but I think it would be fun to have one. I wish they were better on gas, though they are better than my old hunker of a car. I know I prolly won't want one but lately I just feel like getting a small SUV. I won't though, i'm sure I will just get some car.

Today was my first day of being back in school. I 'll update more on that later.

Yeah, it is. If you want something like that, Ford's tine SUB the Escape - comes in hybrid form

Music, Movies and Me

Went to the cheesecake factory the other day with (e:maureen).It was pretty good but not worth the 2 hour and 15 minute wait. There was some like lady rock/Sheryll Crowish version remix of Enjoy the Silence by Depeche Mode. It was so random to hear that while waiting at the cheesecake factory (by the wya we had to wait 20 more minutes than we were quoted). Anywho, that song made me think I haven't bought a cd in a while. And now you may be thinking , well noone does, we all download our music. But you see I haven't even done that. It is like music left my life. I still listen to the radio a lot and my cds and songs that I like but nothing has made me want to make the effort to go buy the cd or even enough effort to download the song. Not sure why....
.

...onto the Golden Globes. I love award shows , particularly the Golden Globes and OScars. I watched them with (e:jill) and they were pretty good but the after show was AMAZING. E! totally is pure crappy goodness. LIke the one Julianne Depandy I think, she was interviewing the winners after the show and she was defienetly getting drunk. Her entire interview with Alec Bladwin was about his hiar, and Merryl Streetp was competly about how cute her thank you list was. She then proceded to knock over the table holding Helen Mirren's Globes. Seriusly every commercial break they showed her like walking back to the bar.

The camerawork was kinda shotty too. THye kept cutting people out in mid interview but going nowhere like to a blank wall or hallway. And the "celebrititeis" they had consisted of people like Lance Bass and some random girl and Daryl Hanah. It was hilar. The other host guy was definetely high on some drug. It was so funny.

I tihnk the best line was the girl from hero when someone asked her what is it like to be at the Golden Globes and haveing everyone see you and take your picture and she responded "Maybe you didn't know, but I was at the Teen Choice Awards"....AS IF THEY ARE THE SAME THING!!!

and the girl was like "um i didn't know that people didn't want me for that role. I had no idea really"

so the interviewer tired to be all cool "like uh yeah i thought i heard sometihng>..."
it was hilariously horrible

I am going to look for a new car today. This is the first time I wasn't forced to get a new car cuz my old one completely pooped out. It is also the first time I am looking at a dealer and not just getting one for like $500 from somoeone who can't drive anymore or gets a new car. It is very nerve racking. My parents are looking for a new car too so we are gonna look together (perhaps get a buy one, get one free, haha)! I don't know. LIke my car I have now is dying slowly and I dno't want to have to be forced to find one right away or put anymore money into it so I guess it is time> It leaks everything and keeps having little parts break.

I need something roomy for my big legs and I drive a lot of people around a lot so I need it to hold a lot of people. And I want it to have good mileage. And power windows. Those are really my only necessities, oh and prolly air conditioning. And blue. I think i want blue or red. Wish me luck...

I would buy the gramps mobile if I were in the market. I love it! I want to see that baby on pimp my ride.

I saw Bobby today at the cheap show in Cheektowaga with (e:jill). It was really good and soo sad. I love sad movies. I really like when I cry at movies. I don't know why but I really like sad movies and this was one of them. Even though you kinda know where it is giong, it is still really sad and crymaking.