I saw (e:scott)'s comment about how he updated his theme, so here is the new visual. 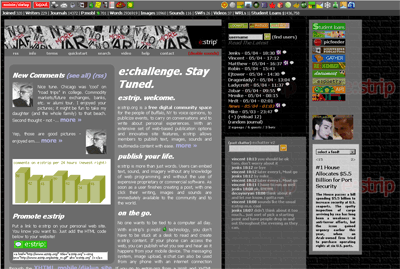 I am thinking about adding a preference option to have it "autoplay" a user's theme if they have one made when you are logged in and visit their journal.

Rememeber for even more control there is always the API.

I wasn't complainin'. (I just hadn't finished yet)

The estrip logo that will stay

Sorry it took me so long to publish this repsonse. I refused to publish it until I changed the site code to check for real (e:name) links before I wrote it because I didn't want (e:strip) to show up as a name link.

Besides being one of my bestest friends, (e:twisted,359) has donated the most money, time, and hardware than any other peep to this community. Not to mention that I generally value her opinion over all others because of her deepest understanding of the project from the hundreds of hours of dialogue we have had about it. In fact I would say that on many levels, the project would not have happend if it wasn't for her and her commitment to it's existance. In essense, (e:twisted), I love you!

Here is my deal with the colon. Like (e:matthew,717) I find that the colon is important in the name and the logo. One reason being that there are two commerical products that use estrip as a name. One is envirostrip and the other is some sort of medical imaging system. I suppose I should just trademark (e:strip).

Seeing as the site is not a commercial project I could care less if some people can't find it because they are too stupid to try googling with a colon. It's not like I will sell less widgets because of it. I like the colon as part of the design as it reflects the identity of the site as I intended it since march of 03. Everything that ever said (e:strip) had the colon. It is in fact how you guys link your journals together. Unfortunately, they do not allow colons in URLS.

People can find it by typing (e:strip), ((e:strip)), elmwoodstrip, or elmwood strip into yahoo or google. Soon it should come up under number one for estrip as well, it just takes some time for the robots to catch up with the changes.

Eliminating new peeps that are not capable of making the jump from the (e:strip) logo to estrip.org or elmwoodstrip.org might be to my advantage as I am the one who deals with all the people who need help figuring stuff out.

So this is the final logo. (e:matthew) approved. It provides the most space for the (e:strip) and is compliant with the way many of the old street signs were formatted in buffalo. It also makes it obvious that it is not estriporg as one one. I really liked the google it, but I removed it as I don't want to support a private corporation.

The org was added to make it more obvious that it was a web thing fro people that couldn;t make the jump from (e:strip) to estrip.org. Many of the road signs here have the street extension written vertically like that.

I'm glad That a final solution was reached. I'm glad that the webadress has been clarified also.

I like that. I definitely like the colon from a design/logo/aesthetic standpoint. But I agree with twisted's points about simplicity/usability too. But if google etc can find it with or without, then it seems we've solved both problems, no? But the other thing is- in this case, doesn't the colon function a little like an apostrophe? (i.e. replacing missing letters?) i.e. (e:strip) is an abbreviation of elmwoodstrip, right? I mean, this site is elmwoodstrip, first and foremost, isn't it? B/c while it's nice to have the estrip.org doman, I wouldn't want to see elmwoodstrip.com/org disappear altogether... I feel the term (e:strip) only makes sense if you know it MEANS elmwoodstrip. Does that makes sense?

Thanks (e:Paul). I love every pixel of (e:strip). And as the chief (and only) PR person for a:link, I thought long and hard about how to get new users (not that it did me any good) -- which may be why I came up with such a treatise on usability when given an opening. Then again, I can spout off on many topics, so I guess I don't have an excuse. ;-)

Anyway, thanks for caring enough to ask us common peeps for feedback. We love you too!

I added two new themes today. They might still get changed some bit, but they are usable now. One is called Polluted River and is about the Niagara RIver. The colors came from a vector illustartion I made about the time I lived off of river rd in riverside. 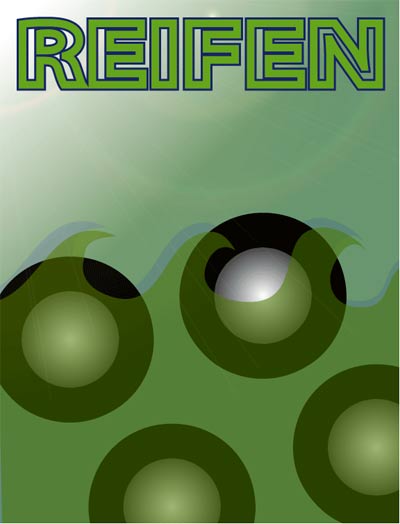 The other is sand. It is about my wish to be out in the sun. Both have new icons in the theme bar at the top of the page. Sand is the sand dollar, and polluted river is the tire image from the pic above.

This watermelon theme is a new theme based on the new quicker display system. It was inspired by (e:maidencateyes) watermelon comment and this picture of a watermelon rose. I am determined to make one of these now. 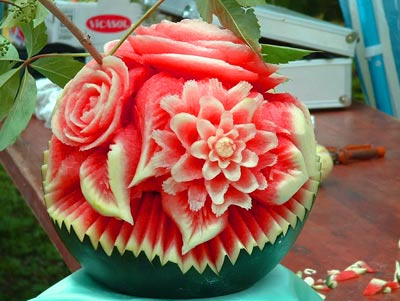 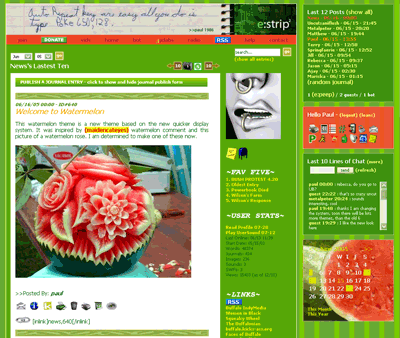