Here is a rundown for some of the (e:strip) v1.5 updates. Its not a huge change from v1.4 to v1.5 but there are some great improvements.

1. The (e:strip) logo at the top of the banner is a link back to the elmwood journal/home page.

2. Major Time Saver - There is a new "QuickUpdate" button on the journals directly under the user's pictures. By clicking on it you bring up a pop up box which allows you to quickly add a journal entry without having to access the more complicated update page.

3. The traditional update page, still accessed by the write button at the top, has had many upgrades. You can now update and delete multiple journals at a time. This saves lots of time. I have also moved the uploaded images library to a separate window in order to speed up load time when doing text-only updates.

Well the Amy Goodman event at Hallwalls is coming up this Wednesday. I hope that I see all of you there. You can see the prices on the flyer above. If anyone would like tickets please email paul@radiofreebuffalo.com

to radiofreebuffalo - the site of the Buffalo Coalition for Progressive Media.

The radio is back up

The radio is on all day today playing a mix of music including Kimya Dawson.

What -- Stop the FTAA! Rally
Where -- Niagara Square, Downtown Buffalo, outside of Buffalo City Hall
When -- Saturday, November 22nd at Noon

Tons of Musical entertainment will be provided, featuring the 12-8 Path Band, the Buffalo chapter of the Raging Grannies (in their premiere performance!) and Jean Dickson. Join us and hear from workers from Tri-Co and Buffalo China who have lost their jobs, residents from Hickory Woods, elected officials, and local community groups. Props,puppets, and street theatre will be plentiful!

The Free Trade Area of the Americas (FTAA) is the expansion of the North American Free Trade Agreement (NAFTA) to every country in in Central America, South America and the Caribbean, except Cuba. NAFTA has devestated communities throughout North America, including Buffalo; over 50,000 jobs have left New York State since NAFTA was enacted. If you think NAFTA has been a disaster for working families and the environment in the US, Canada, and Mexico, the FTAA (also known as NAFTA on Steroids) will be far worse.

This week, labor, environmental, human rights, and peace groups all over the nation will rally together in solidarity with thousands of people protesting the FTAA as it's being negotiated at the trade ministerial meeting in Miami and with those protesting human rights violations at the School of the Americas (SOA) in Georgia to stop this "Race to the Bottom" and to affirm that Another World Is Possible!

The WNY Fair Trade Coalition is a coalition of labor unions, environmental, community, and student groups. For more info on the rally, call Roger at 833-5416 or Charles at 894-2013.

We will also be doing a car caravan "Reality Tour" of Free Trade's Impact on Buffalo earlier that Saturday morning. Car caravan meets at 11 AM sharp at Buffalo China/ Oneida at 500 Bailey Avenue. For more info, call Mike or Emily at 882-6003.

Unfortunately, the new Elmwood Radio Station will be down today while I upgrade the server from Windows XP to Suse Linux 8.2.

Sory about the inconvenience. 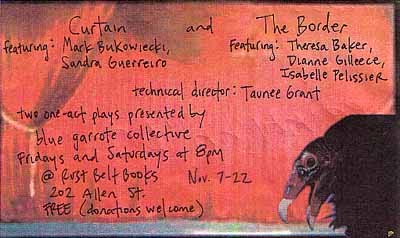 The radio is German again

So we are having another German radio day. Please tune in and try on another flavor of radio. It is a crazy mix of Bau auf, Bau auf and Freddy Quinn and Nina Hagen to Bluemchen and Stefan Raab. There is even the DragonBallZ theme from German television. I like to think of it as Germany through the years, hahaha.

To tune in simply click on the link Elmwood Online Radio under the userPic. Alternatively, you can click this

Join us this Friday, Nov 21, 2003 at 8pm for two films that explore the image of power and the power of the image.

THE THIEF OF BAGDAD

In The Thief of Baghdad (2003), Diane Nerwen continues her practice of appropriating arresting imagery from film and mixing it with politically charged dialogue. Condensing the beauty and exoticism of the mystical capital of Baghdad, she slips in a newly realized paradigm of domination. As in much of her work, Nerwen explores the allure of place, film's ability to reflect and create desire, as well as the conceit that the video's images and soundtrack are part of same narrative.


IMAGES OF THE WORLD AND THE INSCRIPTION OF WAR

The German-Egyptian filmmaker Harun Farocki is one of the most influential documentarians alive today. His thought-provoking work is not as much about events and people as it is about ideas and mechanisms in a larger cultural context. A meditation on vision and power inspired by photos of Auschwitz taken by American bomber pilots during WW2, IMAGES OF THE WORLD creates striking, deeply meaningful connections between military reconnaissance and the state of the world.

V-P Dick Cheney is in Buffalo today to take part in a $1000/per plate fundraiser. There will be people protesting in the circle. Currently, a van from every news station is there.

While Cheney is here to collect a $1000/plate, let's let him no there'll be no free lunch in Buffalo.

Today we will be having live radio shows on and off today, tune in and check it out. If not there will be music.