The update page is extremely updates. Here it goes.

1. No more copying image code. Simply click on the image in your list and the code is automatically added to your entry.

3. To make a link simply type the address and it converts into a link. This has the disadvantage of not allowing you to make an image a link, but I think the speed increase in getting your thoughts and links out faster is worth it. Below is an example

I have also activated email accounts for all users except emily and chris. I do not know what password you two would like. Please email elmwood (click on the email link under the user pic) if you want me to set up your accounts. The current limit is 5MB. Please also email if you need an extension of this limit and I will see what I can do.

You can log in with the email button above. Your login is your username and your password is your journal update password. You can change your preferences to have your mail forwarded somewhere else or just check it using our webmail service.

Links
You can finally change your links. The instructions are found on your update page. I tried to make it as efficient as possible.

Robin brought this to our attention via the UB list serve

<Create a TV ad that tells the truth about George W. Bush.

Sick of the propaganda being beamed at you from the current administration's media mavens? Here's a new way to fight back: Enter:

Voter Fund's political ad contest. You don't have to be formally trained in the art of filmmaking, just ready, willing and able to create an ad that tells the truth about George Bush.

Loren from Access Community has brought the wireless network idea back onto the forefront. He wants to do it now. Maybe we should too. The idea being to create a free wireless natwork around elmwood.

I also spoke with terry and we are considering opening up a storefront for the spirng and the voice recording database. i would also like to host a happening next month with artists from sound, video, and web art. We will have to see what happens.

Red Death Party - You Are Invited!!!

The "Red Death" had long devastated the country. No pestilence had ever been so fatal or hideous. Blood was its Avatar and its seal -- the redness and the horrot of blood. There were sharp pains, and sudden dizziness, and then profuse bleeding at the pores, with dissolution. The scarlet stains upon the body and especially upon the face of the victim, were the pest ban which shut him out from the aid and from the sympathy of his fellow-men. And the whole seizure, progress and termination of the disease, were incident of half an hour. But Paul, Terry, Matthew, and Holly were happy and dauntless and sagacious. When their dominions were half depopulated, they summoned to their presence a thousand hale and light-hearted friends from among the knights and dames of their court, and with these retired to the deep seclusion of one of their castellated abbeys. 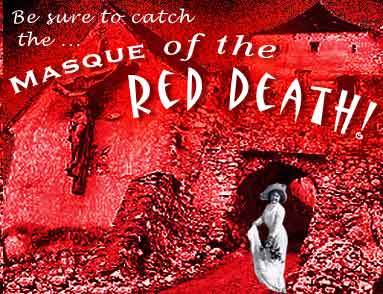 You are Horridly Invited to "The Masque of the Red Death", Friday, October 31st.

We will be celebrating Holly's Deathday.
Costumes Recommended