Kinda cool seeing my own record on Spotify, iTunes, AmazonMP3, etc... feels all official and stuff. I remember when you used to need a big label to get any real publication. Well, no label here. We did this all ourselves.

Anyhow, after about 6 months of in and out of the studio, it also feels great to have it done and move on to the next record. 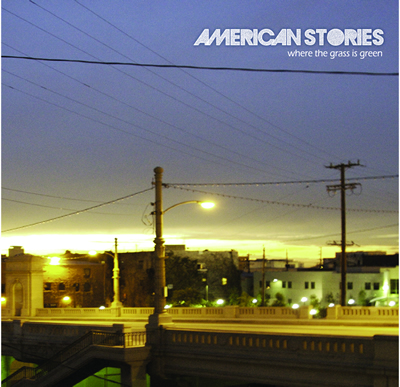 American Stories - "Where the Grass is Green" (Listen on Spotify)

If you enjoy this kinda stuff live, we're playing DBGB's at the end of June.

Congratulations. I love the way music is being democratized.

Sing along with me, California

We've been working hard on this recording all winter. I can't believe it's almost ready for release.

We're not expecting any real following for what we're making here, but the experience has been worth it, 100%.

This winter and spring's been trying for me personally, to say the least. Lost a child in the womb. Lost an uncle and mentor in a freak accident. Made a record that I'm proud to be a part of.

Anyhow, I'm looking forward to a warm summer with brighter days ahead.

Thanks for the kind words!

Sounds great by the way!

Must feel great to see all of your hard work paying off. :)

So sorry to hear about your losses... What a terrible feeling that must have been. I can barely imagine.

It's been a long time since I'd posted anything here. I forgot how much I like this site, actually. Still smooth and effective with good readin'. Looks good on an iPad, too, which is where I read most blog-type-stuff.

Anyhow, I've been working with a new local band, American Stories. We'll be releasing a record soon to the usual non-existent fanfare that local bands get. Still, it's going to be a good record and I hope people enjoy it.

We had the good fortune to have friends from "Nickel City Blend" film a recent rehearsal. They're posting them as videos and I think they sound pretty good for straight-from-board rehearsals.

Nickel City Blend does mostly hip hop videos. So, I think it was especially cool of them to branch out and take interest in our little indie/americana/whatever rock band. (Whatever you want to call it, it isn't hip hop. It's far from it.)

Without further ado, here's the videos.


and here's another called "Occupy My Heart":


If you enjoy this kind of music, awesome. I hope you'll follow us on the interwebs and such and maybe come to a show. We make the twitter noises at @AmerStories.

Every month or so, you can catch us playing a free show at Ulrich's tavern downtown. It's a lot of fun and still unbeknownst to many a hipster.

Anyhow, glad to see estrip still alive and kicking. Leave comments, for I like the validation!

About 2 weeks ago, I got an email from an old friend, Bob Fera. Bob and I go way back. I played bass with his band for a few years, wrote songs with Bob, recorded a record or two. Needless to say, I love Bob like a brother. A brother I hadn't really heard from in a decade.

About 10 years ago, I'd quit his band. Just showed up at practice and said "Sorry guys, I'm done."

I just wanted to play different stuff, was fresh out of college, broke, lost my parents, and just needed a change in my life. It was a bit of a dick move at the time, but people quit bands. It happens all the time. Bob was not happy, but accepted it. After that, we hardly spoke.

So, a decade went bye. I got a job, played in other bands, recorded my own stuff (some good, some not so good), and generally moved on. Life's been, well, pretty good lately. I could complain about a few things, but compared to my 20's, my 30's have been a breeze.

I think Bob's voice is unparalleled. Just about everyone who sees him does. The man can sing. Unfortunately, he's never gotten the acclaim I really believe he deserves, not only as a singer, but as a songwriter. Bob's songs are simple, catchy, honest, and full of heart. The fact that his voice is so perfect sometimes distracts the listener from hearing how damned good the song itself is.

Here's an example... I was at his gig last weekend at the Tudor Lounge and shot this video:


Please excuse the cheesy video cross-cuts, I was covering up for my poor iphone camera skills, beer spills, etc. In the end, I tried to make the footage fit the song (titled "Just another mile...") and cut out my thumb on the lens!

Here's another track that I'd recorded with Bob back in the 90's. (The man can sing, but the song itself is pretty excellent..)

Anyhow, seeing Bob perform this past weekend highlighted (for me) how important Bob should be on the buffalo scene. More people should hear his music. Seeing Bob light up a stage is something we need to see more of.

So... why did Bobby email me 2 weeks ago? Well, Bob asked me to come back and play bass with him again. He's moving the current bassist (Nate) over to the piano.

Of course, I said "yes". Bob's making some of the best music in town and I am excited to be a part of it. More importantly, I'm even more ecstatic that I'll be seeing my old friend a lot more.

Why the "Double Rainbow" is the good for you.

The "Double Rainbow" video. If you haven't seen it, you will... it's everywhere.

I've seen several articles talking about how this simple little video of a guy going bananas over a rainbow has gone, well, bananas since Jimmy Kimmel tweeted it on the 4th of July.

Most of these articles I see focus on one of two things:

1. The speedy rise of the video's popularity (6 million views as of my typing this...)
2. The guy... Paul Vasquez (aka "Hungry Bear") and the fact that news outlets are calling him.

To me, that's the wrong side of the story. Very few writers are focusing on WHY this video is so popular. Why do people watch it over and over?

In this case, yes, the video's kind of funny, but I think this one's more than just that. What I believe attracts people to this video is the joy. This man is not faking it. The emotions he's going through, the glee, the pure joy at a simple fucking rainbow, are real and infectious. Who wouldn't want to feel that kind joy? Who wouldn't want to see someone else feel that kind of joy?

It makes you feel better just for having seen it. That's the kind of video that I really think SHOULD be viral. I see a lot of funny videos. Most are staged (Keyboard cat), some are cute (David after dentist), but this one is uplifting.

If you're laughing at the video, it's likely a GOOD laugh. The "Hungry Bear" wants you to laugh and smile and feel some joy, too.

The world sucks enough joy out of each of us every day, it's pretty cool that stoned guy (he's gotta be high) lovin' a rainbow can put some of it back.

Ok enough, if you haven't seen it yet, then here it is:

So far, I haven't seen anyone making fun of the guy. The only "parody" I've seen was this song done with his consent. (The proceeds from the mp3 go to him and Yosemite, which I think is pretty cool, as well.)

So go ahead, watch these videos and laugh, smile, and feel good.

I was at the gym and a TV was on with subtitles. It was Fox News and all it said was "Obama's on vacation" while the rainbow video played. I was a little miffed at their bullshit likening of the mother fucking POTUS to a guy named Hungry Bear.

Then I realized the subtitles were broken and had been there for several stories already.