So it's not the house warming party but its the annual (e:terry)'s 26th and (e:mike)'s 23rd birthday party and maybe my graduation party? Everyone is invited. Feel free to bring whoever you want, we have lots of space. 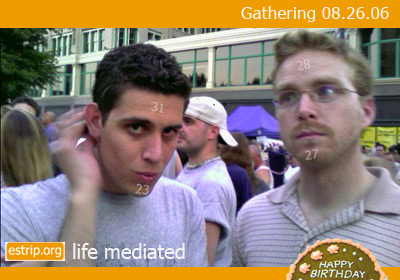 This saturday at 8PM at 24 linwood. It's at our own house now, so the front door is the right door for once. No more living in the rear!

Assuming it is still on that day I plan to be there, I belive I'm free. I look forward to seeing the new place in person. Of course there will be lots of pictures taken. If the date changes hopefully I'll still be able to make it.

Um...so I guess I can't make it to my own birthday party. That is the day of Jill's sister wedding! It can't be then!

Awesome! I have to work the Bills games, but I can come play afterwards. Looking forward to seeing the new house and another estrip gathering. I'm in

Today we reached our 16,000th journal entry. Thank you to everyone who has been a part of this project and shared a part of their life with the fabric which makes up the digital quilt that is estrip.org. I am defending my thesis about it today and then it's over I am pulling the plug and moving on to bigger and better things in cooler cities. Just kidding.

(e:theecarey) and I have a bunch of plans in store to expand estrip further and my committment to Buffalo is pretty permanent since I just bought a house in the middle of the city.

Not sure how far your plans go and how you want to expand the site. But I know (e:strip) spawned a sister site (sord of) Alamedalink. Who knows maybe some day someone will come up with sites in other cities and the sites will. Each site would be local but could have links to each other. That way say for example I wanted to visit the washington Area instead of asking Southernyanke where to go and what to do I could get advice from a bunch of people from the area. I think often people living in the area give a better vision of a place then a site trying to spur tourism. In any event I look forward to the site growing and changing.

I was going to recommend checking out UB Green, but I gather that's who he's doing the project for in the first place. When (e:dragonlady7) did an article last fall about energy efficiency in the winter :::link::: she learned a lot from a local company called Apollo Construction Co :::link:::

Surebert 1.42 fixes a bug introduced by Adobe and Flash Player 9 which cause the page to give an out of memory error in IE when the page had more than one flash movie embedded which used the javascript external interface.

I got this as a site message otday.

Hi there!
I wanted to invite you and your readers to see the documentary The War Tapes (the critically acclaimed Iraq War documentary filmed by three NH National Guard troops) tomorrow (August 31st) at 7pm. The movie will be opening on Friday, but there is a free sneak preview tomorrow at the Market Arcade. To get a better idea of the movie, please check out the reviews section of The War Tapes site:

This extraordinarily important film is the first documentary to chronicle the war through the eyes of those Soldiers who lived it. Director Deborah Scranton and Producer Chuck Lacy gave video cameras to a group of Soldiers from the New Hampshire National Guard prior to their deployment, and this film is the result. Awarded "Best Documentary" at the Tribeca Film Festival last month, this film is a must-see for anyone who seeks to better understand the war, and its impact on the men and women sent to fight it.
Check out the Trailer here:

or on the Apple trailers page. You can also read some of the many great reviews that the movie has received here:

To get your free ticket, please RSVP to buffalo AT thewartapes.com . If you can't make the screening on Monday, the movie opens at The Market Arcade Film & Arts Centre on August 4th.

Hope to see you there!

Categories are now in alphabetical order, sorry about that. You are also now seeing surebert 1.38.
--paul

The site is now using surebertCom 1.38. I squashed a whole bunch of mostly IE bugs. IE and firefox should almost be on par. I also added a new feature where if you egt a new site message while on the site, it pops up for about 20 seconds. It only show messages which have not already been viewed. Other messages show up in your messages control panel.

I upraded to the lastest surebertCom 1.27.

You may need to empty your cache but by using surebertCom I was able to reduce hundreds of useless lines of IE code. You should notice that the control panel icons and themes icons convert to transparent PNGs much faster now.

Also in this new verison the hand lines up at the far left so it should never get in the way of any icon.

I switched everything over to surebertCom 1.22 If you notice any problems please send me an email. I did notice right away that it fixed the message pop up box selectAll and send mass message toggle. It also made the box drag better than before.

There are lots of other upgrades coming soon as I finish the stupid thesis.

PS. I noticed that the flash video boxes in the journals are not displaying at the right size. I will fix that tomorrow.

Fixed the bug that (e:jenks) found which effected non-logged in, non-admin members. Should be all set now. Thanks for noticing. (e:twisted) couldn't see it as admin.

(e:jenks), I fixed it everyone should be all set now, just empty your cache.

Jenks, I'm not having either of those problems on Firefox or Safari. Try clearning your cookies and cache. And you might want to "Reset Safari" (under the Safari menu), which will also reset some of the Safari preferences. You might have to set some prefs again (like "Block Pop-Up Windows," etc.), but my Safari is much more stable since then.

i can't seem to click the 'edit post' typewriter icon- in safari or firefox. Dunno if that's related.

Living off the radar

I was writing a comment for (e:zobar,89) and it turned into this entry.

Well, having dealt with the news a bit, it seems that "The News" does not search for what is going on but rather relies on PR directors telling them what the news is. Frankly, I think that is a kind of skewed way of reporting about what is going on but everyone I have talked with that has real media experience says that it is just the way things work. Now that we have a director (e:theecarey) , maybe she can do a little stuffing on our part.

Considering how overwhelming active and alive our comunity is and the fact that we have over 15,000, ~13,000 images and over 3,600,000 views with little or no advertising other than word of mouth - it is amazing that we exist pretty much off the radar. I would say that it is 100% a lack of effective public relations. I have never had any interest in doing it myself.

On the other hand, it has worked well for us in a way, because we have not had much trouble getting enough members to keep to alive and exciting, while avoiding the mainstream myspace/livejournal crowd. I mean we were in the news a couple of times and honetsly, what kind of validation is being in the Buffalo News.

I think being in artvoice would be 1000 times more effective andexciting. It is something I have thought about a lot. Originally, I thought just being hosted by artvoice would make a difference. I am kind of surprised that Jamie Moses wouldn't want to pimp out our existence more to demostrate the benevolence of artvoice. I mean, the service that artvoice provides us, probably makes them the single largest contributor to any non-commerical online public space in Buffalo. If it were me I would brag about my good will ;)

Sometimes I think it is my strict anti-commerical stance that keeps us under the radar. Othertimes, I think it is the fact that we mix news with personal lives and so the outlets that try and emulate the "real news" (including the buffalo news, lol) frown upon that as tabloidesque frivolity.

Then there is the fact that some people try and keep their real lives separate from their journal life because of whatever it is they are confessing. It is a mix of wanting to share and wanting to remain private. As I said in my thesis. It is a combination of wanting to be present and involved while avoiding public scrutiny.

Frankly, we have had one of the most lively community based blogging site that I have seen. Especially for a town of this size. So I say if the news and other media outlets don't notice us without us telling them and shoving it in their face, then they obviously are not attuned to what is going on their city.

Even without being "noticed" today, we will continue to sew the quilt our existence until one day it is so large and old that historians will notice just how fanctastic we really are.

Maybe next year when they have their bloggerCon we should just show up with 100 (e:peeps).

plans are being devised. More to come later :)

Yes, our #1 newspaper has a nasty habit of transcribing press releases and calling it news :::link::: . This is relatively easy to figure out if you get the same press releases that they do.

As for the #2 newspaper, I'm really not sure why we don't pimp you out more. [I also don't know what we'd say without sounding self-congratulatory.] I wouldn't feel too bad, though; getting them to promote our own website is like pulling teeth with a left-handed corkscrew.