Currently Listening to the new Weezer CD for the first time, So far it is verry good with Prison Break coming on at 8 won't get to hear it all but that is ok. I wish Jon Doe was never cancelled that was a great show. But So is Prision break and since they both star the Same actor would be kinda tough for them both to be on still. Yesterday I watched an interesting gangster movie called Layer Cake. It was from the same guy who Directed or wrote (can't remeber) Snatch. It is a nice complicated twist and turning nice and violant movie. I also watched a nice Movie with some good hot tub nudity and some snowboarding also and a cool but kinda goofy snow boarding story line Called Frostbite but it was still enjoyable. Wich brings me to a point that if I have made before I'm sorry. Why in pornos The sex is amazing but the story and the acting suck. That is not true in all of them there are a few actors who are really good and there some lines that they really concentrate on the story. The other side to that is Violant and profane movies why do the most they show is tits and or some frontal hair. Yes there is some boning action going on but never graffic or even close. With the Exception of that movie Where Billy Bob Thorton Bangs the Hell out of Hallie Barie that was some intesnse sex. I would Like to see some coloborations between the two sides of moving making. You can kill 300 people and make people cut off there own arms and it is ok. But as soon a Hard Cock is shown or some snatch the rating goes up to NC-17 and it is hard to sell to Movie Houses. But what I don't understand is kids under 17 unless with a parent arn't allowed to See Rated R movies and ways. I think there should be More NC-17 movies made. Not just for sex but for Violance and Swearing. Why not make some Movies that are For Adults and Adults only that arn't porn but have some better sex scenes, or even really vulgar Comedy at a comedy club in a violant movie.

Well I wound up doing a lot Yesterday. I put to checks in the bank then went to tops and Bought some food for the homestead. Luckly this time the single bags didn't break on the way home for those of you who remember that. I went to the mothers house and then went to Best buy and Bought DVD Recorder/VCR I still have a lot to figure out but last night I figured out the Basics. But that was after the Game. On the way to best buy I saw Decoyisryan walking down Elmwood counldn't tell if he was with anyone moving to fast. Then down near buffstate where the Hotel is supposed to be someone was selling stuff to get money to try and stop the hotel. I could see he had long hair but couldn't tell if it was Jason or not since I've never met him before. At Bestbuy I bought CD's to Like Rob Zombie, The New Queensryche, Lacuna Coil, Rammstein and Weezer not sure who else. After that we went to this Coffer shop Bread place in the same huge shoping plazza can't remember what it is called Got a Cookie and a Jones Soda. Got home and got ready for the Bandits game and went early so I could Order my playoffs tickets. The Bandits wound up winning and because of someone else winning or losing they will atleast have one playoff game at home. It was a really fun game but wound up being an expensive weekend. Not sure what is up today maybe try taping a couple movies on a DVD.

First of all if any one likes South Park and missed this weeks then you may not want to read my post. I got to watch South Park it was an interesting one. Basicly they bashed the Muslums getting mad over Cartoons of Alah and bashed Fox's Family Guy. Fox Edited out Aliajah and they showed Rioters and translated some guy talking in arbic that had nothing to do with the profit but basicly said Family Guy isn't funny and about how the Jokes have nothing to do with the story line, it was interesting and in some ways they where right on. I do like Family guy and think it is funny show. This episode is to be Continued untill next week. I don't think they will run a Terrance and Philip show like they did when they where supposed to be revealing Cartmen's Father, from what I understand that got a lot of fans Pissed but we shall see what Happens next week. I like shows that bash everybody and are funny and fun to watch. Watching both South Park and family Guy is a good way to Relax. I wonder if Family Guy will try to get back at South Park or if they started it first. I know on Clerks The Animated Series DVD Family Guy is Called an Unfunny Show by Kevin Smith wich surprised me, I think there is some Beef that he isn't talking about or maybe I missed something. On an unrelated note hopefull The sabres win Tonight and the Bandits win on Saturday.

Man this week we have had a lot of oredrs this week. Been a little Tired. Last night I got home just in time to watch the Sabres. Saw the first Period then listened as I watched Bones that is a good show. When ever there was a goal I would Switch over then watched the rest of the game but sleept a bit and woke up to the winning goal I think I saw all the goals. I didn't think we could beat the senators but we did that was awesome. This week I went to See "inside man" it was a good action drama movie I liked it. On Cable I Finaly saw "Saved" it is funny and interesting. I have been meaning to watch it for at least a month. It is about a Religous Highschool and this one girl trying to save her gay boyfriend gets preganant it is interesing at the very least. The Bandits are officaly in the playoffs and on saturday they have a regular Season Home game Vs. Colorado it will be fun. Speaking of that I missed South Park Last night but Hopefull will catch it tonight. Hopefully there will be some issue that I can discuss on here soon as oposed to just recounting my day.

Well acording to my stats up top this should be journal 600 wow that is a lot of journals. The amount of views allmost seems not posible it avarages out to 147 views per journal that is kinda scary but I'm sure it is correct.

The Pictures are from Artvoices Street Fest in 2002 The Band is Jackdaw. If I have put these pictures up before I'm sorry just thought a couple people might enjoy them. 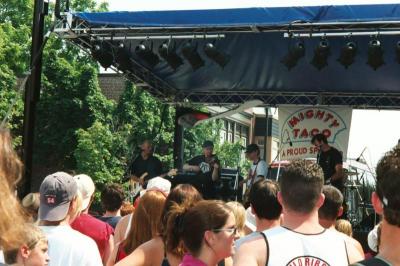 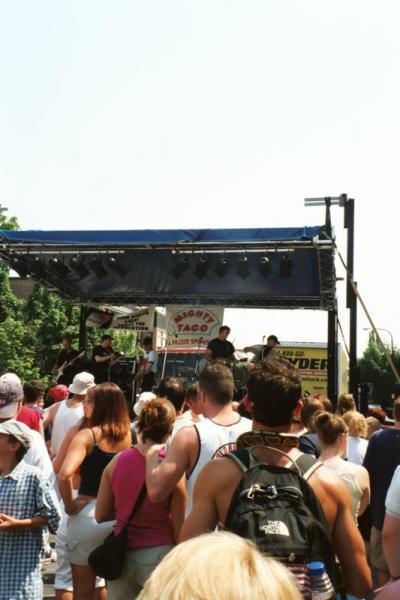 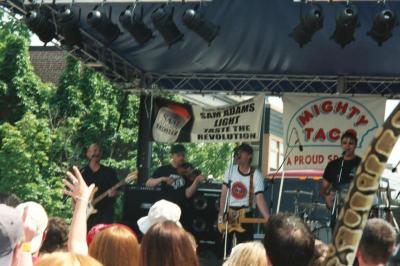 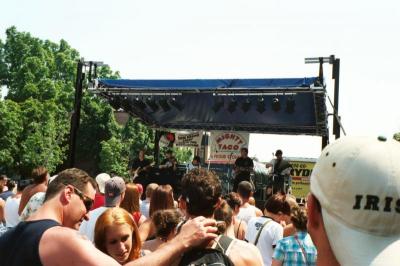 Oh man did the sabres play crappy last night I gave up when it was 5 to 0 I saw some basketball but was so tired just caught up on my sleep. But I was verry Happy that the Bandits won on Friday Night and then I found out this morning that they won last night also. Both games where out west. They Have now clinched a playoff Birth. Hopefully they can get home field advantage through out the entire playoffs but I don't know if that is possible or not. We shall see what happens.

Sunday Night is Wrestlemania if there are any wrestling fans out there but if there are then you would allready know that. I belive on Saturday Night they are showing part of the Hall of Fame (WWE) ceremonies. I just Wish I had another VCR so I could Watch and Tape it On the Big TV Maybe I'll buy one on saturday but I doubt it. Then I could Tape my Sunday Shows. I used to get PPVs and invite people over and have parties that was cool, then watch the replay and hear all the comentary and the interviews cause with a few people you miss a lot of what is going on. Not sure what time But NCAA Basketball is also on also. This week of work was long and tiring so chillin is about all I feal like doing may try to find a good movie on sat. 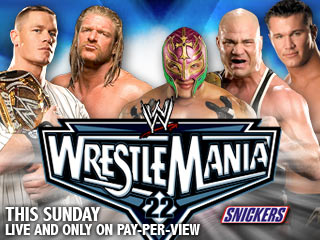 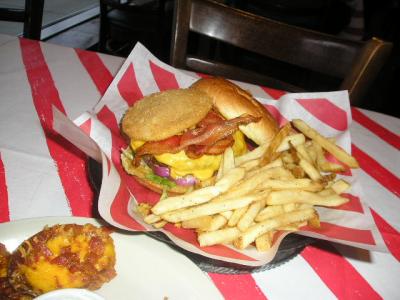 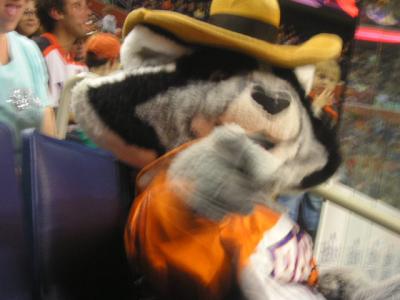 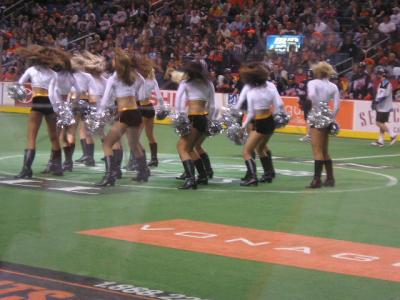 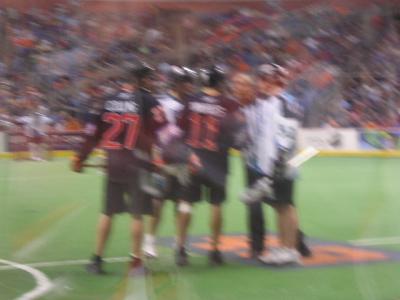 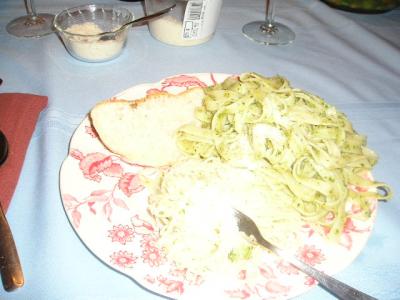 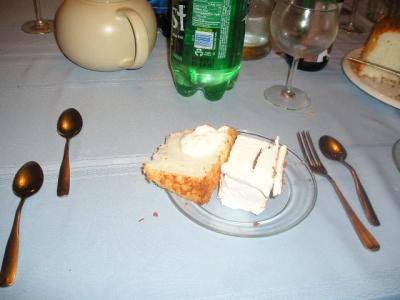 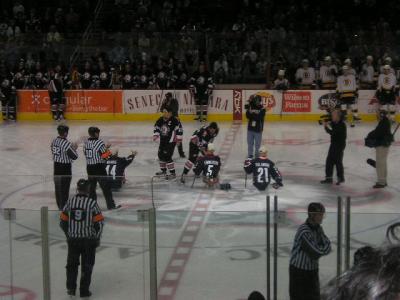 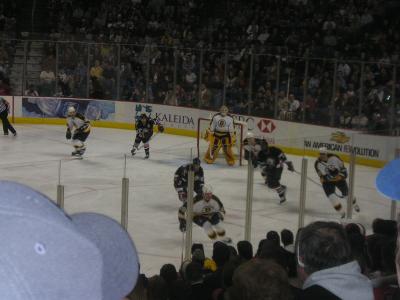 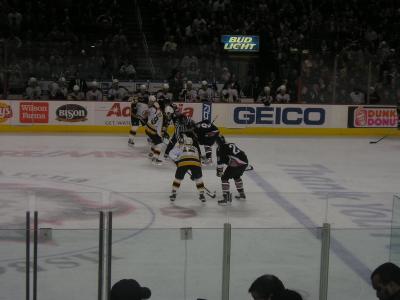 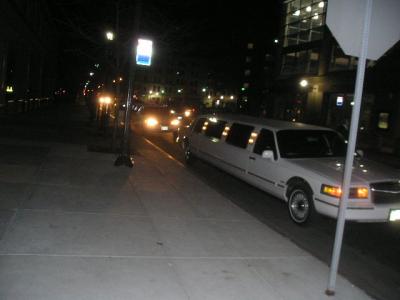 Maybe I'm not very talkative because There was a verry heavy work load at work today. Maybe it is cause some food disagreed with me today. I was hoping someone would post on some topic that would get me going but nothing today inspired me. Tonight I will Watch House and Boston Legal maybe Real World Key West, it is an interesting show I like to see how people react to each other. I'm going to the Sabres game Tommarow Hopefully soon I will post some more pics.

Hopefully that link will take you to a few toronto pics I put up as a way to play around with the pic Feeder they are pictures that I didn't post here from What I remember. I still don't completely understand how once you are there how you would download the pics but you may find it interesting.

MY sis's going away dinner was nice I enjoyed myself. Then Today I had Jury Duty. Luckliy (for some people unluckily) The case I was selected for wound up be setteled so all the possible Juriors for that case includeing me where released.

I forget who but the sabres play tonight. Prision Break (good show I think) is followed by (best show on tv) 24. Man it is really getting good. On Wendsday I'm planning on going to the Sabres game that should be fun. Since the tickets where pre bought then we won't get a Mini Jersy, oh well it should still be a great time. I'm also getting a little bit excited cause I know it is Peak Concert Time Verry Soon. I wish I was going to Ozzfest I bet it will be Amazing, oh well. I know there is something else I'm forgetting but oh well. Hopefully I will have some interesting topics or issues to debate soon.