I never make Resulutions can I can never keep them plus I never have good ones. Lets see there is get a girlfriend, be more social, stop whacking off or at least cut down, chill on the horneyness, give more to charity, eat more healthy food, cut down on the porn (ok so that one I did do some), Call my friends more often. But what ever I come up with never seems to work My life never seems to improve like I would like it to. I'm still just as messy as I always was, I'm still just as dirty. So why make resolutions you know you can't keep. I hope everyone has fun and enjoys tonight, I'll be watching MTV's Count down to the New Year.

Since a Saw two posts about The OC I figured lets make it 3. First of all I didn't know they had an OC personality test. I would have no idea where to take it any ways. I admit that I like The OC a lot. I think it is a very good show and it is fun to watch.

I wish I could find someplace that I want to go for New Years Eve, but I can't. I Guess that I will just watch Fox's or MTV's New Years Eve Special by my self, oh well. It is not only in the US where they celebrate this holiday. I remember back when there was that whole Y2k scare and it was the end of the millenium sord of and they would show on TV the celebrations from all over the world and how they where differant and the same. I don't know how they celebrate it but isn't chinesse new year a verry big deal in china. If I remember correctly my cousin said that in Korea they ceelebrate Chinesse New Year. I don't remember the details but I do know that we are not the only ones who celebrate the coming of the new year.

[inlink]marmizo,11[/inlink] I first of all think that everyone has some type of crutch in life or some way of dealing with things most often it is negative. Some people eat, drink, smoke, screw hookers, cut themselves, draw, paint, clean obseviely, get addicted to porn, start fights in bars, do coke or other things. We all deal with life differantly. We should try to deal with stuff in a positive in stead of a negative way but if we did do that then all the bars would go out of business. But there is a differance between us doing that to our selves and having our parents doing that to use. If the parents are teaching the kid to deal with life through eating then that is wrong and yes they should be held accountable how that could be done I have no Idea.

However we have no idea why the kid is so fat. Hey if we didn't have fat kids there would be no offensive line men in football any more. Hey I love food. I love how it tastes in my mouth. I'm blessed with a high metobolism. So I eat a lot and stayed thin as a kid. But if i had a low metabolism and did sedintary things then I would have packed on the pounds to. So untill we know the entire story it is hard to judge others. Now if the entire family is fat then it might just be there life style and some genetics that they enjoy eating. Yes the eating could be a social problem but it could also just be that they enjoy eating food.

It is true that being obesse does add health risks. It is true that eating healthy is better for you. But you can only eat what you enjoy. Would you rather eat healthy food and not enjoy it as much or would you rather eat stuff you like and maybe die younger? What I know is I'm not going to judge someone untill I have all the facts. I have skinny friends and heavy friends not that I ever call any of them. I also have a couple of friends who where heavy and cut down their weight. They are all cool people. I don't care how much they weigh. I'm talking about guys. Girls is a whole nother story.

Today I saw a couple of sexy ladies with Jet black Hair. I think Jet Black hair is very sexy. For some reason I really like it and blond hair. The two mixed can be amazing. I also like that song by Jet now I'm going to have it stuck in my head. I hope everyone does something nice for New Years Eve. 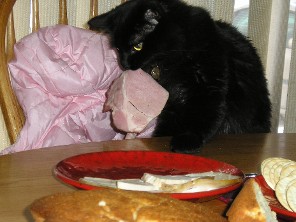 Now that I know that the above picture was to big I played around with one of the picture software programs I have on my computer and made it smaller. I may do the same with some other pictures but i like this one the most if it is the i remember correctly.

[inlink]marmizo,10[/inlink] Here is my take on attempted murder. You are convicted for what you do. So it is a crime to try and kill someone. The attempt is a verry important factor. What if you kill someone with out attepting to do it. Say driving drunk I think that would be vechicular homicide or something like that. That is differant from aiming your car at some one and running them down to stop them from getting away. That is also differant then running them over then trying to kill them by backing up. Then lets say you drive away at that point it would be attepted murder. But then you get out of your car and smash there skull with a bat and kill them you murderd them. You can't be charged for a crime you didn't comit so attempted murder is a lot worse then assualt. So if you didn't have that middle ground things would be a lot worse. peopl who tried to kill people would be charged with minor crimes in stead of nothing at all so it does make sense.

Hate crimes don't only end in death. What if I spray paint the N-word move out and burn a cross on somebodies lawn. If I where just harassing them then they could only get me on harrassment charges but if It is a hate crime then it is a tougher sentance. If girls tie me to a pole (sound fun allready but it won't for long) and ass rape me with some object and they did it because I was a guy and they are tired of girls being raped and guys getting away with it then it is from hate and the crime increases. More likely they would needles up my cock and smash my balls with a hammer but You get my point. The point of the law is to try to punish people who comit these acts in the name of hate and to stop them from happening. I think it is a good idea. I think the theory is that meny hate crimes are about humilation, pain, violance and intimadation or bullying and sometimes killing. Because of that then they need stiffer punishment then if it was just a normal crime. But once a murder takes place then that is a whole nother ballgame, and I don't see A hate crime being thrown on changing much. Unless it is done by a group of people like 7 Klansmen or even the cops.

:) I have to admit I'm stoked. I got a new job today. I'm working at the same company but I will be working in the wharehouse. I will be picking and packing orders and I'm not sure what else. My ride is pissed because he was never interviewed and he had told personel that he was interested in working in the wharehouse previously. But He didn't let them know this time. I was interviewed today and Offered the Job today and I accepted it so I start on Monday. Yes I do have to take 2 buses so it will be a long trek but it is worth it. I will stilll have to wake up early but not as early. I will face new challanges and my pay will increase some so that is awesome. Yes it is a chance but it is a chance I have to take. I hope every thing works out.

On another Note I hope everyone Enjoys the New Year and does something Fun. I'm guessing I will watch MTV's countdown and that about it. I like that dog picture it is funny because the stuffed animal is riding that little dog it is often the other way around.

Today I found out that I have an interview at work. I have no idea if I should have a resume or not. I'm trying to get a wharehouse postition. I would be picking orders if I got it. I have a fealing that there are going to be others more qualified then me who may get the job. I do have experance working with the guys, but legally I can't drive a lift truck. It has been over a year since I've worked with them or drove one. I was kinda a sucky driver then so.... Plus it is way out so it is a long trek and I would still have to wake up early but not as early and I would get home a lot later and I would work 5 instead of 4 days. With out getting into it all there is some fear. I would have a lot more responseabilities and a lot more weight carring. I would be taking someone who lefts place as opposed to helping out. So it would be more diffacult. So If I get it that would be cool, but if not oh well.

Well for some reason I can't add pics the site claims it is opening the page but they are never added so oh well I give up. Work was interesting today. It started out slow where I felt un needed and then everything was verry crazzy at the end of the day. 2 more DAY TO 2 GO. i CAN'T find anywhere I want to go for New Years Eve. Seven Day Faith is playing at McKinley High School so that might be fun to go to as part of 1st night but who knows.

Well for some reason I can't add pics the site claims it is opening the page but they are never added so oh well I give up. Work was interesting today. It started out slow where I felt un needed and then everything was verry crazzy at the end of the day. 2 more DAY TO 2 GO. i CAN'T find anywhere I want to go for New Years Eve. Seven Day Faith is playing at McKinley High School so that might be fun to go to as part of 1st night but who knows.

Here are some pics I think the cats are funny.