Word around etown is that you are some sort of local scam artist. Although I haven't dealt with you personally (nor would I at this point) I have heard many people talking about bad experiences they have had dealing with you and your various businesses. I would like to encourage you to go ahead a start a journal to defend yourself, because right now you are looking like quite a jackass.

I wasn't really too interested in the issue until it occurred to me that some people are beginning to delete their online identities and thoughts because of a fear of retribution from you. Nothing makes me crazier than people having to delete what they wrote because they are afraid. It's like deleting a little piece of history.

What I do know is that several years ago, my friend Jessica (e:hodown,22584), rented from you and had some unpleasant experience where she never ended up moving in but did end suing you over the issue. I remember specifically that she won the case but unfortunately, you never paid the money. It made her really angry as she was very poor at the time and needed that money for her new apartment. Being a naive young woman at the time, she mistakenly thought that once you win a case in court you actually get the money awarded to you. That was before we realized that there is no real enforcement for those types of cases and that people like you can easily move money around. I guess you have to know an officer in order to get your payment. I couldn't help her out at the time.

It seems another friend of mine had a similar problem with you (e:maidencateyes,26637), winning a court case against you, followed by you never paying out. What makes you do that? It cannot be good for your reputation to lose in court and never pay out. Someone obviously thinks you are legally "guilty" of something if you lost twice in court. Is there more to the story that we are missing out on?

This ability for the public to expose people that scam others should not be taken lightly. It is a way for people to protect themselves from businesses that have unsavory practices. The forum I developed here was highly influenced by my mothers experience as the Director of Call for Action on Channel 4. What they do there is expose scam artists on the television news. Here the process is a little easier. There is no mediator between the user and the medium. Unfortunately, that can lead to a situation where one is falsely accused. So go ahead and defend yourself, unless that is you can't even defend your own behaviour.

to the ebay business he was running. Thanks peter for looking it up here, so we could connect it all. This is the ebay business that got closed down and was reported about in the Buffalo News as ajay reported (e:ajay,20093) a while back.

This guy has the worst feedback ever. No wonder the DA was investigating his business.

jazzman357: Ripped Off, never sent product, no reply to email or phone, no refund, Avoid!

rsknapp: Per Buffalo News, bidwell is out of business. I cancelled PayPal.

paddymimms: Major conartist, liar
,
thief and a cheat.Misrepresented item and ripped me off!

ceverinod: I have not recieved anything please me my money back or send the item

Happy 21st birthday (e:mike). We hope you enjoy it.

Sorry About No Signup Page

People can sign up for the site once again after another period of me not noticing the signup was down. Because of this I am thinking about opening the chat box to the public, so that people could leave notes like, "hey idiot, the sign up page doesn'work."

This was an exceptionally bad period of time for it to be down considering the fact that the festival brought many people to the site after seeing the banner by the main stage. I am so disappointed in the fact that I forgot to check it and make sure after I chnaged the configuration file on Friday. The error was only the difference between "signup" and "signUp." 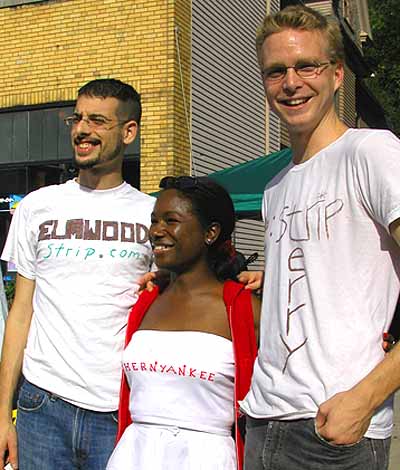 The Weather Is Lying

It's sunny now and we are going back out to the festival. It's back in full force with drummers on the main stage.

The festival is just about cancelled because of the rain. A bunch of people are still out there but the msuic has been canceled and a lot of the vendors are packing up and leaving. :(

as an alternative to Wiktionary? It is open-source, and uses non-copyrighted dictionaries. Yes, the latest words like "chillax" might not be there, but for the older stuff, it is quite complete.

In an effort to keep with the comunity based media idea, I have switched the elmwoodstrip offical dictionary from the commercial dictionary.com

to the open source wiktionary.org

Wiktionary, like wikipedia, lets users define their own entries which are editable by others. There are some rules so check out the site for details. I added chillax [dict]chillax[/dict], as coined by Jesssica Ho in 1993. The definations are often different from dictionary.com e.g. geek [dict]geek[/dict] is defined how it should be and not as some circus sideshow freak that eats the heads off of chickens. Some definations are very well written. All can be very well written e.g. appearance [dict]appearance[/dict]. Test it out if you get a chance.

You can finally upload multiple media files!! Thanks to (e:holly) for the suggestion, I had been planning it for a while, I just hadn't had the time. Right now you can upload up to five files in one swoop. Simply choose the number of media files you want to upload in your journal write box and then browse for them. When you are done, click th eupload media button. You will get feeback if there are any problems. Email me if you find any problems.

I received this information via email the other day and thought maybe some of you would be interested.

There is much happening in regards to Friends of the Ancient Forest and Zoar Valley. The much anticipated DEC Zoar Valley Master (UMP) Plan is soon to be released followed by at least 2 Public meetings which we hope all will attend. We will send out email alerts for these. You are making a difference and the state is listening, if we follow through Zoar will recieve protection.

Zoar Valley Hike and Cleanup: Meet this Saturday August 21st at 11 am in the Springville ParknRide(rt219 and rt39). We will hike from Forty rd. parking lot up to the Big Falls on the South branch of the Catt. There has been many folks enjoying Zoar this summer and a little attention along the creek would make the Zoar Spirits smile. If we get hot enough cleaning up along the way we may reward ourselves with a little swim so bring something to swim in and a lunch. call us at 716 592-7547 if you need more info.

South Rim Hike: Meet on Saturday Sept. 4th 11am Springville ParknRide for an upland hike of Zoar with spectacular views. Come and enjoy the flora and fauna on the rim. Bring a lunch and camera for the views. call us at 716 592-7547 for more info.

Title: "In Search of the Last Primeval Forests of The Northeast"
What: Hayes Lecture, Distinguished Speaker Series
Time: August 24, 2004, 7:00 pm, Buffalo Museum of Science,
Cost: FREE
Description:
Bruce Kershner, National Old Growth Forest Expert, Author Towering, cathedral-like ancient forests were thought to have been virtually wiped out by centuries of cutting in the Northeast. But Bruce Kershner, old-growth forest authority, forest ecologist, and author of 12 books, has proven this to be a false conclusion. He has discovered 200 old growth forests in Eastern North America where previously no one thought they existed, even in Manhattan and next to Niagara Falls Casino! These primeval forests are revealed to the public for the first time in his most recently published book Sierra Club Guide to Ancient Forests of the Northeast.

Bruce Kershner will lead us on a stunning visual tour of the largest, tallest, oldest, and most bizarre trees in the Northeast States, with a special focus on our region. You will marvel at fantastically gnarled cedars up to 750 years old, colossal oaks and sycamores up to 24 feet in girth, Western NY's Gallery of Giants with the world's tallest elms and basswoods, and Pennsylvania's Forest Cathedral Grove with white pines approaching 200 feet tall. He will show you how to visually identify if a tree is old growth, and how to find ancient forests. This presentation will permanently change the way you see and appreciate the forests of the Northeast. Local Landscape artist Thomas Annear has donated a limited addition print of a painting he did in Zoar from his recent showing at the Patterson Library in Westfield NY to help raise funds for FAF.

This print will be available at our hikes and events for viewing and purchase. Check out Tom's web site at

and support this important local artist and help save Zoar at the same time. FAF sends a warm thanks to Tom for his generous donation of talent and heart.

This is an important message to our current administration that i have just read and signed.

We are trying to reach 25000 signatures, and we need YOUR HELP!

In 2001, the Bush administration promis
ed
to uphold the Roadless Area Conservation Rule to protect our last wild forests. But guess what Bush and his administration have just reneged on this promise. Unless we act quickly, 58.5 million acres of our national forests will be at risk from destructive road-building, logging and drilling.

Please help today and sign this petition to submit your public comment in opposition to these changes:

Public comments are a great way for all of us as citizens to express our concerns for our environment, and to hold our government accountable.

Help send a clear and powerful message that we will not tolerate the administration giving our national forests away.

Once you have signed, help even more, by telling your friends and family to sign as well!