We are making progress. Still more to get done but we need (e:Uncutsaniflush)'s blisters to heal a bit...

Here are a couple more pics of our new closet: 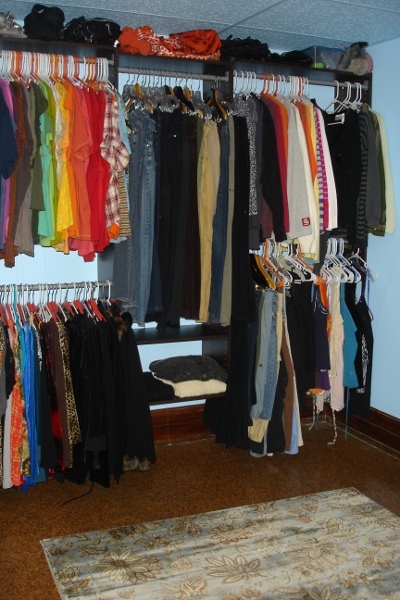 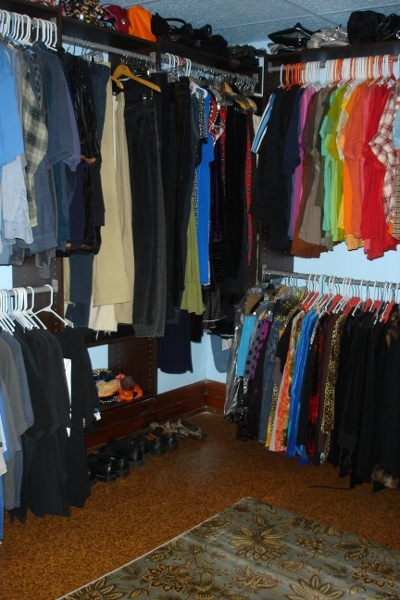 I am so jealous of this!

We are turning a smaller back bedroom into a big walk in closet.

Here is a snap of how the room looked before (why would we want to improve this wonderful room?): 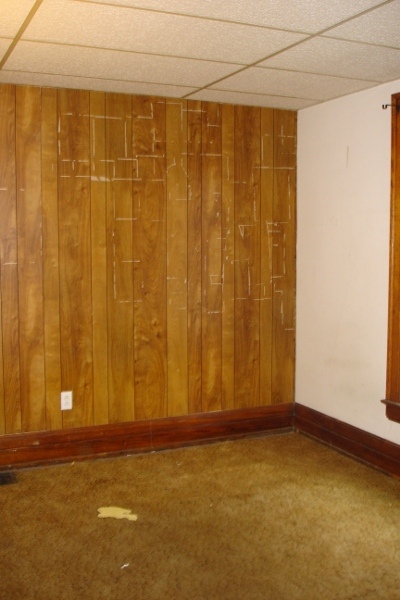 And here is that same corner in the room after being painted with 75% of my clothes on a Martha Stewart starter kit closet with additional shelves for the top: 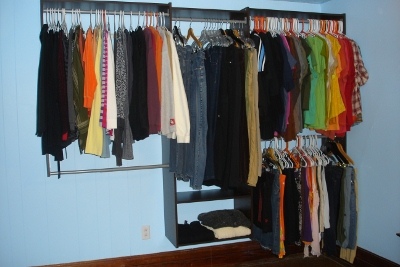 We still have lots to do in the room -- poly the shoe shelves, put up another kit for the rest of my clothes and (e:Uncutsaniflush)'s clothes, get a few hooks for belts and scarves, get a full length mirror and hang it, get some dressers and maybe an area rug....

But i am so happy i could cry!!

That is awesome. Nothing beats a walk in closet/dressing room.

I have been avoiding the dentist because of my huge fears. I know, everybody says they are afraid or don't like the dentist. I think i have more of an anxiety related thing and perhaps a phobia. The thought of it, and those smells, well, they make my skin crawl, give me nightmares, and i can't think of a time i have been to a dental office and not cried. No, i do not mean a few tears, i mean, big time ugly cry and sobs. It's embarrassing.

Saturday i cracked a filling while eating a peanut at my friend's 2 year old's birthday party.

I even have another tooth with a chipped and missing filling that happened when we were in Pittsburgh back in the spring.

The dentist i had been seeing doesn't take my insurance.

So, i got online to look at my unions benefits page to look for someone new.

I also had a vague recollection that (e:Paul) saw a dentist that takes his insurance (e:Paul,49698) and since he and i are in the same union, i reckon they take mine, too.

They do.... so i called yesterday and they had a cancellation for today. I took it.

In the meantime, i got online looking for something to help me. Yes, (e:Uncutsaniflush) there to hold my hand is nice, but he can't sit in the damn chair for me.

that really hit home for me. The Common Fears section helped me identify exactly what it is that i am scare of. The Handle Me With Care form helped me to be able to communicate better with the staff. And i've only scratched the surface of reading the site. I think, just seeing it there in print on the screen has helped me not feel like my feelings should be diminished by others. It's been a quiet empowerment thus far.

The appointment was a cleaning and check up, because they always do that first, but i got the best hygenist ever. So patient with me. She let me rinse and spit out all the grit from the cleaning whenever i told her i was feeling icky about it.

The dentist allowed me to ask him for specific methods of communication that were helpful to me. To be able to stand and look him in the eye and have him point out what he was talking about on my x-rays was enormously satisfying.

I have no new cavities. However, i have a mouth of about 75% fillings and 2 are old and broken and need crowns.

i hate crowns, too, (e:Paul), but i don't have much of a choice. The tooth has so many little fillings on it, it has become one big filling with barely any tooth left.

I have a couple of crowns. One of them is a bad example because it flares up from time to time because the idiot dentist that did it did not get all of the root when he did the root canal. The other one took a while to settle down, but it did once the permanent one went in. But my teeth are so temperature sensitive anyway...

Good luck with yours, (e:Paul). Are you still going to the same place, Advantage on Elmwood by Kenmore Mercy?

I hate this crown thing. I am currently in the process of getting a crown. It is a nightmare. You go in and they saw/drill off your tooth. Then they put a temporary fake took on top while you wait 2-3 weeks for the real deal to come in from the lab. The temp one sucks. Mine is sharp, stuff gets stuck under it, its super temperature sensitive. This is my first crown. I hope the real one is better than this. I go back April 1st.

Good luck on it all.

How I (We) Got To Buffalo

When (e:Uncutsaniflush) and i were deciding where we would begin the rest of our lives, we decided that it would be better for me to move to Knoxville rather than him move to Hamilton.

His only living relative in North America, his maternal grandmother, was in a nursing home, with congestive heart failure and increasingly reverting to more Polish and less English. Unlike this area, there were not a lot of Polish speaking residents in Knoxville. Moving her could have been fatal.

In Hamilton, all i had was a crappy job working for the family business, my cat Diamond and a rented 1 bedroom apartment.

It was a bit of a no brainer.

Our reasons for being in Knoxville were buried along with her. Yes, we had friends there, we were settled and content. But the drive to visit my family was long and at the time, i didn't drive at all.

We began to do some research. We wanted to move back North, but where? To Canada? And abandon the lengthy expensive process of getting my Green Card?!?

So, one day back in, well, it must have been late 2003, we were driving from Knoxville to Hamilton. We were on the 190, heading towards downtown. I think we were probably by the Smith & Fillmore exit, nearish the Tyson plant.

I elbowed (e:Uncutsaniflush), screwed up my face in a comic sneer and said, "ha ha ha... why don't we move to Buffalo?!?!"

Puzzled at my obvious sarcasm, he asked "Why? Why not Buffalo?"

So, on our way back from Hamilton to Knoxville, we paid the city a visit. And i ate my words. People were so friendly and kind to us. We saw that Buffalo is not all blight. And has wonderful architecture.

(e:Uncutsaniflush) did some online researching.

We came again in spring and were impressed at how the city came alive.

So, we worked on our house. Got it ready for sale. Listed it. Went away for a weekend to Kalamazoo to my cousin's wedding. Returned with a few messages from the real estate agent. Someone was interested. And wanted a quick sale.

A few short weeks later, we were here, our stuff in storage and our Prius packed to the rafters full of things we might need until we find somewhere to live.

We lived in the Lennox Hotel until i couldn't take it anymore, i needed an address....

Not sure if he discovered (e:strip) while we were there or when we got our first place over on Summer & Linwood.

I think i joined (e:strip) after going to (e:Ajay)'s going away party.

If i could live anywhere else i would chose to live in....

Funny, but a lot of where i would live would have to do with what i could afford.

The time i spent in Leeds was one of the best times of my life. I had a crappy low paying job, worked 7 days a week most weeks, but i had lots of fun. I met loads of interesting people. During holidays, i was able to head off into the corners of the United Kingdom and explore. At the time, i felt i didn't need huge wads of cash and posh digs.

However, i think my favorite city to live in would be Toronto. I have spent more time there and feel like i know more about the place. I like it's big city feel without being so big i feel lost. But i would need to be making more than i make now to be content because it is an expensive place to live.

I would live anywhere that (e:Uncutsaniflush) lives because i love him. Damn, i moved to Tennessee to live with him, didn't i?

Yeah, Paul, every time i go to Toronto, there seems to be a new tower block. Particularly going North. Vaughn has a mall now. With a Bass Pro! Egads.

Funny enough, since i was born and raised in Hamilton, i have always thought of it as completely separate. But when (e:Uncutsaniflush) first visited me there, he thought if it as the outer outer burbs of Toronto, a commuter town because the GO Train ends (or begins, in my opinion) in Hamilton.

I still love the city proper, though. Even the sketchy areas. And i hear that the racism issues are getting worse....

Recently, we have been watching all these documentaries on England. I wish I could live there in Edwardian times (pre war) and be rich.

Does it seem to you that toronto is expanding an extreme pace. Everytime I go it seems bigger and different. At some point those high rise condos are going to stretch all the way down to Hamilton.

(e:Jason) posted details of (e:Joshua)'s visiting hours and memorial service on facebook for this Friday (2-4, 7-9) and Saturday (2pm) in Jamestown. I am not exactly sure when i am going, but i will be. If anyone wants to go, but can't because they don't have wheels, send me an email (i forget to look at the messages here all the time!). I will have space for 2 or 3 peeps in my prius....