I wanted to come to the party this weekend. I really did. I was even going to bring the rice cooker for you, (e:Libertad). I totally need to call you so i can give it to you!

I probably would have dressed up as Eeyore, a bit of a copout since we have a full sized fuzzy costume. Last year i went to gay bingo with Kirsten in it... (e:LeeTee,25685).

But alas, my day, particularly my morning was one of hell that found me wandering Elmwood at 6.30am, with over 30 minutes to wait for a bus and the new information that Spot does NOT open at 6am on the weekend, despite what the giant sign says and what the moron on the phone told me the night before when i called. Sorry, venting there...

My boss was late so i was not only 40 minutes early (damn buses, i was only that early so i wouldn't be 5 minutes late!), but i waited 45 minutes for her to show up. Then, she asked me to work until 6. With someone that i might as well be working alone. Some people will never grow up.

Instead of working 5 hours as scheduled, i worked 11... and then there was the bus ride ((e:Uncutsaniflush) was working, so it would have been me only anyway, folks) home so at 7.45pm, i was finally home, 13 hours or more after my day began and exhausted.

It's been a weird series of events that has kept me from being at an (e:strip) party these days... mostly just timing. I won't let that jerk that told me i wasn't welcome from going... if i could get my shit together enough to get there, that is.

In the meantime, here's some Rowan... and one of my favorite not Mr. Bean skits... "welcome to hell".

Nope, (e:Jenks), not anonymously. To my face. At an (e:strip) party a while ago. I think it was supposed to be some sort of fucked up joke. But all it did was make me cry and stay away for a while. But now, i realize i do not want this asshole to have any more power. So the big middle finger to that person. I will show up... someday, when i can get my shit together. ha ha ha!

I promise the rice cooker has your name on it, (e:Libertad). Heres to better days for everyone! :O)

That doesn't sound like a very fun day. Don't worry, I'm not cooking much rice right now. I'll be happy to wait for whenever you might be driving by my house....just call me before you leave to see if I'm home.

"I won't let that jerk that told me i wasn't welcome from going..."
Wait a minute- what???? Someone said you're not welcome? And I'd like to know exactly whom they were speaking for- since I'm sure it was done anonymously.
Jerks.
Would have loved to see you. :)

Returning from a vacation is exhausting. I need a vacation from my vacation.

Being able to do laundry before leaving, while chillaxing on the last night makes the unpacking process so much more simple.

A guest suite in a generous friend's house is such a pleasant and far more homey way to be in a city you once lived in. A hotel would make it all seem so wrong, so foreign, as though it is and always be a place to visit, not somewhere once lived. Thank you once again, Linda.

The obsessiveness of not being without something has turned my purse/backpack into an old lady purse that can make multitudes of everyday things appear from it. Except dental floss. And that was only a test. Thanks, Kim, for proving my purse does not hold everything, but now has a mini dental floss in it.

Cemetaries are beautiful places. Even when someone you love is in one.

Often, it is those that are humble in their skills have the sharpest. Thank you, Brandon, for what you added to my vacation and my life. Not sure you will ever understand how much the simplicity of what you do when you are brave enough to face it does for me. Thanks for getting up there a few more times and allowing me to get it.

Some people never change. It's amusing to rely on the insanity of a select few.

It's so mindblowingly amazing to have friendships that can pick up where they left off no matter how long it has been since last contact.

Brunch is a good meal. Sunday brunch is even better.

I miss where i used to live. But up here will always be home. It's good to be home.

Wow - I just got back from vacation, too, and it's funny how many of the exact same thoughts I've had recently. Especially the bits about friendships and having an old-lady purse. :)

"It's so mindblowingly amazing to have friendships that can pick up where they left off no matter how long it has been since last contact." That is such a great feeling.

I know you are missing the colours, so i thought this would be nice for you. Let me know if you want me to mail you some... ha ha ha. 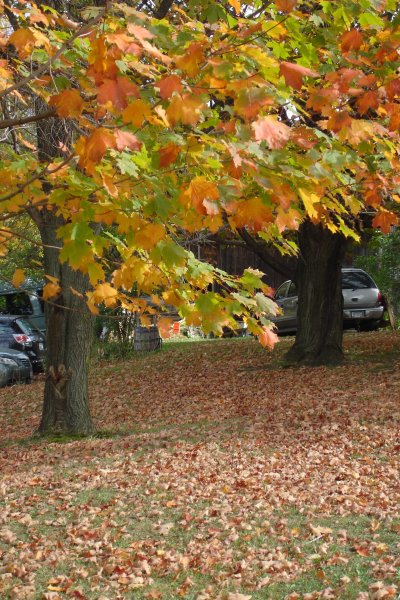 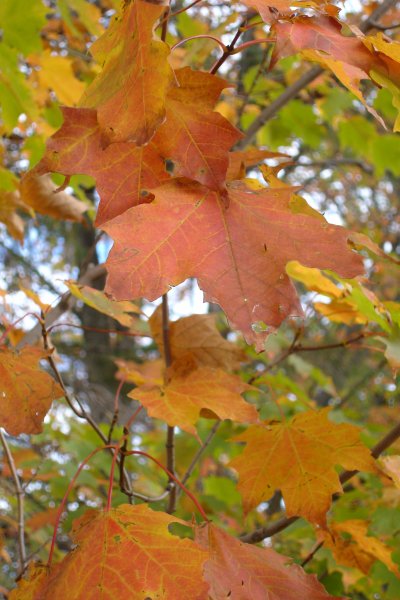 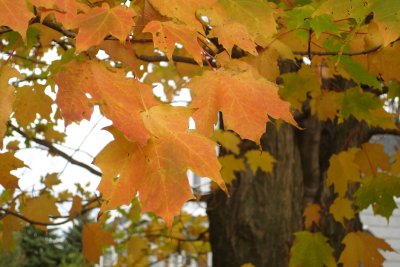 Oh, where are these pretty trees? The ones on Linwood and Summer are living up to their name and are still green.

Anyone want a rice cooker? We have an extra one.

My sister in law gave us one for xmas a few years back. Then, two years later, gave us another one. I think she forgot she already got us one. The second one has been sitting in a box for a while until the other day when i decided to get it out and try it. It's a bit bigger than the first one she gave us... so we are going to keep number two.

Anyone want the number one? Free. Email me and we can arrange a drop off or pick up. 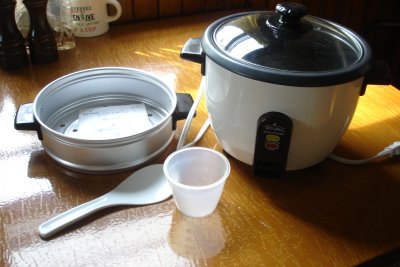 rice, rice baby....are you coming to the partay?

Just got your post-it. I didn't know I had any. I will take the rice cooker. It looks nice. Call me when you get a chance.

Oh, and thanks for the heads up on rice cookers, (e:Tinypliny)! If my number 2 rice cooker ever breaks, then Tatung is the rice cooker i will look for.

Oh, and another thing i forgot to mention. We always use filtered water for rice (yeah, i am just so suspicious of tap water these days) and i have found water from the fridge is too cold. So, i use room temp water (i keep filtered water in the kettle) and the rice cooker does that thing it does a lot faster.

(e:Jim) you're indeed right, that method is supposed to be the easiest. So many people have told me this, that rice is simple, you included! But, i have bad luck with rice. Seriously, i can do everything exactly right and it will burn or i cannot get the heat of the electric stove burners we have to maintian the correct temp to keep the rice at a simmer. Or, it takes 2 hours. That's why i wanted a rice cooker. Give me a little rice confidence... because other than rice, i consider myself a pretty good home (as in not a chef) cook.

So, (e:Libertad), if you're still interested in the rice cooker, it appears as though (e:chaibiscoot) forfeited it. Let me know, and we can arrange something! :O)

Hi Lee, I think Libertad should have it. I really have no need for it, I was just being greedy for new shiny things. I make rice every single day and find that it takes too long in the rice cooker. (e:jim) is right with his method - it's quick and easy.

If you are ever in the market for a rice cooker, then I would STRONGLY um VERY STRONGLY recommend Tatung. (And, no, I don't own stock in Tatung.) It's just beats all the rice cooker competition hollow and makes *perfect rice* in 20 minutes flat.

For Basmati, with the Tatung rice cooker:
Take 1 cup rice + Add 1.2 cups water with the rice. Add 1 cup water outside. Shut the cooker and 20 minutes later --> the most delectable rice ever!

Ha. I have wanted a rice cooker for ever, but chaibiscoot gets it. That's ok because I finally figured out how to cook rice and it isn't that hard.

Today is mine and (e:Uncutsaniflush)'s 6th wedding anniversary. We met, in person, for the first time on Friday, 6 October, 2000 and were married exactly one year later. We were married on the deck of the house we lived in the first 3 years of our marriage, and most importantly to me, the place i realized i love this crazy bald head of a man. He rocks. I wouldn't trade him for anything in the whole wide world.

I just was over in Canada for a 50th Wedding anniversary celebration. Given the opportunity I think you guys will make it!!!

(e:lilho), there is indeed hope for love. There is that someone out there for you, you're a catch. :O) I found someone when i stopped looking and just started enjoying what life had to offer.

Congratulations!! Hope you have 600 more years!!!!

I hope that your anniversary is wonderful! Congratulations:).

I've been using the nickname LeeTee since i got married. Thing is, my real full name is Leette and so few people can pronouce it when they read it and i get called LeeTee when they do, so why not just go with it. Most people call me Lee, since i hate hate hate the name Leette. And, now that my last name starts with a T, i figure, LeeTee is even more appropriate.

Today, however, i got myself a new nickname. Last night, two of my co-workers were sitting in the backroom, doing the closing stuff. One had met me and the other hadn't. The one that hadn't looked up at the schedule and asked the other, "Who is this Lettuce person?" When they told me that shortly after arriving and introducing myself to the co-worker i hadn't met yet, i almost burst a lung laughing. So far, it is my favourite nickname. I want them to call me that. I want a name tag that says that. But the manager said no, my name tag has to stay boring -- "Lee".

Today was my first official day at work "on the floor". All i had done before that were training exercises and a bit of re-stocking. And would you believe it, my very first official customer ever was one of our own. An (e:peep). Oh, (e:Enknot), you lucky, lucky man...

I'm TOTALLY calling you 'lettuce' from now on!

no wonder (e:enknot) is so pretty.