Yesterday, i got a call from my mom while i was driving to work. Her calling at that time of the day.... well, i just got the feeling it was bad news. My first thought was my Nana. She is in a nursing home, and pretty much given up and "waiting for the good lord to take" her. Unless you have "a coke" at the end of that straw, she ain't eating or drinking it.

When i pulled into the parking lot at work, i listened to my mom's message. They had just gotten home from the vet after having had to put their dog, Ralphie, to sleep. Poor old dog. He hadn't been doing well lately, either. My dad, not surprisingly, is not taking this very well at all... in fact, i am surprised he agreed to put him to sleep.

I have been saying for about 10 years now that my parents have been staying together for the dog. They sure as hell would not have stayed together for us kids.... but, i wish they hadn't. In fact, i hope they can be there for each other when they are sad, but that so not very likely. I just hope they finally decide they do not make each other happy... and know they no longer have to stay together for the sake Ralph.

Here's a pic of the little mop, doing one of his favorite things: laying on my dad while my dad's feet are up on his lazyboy. 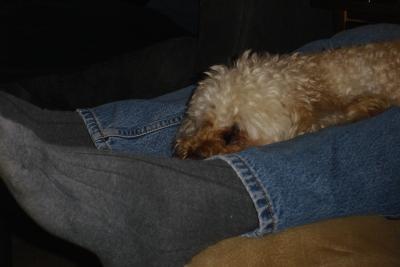 Awww, sorry to hear it Lee. Until I have kids to worry about, I think losing a pet will be about the saddest thing that can happen to me. (Aside from losing my parents, which simply can't/won't happen, so i don't think about it.)

But I know that 'pit of the stomach' feeling that you get when the phone rings at the wrong time... I woke up the other morning at 6 to find a text from my brother from midnight the night before, that just said "come home and fix dad's thumb". WHAT?! My dad's hands are his livelihood... all i could think was "oh shit, did he cut his thumb off?" or break it? or what? I tried to tell myself that if it were REALLY bad they would have called. But then I remembered that when my mom was in the ICU when I was away at school, my dad didn't tell me because "didn't want to worry me during exams".

So I waited til 730am and called home... turns out he was putting the dishes away and cut it on a slicer in the kitchen drawer. Totally no big deal. But yeah... Those phone calls suck.

Sorry, that is very sad.

That was sure one cute puppy.

Ours is cracked because the recycling people just throw it after emptying it. I would have thought this would be a simple quick task. I was wrong, and for the first time, i found myself hating Buffalo... really really hating Buffalo....

First, i did a simple google search and ended up with a government page.

I printed out the list of places in which i could pick up a bin under the Where Do I Get A Bin? Headline.

I called City Hall. It rang until my phone hung up. I called again. I was told, "i don't know... uhm... we don't have any" by a very impatient woman on the phone. So, i will not waste my time to go downtown and try to find parking, pay for it and try to find the right room in city hall and have them be out of bins.....

Time to try next place: Parkside Community Association    2318 Main Street    851-4324 I passed it, then turned around, found parking, got out and found the wee store front. The woman would not unlock the door. She shouted "WHAT!?!" from her desk and when i would not go away and asked over and over "Do you have any blue bins?", she came to the door, would not open it and spoke to me through the crack between the door and its frame. Yeah, well, you know, mid-morning and overweight middle aged white women are both very risky. I was told "we ain't got none!" and she sent me to a store "a few up", pointing vaguely northward.

That place was a bodega and the clerk looked at me like i really was a risk, or crazy, and told me to go to "Gloria Parks". When i asked who that was, a street corner bin supplier?, he did not laugh, but said, "it's up there" and pointed north.

After passing it a couple of times, not realizing it was a community center and was indeed on my list (COPS [WTF does COPS mean?] Gloria Parks    3242 Main Street    851-4112), i found yet another parking spot, walked to it and tried to get in. I buzzed a buzzer and was told i was buzzing the wrong one. I was eventually let into the building and asked the question i wanted to ask after i was searched and had to show i.d. and sign in. I was told they were "all out" and it was suggested i "go to flare". "Where is that?, i ask. "Leroy" was the answer.

I consulted my list to see that yes, that place, too, is on my list, (FLARE    302 Leroy Ave    838-6740) so i called and got voicemail. I left a message and drove there, since i didn't think it was too far away. When i got to what looked like an abandoned firehall, the doors were, of course, locked. I tried to find a buzzer but could not. I tried to open the front door and knocked, and when someone came nearish the door that woman just waved me away. When i said, "DO YOU HAVE BLUE BINS?" through the door, she walked away. I waited for a few minutes and went back to my car.

Next nearest place: Ken-Bailey NHS [WTF is NHS?] 995 Kensington Ave    836-3600. I drove the wrong way, then by it 2 times, not only because, at that point i was half expecting some dude in a van, but because i didn't even think it would be a Habitat for Humanity. It was. And it even had a parking lot... with available spaces! Gasp! I park. Go to the front door. Yep, locked. I buzz the first buzzer. Nothing. Second one. Someone comes and i ask, "Do you have any blue recycling bins?" through the closed glass doors and i am told to try the other buzzer. I try the other one and wait. Nothing. Yes, in that location, there are 4 buzzers. On the last buzz, someone comes to the door. I take a deep breath and ask that question of the day. And i get.... "yes, we do.". And i almost fell to her feet to kiss them. I am asked if i mind being searched and showing i.d., and my reply is, "no, i do not mind, but only if you really do have a blue bin for me". Puzzled, but polite, she searches me, my purse, inspects my i.d. and watches as i sign in. She asks me to sit and she will get me one. I sigh and thank her and tell her that recycling in Buffalo is hard earned and give her the whole story. She comes back with 2 bins "for all your effort". Nice woman. Or maybe i just think that because she had my coveted blue bins.

So, what i thought would take 30 minutes took over 2 hours. I still sorta hate Buffalo... and i think if these 2 ever break, i will send someone else to get them, or just stop recycling. Yeah, i am that annoyed.

Wow - that was tough. Someone stole my bin ages back tinypliny,41470 There is a recycle-bin handing-out centre on the corner of Delaware and Allen called Homefront. I think that might have been much closer than these other ones. Its last on that list. I am not sure whether they actually have the bins though - I should check them out.

Wow, you have some perseverance woman!

I have just put my shit out in plastic bags for the last few years now. My blue bins continually disappeared before that. The men still take it so, whatevs...