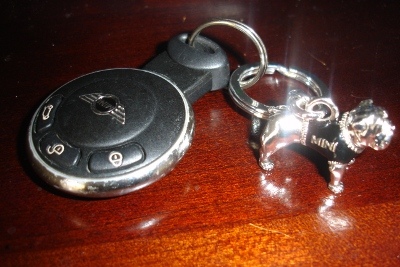 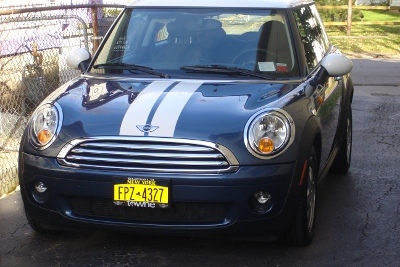 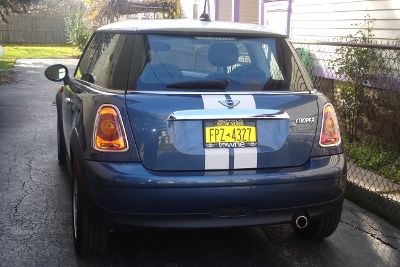 Congrats. Its so cute. I have a bumper sticker for you.

I pick up my MINI on Friday

You can totally have mine.

(e:Paul), are there any estrip bumper magnets left? I would love a new bright shinny one for my "new" car!

Tiny -- of course. I will try to remember to bring my camera and perhaps (e:Uncutsaniflush) can take pictures of me officially getting the "keys" (it's a push button start).

(e:lilho) -- i wanted the dark orange. But i would have had to buy a brand new one. Mine's a used 2009 (with only 11,200 miles on it!) and is Horizon Blue Metallic with a white roof with sunroof and 2 white stripes down the bonnet.

The day before yesterday, (e:Uncutsaniflush) was on the way home from work when his Prius showed a big giant red exclamation point on the wee screen. Turns out that's the "pull over right now and tow this mofo to the dealer" light.

Since it is a first generation Prius (2001) that is way out of warranty, we took it to our mechanic (Russo's Auto

they do Prius' and we totally trust them!) and left it with them overnight so they could look at it first thing in the morning.

Yesterday, they gave him the bad news. The hybrid battery systems. Need new hybrid batteries. Along with other needed repairs, the estimated cost would be in the $5000(+?) range.

Good thing we didn't get the exhaust system replaced and have the hoses for the a/c repaired and then have this exclamation point issue!!!

So, our old faithful first Prius is dying. Feels a bit like a funeral. (e:Uncutsaniflush) bought that car before i could drive, back when we were in Knoxville. I think we both liked the fact that it has NY plates but says "Toyota Knoxville" on it.

Now begins the process of new/new to us car shopping.

We went to Paddock (where i got my used 2006 Prius) because we knew they had a used Prius and a couple of used Minis then to Paul Herman Motorcars before i had to speed (yes, that was me doing 65mph on River Road, a 40mph zone!) off to work.

Today, we are taking my car in to the shop to get an oil change and get snow tires put on.

Although i am strongly encouraging (e:Uncutsaniflush) to go get the car of his dreams, he keeps telling me he is more than happy to take over my car.

Understandable since the 2006 Prius is a very nice car.

But it's not my dream car. I may have the chance to get it now.

What if all these years of dreaming of having one and i am disappointed? Does this happen to everyone when they are about to go and do something they think they really really want? Am i stressing nervous and excited for nothing? What if the used one is gone already? Can we be cash poor to get a new one? Can it really be mine?

Go For it.... If you don't have the money for it... Look into a lease.... Now granted with a lease you don't own the car and what happens if damage is done to it I have no idea.... I don't know if when they did the lease thing if it was just for a limited time or what the details on millage or what the options are once the lease time is over for buying it.... Turns out (before (e:strip)) my dad leased a car and had a long commute so when the time was up it turned out to be cheaper just to buy the car.... But again this is only a plan B I say go for Plan A... And hope you get a great car.....

Today is the anniversary of the day we landed in Buffalo, to make a new home.

11-04-04 it was blowy and snowy and despite both of having grown up in the rust belt, we wondered why we left the warmth of Knoxville, TN for this down on its luck city.

We stayed at the Lennox Hotel for a few weeks... until i needed a permanent address.

Moved into the Mayflower because they were willing to give us a 6 month lease.

The moving company mislead us when we signed with them -- 2 to 4 days to get our stuff was from the date of when they bothered to go get it, not from the date we called to say we want it. My parents lent us folding chairs and we made do with the things we had fit into our car. Wooden crates and blow up mattresses....

As much as our recent trip to Knoxville tempted us to want to move back there, Buffalo is in our blood now. It's home.

I'm glad you guys moved here and now see the amazingness that is Buffalo!

heh, I had to look up where Knoxville was. I kept spelling it knocksville!

Glad you like Buffalo.... I know if I lived in TN I would have said the same thing as everyone else... Also glad you find it home....