not the first pickins from the organic (e:Uncutsaniflush) & (e:LeeTee) back garden, but thus far, the most prolific. 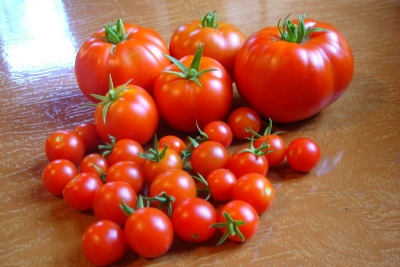 growing up, i ate them on toast (rye, caraway rye the most coveted) with a sprinkle of salt, or much to my gran's dismay, right from the vine with a salt shaker hidden in my pocket.

winter tomatoes were hard and less flavourful in those days. they were from some far off land of unknown origin. now, we have hothouse tomatoes and the government insists on knowing where they are grown. a pale comparison, but for those of us with a tomato obsession, it's all we can do...

but i have to say, the biggest most evil of blasphemy are those people that put fresh tomatoes in the refrigerator. why, i beseech you, why!!???! ruins the texture and dulls the flavour.

that is, of course, is mere the humble opinion of a former foodie...

They look so delicious. My grape tomatoes on my salad from cafeteria today were horrible.

You are so right. There is nothing like a fresh tomato. with a little basil, olive oil, lemon juice, salt and pepper- delicious lunch. Or just straight with a little salt. yummm.
And those hard pink things that come in salad bars etc are not even close. We've always called them styrofoam tomatoes. I can't wait to grow my own, but I guess it's too late for this year.

And yes, I agree about fresh tomatoes belonging out of the fridge. But I didn't use to keep them outside till I accidentally left them out for a few days a couple years ago and saw how awesome they ripened and tasted!

And what do you think about my latest proposal?

Wow those are totally perfect.

Don't continue reading this unless you're in the mood for yet another one of my bitching & moaning sessions. Hopefully, it will be short...

My doctor wants me to see a nutritionist and a opthamologist.

Or, so i thought.

I found out today that i must be stupid, because today's conflicting information "is exactly" what i was told last time. I am NOT covered. Even though i understood that i was. I understood that my diagnosis opened a few doors to see specialists i was not covered for before it. Such is not the case. Diagnosis is not relevant.

Ophthalmology -- I am covered for an office visit... but... ready for this... not the exam. WTF? So, if i want to go and talk to a receptionist at a doctor's office, i can, but i can't have the doctor examine me?

Nutritionist -- there isn't one in the Buffalo area that is in network unless i go to a Diabetic Education Class at a Catholic Health hospital. Four 3 hour classes, most of which interfere with my work schedule, of course. To top it off, i do not have the correct referral and need to get back on the phone to be on hold and explain to someone else what i need and wait to find out how i cannot get it.

Grr, Lee I'm so sorry you're dealing with this. And THIS is a prime example of how healthcare is broken in this country. You, or your job, pays through the nose to give you health insurance. And you, as opposed to many people out there, are trying to do the right thing. You are trying to do what is good for your health, AND you are trying to check in advance to make sure it's all kosher with your insurance company. (as opposed to just seeing some doctor who isn't covered and then refusing to pay, etc). And they make you jump through hoops. Why don't they realize that if they would make primary, preventative care accessible and affordable, they would save so much money in the long run?? LET everyone see a doctor and get their blood pressure and sugar checked. So you find some hypertension and diabetes. Better to find it and treat it *now*, when it's a matter of blood pressure pills and fingersticks- rather than wait until people need cardiac bypasses and their legs amputated. But noooo. They don't see that spending $100 here saves them thousands down the road.

It's all so frustrating. I really hate it all too.

Bitch and moan all you want, (e:leetee). you have to relieve the anger, frustration, sullenness and other byproducts of a broken system somewhere other than on the phone with unhelpful CSRs. I wish you mighty powers of patience and endurance.